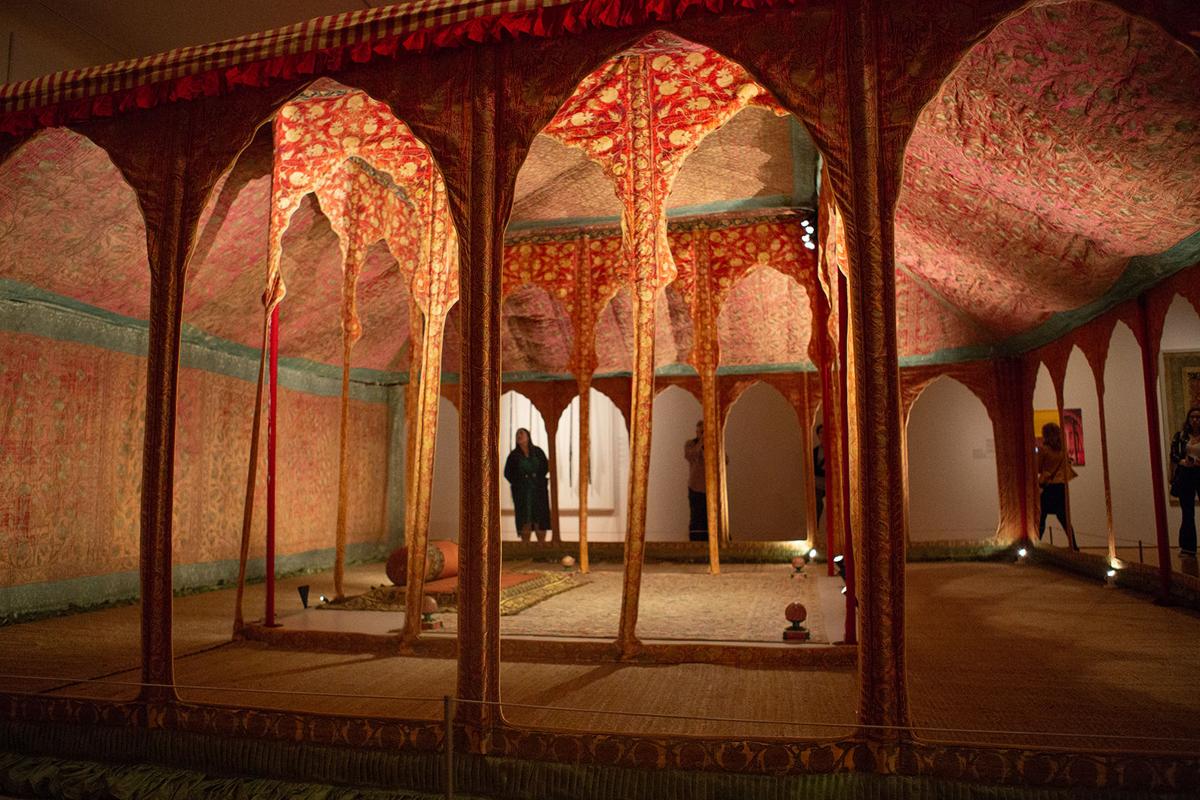 The Lal Dera, or "red tent", was a portable palace for rulers of the Mughal Empire. 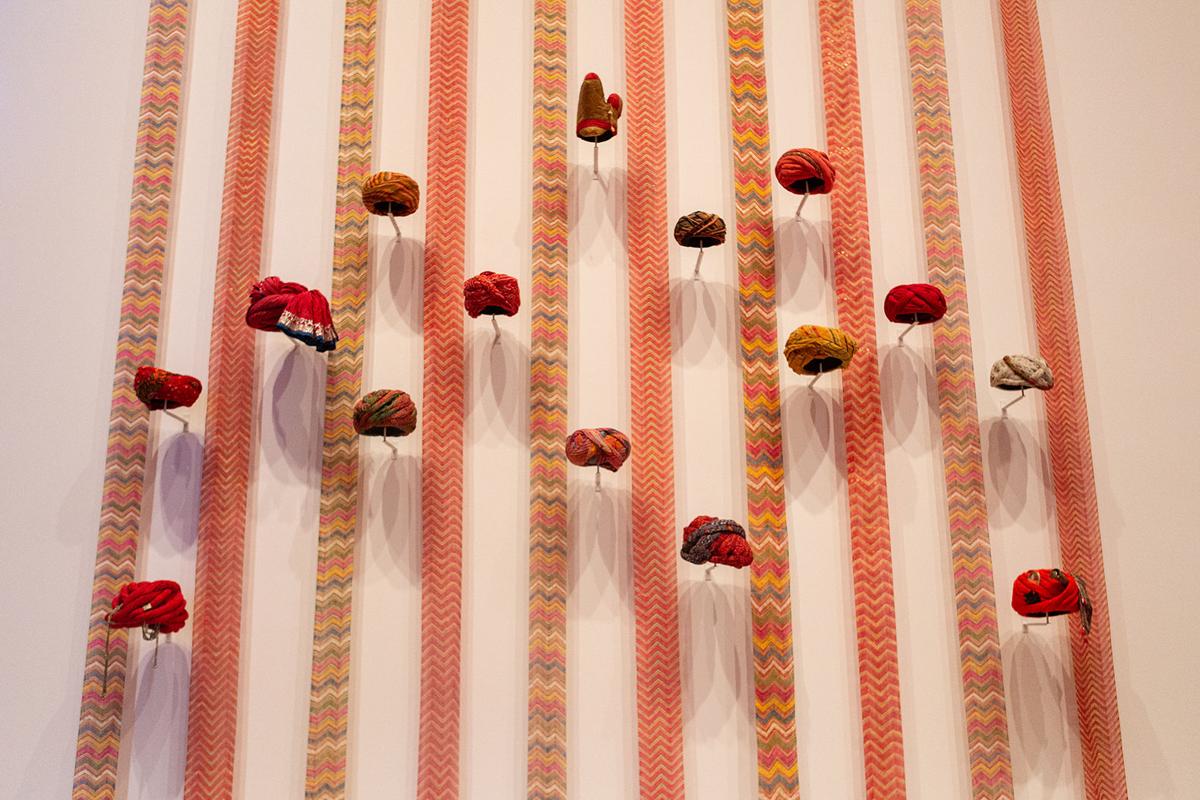 Turbans displayed on a wall with the fabric they are made from. A turban is wrapped out of roughly 60 feet of cloth. The styling of a turban depends on the wearer's social class, any ceremonies occurring, the current season, or other factors. 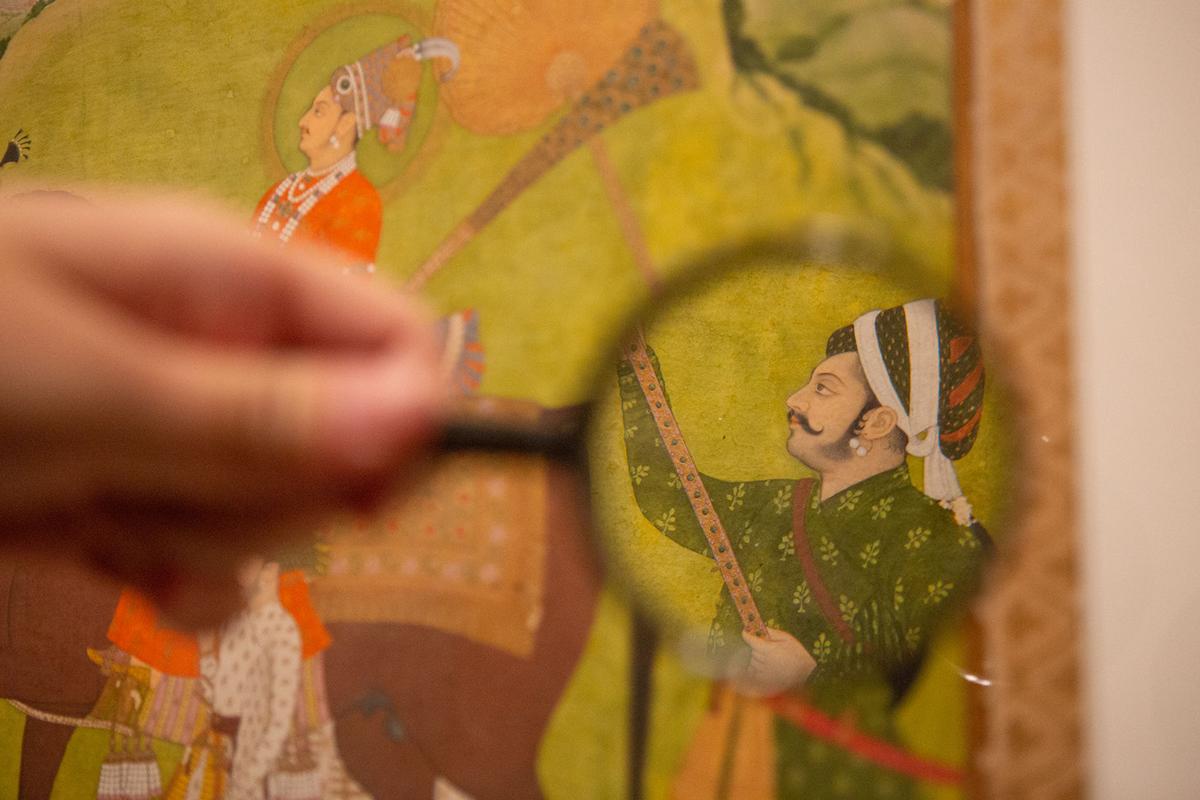 Much of the art in the exhibit is so detailed that it requires a magnifying glass to fully appreciate it.

India is one of the oldest, populous, and most unique countries in the world, with a history dating back to 2500 B.C. It is populated by about 1.35 billion people and filled with wondrous architecture, colorful textiles, and delicious food. Yet, especially in the United States, the general knowledge of India’s culture is often limited. For the next few months, the Seattle Art Museum will set out to change this through its new “Peacock in the Desert: The Royal Arts of Jodhpur, India” exhibition, which brings to Seattle, for the first time, centuries-old Indian royal treasures.

“Peacock in the Desert” is the first major exhibition being displayed in the United States, curated by an all-Indian team, the Mehrangarh Museum Trust. It allows visitors to explore a cohesive collection of Indian art, introducing visitors to the Rathore clan and periods of Indian history when art and culture were flourishing. The exhibit gives visitors a full view of the life of Indian royalty and how they affected the culture of India in both the art and lifestyle of the people of India. Dr. Karni Jasol, the chief organizer of this exhibition, hopes that this exhibit will introduce more people to Indian culture.

To illustrate the culture of India, the exhibit combines centuries of art, jewelry, woodcrafts, and textiles, and although the collection is from one kingdom, much of the work on display is representative of the vibrant spirit of all of India, both past and present.

The exhibition is divided into six major sections.

It begins with a reenactment of a royal wedding as life-size elephant and horse mannequins, draped in beautiful garbs including decorative ornaments and royal insignias, are placed in the center of the gallery surrounded by beautiful woven turbans and videos of a real-life royal wedding. This first exhibition introduces visitors both to the importance of marriages in Marwar-Jodhpur and the themes that the exhibit will further explore, including the role of women in Jodhpur, Mughal and British influence in India, the diversity of India, and the tradition and continuity in India.

The second gallery officially introduces visitors to the Rathore clan and their impact on the people of Jodhpur, who began their rule in the 13th century.  Here and throughout the rest of the exhibit, paintings surround the walls to help contextualize the objects they are near. This contextualization lets visitors learn how the items were historically used, and also allows the visitors to imagine the attractions being used in their minds, giving the exhibit a type of interaction rare in typical art galleries.

As the exhibit continues, it explores India’s culture during the Mughal rule. The main attraction in this gallery is the “Lal Dera,” a military tent that fills the entire room with its glowing red velvet and golden embroidery. The tent symbolizes the mix between Mughal and Indian culture and the canopy symbolizes the Emperor's right to rule. It is the only intact Mughal military tent in existence today.

The next gallery displays the importance of women in the royal families in India, a concept that, according to Jasol, is not deeply explored in other Indian galleries. The gallery is filled with paintings that depict women doing activities like playing polo with men or women setting up festivals that helped preserve Indian culture throughout the centuries, emphasizing the crucial role that women played in the court as patronages and preservers.

"[Women] were in many senses, the soul of the kingdom lives," Jasol said. “The spirit of India [was] the women”.

In the last two sections of the exhibit, we see how India was ushered into the modern age, first from the fall of the Mughal empire to British influence to India's transition to independence and democracy. For the first time, paintings of the Maharajas are on canvas and oil, garments and jewelry are merged with a European aesthetic, and tourism is rising. The last gallery is juxtaposed with the beginning of the gallery, connecting the past that is displayed at the beginning and the present displayed at the end, emphasizing the theme of tradition and continuity within India’s culture.

For Jasol, it is important that the gallery shows that India’s culture is not frozen in time, but is also not ignorant of its past, showing how India uses the roots from its past to help develop its future. At the end of the exhibit, Jasol hopes visitors are not only able to appreciate and take in India’s culture but open their view to India itself.

“India is about colors, it’s about flavors,” Jasol said. “India is not just gray and black. In the end, the takeaway would be, ‘Yes, I want to go to India.’”

The “Peacock in the Desert” exhibit is open at the Seattle Art Museum from Oct. 18 to Jan. 21.

Thanks for sharing this post. I am very interested in eCommerce website . I would like to share my opinion on eCommerce website . eCommerce website agency in Qatar It's crucial for a developer to design/develop a really user-friendly web site as guests on the web site shouldn't really feel misplaced when looking by means of or when searching for a specific merchandise. The web site additionally have to be search engine marketing pleasant in order that an increasing number of prospects may be pushed to the web site for procuring.