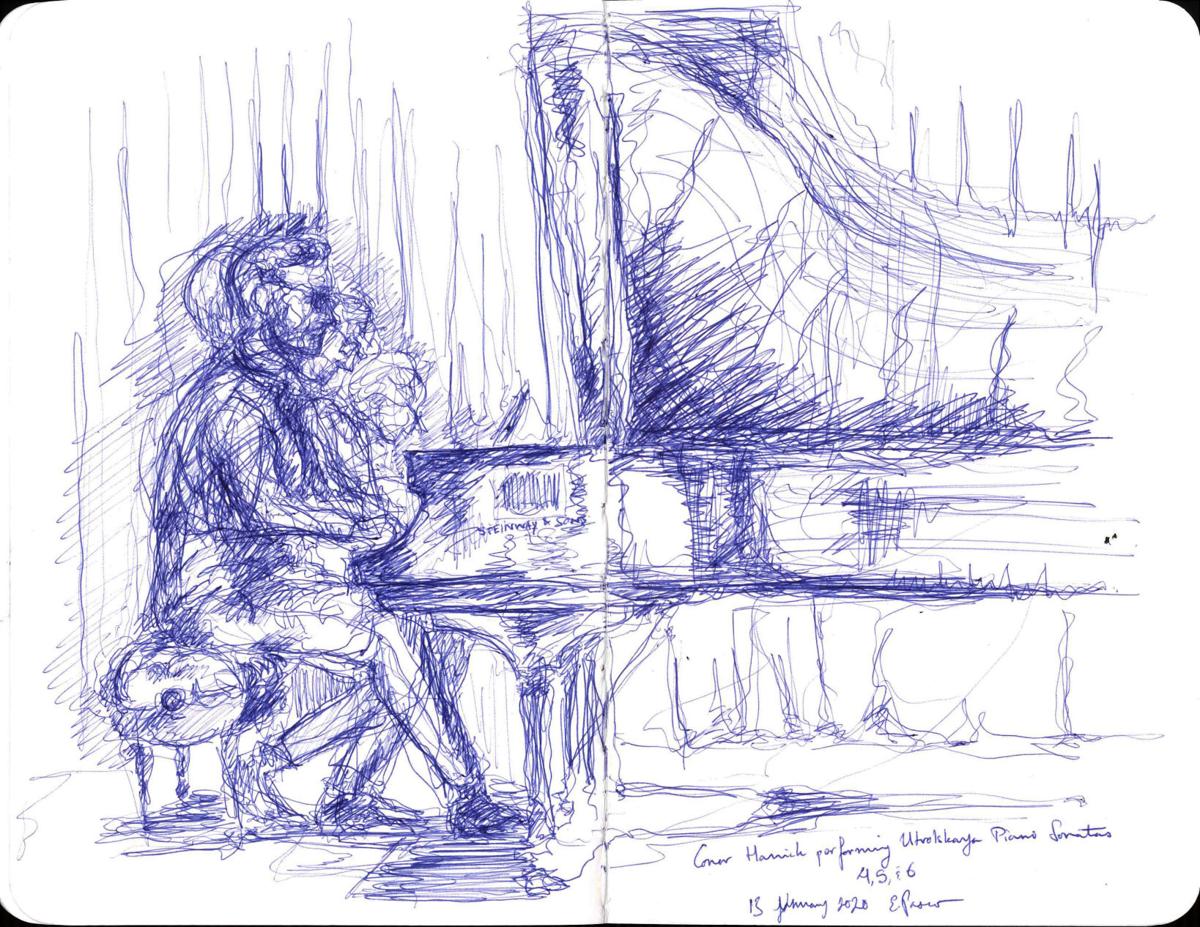 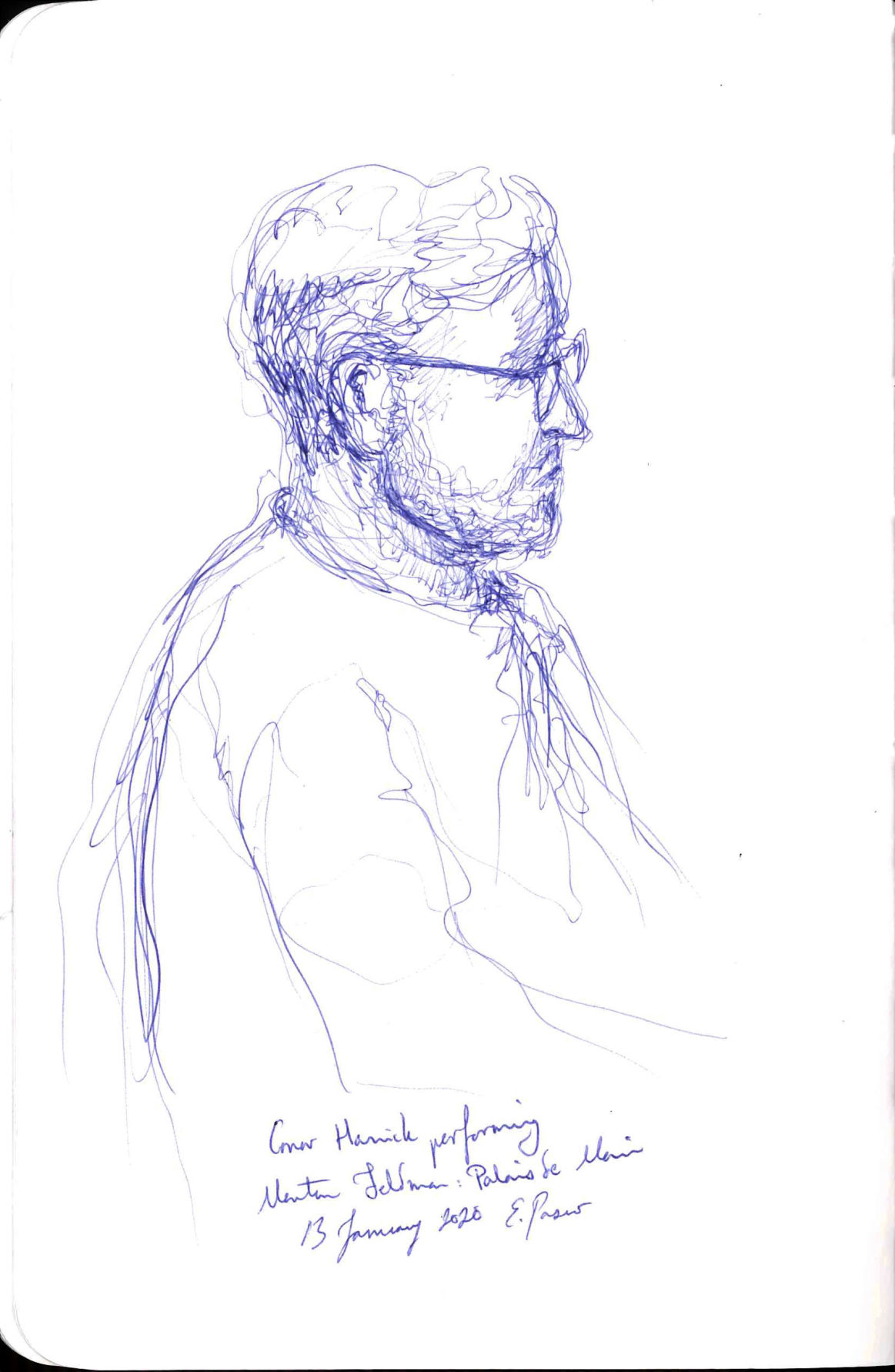 On a snowy Monday evening, I went to the Brechemin Auditorium in the Music Building to hear Conor Hanick, a Brooklyn-based concert pianist perform the works of Galina Ustvolskaya and Morton Feldman. Hanick, an incredibly accomplished pianist, has a long list of musical experiences and a nuanced understanding of the music he performs.

He began the concert with Ustvolskaya Piano Sonatas Nos. 4, 5, and 6 that form a musical evolution. Sonata No. 4, Hanick described before the concert, is singular and uncomplex. The notes stand alone and the rhythm is steady and forward. Sonata No. 5 centers around a single note and is slightly more erratic in structure, with repeating themes and motifs creating a difficult but engaging piece of music.

The final sonata was by far the most jarring and intriguing. Not only was it powerful and intense, but for Hanick, it was physically and mentally demanding. Large sections of the sonata require the pianist to smash wide sections of piano keys with force, creating a loud and powerful sound that pierces the space. At moments, it was so intense that Hanick would press his entire forearm onto a section of keys to produce a dissonant sound. Yet through all the chaos, there was order to be found.

For Hanick, these pieces represent something basic and elemental about music.

“The sonata feels straightjacketed, to me, it does everything it can do to break out of the earthly bounds of what a piano can do, and pushes it to the absolute extreme of its possibility, but it still feels trapped,” Hanick said.

I combined the various postures of Hanick as he leaned and shifted weight into one sketch, hoping to reflect the contrast between tension and relaxation in the performance.

The second piece was Feldman’s “Palais de Mari.” This piece was composed late in his life and is minimalistic and slow in tempo. The notes are sustained, with a stark contrast between this piece and the three previous sonatas. However, there is a musical style that connects these two composers, in that both are attempting to explore something atomic about music. Through the sustaining of singular notes and incorporation of jarring dissonances only to never resolve them, the listener is forced to be engaged. Sketching Hanick perform the Feldman piece, I used flowing lines to evoke something more contemplative.

The “Palais de Mari” is much more ethereal and atmospheric than the Ustvolskaya sonatas; there is a structure and pattern easier to discern yet more haunting. While the sonatas do not hesitate to keep you at the edge of your seat, Feldman eases you into the depths of your mind with simple musical questions and answers.

“It reminds you of the distance you travel, a piece that allows you to live in the moment and to realize the distances one has traversed and how we change over time,” Hanick said. “Even when themes come back, the rhythm is different or the notes are different. Despite the limitations, the piece never repeats itself.”

This music washes over you and explores, in microscopic form, what Ustvolskaya communicates directly. Hanick and I agreed that the imagery and themes of “2001: A Space Odyssey” come to mind; thoughts that make one feel small and unimportant, but a part of something bigger than oneself.

As avant-garde as these pieces may seem, they examine ideas at the very heart of music. They push the limits of music, using structures and motifs to question the nature of this form of expression.