A Tyrannosaurus rex skull bares its teeth to museum visitors from behind protective glass. 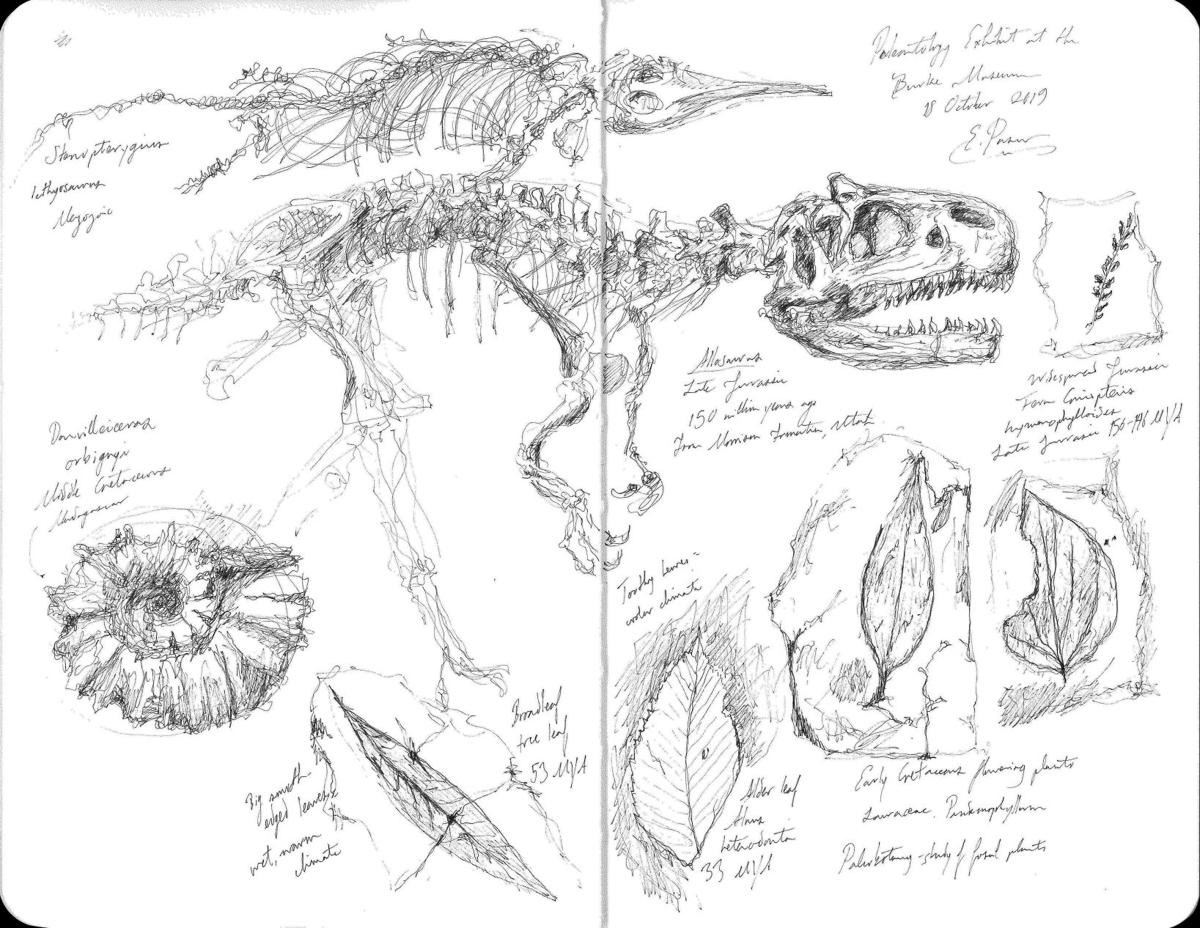 The Burke’s newly curated paleontology exhibit, Fossils Uncovered, is a colorful, in-depth journey through space, time, and a scattering of bones.

The exhibit begins with a brief glimpse of specimens from the Paleozoic era, which began 541 million years ago and is associated with the familiar Pangaea supercontinent that students learn in elementary school.

These fossils lead the way into the central geological eras of the exhibit: the Mesozoic, a period with many dinosaurs, and the Cenozoic, a period known for its diversity of mammals.

The word “Cenozoic” comes from the Greek word “kainos,” meaning new and fresh — drawing connections between the Pacific Northwest’s most fossil-rich time period and the unique experience the new Burke offers for guests and researchers alike.

The individual journey begins en route to the exhibit, with floor-to-ceiling glass windows along the halls that allow visitors to gaze into the workspace of researchers.

Students can be seen hovering over a microscope, with the scapula of a gorgonopsid — a Paleozoic mammal-like reptile similar to a Komodo dragon.

“I think we are the only museum that has many other parts of our work visible: the collections workroom, microscopy room, the photography room, and so on,” Caroline Strömberg, professor of biology and the Burke’s curator of paleobotany said. “There’s a lot more work that’s on display.”

As one makes their way through the dinosaur-laden exhibit, Tyrannosaurus rex makes more than just an obligatory appearance. It’s one of three fully complete T. rex skulls in the world, and according to professor of biology and curator of vertebrate paleontology Gregory Wilson, “This is the best of them.”

The T. rex, however, isn’t central to the theme of the collection. In fact, dinosaurs play less of a role in the exhibit than one might expect, reflected in a timeline of ancient events that range from the mass extinction of non-avian dinosaurs to surprising mammalian evolution.

Although mammals existed 100 million years before the Cenozoic, they experienced significant evolutionary radiation, or taxonomic diversity, during that era, hence their significance during this time period.

“The big story during the age of the dinosaurs is always the dinosaurs, but mammals were actually priming to take off and expand into the forms you see behind you,” Wilson said. “Here, the remains of a Columbian Mammoth tower over the room, alongside a bear-sized ground sloth from the ice ages that was discovered at SeaTac, of all places.”

Continuing along the Cenozoic are fossils that only appearmore familiar to the human eye: a baleen whale with teeth from warm Eocene waters and a petite tree monkey from the once-tropical rainforests of Wyoming.

The exhibit ends at a green-walled display of fossil leaves and paleofauna from up to 66 million years ago which are fundamental in understanding the vast climate changes of ancient Earth and its effect on the survival of living organisms. It is during this Cenozoic rebirth of life that flowering plants dominated the landscape, providing valuable information for paleobotanists through their pollen.

“We don’t see mass extinction,” Strömberg said. “There’s never a drastic change as there is now, so animals have time to adapt through evolution or migration.”

The drastic change that Strömberg speaks about, of course, is the one caused by humans.

At this point in the exhibit, things take a somber turn as visitors are reminded of a harrowing fact; today’s mass extinction is the biggest Earth has seen since being hit by a six-mile asteroid millions of years ago.

While it isn’t the jolliest ending to a journey through time, it surely is the one people thought of but didn’t want to acknowledge; the mammoth in the room, so to speak.