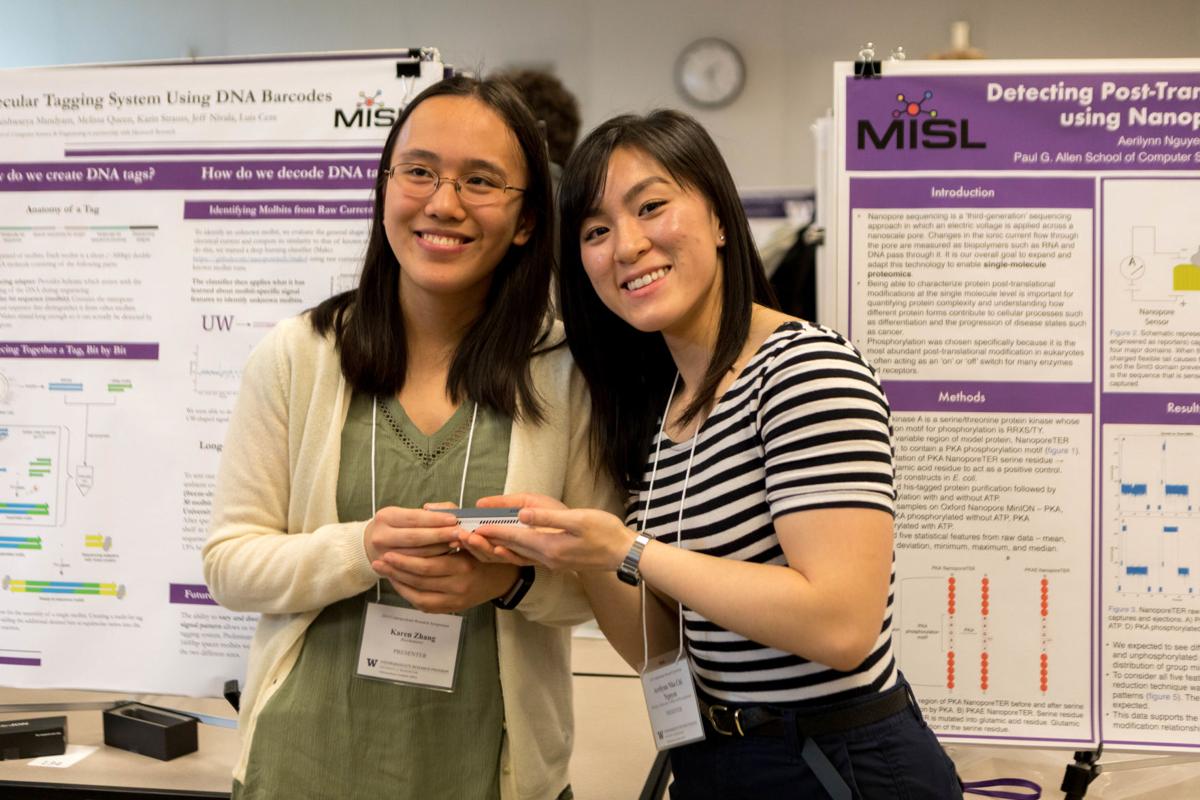 Aerilynn Nha Chi Nguyen and Karen Zhang show off the result of their technology research, a computer device known as NanoporTER, which seqences DNA for biology in order to better understand protien. 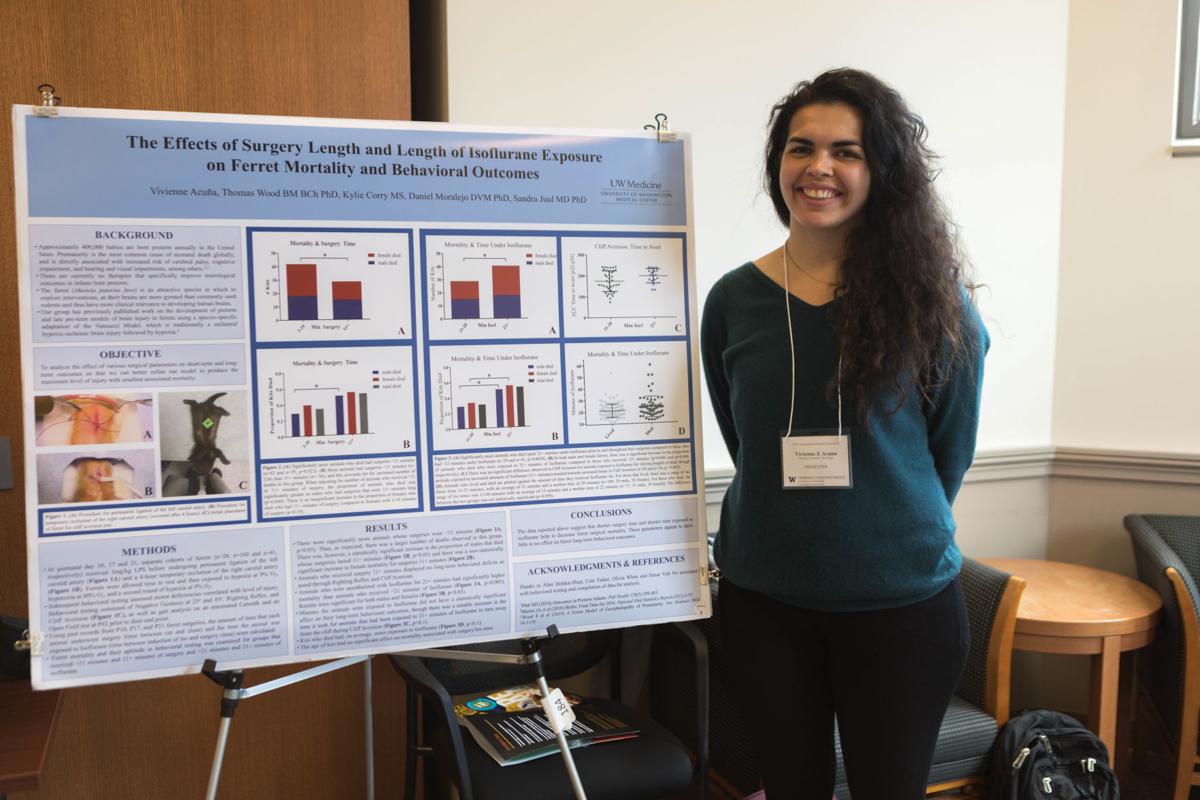 Vivienne Acuna proudly presents her research on ferrets, which was inspired by a desire to learn more about the neurological affects of pre-mature babies. 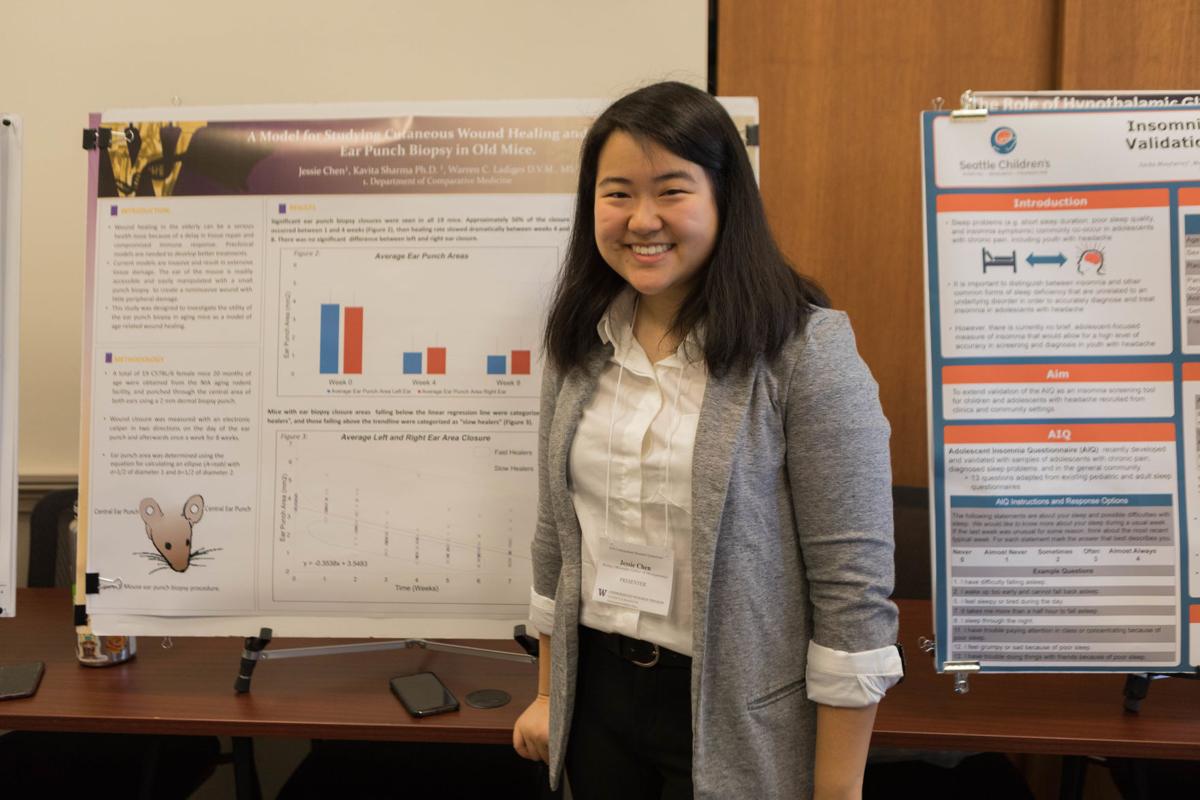 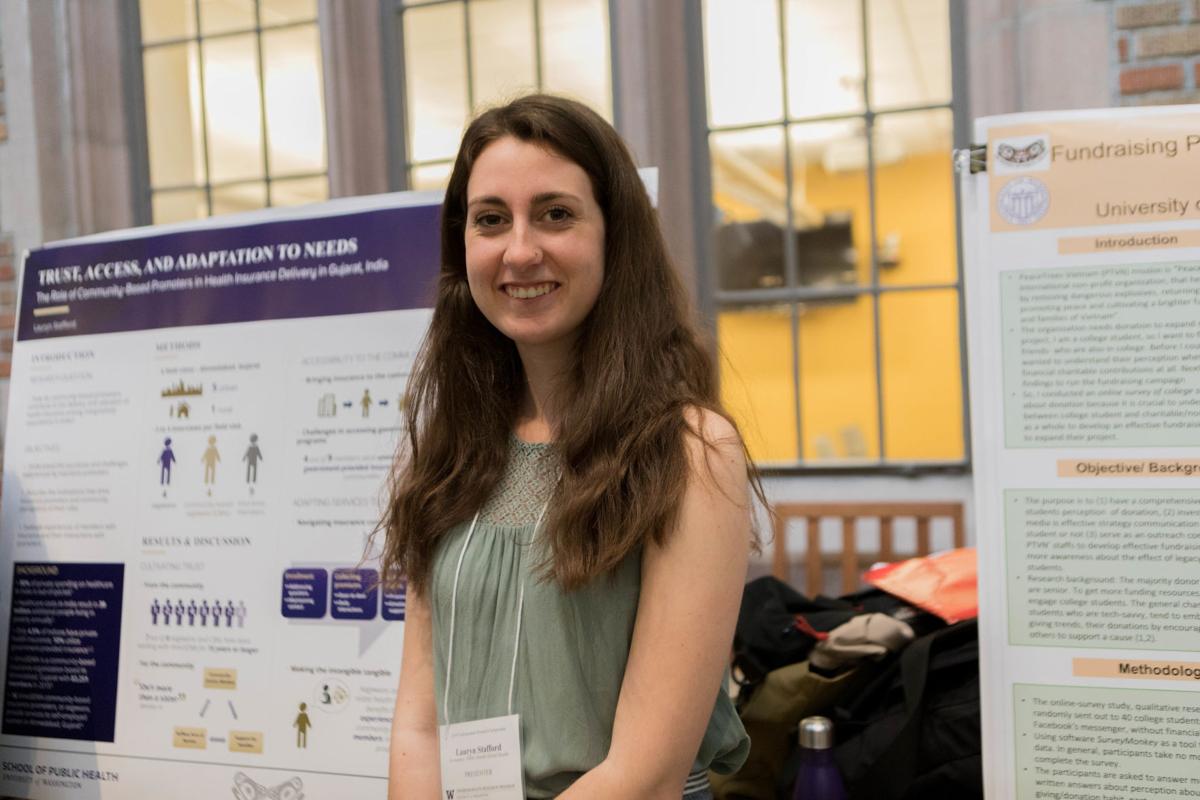 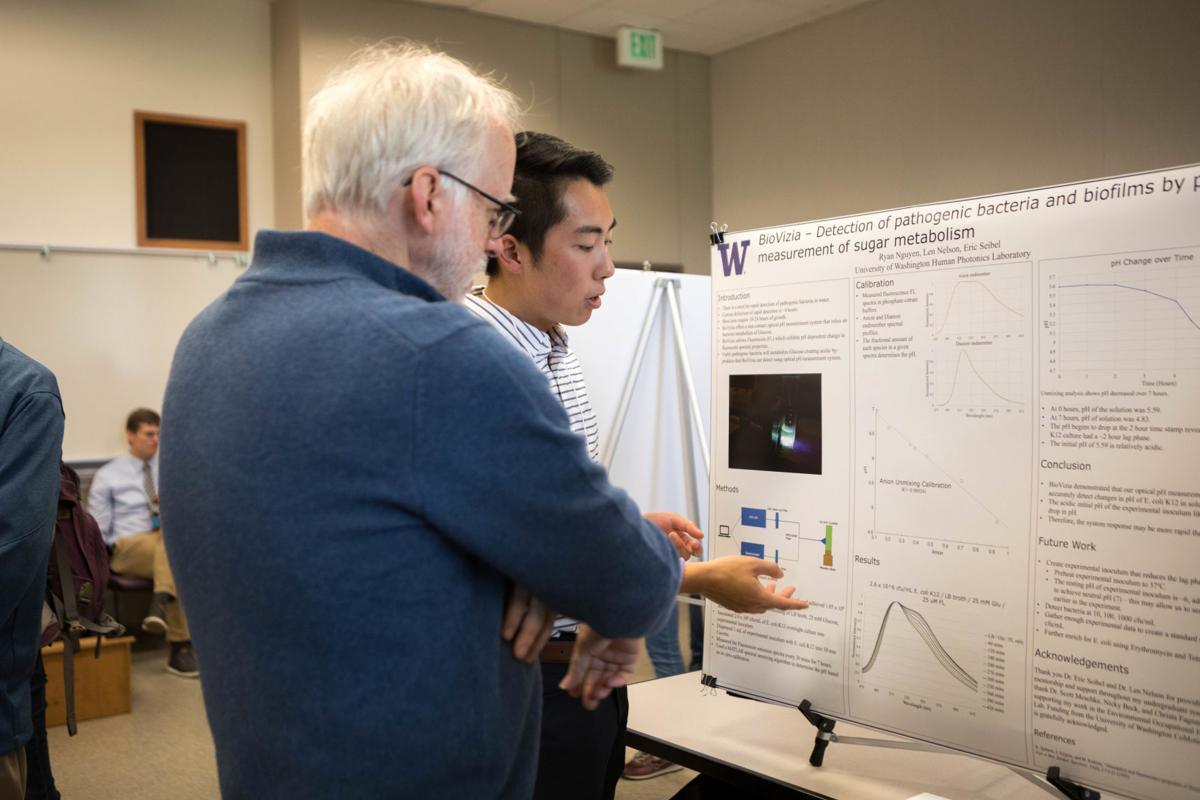 Ryan Nguyen gives a presentation on his research on pathogenetic bacteria during poster session two in a special room dedicated to neuroscience and related projects. 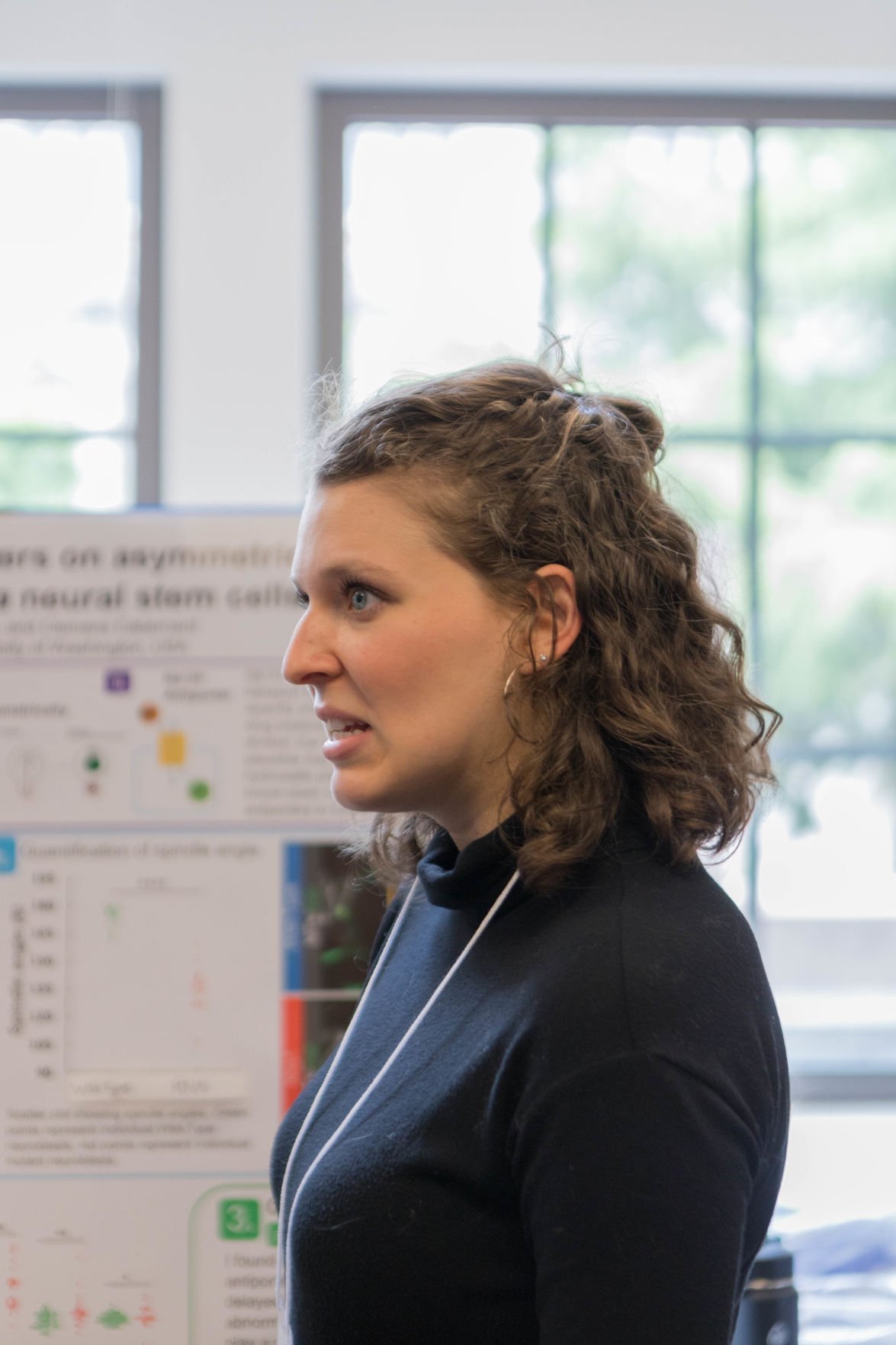 Mackenzie Coston speaks enhusiastically about her work with stem cells 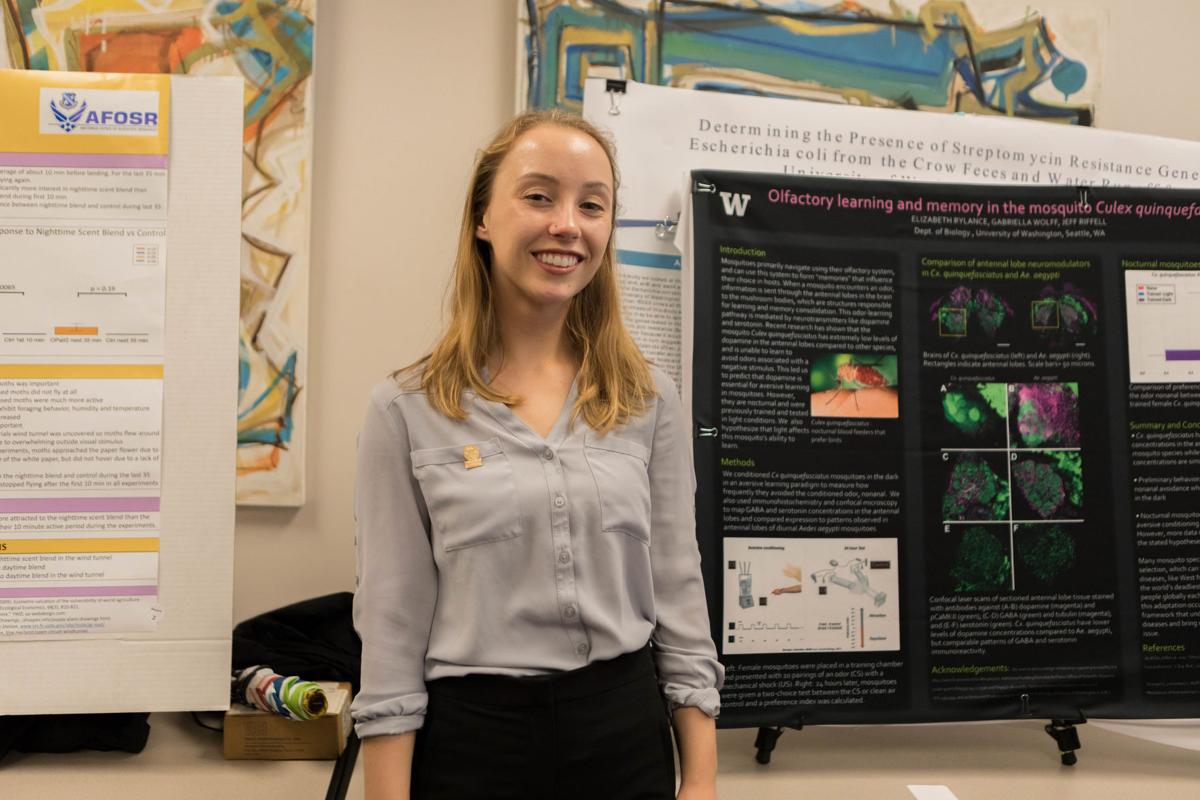 Editor’s note: Our coverage of the UW’s 22nd Annual Undergraduate Research Symposium once again seeks to highlight just a small fraction of the over 1,200 UW students who are engaged in research across all disciplines. Students from within the university and across the region descended in waves upon Mary Gates Hall last Friday, May 17, to present their projects and participate in hands-on research presentations.

This day is an opportunity to highlight some of the lesser known, but still valuable projects that students have been working hard on for months or even years of their college careers.

Research is an important reminder that science extends beyond the bounds of pure biology, physics, and engineering. It is all-encompassing, from art to social science to the intricacies of mountain biking with an equation, combining students’ personal interests with their professional passions.

Virtual reality can educate and help inmates with mental health

Using physics to push the limit in mountain biking

Mack Raymond and Jacob Aaron Logue found a way to integrate their love for downhill mountain biking with mathematical modeling. They developed an equation that can analyze any given bike trail and give the optimal time and velocity it will take to complete. They tested their method on a trail and found that their actual velocity closely matched their predicted velocity. Raymond and Logue hope to use their model to help professional mountain bikers develop their top speed and ride down trails in the least amount of time.

Does unpasteurized milk cause cancer?

Bovine leukemia virus in unpasteurized milk may contribute to breast cancer in humans, a study from the University of California, Berkeley found. Daphnee Patrom,an undergraduate student from East Central University in Oklahoma, examined this research in her study titled “Bovine Leukemia Virus in Unpasteurized Cattle Milk,” and ran her own tests to determine the accuracy of the findings.

Patrom traveled from Oklahoma to Seattle to present her findings at the UW Undergraduate Research Symposium. Patrom seeks to discover how the virus is transferred from cow to milk, and then to the consumer. In her research, she tested unpasteurized milk from different dairy distributors and found that the virus was present within the milk. It is important to note that unpasteurized milk is rare in urban supermarkets, but has been gaining local popularity as a trend within the health food community.

UW microbiology student, Maedot Yidenk, conducted a study titled “The Impact of Air Pollution on Mental Health.” She replicated a study conducted in South Korea that found that in areas of higher air pollution, inhabitants were more likely to suffer from depression.

Yidenk’s research used findings from the Adult Changes in Thought (ACT) study as a control group. The ACT studylooks at the effects of aging and Alzheimer’s and dementia.

Yidenk used data from 2,500 participants in correlation with their location and the pollution found in that region. She was not able to find a positive correlation between depression and pollution. However, she believes this could be due to the restrictions and the limited size of her study.

According to UW researchers, there could be more effective ways to help members of society suffering from homelessness and alcohol addiction than currently available abstinence-based treatment programs. Sazi Wald, a master’s student researching at the UW’s Harm Reduction Research and Treatment (HaRRT) Center, found that when individuals were able to set their own goals for their treatment, they were more likely to reduce use.

Continuing in this line of study, Rose Reyes, an undergraduate researcher at the HaRRT center, investigated the types of goals individuals made for themselves. They found that individuals improved their interactions with family and friends, they set goals to find housing and work, and their goals increased the longer they continued the harm reduction treatment.

In 1946, the United States began testing nuclear bombs on the Marshall Islands, a group of islands in the middle of the Pacific Ocean, and continued to test a total of 67 bombs until 1958.More than seven decades after the last test, the residents of the islands continue to suffer from the effects of radiation. Drake Basso, Melaika Andrike, and Elizabeth Luong want to bring attention to the problems residents face and hold the U.S. government accountable.

In their research, they look at the effects of nuclear testing in relation to cultural disruption, displacement, and health impacts. They found that the effects of the tests disrupted their culture by destroying their native food sources, such as plants and fish, and their ability to make medicines from indigenous herbs and roots. The effects of testing also caused displacement and health issues such as cancer, reproductive issues, and miscarriages.