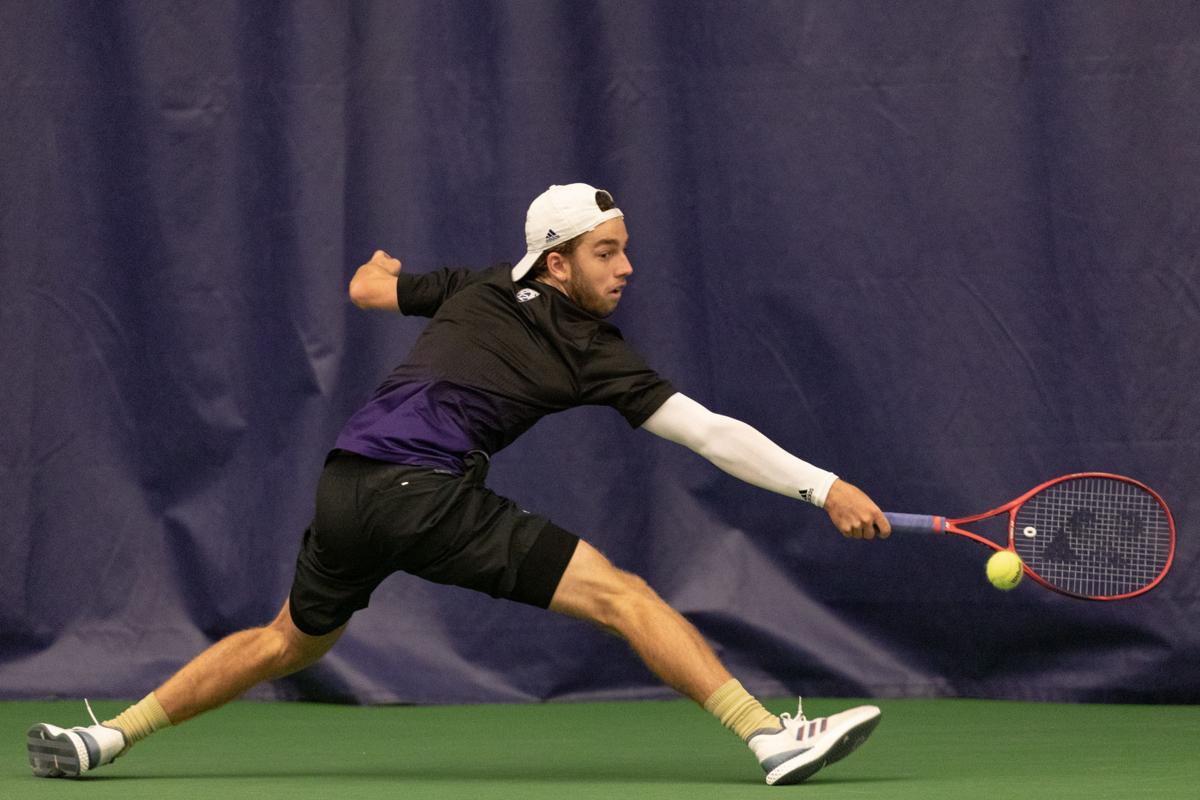 Senior Liam Puttergill leans for a backhand shot in Washington's 3-4 win over UC Santa Barbara on Jan. 20, 2020 at the Nordstrom Tennis Center. Puttergill had only been in the United States for 77 days when the men's tennis season was halted by COVID-19 and he was forced to return to Australia. 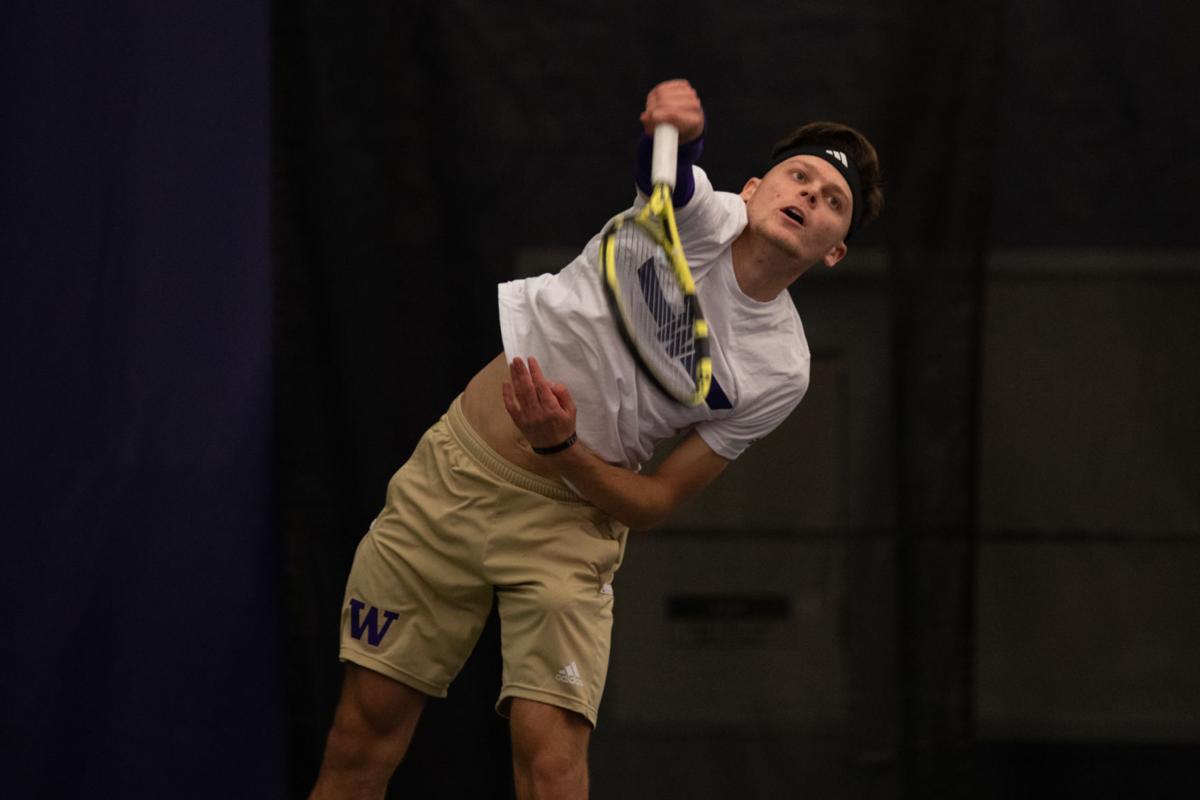 Sophomore Ewan Lumsden swings at a ball during the Washington 5-2 loss to Pepperdine at the Nordstrom Tennis Center. Lumsden, originally from Scotland, originally went with doubles partner Jack Davies to Canada before returning to Europe after the cancellation of the men's tennis season due to COVID-19. 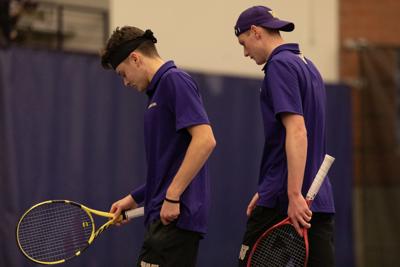 Liam Puttergill had only been in the country for 77 days when the Pac-12 announced the cancelation of all athletic events.

Joining the Washington men’s tennis team as an exchange student from Australia at the beginning of the spring season, Puttergill played at the No. 3 singles spot against Seattle U in his first match, just 16 days after landing in the United States.

After spending months preparing to move and playing through half the season, Puttergill could only watch as the threat of the novel coronavirus sharply took a turn for the worse near the beginning of conference play in February.

On March 10, the Samford men’s tennis team made the decision to not fly to Seattle amid coronavirus concerns. The cancellation of the match was one of the first UW athletic events to be canceled due to COVID-19.

As the seemingly-distant threat of the virus forced a complete shutdown of athletics, in-person classes, and the institution of Washington state’s stay-at-home order, international student-athletes faced a particular set of challenges amid the changes.

Without home nearby, athletes like Puttergill had to decide whether or not they would pack up their lives, fly away with no idea when they would return, and wait to see how a pandemic would unfold in their home countries.

“I was actually studying, for once, and we just kept getting updates,” Puttergill said. “Like every half an hour, there would be a new one. Next thing you know, the whole season is canceled.”

More than half of the players on the men’s tennis team are international students, with athletes hailing from Scotland, Hungary, Australia, Canada, Mexico, and France.

With the cancellation of spring competition March 12, six of the 10 UW players were forced to choose whether or not they would leave the country in the face of the pandemic. And as countries urged their citizens to return and pressure continued to mount, international players on the team were left with few options.

In the end, they all went home.

“Eventually it got to the point where I was the last person I knew in Seattle,” Puttergill said. “I was the only one left and then I flew out that Sunday morning.”

Unable to hug his family when he got off the plane, Puttergill started quarantining in his home for the recommended 14-day period after arriving home in Noosa, Australia.

“Eventually it got to the point where I was the last person I knew in Seattle. I was the only one left and then I flew out that Sunday morning” - Liam Puttergill, UW senior men's tennis player

Before the season ended, sophomore Ewen Lumsden was in the middle of a strong second year with Washington. After beating his first ranked opponent in the match against Pepperdine,  Lumsden was ranked No. 119 in the country in February.

Continuing to prove himself throughout the season, Lumsden went on to play at the No. 1 singles spot in the opening weekend of Pac-12 play against No. 22 UCLA and No. 1 USC. A week later against Boise State, Lumsden won in the No. 2 singles spot, but his match against the Broncos was the last he would play in the spring season.

“I was shocked and in disbelief,” Lumsden said. “We were starting to get some momentum as a team and we had some big matches still left still to play. We were really looking forward to them.”

The team had planned on spending spring break on the road, making four stops in California and one in Utah, with big conference matches scheduled against Stanford, Cal, and Utah.

“After the decision was made to cancel all spring matches, I decided to go to Canada with my teammate Jack [Davis],” Lumsden said. “We spent some time training together to see if things would calm down and go back to normal. Obviously they haven’t so I decided to go back home, at the start of April, to Scotland.”

Because of the complete suspension of events, training, and workouts, the team will have to try to maintain the momentum they have built throughout the season at home.

Even though the team is spread out around the world, the chaos of the quick shutdown has now turned to anticipation for what is to come next.

“Hopefully the summer tournaments will be back on and we can get some matches before the season starts again,” Lumsden says. “Our goals will stay the same as a team.”

As of right now, athletics and classes are set to resume as normal, allowing time for the team to get back to training together and possibly play in tournaments in the fall.

Following the past season’s mixed success and being stopped during a critical point in Pac-12 play, the team will have to jump into next year with a fresh, new outlook, ready to take on the year even with the time spent apart.

Despite his senior season and time in the United States being cut short, Puttergill continues to look back on his time at Washington fondly and remains optimistic about the team’s future.

“It was so worth it once I got there,” he said. “Especially to such a great school. I was just happy to be there. I think everything will work out OK.”