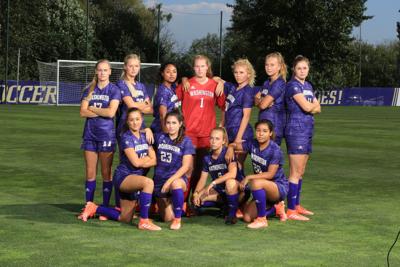 Last fall, 11 freshmen came to Montlake to join the Washington women’s soccer team. While not all of them have had the same starts to their careers in the purple and gold, the promise and unity of the group may be a sign of great things to come.

A few hit the ground running, most notably Summer Yates, who was second in scoring her freshman year and now leads the team in both goals and assists this season.

The talent has been there from the beginning, but the maturity in her position is something that’s grown a lot over the past two years.

Along with Yates in the starting lineup is midfielder Vanessa Millsaps, who’s started in the team’s past nine games. She redshirted her first year due to injury but that just slingshotted her to become a big contributor on this team.

“It definitely prepared me,” Millsaps said. “I was able to get a good look at what the coaches wanted us to play, what they expected from us, so that was huge. I had three different injuries within my first year, so it was super overwhelming and not planned at all, I came in expecting to come full-go. But it’s definitely helped me because I’ve been able to look at the team from a little bit of a distance and see how it all works.”

The redshirt is generally unavoidable when it comes from injuries, but being able to take the time to learn and prepare can help players the following year. The same path was taken by defender Shae Holmes, who has slowly worked her way into the rotation this season and has shown flashes of great skill in little time.

Behind Holmes on the defensive end will likely be keeper Dani Hansen. After an injury to senior keeper Siena Ruelas kept her sidelined, Hansen stepped up and played the first six games, and the sophomore produced. She only allowed six goals and recorded 16 saves in that time.

“Dani has definitely stepped up, just being able to train with her every day; her, myself and Anna [Miller] just being able to push each other, definitely helps us to get better,” Ruelas said. “One thing I definitely admire about Dani is that I know that last year she had a lot of issues with some injuries and is dealing with them now, but she always picks her head up and continues to fight.”

The playing time for Hansen has been extremely valuable, and as the only returning keeper for next year, it’s likely she’ll be the one in front of the net for the Huskies in the foreseeable future.

Some other players who have been getting a lot of playing time off the bench are Makena Carr, a speedy winger, and Karlee Stueckle, a hurdler for the UW track team in her first year with the soccer team.

Ruby Hellstrom is a forward that has seen a lot of highs and lows in her playing time, but always has a positive attitude. She is one of the primary mouthpieces for this sophomore class and it’s unity.

In the UW’s first game of the season, Hansen recorded a shutout in her first career start. In a postgame press interview, Hellstrom came over to the keeper and said she was the best keeper there is.

“We’ve grown up together so much, because we all see the highs and lows that everyone goes through and so there’s never a standstill,” Hellstrom said. “Something’s always going on, but then we always just have each other’s back and we’ve always been able to grow emotionally, physically, on and off the field together and that’s been really special.”

She’s one of the several sophomores living in the same house, which also includes the two co-captains, Taylor Sekyra and Lisa Jensen.

“When you practice together and then you come home and you’re in the same house, you just kind of build that bond,” Hellstrom said. “It’s a really special bond that we have within the team, but especially within that core sophomore class.”

This team has eight seniors this year, including six starters and both co-captains, and with the upcoming departure of Gallimore, this class gives a sense of comfort that the program is going to be in the right hands for years to come.

“It’s so sad to see the senior class go,” Hellstrom said. “But I feel like we’ve built a strong enough base within our team and the younger classes, and the seniors have taught us so much on how to lead a team that when they unfortunately graduate, we’ll be ready to run in their footsteps.”

Quite a challenge covering the entire team. Creditable and creative reporting.