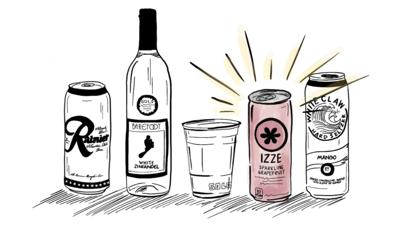 Every year after suffering one final hangover on New Year’s morning, millions lock the liquor cabinet and join Alcohol Change UK’s annual movement: Dry January. The rules are simple. In fact, there’s only one: for the entire month of January, do not drink alcohol.

Alcohol Change UK’s website boasts that 88% of its participants save money, 71% sleep better, and 58% lose weight during the month-long booze break. The primary goal of the practice is to reset the participant’s relationship with alcohol and establish healthier drinking habits year-round.

The consumption of alcohol is a crucial component of college campus culture. You might not even realize it’s the weekend without a White Claw in hand.

Though alcohol might cause issues in both health and academic performance, cutting it completely for Dry January might not actually improve a college student’s relationship with alcohol in the long term.

College life is equal parts studious and stupid. Weekdays we are glued to our computers, cranking out assignments or procrastinating by binging on Netflix, but come Friday night, we are binging something else: alcohol.

“Some folks can go [without alcohol] for weeks, but when they do drink, it's off to the races,” UW medical expert Dr. Richard Ries said.

A survey by the National Institute of Alcohol Abuse and Alcoholism found binge drinking behavior in 44% of college students age 18–22, while heavy alcohol use is found in just 9.6%. Some binge drinkers develop a dependence on alcohol; others do not.

Dry January, or the practice of abstinence over a short period of time, can be an experiment to test dependency.

“I wouldn’t call [Dry January] a detox,” Ries said. “I would call it a trial of non-drinking to just see how non-drinking works for a person ... You might get a variety of responses that open the door to discuss how much of a role alcohol plays in their lives.”

Typically, a person whose alcohol abuse follows a binge pattern will not have too much difficulty abstaining for a relatively short period such as a month.

While not a Dry January participant, an anonymous underage source opted to stop drinking as a sort of Fourth of July resolution.

“I wasn’t a huge partier,” he said. “I would go to parties about once a month.”

In the source’s case, he drank infrequently, only in the social setting of a party. But frequency was never the issue; it was quantity.

“I’m kind of a big guy, so it would take about eight drinks [to get drunk],” he said.

For this source, giving up alcohol went smoothly after getting over the initial social stigma associated with being both social and sober. This is because he was not dependent.

For someone with binge drinking tendencies, Dry January will not force them to confront their primary issue of quantity. The hope of Dry January is that participants will see improvements in their lives which will lessen the desire to drink beyond the 31-day challenge. However, in the case of binge drinking, Dry January does not address the root causes of the issue and cannot yield significant lifestyle changes. Sure, the average college binge drinker might sail through a month playing sober sister, but then they might also celebrate this success with half a fifth on Feb. 1.

If you know you exhibit binge drinking behavior, monitoring the amount you drink, rather than how often you drink, might be a better strategy for establishing a healthy relationship with alcohol.

So often, we binge drink to loosen up and have more fun in social settings. Frankly, if you think you are more socially apt intoxicated, it might be because sober-you can never truly meet drunk-you — a blessing and a curse.

The same anonymous source reported that he did not feel the supposed social lubricant effects of alcohol.

“I was hoping to not use [alcohol] as a crutch and I could just talk to people,” the source said.

But in his experience, he found he actually enjoyed sobriety in settings that would have normally had him reaching for the Smirnoff.

This source made the choice to do a little more than a month-long period of sobriety. While this can be a valid strategy, it is not the only option. Some nights, you just have to get plastered. Your doctor and most certainly your liver might think otherwise, but kneeling in front of the toilet while your best friend holds your hair back is a rite of passage.

That being said, not every weekend has to be a full-send. A binge drinker may not recognize their behavior as alcohol abuse, but nonetheless, it is. Monitoring the number of drinks you consume in one night for a “Drier January” might be a better way to establish healthier drinking habits.