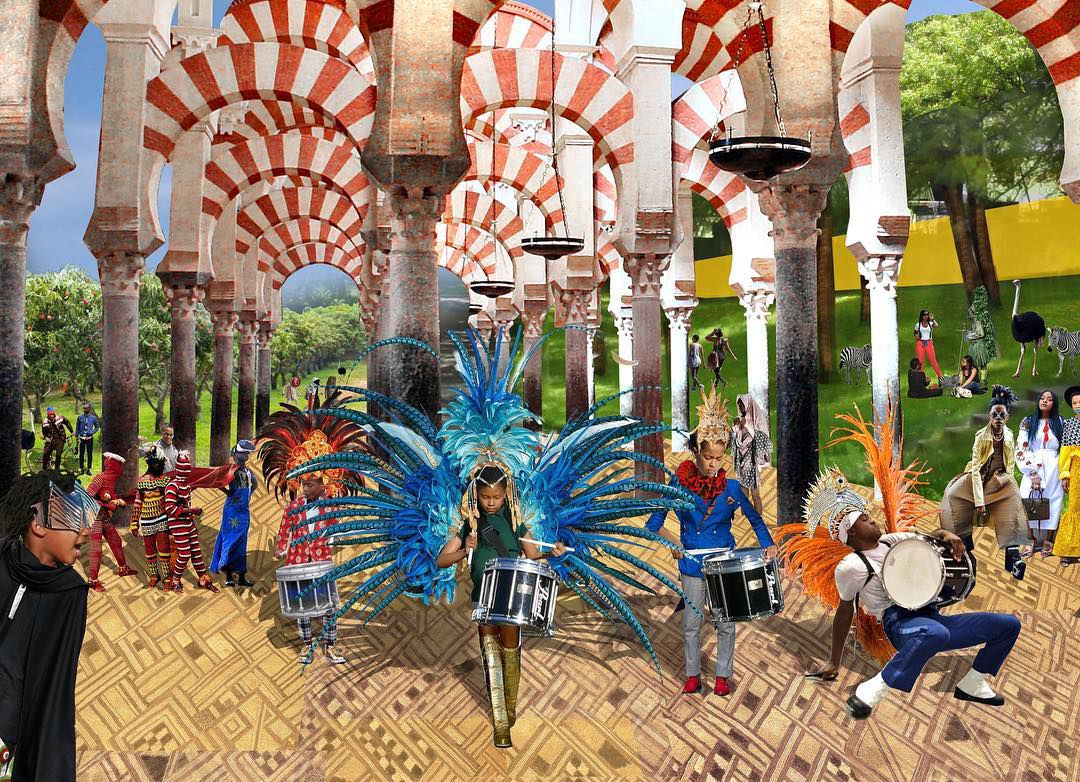 This sign detail from Dr. Blanche Lavizzo Park shows a procession of children adorned in feathers and crowns inspired by Egyptian headdresses. Arches from the Great Mosque of Cordoba and a pathway patterned with tapestries complete the scene. 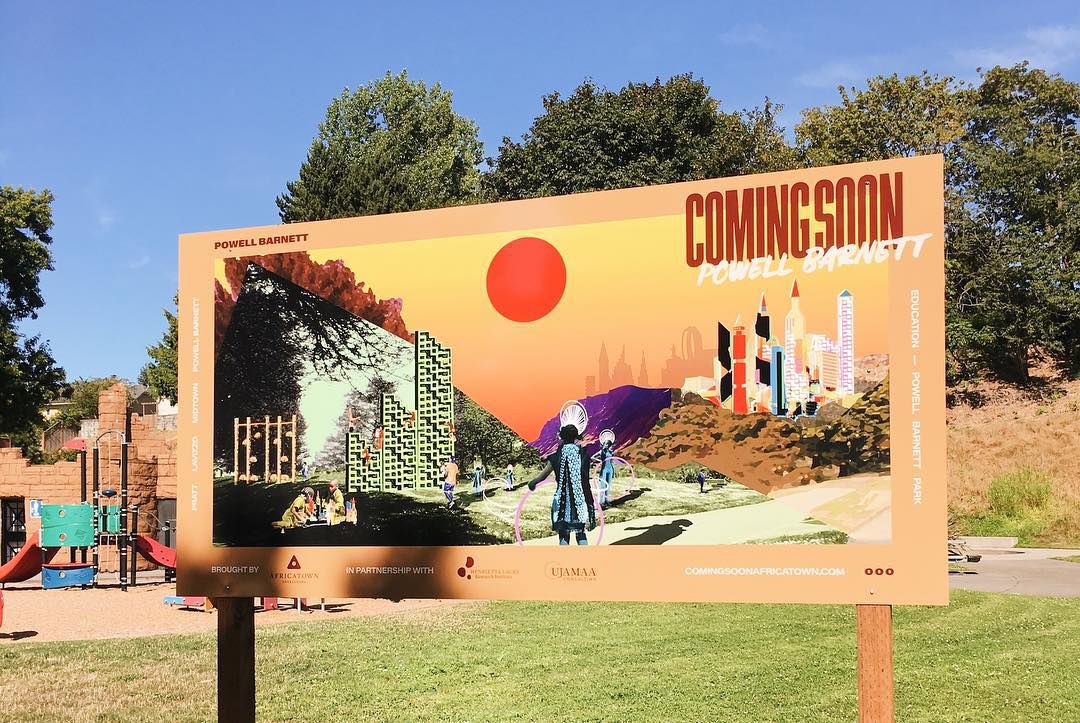 The "Coming Soon" sign at Powell Barnett Park stands in front of a playground. 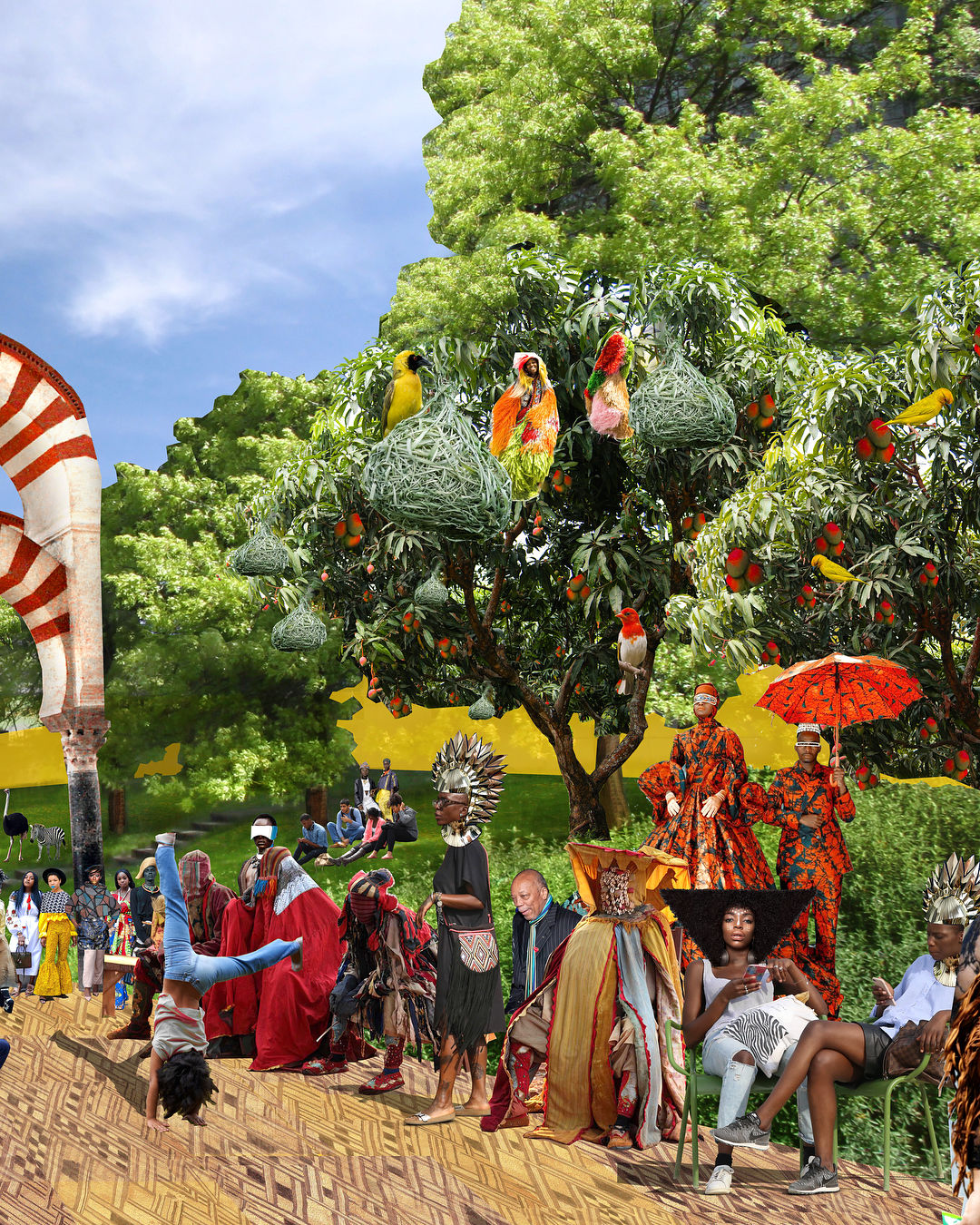 This sign detail from Dr. Blanche Lavizzo Park shows a procession of children adorned in feathers and crowns inspired by Egyptian headdresses. Arches from the Great Mosque of Cordoba and a pathway patterned with tapestries complete the scene.

The "Coming Soon" sign at Powell Barnett Park stands in front of a playground.

In the early 1970s, more than 70 percent of residents in Seattle’s Central District (CD) were African-American. Today, that figure is less than 20 percent. After decades of redlining, a form of racial discrimination when providing neighborhoods with financial or other services, followed by a sweeping tech influx and gentrification, this community is quickly disappearing from the CD.

In a project to counter that trend, landscape designer Sara Zewde came up with the idea for a series of fictional “Coming Soon” signs. The signs show Central District park spaces redeveloped with swooping Moorish arches and colorful tapestries, populated by children playing double Dutch with lasers and adults wearing Lagos Afropunk styles. The design parodies actual developer signs that advertise new construction in the area.

A team of artists including Zewde, UW human centered design and engineering (HCDE) professor Daniela Rosner, and designers Azzurra Cox, Aria Goodman, and Selina Huntsiger worked together to create four vibrant signs at parks across the Central District. The signs are intended to provoke thought about the history and future of local communities.

“It’s meant for conversation, to have people pause and think about what they want the community to look like in the future and what they can do to effect that change,” Cox said.

The images come from Africatown Community Land Trust design ciphers over the past few years. The meetings brought together a wide variety of designers, planners, developers, and community members to imagine Africatown, a utopian and distinctly African-American community in the Central District.

“What we wanted to do was have people realize that everyone can have a hand and a voice in imagining the future of a space, especially a space that they hold dear and know,” Cox said.

The ideas were collected on a spreadsheet, which eventually sparked Zewde’s idea for the “Coming Soon” signs.

“What struck me as I was hearing people talk about these ideas, these missions, all the things on this spreadsheet, it really felt like people were trying to think [in terms of] place,” Zewde said. “It all felt like it could be on one street.”

One of the project sites, Lavizzo Park, currently has a pedestrian path leading from the street to the amphitheater. In the “Coming Soon” sign, the path is shown with Córdoba-style arches and a carnival parade, which evokes Mardi Gras traditions from the African diaspora.

“It’s a mix of black traditions and black architecture with the existing site at Lavizzo Park,” Zewde said.

Meanwhile, the Pratt Park sign shows a space that is more open and welcoming to local residents. A housing unit next to the park is shown with a large porch to celebrate the residents’ relationship with the park.

The sign at Powell-Barnett Park envisions the future of play. Children play double Dutch, which is culturally rooted in the black community, with lasers and use multicolored, arched play structures that evoke black architecture.

One final sign will appear this week at 23rd Avenue and East Union Street, a historically African-American block that has been called “the test site for gentrification.” Unlike the other signs, this one will not be at a park.

“What’s cool about that one is that the site it depicts is owned by the Africatown Community Land Trust and still being redeveloped, so our ‘Coming Soon’ signs and the discussion generated around it might influence actually what is being built,” Rosner said. “So it’s almost real, or at least possible.”

One easy-to-miss but important detail is the developer logo section at the bottom of each sign. The logos suggest fictional, but potentially someday real African-American-owned businesses like the Kuumba Africatown Arts Council and the Henrietta Lacks Research Institute. Together, the logos complete the vision of a culturally and economically thriving African-American community in the Central District.

“It’s not just the sight itself,” Rosner said. “It’s also the world that’s being built through the fictional Africatown developers association.”

Goodman said that the team saw the project as a milestone in Africatown’s work. She said she hopes it will encourage the community to dream big.

“If you can see it, you can make it happen,” Goodman said. “We hope that this project generates momentum for a broad range of voices to get involved in shaping the future of the Central District.”