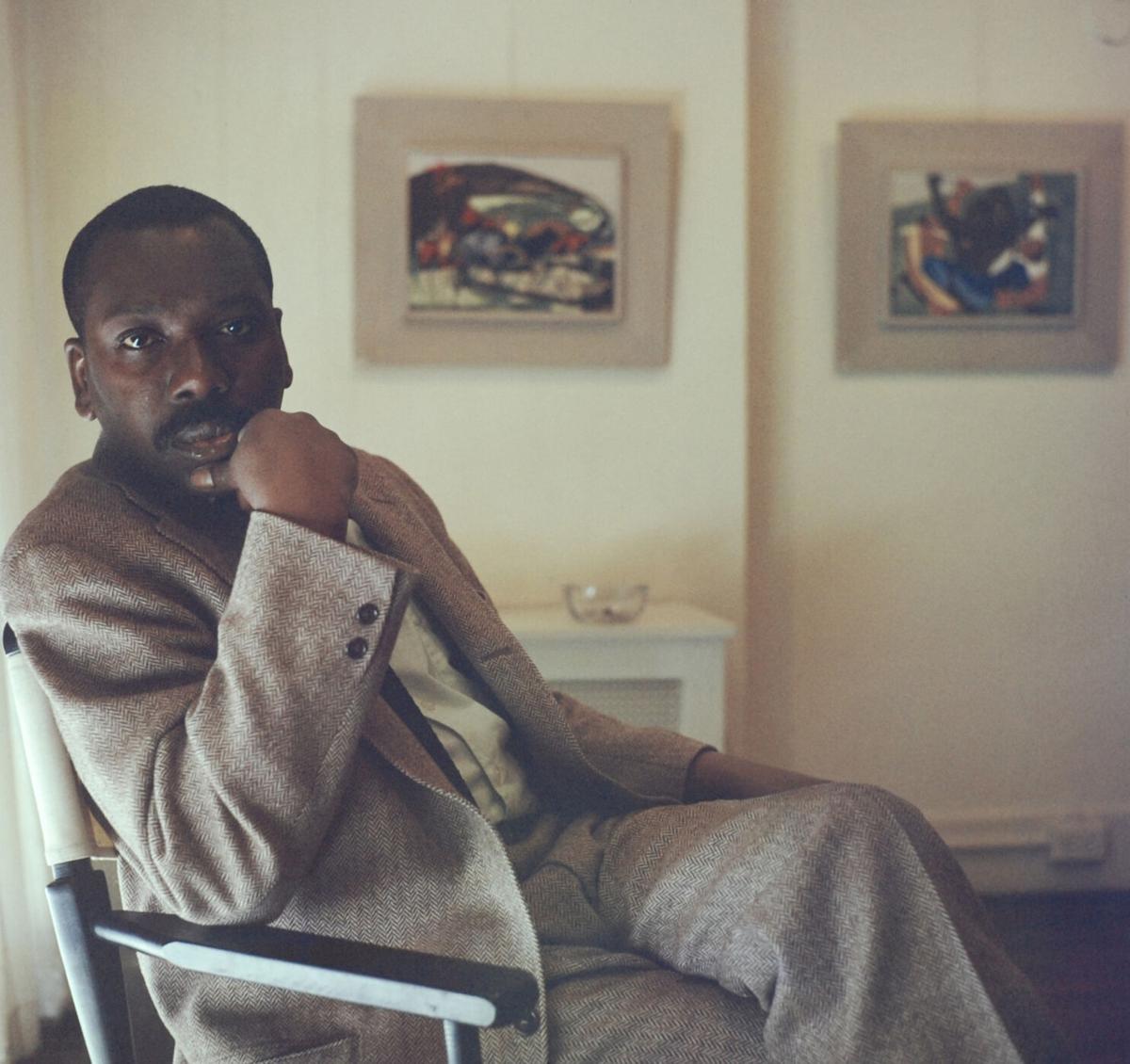 Artist Jacob Lawrence sitting in front of some of his paintings. (Photo by Robert W. Kelley/The LIFE Picture Collection via Getty Images) 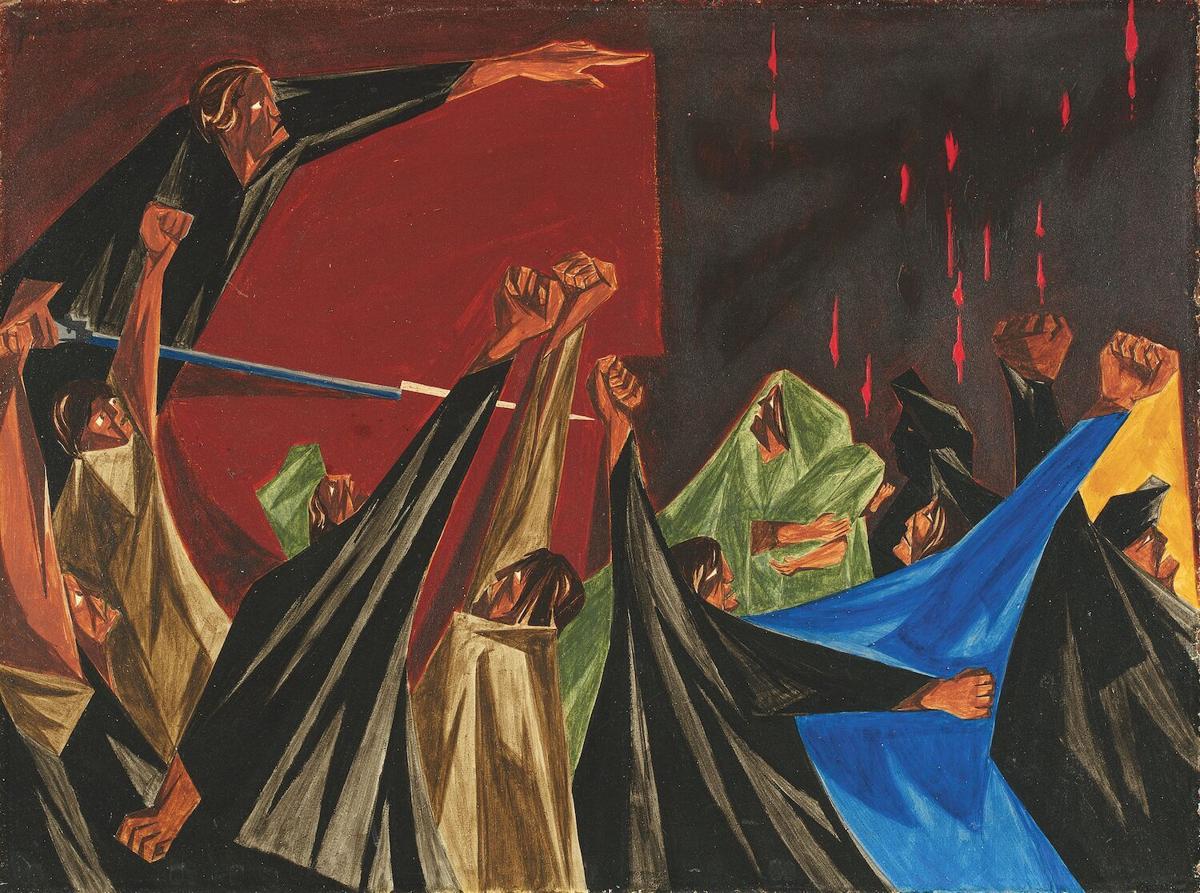 Diverse perspectives are too often missing in U.S. history books. From the Revolutionary War to westward expansion, American histories are often told from a single vantage point, leaving out important and diverse voices. The Seattle Art Museum’s (SAM) newest exhibition, “Jacob Lawrence: The American Struggle,” acknowledges this fault and portrays American history in a new and inclusive light.

Jacob Lawrence was one of the most influential Black artists of the 20th century. The first Black artist to be represented by New York’s Downtown Gallery, Lawrence was also a professor of art at the UW during the 1970s and 80s, according to the SAM. In 2017, the SAM presented another of Lawrence’s projects, “Jacob Lawrence: The Migration Series,” which showcases stories of Black Americans during the Great Migration. “The American Struggle” depicts similarly poignant narratives.

This exhibition marks the first time the “Struggle” series has been on display in over 60 years. Some panels were sold to private collections and were only recently recovered. Remarkably, the SAM has 26 of the 30 panels, with the remaining four still missing, according to Papanikolas.

The Peabody Essex Museum in Massachusetts organized the traveling exhibition, and the SAM has the distinct honor of being the only West Coast location.

The panels illustrate major events in American history, such as George Washington crossing the Delaware, Lewis and Clark’s expedition westward, and Paul Revere’s ride into Lexington — but from the perspective of historically marginalized groups such as Black Americans, Native Americans, and women.

“These are absolutely beautiful and very powerful paintings,” Papanikolas said. “They give a sense of how history and historical events can resonate in the present and can really have relevance even today.”

Traditionally, the dominant narratives and victories are what make it into the history books.

“The way that Lawrence tells these stories are alternative histories,” Papanikolas said. “So he’s telling them from the perspective of somebody who might have lost in battle or someone who was behind the scenes or on the sidelines or in the thick of the action. That different retelling of these stories frees up our mind … and we begin to think about their meanings in a very different way.”

The SAM followed suit in Lawrence’s aim to reveal diverse perspectives. The SAM’s Teen Arts Group asked young artists what they felt a 31st panel in the “Struggle” series should depict today. Of the submissions, 12 were chosen, and each of the panels are on display in “The American Struggle” exhibition.

“[The young artists] all had a very different take,” Papanikolas said. “Some of them are very Jacob Lawrence-like. Others are very personal … And some are almost utopian.”

The contemporary artists included in the exhibit bring a modern take. Their works emphasize continued societal struggles through different artistic mediums, according to Papanikolas. Adams included a video, Collins crafted sheet music, and Thomas worked with retroreflective vinyl and photography.

The exhibition urges viewers to take a step back and reconsider what they know about American history through an interpretive lens.

“[‘Jacob Lawrence: The American Struggle’] is an opportunity,” Papanikolas said. “It’s a sort of landmark moment in the history of this series because it is the first time it’s been reunited. It’s powerful, it’s trying to make you think and reflect, and it’s an aesthetic experience like no other.”

The United States continues to face an uphill battle in terms of racial equity; “Jacob Lawrence: The American Struggle” exposes the historical injustices underpinning our current moment and is an incredibly timely exhibition.

“[The] SAM has the privilege of showing it at a very critical moment in discussions around race in this country,” Papanikolas said.

This exhibition will run through May 23.