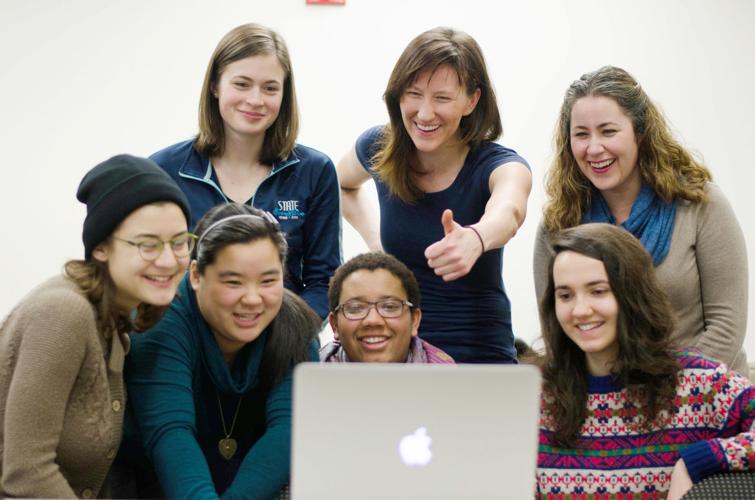 Ivette Bayo Urban (top right), lead facilitator and PhD student of the information school, along with other volunteers in pipeline project is skyping with kids they have been working with from Neah Bay Elementary School during their meeting on Wednesday February, 25. 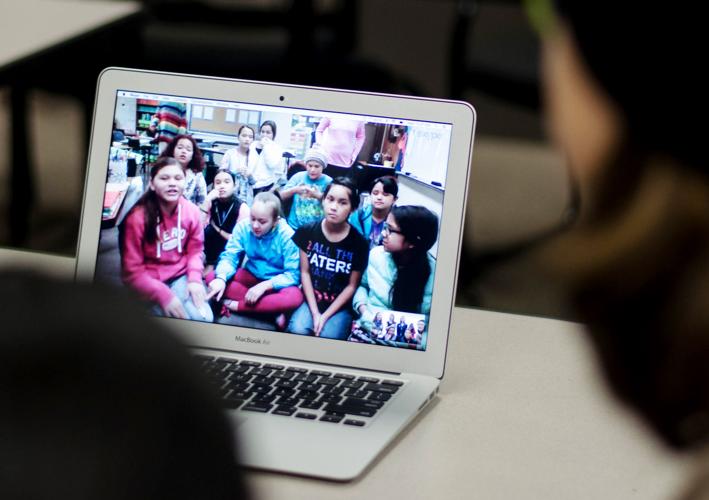 Ivette Bayo Urban (top right), lead facilitator and PhD student of the information school, along with other volunteers in pipeline project is skyping with kids they have been working with from Neah Bay Elementary School during their meeting on Wednesday February, 25.

Since 1997, the Pipeline Project has given UW students the opportunity to tutor and mentor K-12 students in Washington. Through its latest project, UW students gain something in return: a personal understanding of local Native American culture.

Six students are currently working on a documentary film project called “Telling Our Stories” with the Native American community in Neah Bay.

Through the Pipeline Project, UW students establish connections with fifth-graders in the Neah Bay community and mentor them throughout the year. The students learn about the history and culture of the Makah people while encouraging children to value cultural traditions and pursue higher education.

“The main goal for the project is to allow the fifth-graders a chance to express themselves in a creative way,” said Kaia Barth, UW senior and one of the six volunteers in the group. “They get to explore their own cultures, their own place in the world, and their own goals.”

The kids have been working on research projects about their community in preparation for the video. Christine Stickler, director of the Pipeline Project, said these projects have improved their writing skills and prompted them to think more deeply about what their culture means to them.

“It’s an amazingly powerful way to have breakthroughs in kids’ writing,” she said.

At the end of the year, the kids from Neah Bay will come to the UW campus to attend a screening of the documentary. While at the UW, the kids will take a tour of the school, see Husky Stadium, and learn more about future educational opportunities. This year’s screening will be June 5, and both the UW volunteers and the Neah Bay kids look forward to spending time on campus together.

“It really allows a type of learning and connection to a community that you’re not going to get in a classroom,” Barth said.

At last week’s meeting, the UW students Skyped with the Neah Bay class. The fifth-graders asked about final exams and essays, and both groups expressed how much they miss each other. The volunteers knew each child by name, noticed new haircuts, and asked about current school work. The kids clapped and cheered when they heard the UW students would be visiting later this month.

Both the UW students and the Neah Bay kids benefit from the partnership: While the students develop their leadership abilities, the kids meet new role models and learn about college.

“I got into the program because I want to improve my mentorship ability,” UW junior Julianne Ha said. “This is an opportunity to expand these kids’ possible futures and best set them up for what they want in their lives.”

UW senior Jahira Teague said the project has allowed her to understand her future goals as an educator.

“I felt like this project was a really good example of what I want to do as a teacher: to look at the child as a whole and help them embrace their culture,” she said. “Culture really influences their education; they go hand in hand.”

Not all of the volunteers are interested in careers in education, however. Their majors include linguistics, early childhood and family studies, comparative history of ideas, and biochemistry.

Ivette Bayo Urban, a graduate student and the lead facilitator of the project, explained that this helps introduce the fifth-grade-students to a variety of career paths and educational disciplines available to them in college.

Cassie Halls, UW senior and a recipient of this year’s Mary Gates Leadership Award, said while the volunteers have different majors, backgrounds, and plans for the future, their passion for education and culture has allowed them to form a strong bond.

“I’m graduating soon, so meeting with this group every week has been really special,” she said.

Throughout the year, the UW students and Neah Bay kids stay in touch by exchanging postcards and sending emails. The students recently sent videos to the class presenting their favorite places on campus, including Red Square, the HUB, and the Allen Library.

The group strongly encourages other students to volunteer with the Pipeline Project, saying the community has made them feel like part of a family. Barth recalled her first trip to Neah Bay during a camping trip, where she was impressed by the natural beauty of the area, and said her appreciation for the region has grown because of the “Telling Our Stories” project.

“This project has allowed me to learn not just about [Neah Bay] and the natural beauty, but also the people who have called it home for thousands of years,” she said.

For more information or to learn about applying for the 2015-2016 “Telling Our Stories” project, contact the Pipeline Project at pipeline@uw.edu.