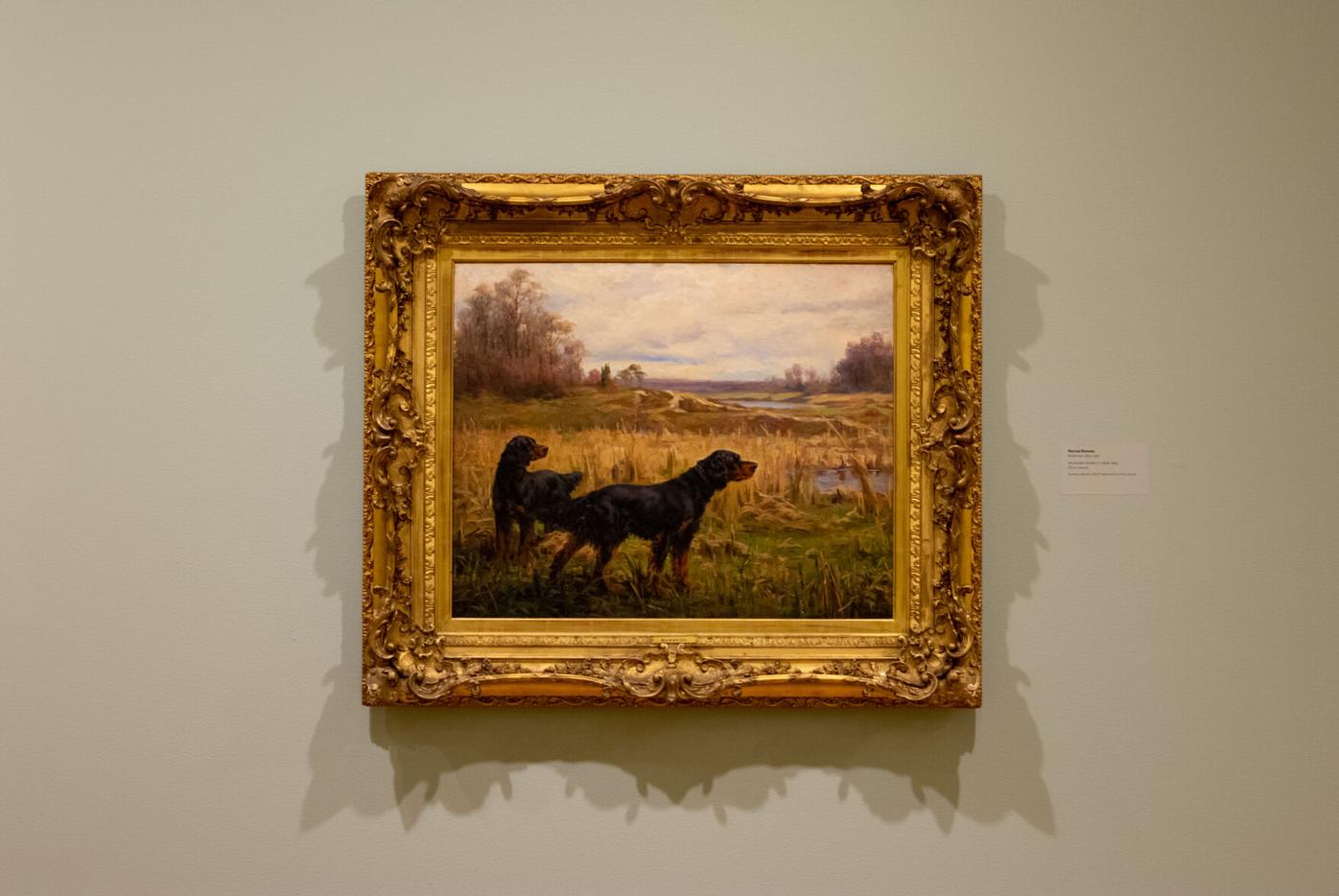 Work of Percival Rosseau, "Two Gordon Setters in a Field," 1904. 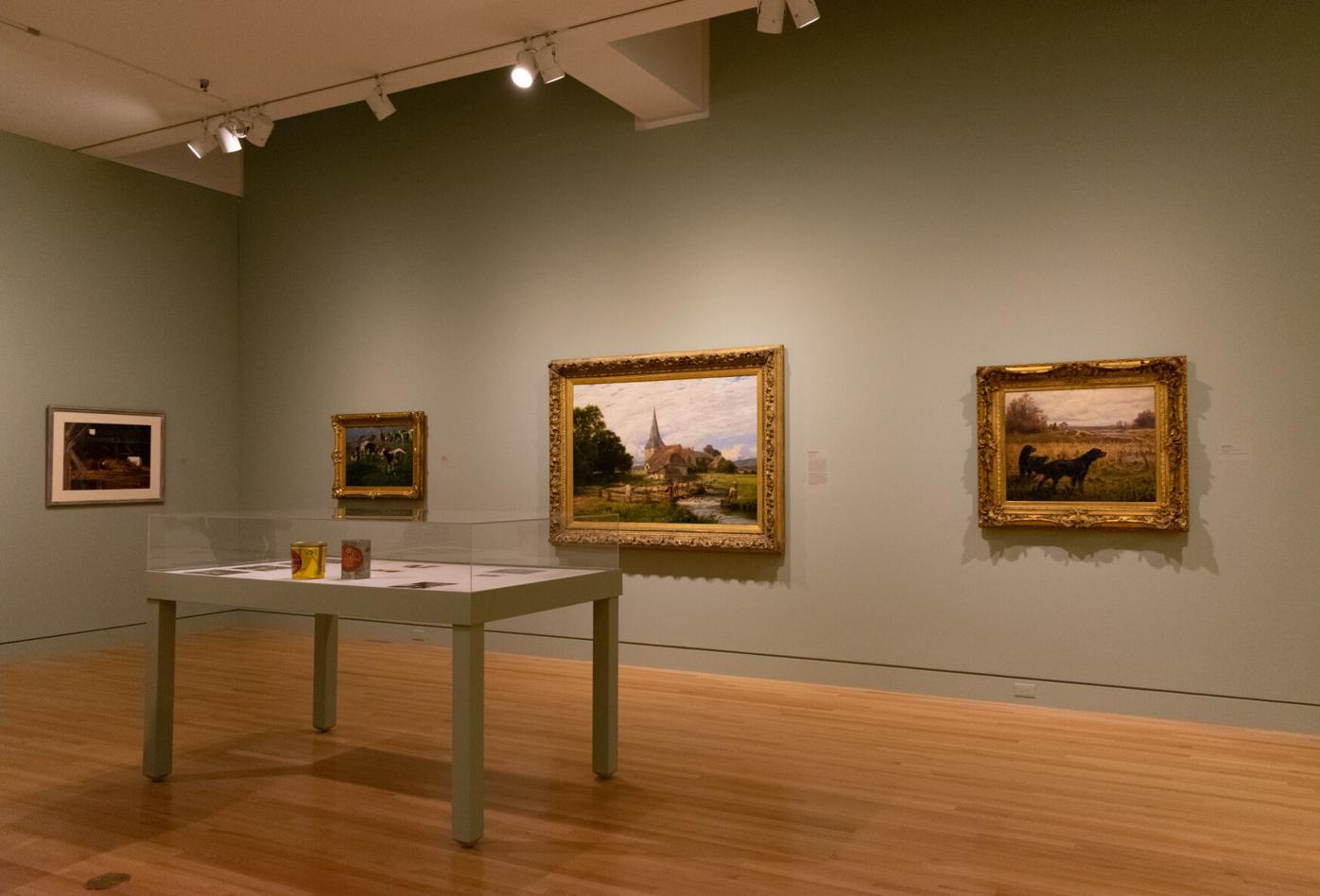 “Human Nature, Animal Culture” at the Frye Art Museum explores the relationship between animals and humans through a collection of paintings from the late 19th and early 20th centuries. These paintings, a handful of which focus on domesticated animals, prompt attendees to reconsider the role of animals in our daily lives. Key ideas prompted by the exhibit include humans distancing themselves from animals — more often than not, humans see themselves as outside of the “animal” label — as well as the farm-workplace relationship between animals and humans and how animal labor has enabled urbanization.

The exhibit has a fitting place at the Frye. The museum’s founders, Charles and Emma Frye, ran a successful meat packing business that allowed them to collect paintings of farm animals. This history of the museum is integrated into the exhibit in the form of a table in the second gallery that holds photographs and artifacts from the Frye’s meat packing business.

“To me, what’s very interesting is the juxtaposition between these very happy, utopian, idyllic images of farm animals in the Frye’s collection, and the fact they made their money in order to afford this collection by basically slaughtering, processing, and selling animals,” Kathleen Chapman, associate professor of art history at Virginia Commonwealth University and curator of the exhibit, said.

In this way, Chapman explained, it allows the audience to consider food production, drawing attention to the fact that outside of farm life, you don’t just “see” cows anymore — equating our increasing industrialization with the growing distance between human populations and food sources.

Despite the notion that landscape paintings of cows may be boring or over-shown in museums, through deeper consideration of the subjects at hand, Chapman found that the works take on another meaning. Initially, Chapman considered the growth of visual interest in animals.

“First of all, I was thinking, it’s coming out of the landscape tradition,” Chapman said. “It’s interesting how animals became front and center over the course of the 19th century.”

This is evident in the progression of the exhibit from the first gallery to the last. The artists begin to emphasize the animals as their subjects, with some paintings leaving human faces blank without detail, placing spotlights on the animals instead.

In curating the exhibit, Chapman’s focus shifted as she paid attention to the many pieces depicting humans and animals working together. This was the basis for the ideas of “work” and “culture” embedded in the exhibit — as seen in Heinrich von Zügel’s “Old Man Asleep with Sheep,” circa 1870s.

“The one sheep is obviously bleating at him, and there’s some connection that they’re making, and there’s this sense of trust,” Chapman said in regards to the artwork. “The fact that the dog and the man seem to want to relax, and the sheep wants something. There’s some kind of a collegial relationship, almost, among these different creatures.”

There is a considerable presence of cow paintings in the exhibit, which led to an exploration of the nature of this animal.

“What does a cow do all day?” Chapman asked. “Basically, they’re supposed to eat until they get big enough to kill. And they never have time off, because everything a cow does in an industrial kind of a context is their work.”

This contrasts the peaceful thoughts brought on by the visually appealing paintings.

“During the 20th century, the Frye’s were collecting these images of animals that were what a lot of people think about in terms of ‘flourishing,’ because they can make their own decisions,” Chapman said.

These decisions refer to cows being able to be present with sheep — a surprising relationship, because cows and sheep naturally do not get along. In the paintings, however, cows and sheep are seen walking, working, and traveling home together in a clear display of camaraderie. This relationship seems to stem from the circumstantial labor setting.

A reflection on the role of animals in our human history with appealing paintings of animal landscapes, “Human Nature, Animal Culture” can be viewed from June 12, 2021 to August 21, 2022 at the Frye.