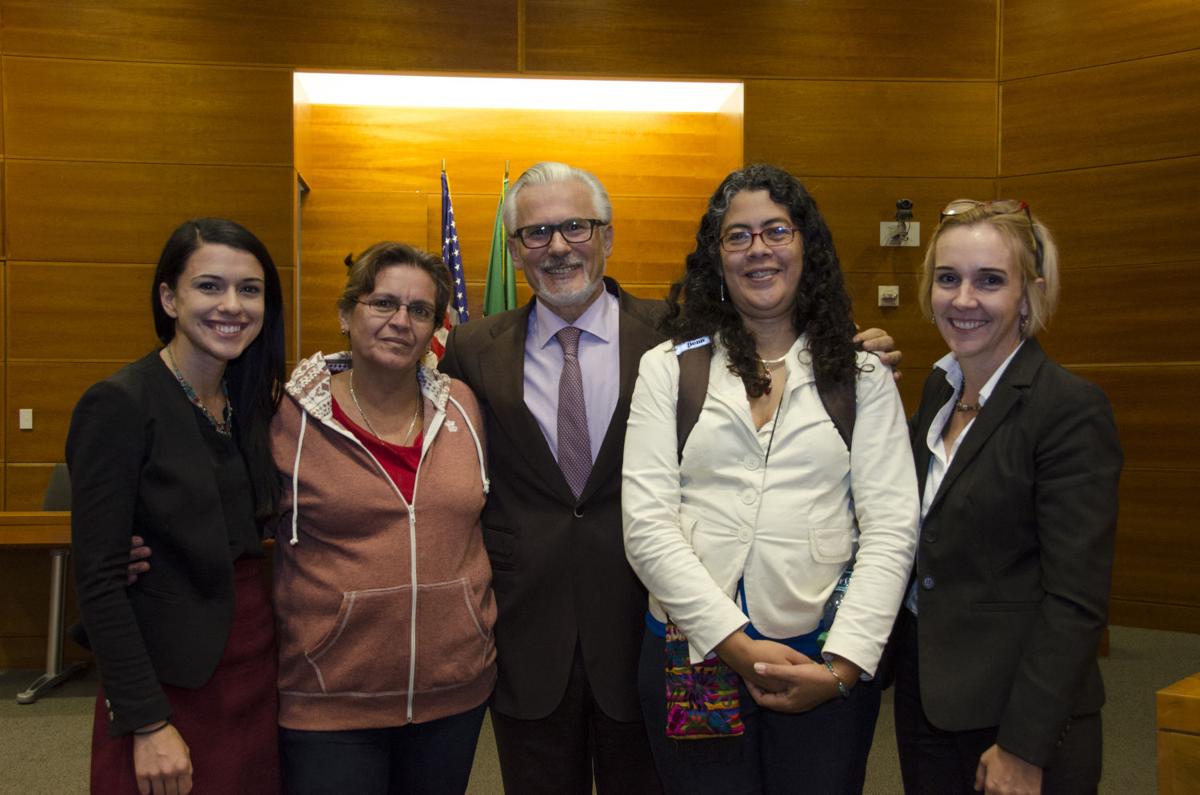 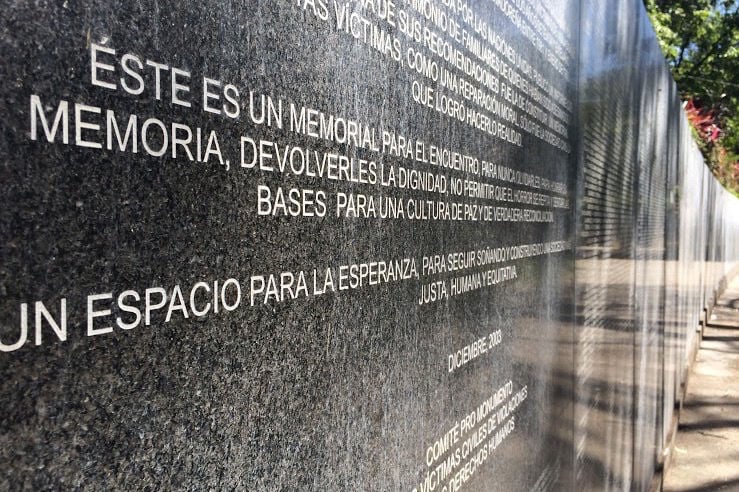 The Monument of Memory and Truth, located in San Salvador, commemorates only a fraction of the 75,000 civilians killed during the state's civil war that lasted from 1980 until 1992.

The Monument of Memory and Truth, located in San Salvador, commemorates only a fraction of the 75,000 civilians killed during the state's civil war that lasted from 1980 until 1992.

In November 1981, Dina Cabrera fled the small town of Santa Marta in El Salvador while it was under attack by government soldiers. Wounded from bullets and shrapnel and five months pregnant, she hid for three weeks while soldiers hunted down and executed other fleeing civilians.

Day and night soldiers routed out residents of Santa Marta and nearby towns, shooting citizens on sight. She recalls smelling an odor like cooked meat, it turned out to be the piles of bodies that soldiers were burning.

Cabrera survived the Santa Cruz massacre. Others were not as lucky.

She spoke about her experience last week at the UW’s Center for Human Rights “Access to Information as a Human Right” conference. The center also officially announced that it will be suing the CIA over alleged failings to properly release documents related to massacres, like in Santa Cruz, that occurred during the state’s brutal civil war in the 1980s.

While the war ended over two decades ago, the team is still searching for answers to seek justice and closure for the victims of these massacres.

The team hopes to access such information through the Freedom of Information Act, which gives citizens the right to petition the federal government to disclose previously unreleased information and documents. As part of their research, the Center for Human Rights has added to the body of evidence suggesting that the U.S. government lied about the extent of its involvement in the conflict.

The Center for Human Rights is specifically seeking CIA files on retired Salvadoran military officer Sigifredo Ochoa Pérez, the alleged commander of the harrowing counterinsurgency operation in Santa Cruz. Pérez received training at the Inter-American Defense College in Washington, D.C., and allegedly led a battalion of soldiers trained by the United States.

“We make Freedom of Information Act requests of many government departments, but the CIA is the least transparent,” said Angelina Godoy, director of UW’s Center for Human Rights. “There’s no typical response from them. They’ve said the documents don’t exist, then claimed that searching for them would be too burdensome.”

Since 2013, researchers made up of faculty, undergraduate, and graduate students have worked to uncover information about these massacres and find out what happened to those killed or kidnapped by the Salvadoran military. While the project, “Unfinished Sentences,” has given closure to several families with information obtained from the country, they still need more information that the CIA refuses to provide.

Now, and after years of delay and refusal to release information, the agency will have just two months to officially respond to the war crime allegations.

The massacre in Santa Cruz killed hundreds, and estimating the exact amount of deaths is nearly impossible because so many records of the event were lost or destroyed. However, it was only one of many such killings that occurred during the state’s bloody civil war between military forces and guerrilla leftists that caught citizens like Cabrera in the crossfire.

Godoy argued that the U.S. government has a moral responsibility to support the mission of truth in El Salvador, especially where their involvement is concerned.

While the lawsuit has taken the limelight at the Center for Human Rights in the last few weeks, the center also addresses other human rights projects in El Salvador.

“One project I’ve been involved in is creating a digital online archive for survivors of the war,” said Philip Neff, the Project Coordinator at Unfinished Sentences. “It was a surreal experience when I went to the communities where the testimonies were drawn from and actually met those people. You feel like you know a person from the story you put together, but when you meet them in person, you really get to know them.”

As important as the center’s work is, no one group -— let alone person — can do it alone. Seattle is home to many foundations and organizations dedicated to philanthropic and humanitarian efforts in Central America. One of those organizations, the Seattle International Foundation (SIF), is closely tied with the UW’s Center for Human Rights.

SIF has supported the center’s work for several years and promotes human rights work in Central America. They’ve awarded more than $8 million to organizations throughout the region since 2008.

“We always focus on the people, the leaders. The people doing the hard work and inspiring others in the communities,” said Mauricio Vivero, the CEO of SIF and a professor at Seattle University. “When you’re a student in a poor school in El Salvador, facing gangs and a lack of school resources, your opportunities are diminished substantially. These local leaders are the ones who make progress with those issues.”

The researchers at the Center for Human Rights are some of those leaders. And for them, the hours spent on research and scouring documents are worth every second.

“When we share something that tells us what happened to those related to the survivors with their families, it’s the most gratifying feeling in the world,” Neff said.