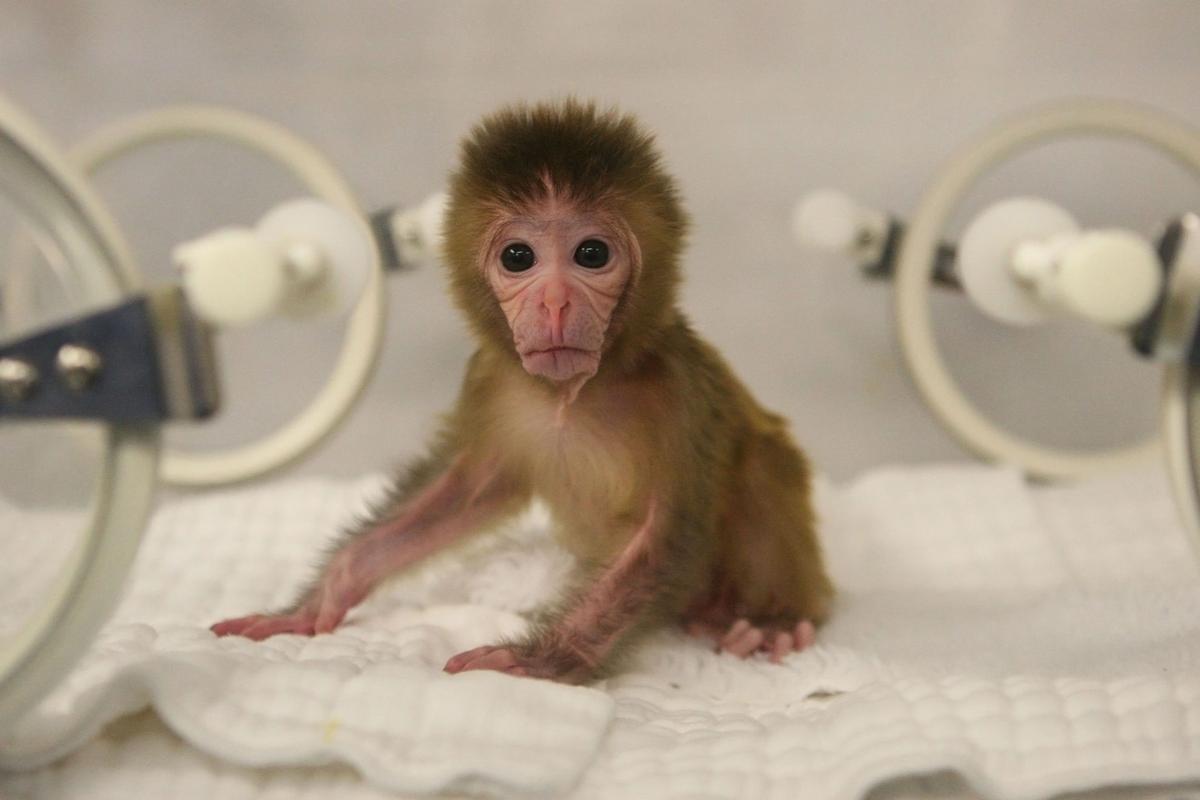 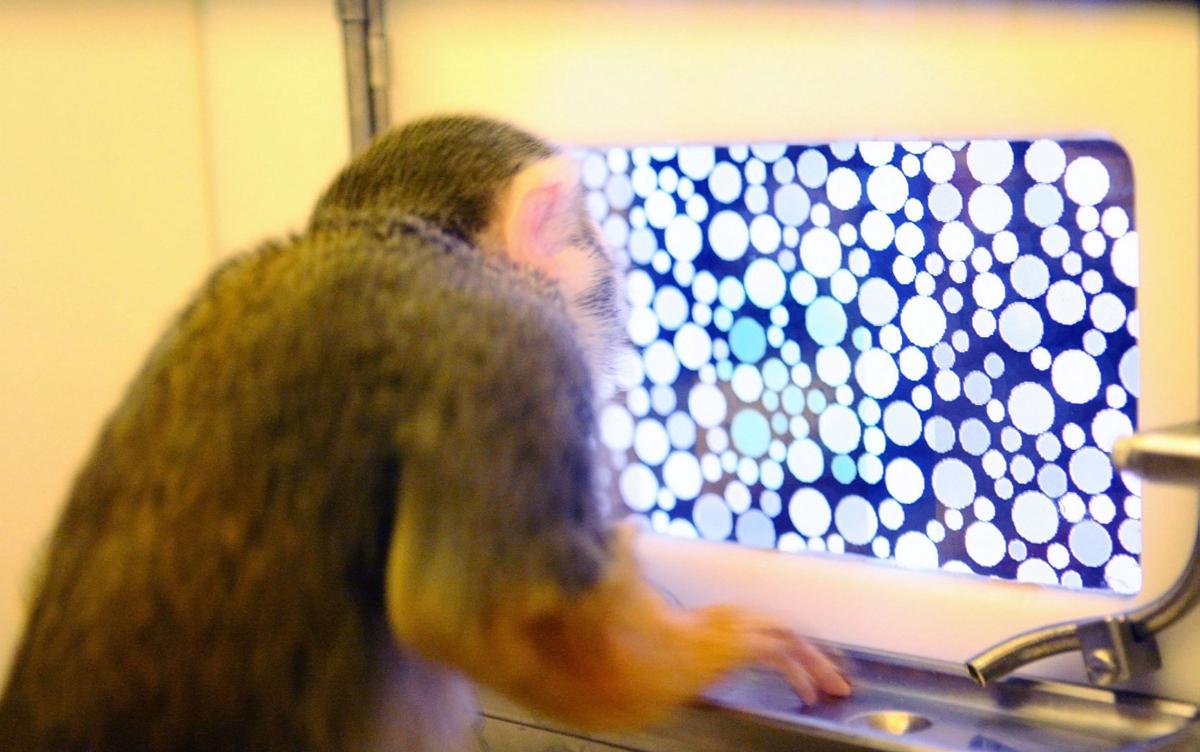 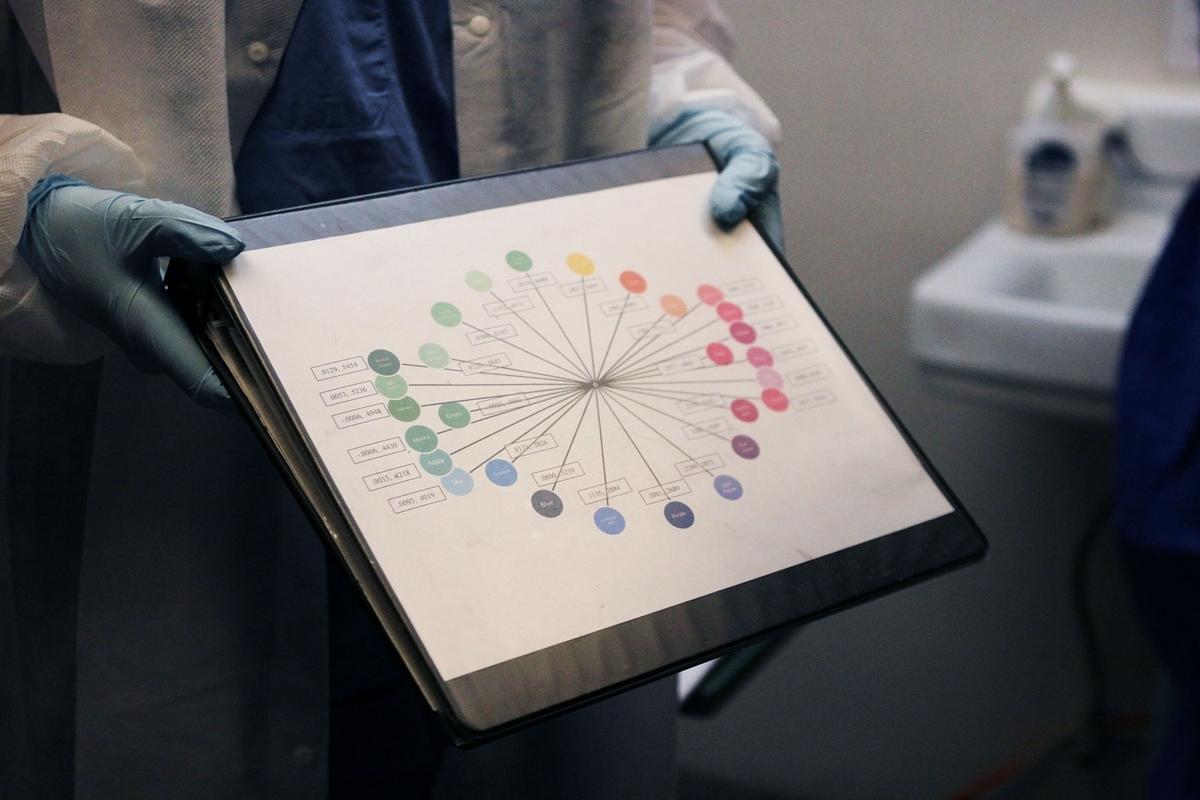 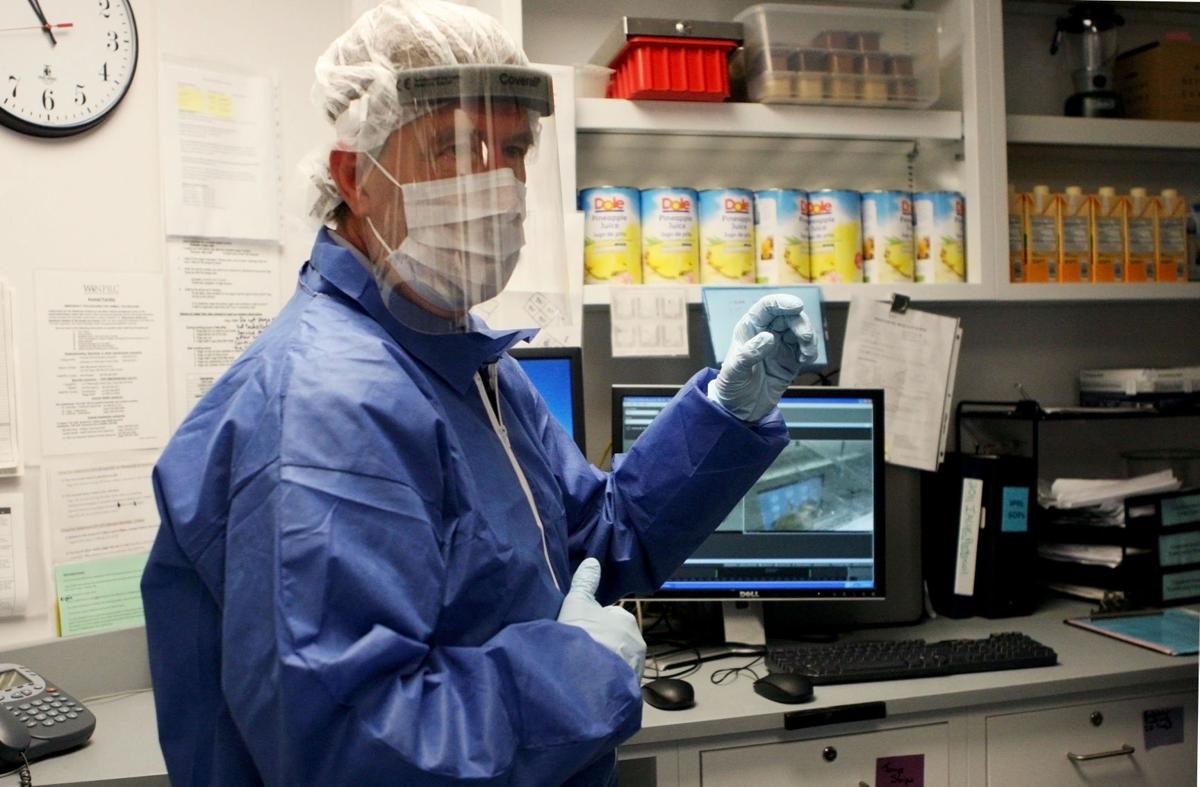 A male squirrel monkey named Sam sits in front of a computer monitor, staring intently at a composite of different-sized dots on the screen. Monkey and computer are housed in a large metal box, the interior of which is lit by the monitor. The rest of the room is dark.

Illuminated by the screen, Sam, with visible dexterity and intense focus, repeatedly bobs his head down and taps where he sees a certain colored dot on the computer screen; today, some of the dots are red. Sam was born red-green colorblind, as are most male squirrel monkeys, but that hasn't hindered his ability to see the red dots since 2009, when researchers at the Washington National Primate Research Center (WaNPRC) injected a pigment gene into his retinas that allows him to see colors he never before could.

Sam has been able to see red and green for four years. Jay Neitz, one of the lead researchers working on the study Sam participates in, said he hopes the effects of the gene therapy are permanent. It took several years to train Sam to participate in the dots test, but he's now a pro at it. Monkeys participating in the study are shown a variety of different-colored dots in order to assess the colors they can or can't see. The gene therapy performed on Sam is designed to target vision disorders caused by abnormalities in cone photoreceptors in the eyes, the types of vision disorders that are often curable.

Vision research is also conducted with infant monkeys in WaNPRC's Infant Primate Research Lab (IPRL), the only lab of its kind in the country. Mike Mustari studies both visual system development in infant monkeys and how the system interacts with eye-movement development and eye alignment. In the future, he also plans to research the coordination of visual, oculomotor, and reaching development. He said about three to five percent of kids in America are born with problems in their visual systems and eye alignment.

"What we do is directed at understanding how our children who have eye alignment problems are best treated," Mustari said.

Another goal of his research is to learn what sensorimotor processes and neural mechanisms contribute to the development of amblyopia, a vision disorder that can develop when one eye does not align properly. In people with amblyopia, the optics of the eye are normal but the brain ignores the eye's signaling, causing it to lose visual function.

Mustari said one of the most important findings from the work done at WaNPRC is the knowledge that a sensitive period exists during development.

"There's going to be an optimal time to make a treatment for a child," Mustari said. "If a child has a problem, you don't want to wait until they're three or four years old to intervene. Because your intervention may be helpful, but you've moved out of the most important time period for treating the kid."

The studies conducted by Neitz and Mustari make up a small portion of the total ongoing research at the center. Researchers also study HIV/AIDS, other infectious diseases, systems biology of nonhuman primates, and neuroscience, among other topics.

Dave Anderson, director of the center, said much of the research at the center is a team effort conducted in order to gather as much information as possible on a specific topic.

Euthanasia and tissue examination make up the final step of some of the studies conducted at the center. Tom Burbacher, a researcher in the IPRL, said euthanasia of the primates is always the hardest part of research. Most people who interact with the monkeys become attached to them, yet euthanasia is often a vital part of the research process when a study's results hinge on the examination of brain and other tissue.

The center actively works to minimize the number of monkeys used in research experiments. One way of doing so is through WaNPRC's involvement in an extensive monkey tissue exchange. If an experiment calls for research monkeys to be euthanized at the end of its duration, their tissue is made available for researchers pursuing other projects. Anderson said this arrangement allows the center to greatly reduce the amount of monkeys used.

"For every one of those animals that goes to that tissue program, we average supporting eight different laboratories with those tissues," Anderson said. "That means that those other seven laboratories would not need to buy an animal and do a research project to be able to get access to information."

Anderson said the process to begin research with nonhuman primates is extensive and time-consuming, which also helps minimize the number of monkeys used in research. Before a researcher is allowed to conduct a study with monkeys, he or she must prove to the UW's Institutional Animal Care and Use Committee (IACUC), in an 18-page form, that the research proposal is both important to the human population and cannot be successfully conducted without using monkeys. Anderson said he feels primate research is vital to human medical advances.

This April, an animal-rights group called Stop Animal Exploitation Now (SAEN) publicly filed a lengthy complaint against WaNPRC for about 20 previous monkey injuries and deaths, suddenly placing the center in the spotlight.

"If [SAEN] hadn't performed this investigation, the general public would not be aware of the number of primate escapes, traumatic injuries, and situations where primates have been allowed to become severely debilitated," said Michael Budkie, executive director of SAEN, in an April interview. "Those are the kinds of things that don't come to light unless some organization takes time to go through all of the info that's available."

Such complaints are not uncommon, though: Anderson said he and the rest of the center's staff expect them annually. Transparency, however, is especially important now and is something Peggy Smith, assistant director of the center, said she and Anderson have been working on for the past seven years.

In SAEN's most recently complaint, the organization listed cage escapes, partial tail amputations, deaths, and one incident where a monkey managed to obtain a pair of scissors as reasons pointing to the unfitness of the center to properly care for nonhuman primates, suggesting negligence on the part of the WaNPRC staff. Anderson argued these incidents were all known and self-reported by the staff at the time, and were not severe enough to report to the government.

"There's just no way to run a program, a credible program, in this day and age without a commitment to appropriate animal care, and that's what we have here," he said.

Shortly after SAEN's complaint went public, a researcher at WaNPRC received a threatening email. UWPD said in a report that they investigated the case and identified who sent the email but, since they determined the researcher was not in any imminent danger, closed the case. While Anderson feels many people within the animal-rights community are simply concerned about the treatment of research animals, he also feels the general public underestimates the intentions of extremists.

"The idea that's it's just a bunch of well-meaning people who might object to animal research is completely inaccurate," Anderson said. "It's a very active community that is using threats and intimidation to try and impose their perspective on both the public as well as the researchers here."

Both Anderson and Smith stressed such complaints take attention away from the important research at the center, and the impact that research can have on human lives.

Many of the people at the center, administrators and researchers included, have personal stories that tie in with the importance research with nonhuman primates has for them. Anderson credited advances in medical research like those made at the center as a reason for the long, mostly healthy lives of his grandparents, who recently died at 96 and 100 years of age. Burbacher himself is functionally blind in one eye - a result of amblyopia, the visual disorder Mustari studies.

"[Doctors] didn't find out about it until too late; I wore a patch," Burbacher said. "Kids don't suffer that fate any longer. Now [doctors] have this basic information that we need to test kids' vision early. You can be able to intervene, make a difference."

For Smith, treatment methods developed in the IPRL - such as how to prevent lungs from sticking together during inhalation and exhalation, and how to keep preterm infants warm without harming them due to their fragility - are largely responsible for saving the life of her son, born three months premature with holes in his lungs, bronchopulmonary dysplasia, and heart problems. He was monitored at the UW's Neonatal Intensive Care Unit in an isolette - the same type used for infant nonhuman primates in the IPRL. Smith's son, now 28 years old, survived despite Smith being told multiple times he wouldn't.

Smith said the experience of seeing how research with nonhuman primates could be used to cure human medical conditions, particularly those of her son, convinced her of the importance of animal research despite the negative connotations that often surround it.

"If they could save my son, I didn't care what had been done in research," Smith said. "Your ethics become clear when you're faced with a real-life situation. ... I understand [animal-rights] activists have a point of view, they have their own reasons like I have mine. The science and facts of research speak for themselves, in my mind."