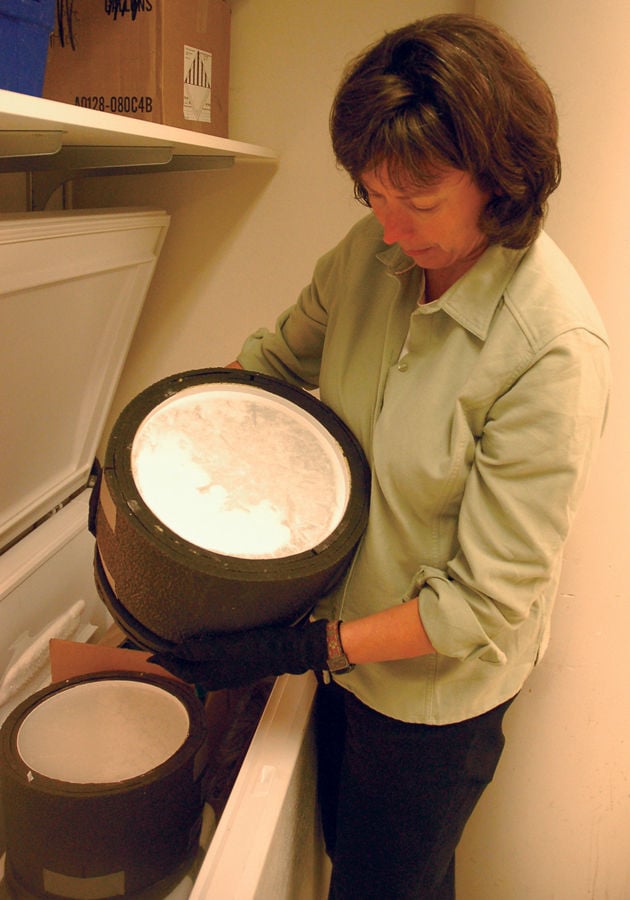 Bonnie Light holds up a container full of a frozen halite solution. She is hoping to learn more about the precipitation, accumulation and movement of the hydrohalite crystals. 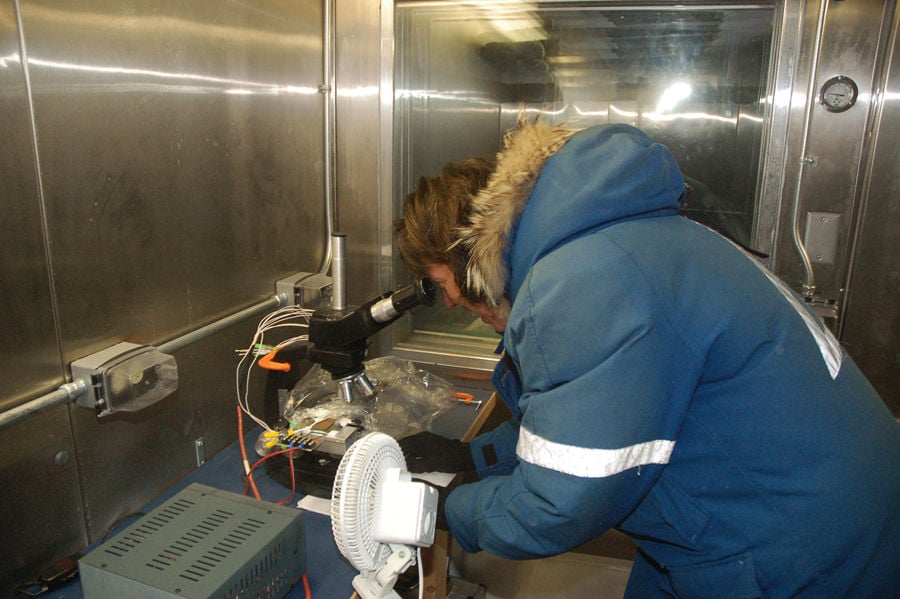 In the Snowball Earth lab, Bonnie Light peers through a microscope at inclusions of liquid brine that migrate under a temperature gradient.

Bonnie Light holds up a container full of a frozen halite solution. She is hoping to learn more about the precipitation, accumulation and movement of the hydrohalite crystals.

In the Snowball Earth lab, Bonnie Light peers through a microscope at inclusions of liquid brine that migrate under a temperature gradient.

And you thought January was cold.

As bad as some would claim to have it, winters in the Northwest pale in comparison to conditions 600 million years ago, when the Earth is thought to have been in the midst of a global ice age.

The idea has existed for more than half a century, but it was not until 1998 that Cal Tech geobiologist Joe Kirschvink coined the term "Snowball Earth." Since then, a body of supporting geologic evidence has accumulated, indicating phenomenon as peculiar as glaciers at sea level in the tropics.

"The beauty of Snowball Earth is that it explains a whole lot of strange things," said Stephen Warren, a UW professor of atmospheric sciences and earth and space sciences. "It's worthy of study simply as a possible stable climatic state."

Bringing scientists from a variety of disciplines together toward a coherent theory, the hypothesis breeds a unique blend of consensus and controversy.

In the depths of the snowball climate, evidence points toward the presence of glaciers at sea level, a dramatically weakened hydrologic cycle and relatively few hotspots for life.

"The geologists agree that there were glaciers at sea level in the tropics," Warren said. "Despite that agreement, Snowball Earth is still not generally accepted by the community."

Much of the disagreement comes over paradoxes that prevent scientists from fully merging the geologic evidence with model projections and theory. Warren smirked.

"A paradox means something is wrong. That's an ideal prospect for discovery," he said.

Warren's research relevant to Snowball Earth has focused on the optical properties of cold surfaces, such as measuring the amount of light that reflects off of the snow and ice.

A few years ago, Warren and Bonnie Light, a researcher at the UW's Applied Physics Laboratory (APL), discussed a particular dilemma in the Snowball Earth community: How did life survive such harsh conditions?

Cooled far enough to get glaciers at sea level, models built with modern-day snow and ice properties produce thick sea ice over the entire ocean. At thicknesses of several hundred meters, light levels required by photosynthetic life would not reach the bottom of the ice. Life did survive, encouraging scientists to re-examine their observations, models and theoretical considerations.

Growing ice from salt water in a negative-30 degree Celsius cold room laboratory at APL, Light and Warren set out to improve understanding of sea ice on Snowball Earth.

"Ice grown at negative-30 does not look like modern sea ice," Light said. "Today, ice is often covered by snow and rarely gets that cold. Nobody has taken a close look at how these properties are changed."

Sea ice forms from the surface downward. During formation, the salt in the water is rejected into brine pockets within the ice. As the temperature drops, these inclusions get smaller and more concentrated

"Below negative 23 Celsius, some of the salt precipitates out of the inclusions," Light said. "Eventually, they can end up on the surface of the ice, causing distinct changes to its optical properties."

In regions where ice sublimates, a phase change skipping straight from solid to vapor, the precipitated salt may appear on the surface of the ice, as a fine white powder. This can change how much light the surface reflects, which in turn impacts photosynthetic life living below the ice. Light and Warren hope to make precise measurements of this and other properties, one outcome being to improve the treatment of sea ice in climate models

Biological refugia likely existed on the Snowball Earth, in oases of open water or transparent ice that would have allowed for continued photosynthesis. Isolated, these centers of activity would have encouraged diversity and promoted evolution over time. Some creatures, however, would have preferred the ice, taking advantage of its unique properties.

Karen Junge, another researcher in the Polar Science Center at APL, studies cold-loving bacteria, which are single-celled organisms lacking specific structures to house their DNA. Collaborating on a study with Hajo Eicken of the University of Alaska-Fairbanks, Junge investigated how bacteria relate to the subzero environment.

"We asked whether the bacteria are active and how they relate to their icy environment," Junge said. "We developed a method to look inside the ice without melting it, and found that the cells which are active are attached to particles."

Latching onto the ice surface served as an adaptive means to enhance survival. Using this strategy, bacteria respired and grew at temperatures as low as negative 20 degrees Celsius. After showing the possibility of survival with field samples, Junge turned to laboratory experiments.

"Using lab strains of bacteria, we determined at what temperatures they could produce proteins," Junge said. "The data showed that radioactively marked amino acids get incorporated into proteins at negative 80 degrees Celsius. It indicates that biological mechanisms are still functioning."

It seems the cold proved no problem for bacterial life on Snowball Earth. For eukaryotic life, the nucleus-bearing life from which higher life forms would evolve, exposure to light and nutrients would have been far greater concerns. That's where Warren surmises that coastal areas near volcanism and shallow seas analogous to the Mediterranean may have been important.

Eight hundred million years ago, the Earth sat at the midpoint in the Neoproterozoic era, a division of geologic time characterized by supercontinents and simple, single-celled life. As landmasses drew together and drifted toward the equator, the climate cooled

When land came to dominate the tropics, much of the sunlight entering the Earth system was reflected back to space. With less energy to heat the planet, the climate chilled, encouraging the growth of sea ice.

Sea ice also has a high albedo, interacting with temperature to form a climate feedback loop, which is critical to sending the Earth into a global ice age.

Feedback loops can be positive or negative, amplifying or damping a systems response to a signal. Public address systems use positive feedback to their advantage, amplifying sound for the purpose of projection.

But feedbacks are not always so stable. Anyone familiar with the uncomfortable screeching of a microphone or guitar picking up its own output from a speaker is familiar with an unstable, runaway positive feedback.

Encased in ice, the Earth would have been reflective and frigid. However, volcanoes would have continued to erupt, gradually blanketing the planet with carbon dioxide. Eventually this would cause the Earth to warm, melting the ice but simultaneously sending the planet's climate toward sweltering conditions.

Fortunately for life on modern Earth, another snowball state is not in our future. The sun is now 6 percent brighter, negative feedbacks are in place to check catastrophic cooling, and human activity continues to force the climate with changes to the land surface and atmospheric composition, mostly in the positive direction.

Nevertheless, accurately comprehending the dynamics of the Earth's climate in the past has broad implications, like helping computer models more accurately portray the earth's climate system.

Although we may never know whether the Snowball Earth indeed occurred, the hypothesis acts as a catalyst for study of climate and geophysics. It bridges disciplines and emphasizes understanding the Earth not as a set of discrete components, but as a system.

"Considering Snowball Earth has forced me to learn a lot of things," Warren said. "It's been fun."