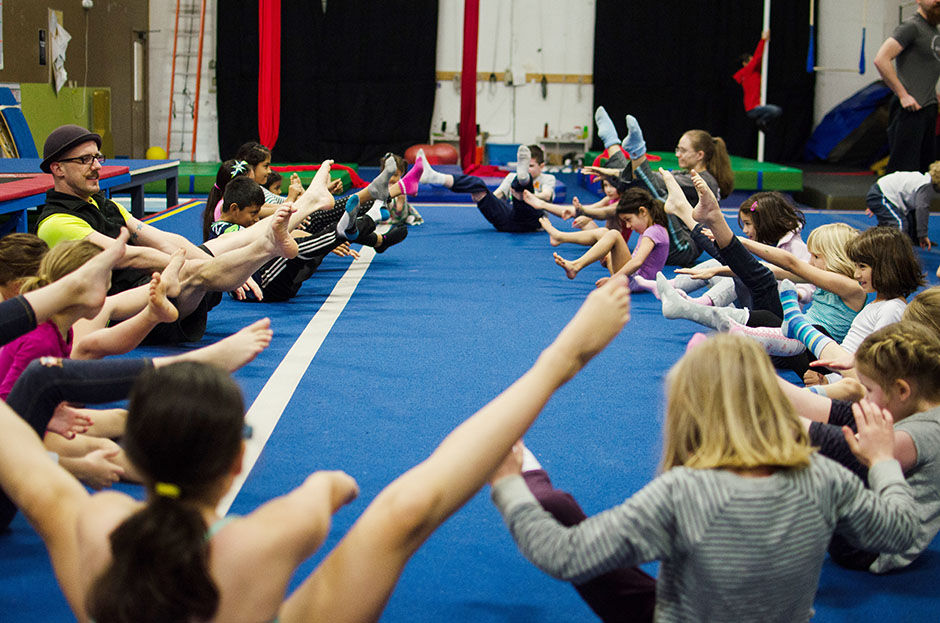 Nick Harden (far left) leads students through a warm up to get their muscles ready before splitting off into the different age grouped classes. 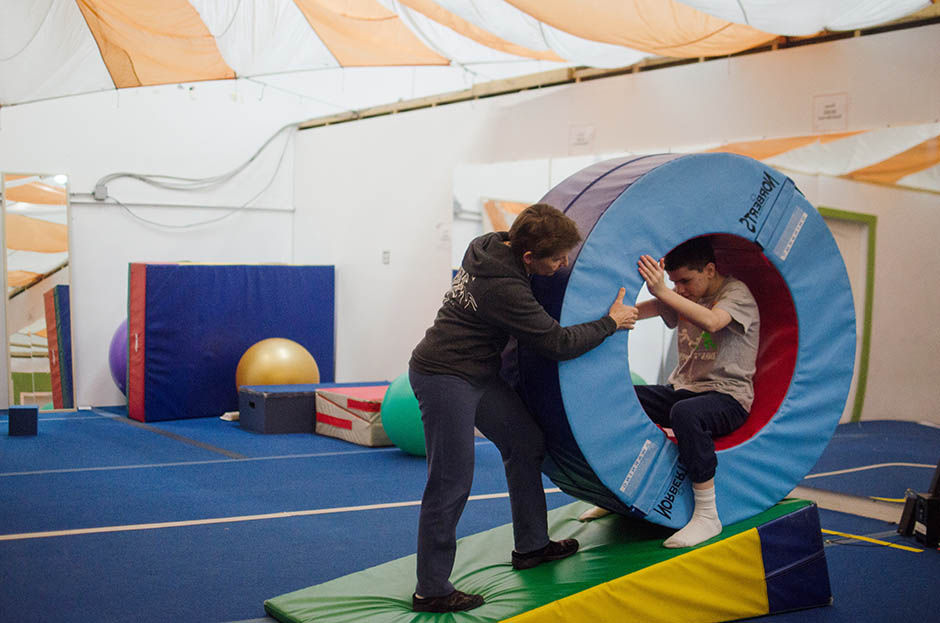 Jo Montgomery (left), founder of SANCA, teaching Seth Bogue (right) “Circus Physics” as part of the Every Body’s Circus program, which offers classes and camps to disabled youth and adults.

Nick Harden (far left) leads students through a warm up to get their muscles ready before splitting off into the different age grouped classes.

Jo Montgomery (left), founder of SANCA, teaching Seth Bogue (right) “Circus Physics” as part of the Every Body’s Circus program, which offers classes and camps to disabled youth and adults.

You don’t have to wait for the Ringling Bros. or Cirque du Soleil to come to town to catch a glimpse of the circus. Even better, you don’t have to be a trapeze or juggling master to participate in circus life either.

The School of Acrobatics & New Circus Arts (SANCA), located in Seattle’s Georgetown neighborhood, claims to be the largest circus school in the nation. Founded in 2004 with only five students, SANCA has now grown to serve more than 1,000 students in weekly classes and has served almost 50,000 people in all.

Some of these students include members of the UW community, such as database developer Jason Page, who works in the UW Information Technology department. Page grew up juggling and after hearing about SANCA’s classes from a friend, said he found a perfect fit.

“As soon as I walked in I knew it was nothing like the rest of Seattle,” Page said. “It was so friendly and I immediately fell in love with it. It’s all positive, no ego, no competition.”

Page spoke of the competitive nature he experienced while participating in other “fringe” physical activities, such as climbing or cycling, both of which tend to have welcoming communities, but can inevitably become competitive — a mindset he says simply does not exist at SANCA.

“In Seattle if you don’t like team sports there’s not a lot of options,” said Jo Montgomery, co-founder of SANCA with Chuck Johnson. “We offer an alternative. Part of it is the culture we’ve created here. It’s OK to fail because the important thing is to try, and to encourage others.”

Montgomery said the facility serves people of all ages and there is no skill limit.

Montgomery also leads the Every Body’s Circus school within SANCA, designed for youth with disabilities like spina bifida or visual or hearing impairment. These students work on the same basic skills every student aims to accomplish, with the added benefit of enhancing social skills specifically adapted to their needs. Every Body’s Circus partners with Seattle Children’s Hospital, where Montgomery is a nurse practitioner.

“You just have to work up the courage to swing once and see if you like it,” Montgomery said.

Montgomery said she has seen countless times how acrobatics classes enable first-time participants to get over fears of heights and perceived limitations of their bodies.

Amber Parker, a case manager with the UW Alcohol & Drug Abuse Institute, said SANCA has changed her both physically and mentally. She has been attending SANCA classes for eight months, with no plans of stopping.

Parker said after a life of poor body-image and self-esteem, she found solace in SANCA’s strength-and-flexibility and adult aerial classes, which encourage personal improvement instead of striving to be the best. She even started a blog called “The Fatcrobat,” as a testament to personal strides she has made in her physical ability and confidence because of unconditional support from SANCA classes and coaches.

“It’s changed my perspective on what I can actually do,” Parker said. “I never thought I could do anything like this, so now that I can it opens up the ‘I can do anything’ mindset. Nothing is off limits now.”

SANCA caters to professional performers as well. It often hosts gym time for performers from Teatro ZinZanni, or for artists in residence from groups such as IMPulse Circus Collective, The Acrobatic Conundrum, or Circus Syzygy.

Montgomery noted that when kids participating in classes see professional circus performers make mistakes, it shows them that struggling with a skill doesn’t have to be a disappointment, but can be inspiration for working toward personal goals at their own pace.

“Safety is huge here,” said Alyssa Hellrung, a part-time lecturer in the Gender, Women and Sexuality Studies department at the UW and an aerial trapeze coach. “But we do push kids physically and emotionally outside of their comfort zone.”

For those who have dreams of flying, the School of Flight program might be a good fit. Aside from SANCA’s main gym, which includes a tumble track trampoline, spring floors, climbing ribbons and poles, a “big top” and “tot room” for children, the trapezes are housed in an adjacent building designed for this literally high-reaching activity.

Hellrung sees SANCA classes as an opportunity for every type of person, regardless of body type or skill level, to learn what their bodies are capable of, and have some slightly unconventional fun.

“People assume that this is an insular world, but it’s not,” Hellrung said. “Not everyone feels sporty and this circus has room for everybody, even if you just want to learn to juggle. It still gives you the benefits of athletic activity without the pressure of having to compete at the end of every week.”

The circus often carries the stereotype of being a place for only those with strange skills such as contortionism, or having bizarre personalities. But SANCA strives to foster not only excellence in performance for most of its participants, but a personal confidence and welcoming environment over all else.

“I love telling people I’m in the circus,” Parker said. “Misconceptions open up dialogue. SANCA is really about fitness and community and connecting to other people.”