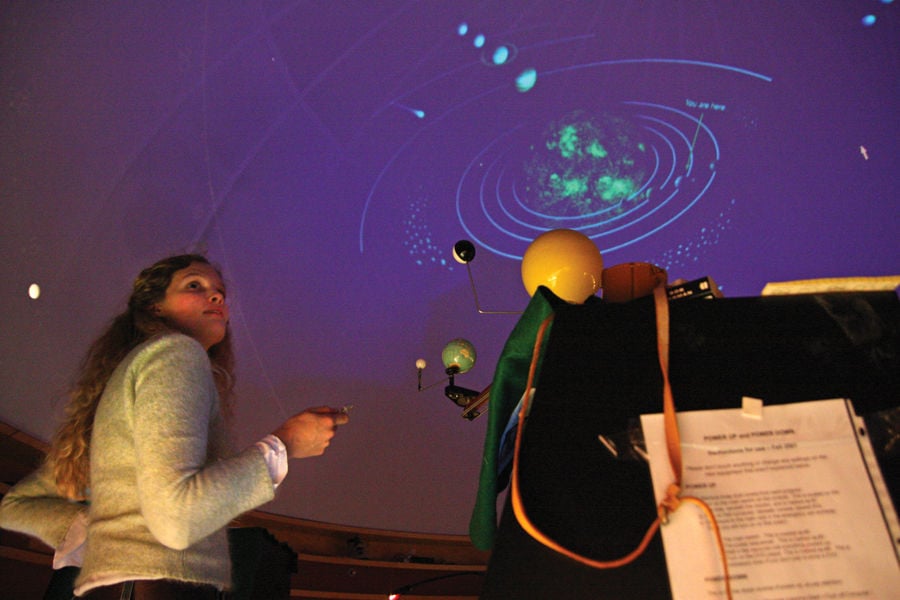 Charlotte Christensen, an astronomy graduate student, leads a presentation in the UW Planetarium Jan. 7. Each biweekly show has a specific topic; this week's was navigation. 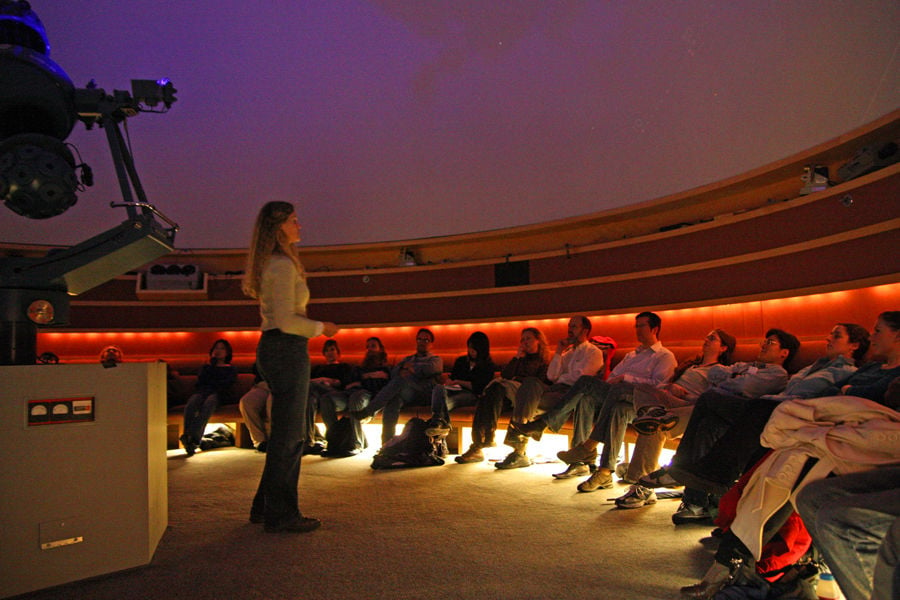 Christensen leads a presentation in the UW Planetarium, located in the A-building of the Physics-Astronomy complex. 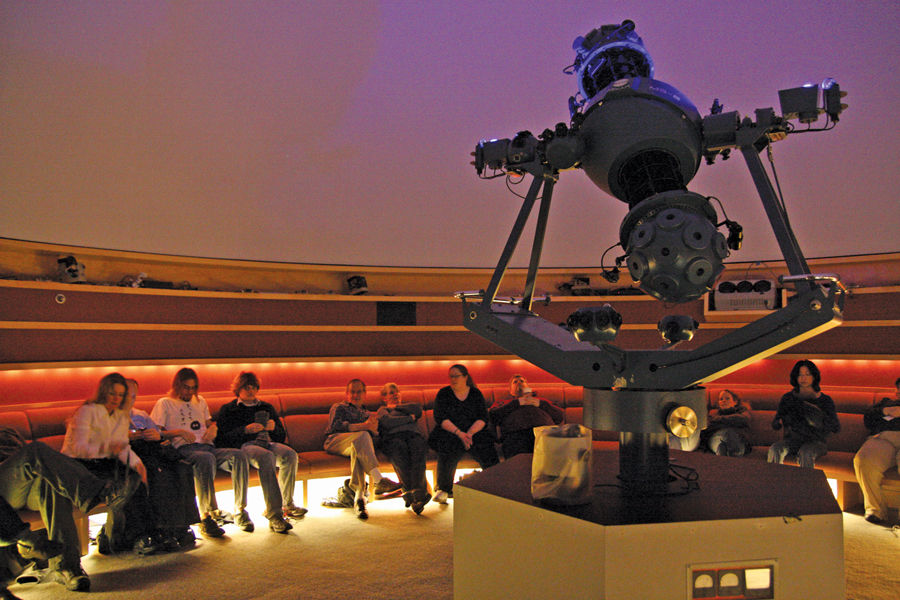 UW Planetarium presentations fill up weeks in advance with as many people on the waitlist as there are seats in the house.

Charlotte Christensen, an astronomy graduate student, leads a presentation in the UW Planetarium Jan. 7. Each biweekly show has a specific topic; this week's was navigation.

Christensen leads a presentation in the UW Planetarium, located in the A-building of the Physics-Astronomy complex.

UW Planetarium presentations fill up weeks in advance with as many people on the waitlist as there are seats in the house.

After dinner with a friend at a sushi joint on the Ave, I was briskly walking back to campus, dodging others carrying umbrellas and desperately wishing I had kept mine in my now-sopping-wet backpack. I was considering transferring to, oh I don't know, the Bahamas. One moment I'm hopping over small rivers flowing down the street, and the next, I'm reclining back, comfortably gazing up at a sky full of stars.

No, I didn't suddenly develop super powers and teleport elsewhere. I was still in Seattle - still on campus, in fact. The secret? Over in the Physics-Astronomy building, there's a planetarium which lights up its dome in a breathtaking display of the brilliantly-shining celestial bodies we call stars.

Every first and third Wednesday of the month, at 7 p.m. sharp, the planetarium gives a free presentation on varying topics.

The gentleman beside me was excited about tonight's presentation. He had been trying to reserve a ticket for the past couple of months and happened to finally reserve one for this presentation about navigation, coincidentally fitting for his career as a professional mariner.

Although Charlotte Christensen, a graduate student in astronomy, had presented many times before, this was her first time presenting about using the stars to navigate.

She began by describing astronomy's usefulness during sea voyages, where there aren't any landmarks, but only water stretching in all directions. The stars' positions can be used to determine latitude and longitude.

Growing up, I enjoyed going out on summer nights and finding the North Star. Locate Ursa Minor, or The Little Dipper, follow to the end of the dipper handle and there's the North Star, Polaris. This star remains fixed in the sky while the other stars rotate across the sky as time progresses.

Learning how to determine latitude and longitude was intriguing.

"Let's say the North Star now is at 90 degrees up in the sky," Christensen said to the crowd, using the projectors to position the star directly above. "So we're at the North Pole. If it's at zero degrees, we're at the equator. So what degree will [the North Star] be here in Seattle?"

"Can anyone tell me where they're getting these numbers?" Christensen said.

"From our latitude," said one gentleman.

It turns out that the number of the North Star's angle degree is the same number as the latitude of one's position. So, since Seattle lies on latitude 47, the North Star would be positioned at a 47 degree angle with the horizon.

So tricky in fact, that in 1714, Britain offered a prize that would equate to $4 million today, to anyone who could figure it out. It wasn't until nearly 50 years later that someone actually did. It required the invention of an accurate clock, one that wasn't affected by the humidity and temperature of a sea voyage.

The presentation moved on to other interesting things, such as how the Polynesians navigated using unconventional methods and how all the constellations appear backwards in the Southern hemisphere.

Toward the end, the audience piped up with questions, all of which Christensen managed to answer. "Why do constellations have Arabic names?" "Since the Big Bang created our universe, is it possible that other Big Bangs created other universes?" "Since the Earth was once thought to be flat, to what degree do people think they know everything about space?"

An appreciative applause marked the close of the presentation.

"It's a lot of fun," she said. "I enjoy being able to share something I love with other people, and seeing the reaction of the audience reminds me how fascinating astronomy is and how lucky I am to be studying it."

While the topic of navigation may be a difficult one to explain, Christensen chose the topic because it's something everyone can utilize and think about. There's also a personal interest.

"I find being able to recognize the stars and know where they are to be very comforting," she said. "It means wherever I am, I have something familiar."

Phil Rosenfield, astronomy graduate student and planetarium coordinator, has been surprised by the "enormous support" the presentations have received.

He shared one of many e-mails he's received: "I'm so excited about this! I grew up about three miles from Michigan State University, and some of my favorite memories from childhood involve going to the planetarium shows there. And my mother ... I'm going to surprise her and take her; ... she's a painter and she bases most of her paintings on ideas involving astrophysics. She's going to be so psyched!"

Built in 1994, the planetarium is home to hundreds of thousands of dollars worth of technology. Special-effects machines display the sky as seen from anywhere on Earth at any time, day or year. Three digital projectors show animations, images and movies, all of which are complemented by the new sound system. Other unique displays include simulations of a shooting star and the aurora.

The planetarium began giving free presentations in November 2008. At the earliest, reservations can be made around two weeks in advance, however, the list fills up within hours. The planetarium seats 40 people.

The reason for the free presentations?

"Because we can," Rosenfield half-joked.

In addition to the presentations, the planetarium accommodates groups such as the Girl Scouts, home school networks and classes on field trips. UW students in a 100-level astronomy class are almost always guaranteed a show, said Rosenfield.

Upcoming shows include "Beyond Our Galaxy" - already full - which takes viewers to the far-reaching places of the universe, and "Wonders of the Night Sky" with a multi-cultural perspective of winter constellations and stars.