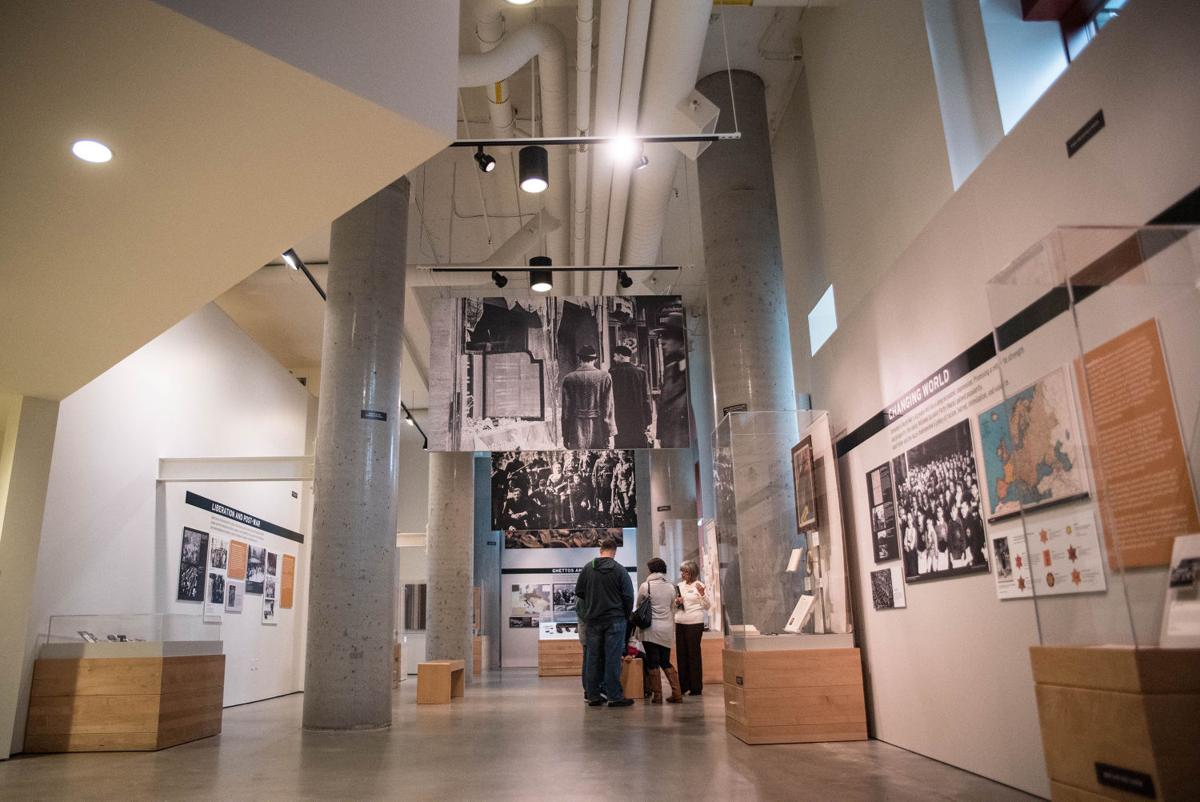 A family visiting the museum examines one of the artifacts as a volunteer tour guide explains the meaning behind the image. The space is intimate and is one of three museums in the country to house 14 original artifacts from the Auschwitz-Birkenau concentration camp. 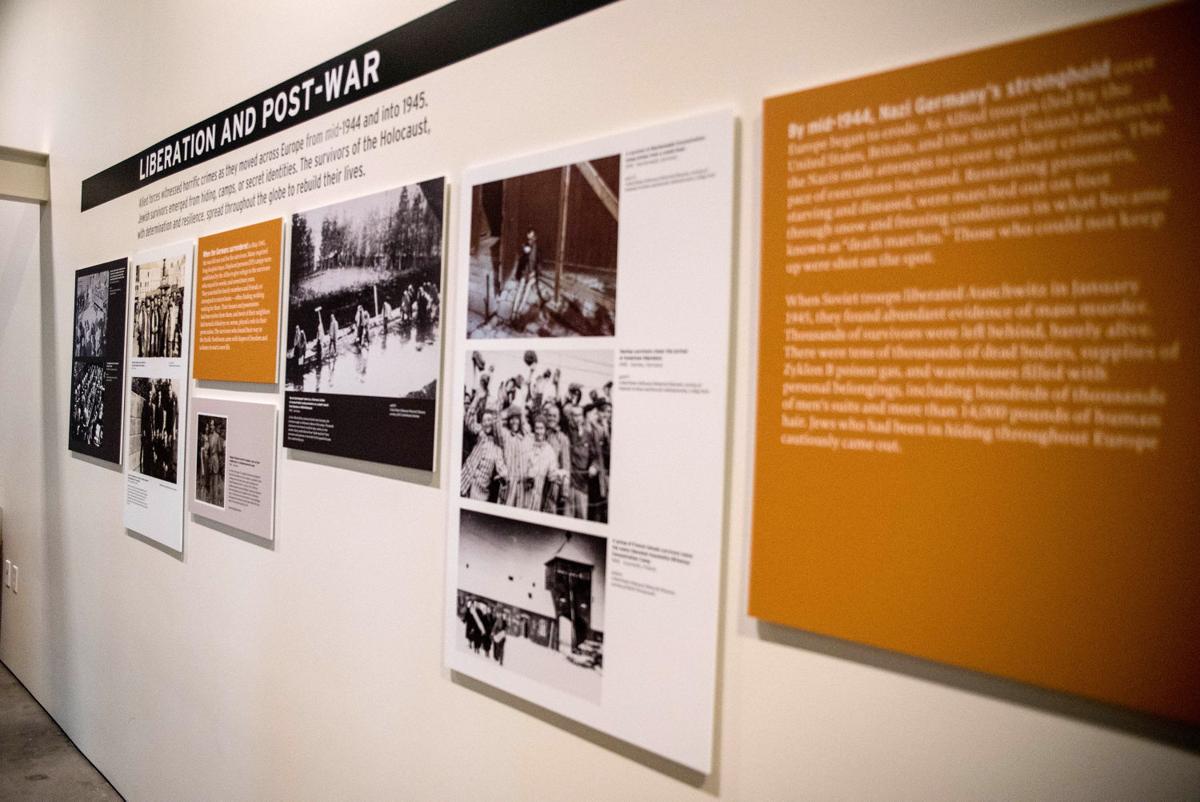 Many images that lined the walls were provided by local Holocaust survivors and their families including some in the section on the liberation of the camps and post-war life for the Jews.

A family visiting the museum examines one of the artifacts as a volunteer tour guide explains the meaning behind the image. The space is intimate and is one of three museums in the country to house 14 original artifacts from the Auschwitz-Birkenau concentration camp.

Many images that lined the walls were provided by local Holocaust survivors and their families including some in the section on the liberation of the camps and post-war life for the Jews.

A black and white picture shows a scene in Warsaw, Poland, where a throng of Jewish citizens cross a barbed wire bridge from one part of the Warsaw ghetto to the other. Below, a main road bustles with the non-Jewish citizens of the city. The two groups don’t look at each other.

Preserved letters from families that were trapped in occupied countries promise hopefulness amid suffering. An iron cross is on display; the Jewish soldier who earned it for his service in the first World War hoped it would spare him from deportation to concentration camps.

“Genocide isn’t a thing of the past,” said Jon Newman, vice president of Hillel UW’s board of directors.

Hillel is the UW’s official Jewish campus organization, and works with hundreds of students each year.

“It’s happening in different places as we speak,” he said.

Seattle’s newly opened Holocaust Center for Humanity, located near downtown, is filled with the stories of survivors and victims of Hitler’s regime. The museum itself is small, taking up only two short hallways with pictures, artifacts, and videos that cover the walls. But, the exhibits are frank and uncompromising with their descriptions of the atrocities committed during the Holocaust.

Over 15 million people were systematically killed by Nazi Germany during the Holocaust, including over two-thirds of the European Jewish population.

Newman said the Holocaust Center is important both for its physical presence in the community and its outreach work to educate people about the past.

The UW is home to about 2,000 Jewish students, with around 700 of them involved with Hillel UW, according to Hillel’s interim executive director Amee Huppin Sherer.

Hillel holds Shabbat each week, with the service and dinner open to all, regardless of faith. As part of their focus on service and social justice, a group of students will travel to Haiti this December on a humanitarian trip to help with natural disaster relief.

LB Lipney-Burger is a senior at the UW and a development intern at Hillel. For her, the events that focus on social justice and Jewish identity offer a chance to share lessons about Jewish values with other students outside of Hillel.

“I’m able to bring a lot of conversations we have here back to my family and friends,” Lipney-Burger said. “One of the most important things is a Hebrew phrase called ‘Tikkun olam,’ which means ‘fixing the world.’”

Elana Fruchtman, the social justice coordinator at Hillel, wants to focus on expanding Hillel’s network to reach more minority and interfaith groups. She said they are creating events where students can talk about various issues in a safe and comfortable space.

“There’s no favoritism at all here,” said Emma Geyer, director of Jewish student life at Hillel. “We’re trying to go against a lot of trends that exclude and silence people who speak out; that just doesn’t exist here. It’s really important to always be thinking of what we can do better to accommodate people.”

Both Fruchtman and Geyer are new to the program, but they’re committed to expanding Hillel’s programming and outreach. For instance, they are currently running a program to send interested UW students to the Holocaust Center in the coming weeks.

The center of the museum holds displays on other genocides as well, like the Rwandan and Bosnian genocides, stressing the common factors of xenophobia and discrimination that tie together large-scale human rights crises. Dee Simon, executive director of the museum, wants to educate people on what causes genocide, both past and present.

Kathie Friedman and Ruggero Taradel are both faculty at the UW’s Stroum Center for Jewish Studies. Taradel’s family was displaced from Italy when their home was bombed during World War II.

Persecuted by the Nazis, they lost everything.

Taradel said that growing up hearing stories about his family’s persecution is what led him to learn more about genocide and ethnic conflict.

While the Holocaust tends to stick out among similar genocides because of its sheer scale, Taradel argues that the elements behind it are present in almost all ethnic conflicts of its kind. He identified three common conditions that lead to the start of genocides.

“One factor is political tension and instability,” Taradel said. “The second is racial and ethnic prejudice, where racial groups are demonized as a threat to the stability of the nation. Finally, you need a political climate that favors drastic action and ultra-nationalism.”

Friedman, UW professor of International and Jewish studies, researches the ways in which immigrants and refugees find new homes and restart their lives after conflicts.

“There’s a lot of different ways people react and rebuild,” she said. “Some become more religious. You find many who turn away from patriotism and nationalism, after seeing the horrors it can bring. They find new meaning and purpose elsewhere.”

Many Jewish students at the UW come from a European Jewish background, Lipney-Burger said, and have an intimately personal connection to the Holocaust.

“For a lot of students here, the center opening up is a way for us to connect to our history and identity. It’s a really important part of who we are,” she said.

The Holocaust Center for Humanity is open Wednesdays and every other Sunday from 10 a.m. to 4 p.m. Reservations are required.

The Holocaust is one of the greatest genocides in human history. Many families still feel the consequences of this tragedy. Societies should support them and such centers are a big step towards this. You can read about it right here https://samples.edusson.com/holocaust/. Everyone should know about this historical tragedy. This should never happen again. This is a black spot on the history of mankind.