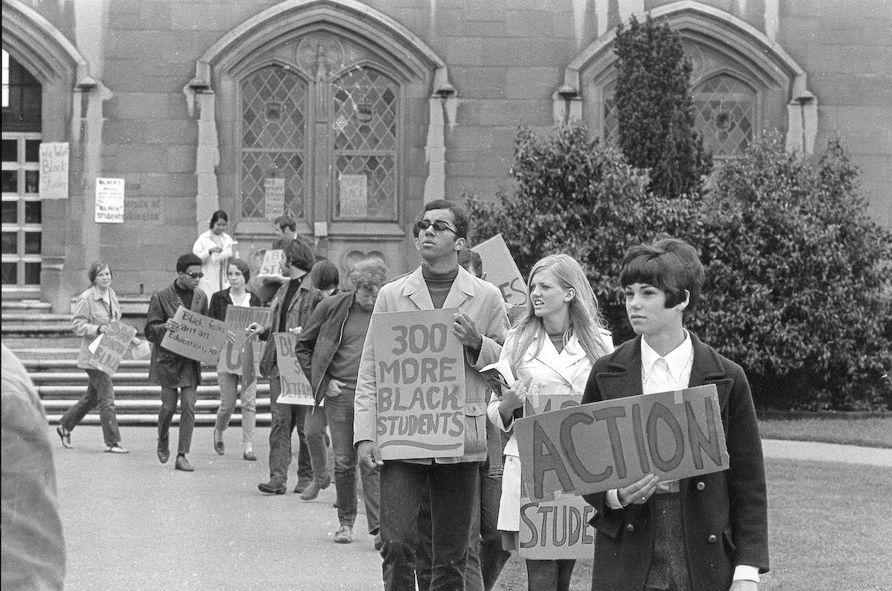 Black Student Union (BSU) members protest outside of Gerberding Hall, while other members stormed into the Faculty Senate Executive Committee meeting on May 20, 1968. 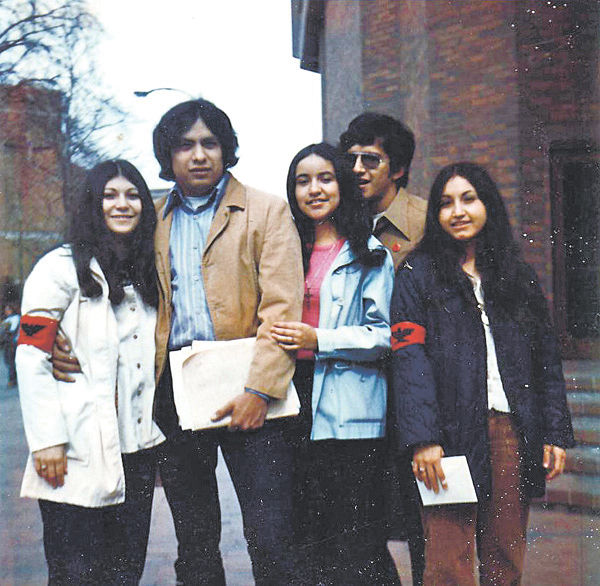 Black Student Union (BSU) members protest outside of Gerberding Hall, while other members stormed into the Faculty Senate Executive Committee meeting on May 20, 1968.

Five murals are painted on the ceiling of the Samuel E. Kelly Ethnic Cultural Center (ECC), each representing a legacy passed from one generation to the next. Six student groups, symbolized by these murals, have maintained that legacy and helped the UW become more inclusive for ethnic minorities.

These groups are classified on the Ethnic Cultural Center’s HuskyLink website as “Legacy Groups.” Each group has a rich history and has influenced the UW in ways that linger today.

Black Student Union: the beginning of a movement

On May 20, 1968, members of the Black Student Union (BSU) climbed to the third floor of Gerberding Hall and stormed into a Faculty Senate Executive Committee meeting. They demanded of UW President Charles Odegaard and Senate members more diversity in classrooms and the elimination of racism and discriminatory practices within the university.

The sit-in led to the formation of the Ethnic Cultural Center, the establishment of black studies, and changes in departmental approaches to diversity.

Many claim the sit-in reshaped education opportunities for young people of color in Washington. According to a UW-based enterprise called the Seattle Civil Rights and Labor History Project, within a year of the protest, the number of African American students at the UW increased from 150 to 465. Native American students, meanwhile, increased from 25 to 100, and Chicano students from 10 to 90. The establishment of curricula in the American Ethnic Studies department, and the formations of the Office of Minority Affairs and Diversity (OMAD) and the ASUW Diversity Commissions were also said to be inspired by BSU’s movement.

The BSU is still a force in the black community on campus today. Robert “Bobby” Alexander, a second-year graduate student and the incoming 2013-2014 BSU president, said the organization aims to examine and spread issues that are relevant to the black community, including but not limited to the African, Caribbean, and African American communities.

For Alexander, being a part of an organization commonly termed a “Legacy

Group” also means a greater responsibility toward the group’s constituents. Alexander sees BSU as the “grandfather” of many of the organizations that now exist in the black community.

“I would say a legacy group is a group of students that came together more than 25 years ago and share a belief system, came together to put pressure on the university so that change can happen for the communities,” he said. “It’s crucial because most student organizations are led by legacy groups.”

After BSU’s sit-in ignited efforts to recruit more minority students, the population of Chicano students at the UW increased, according to fifth-year senior Jessica Gonzalez, historian and educational co-chair of Movimiento Estudiantil Chican@ de Aztlan, or the Chican@ Student Movement of Aztlan (MECha). She added that BSU members also went to the Central Valley and Eastern Washington to recruit more Chicano students themselves.

“Getting Chicanos to UW would not have happened without the advocacy work of BSU,” Gonzalez said. “Later, enough Chicano students came to the UW, where we started MEChA.”

In 1968, the Chicano-focused organization at the UW was called United Mexican American Students (UMAS), which established a Mexican-American studies class through the College of Arts and Sciences. UMAS officially changed their name to MEChA in 1969, adopting the term “Chicano” instead of “Mexican-American” as the generation changed.

In 1991, the ASUW La Raza Commission was formed from MEChA, using the term “La Raza” to include not only the Chicano community, but all the Latino groups. As the number of Latino/Chicano students has continued to grow, a variety of groups that focus on specific Latino issues, culture, or identity have been established, Gonzalez said. MEChA, as a legacy group, serves as the umbrella body that addresses other issues affecting Latino/Chicano community, including women’s issues, queer issues, undocumented rights, and immigration reform.

Gonzalez said being part of a legacy group means having an intimate understanding of the past struggles and the present efforts of a community, as well as working for its future potential. An essential part of contributing to that legacy is not only being open to change, but recognizing when to incorporate it.

First Nations: the visible one percent

To Corinna Tordillos, UW senior and an officer for First Nations at UW, the term “Legacy Groups” was the designation used for the student groups that split off from the BSU after OMAD was established. Some Native Americans were also involved during the BSU protest.

“BSU was basically the ‘colored’ organization [at the time], a lot of different people were in it,” Tordillos said.

According to Tordillos, First Nations was established in the early 1990s. The group stemmed from the Native American Student Council (NASC). In 1991, NASC moved the Spring Powwow to Sand Point Naval Base, in protest of the high cost of hosting a Powwow at the UW. In 1994, a group of students created First Nations to bring the Powwow back to campus.

“It’s a great way to bring in local people, since we have one of the largest Powwows in the Pacific Northwest,” Tordillos said.

Despite the scale of its events, the Native community is a minority on campus. According to 2012 UW admissions statistics, Native Americans only make up one percent of the student body. First Nations, Tordillos said, can, as a legacy group, be a safe space for Native communities as well as an opportunity to educate both Natives and non-Natives.

“Awareness of why we should care about other communities — Latino communities, black communities — it goes along with diversity and what we bring to campus,” Tordillos said. “[First Nations] is a safe space … but it’s also a great way to network and connect and be in an environment where there’s alike people.”

Filipino American Student Association: the meaning of a name

Enrico Abadesco, recent UW graduate and FASA’s 2012-2013 political chair, said the change from FSA to FASA changed the group’s meaning for different generations. At the time, many students at the university with Filipino heritage were born in the U.S., and may experience “identity crises.”

“I think the conflict was the idea of, ‘No we’re Filipino Club,’ but also the students who were there are like, ‘No I was born here, it’s Filipino American, it’s different,’” Abadesco said. “And that’s still a struggle that a lot of us go through today.”

Over the years, FASA participated in advocating for not only Asian and Asian American rights in the city and state, but also more Asian American — and specifically Filipino — faculty, staff, and curricula at the university.

To Abadesco, legacy groups like FASA are important to the community so the groups’ heritage and past struggles are remembered.

“If you don’t define legacy groups and honor that history, then in the midst of all this other history, the university’s whole history, it’ll be lost,” Abadesco said. “To honor that [history] pays respect to the people that sacrificed so much for [us] to be sitting here having these conversations.”

Bello said legacy groups also serve as “an inspiration” to student groups that are just starting up and looking for direction, exemplifying the potential impact of student activism.

“[A legacy group] stands to the strength of students as movers and changers of the community,” Bello said. “It is with these legacy groups that a lot of these changes happen on the university campus. If those [people] can do it then, all the more empowers me to say ‘I can do this too.’”

Within the multi-racial Asian American movement of the 1960s and 1970s, Pacific Islander students also played a part, according to the Seattle Civil Rights and Labor History Project. At the UW, however, Pacific Islander-focused movements started later than other legacy groups, because they were initially grouped under the umbrella term Asians.

Micronesian Islands Club (MIC), which became an official Registered Student Organization (RSO) in 1996, was modeled after Seattle University’s Marianas Taotao Tano Club, which represents the Chamorro community, according to incoming MIC president Brianne Ramos. As the number of Micronesian students at UW grew, MIC started to represent people from the whole Micronesian Islands region, including Micronesians who were born and raised in the United States.

Since its establishment, MIC has made efforts to separate itself from the Asian or Asian American umbrella terms.

In March 2000, the ASUW Pacific Islander Student Commission (PISC) was formed in order to better represent communities from Guam, Fiji, New Zealand, Samoa, and the Philippines. PISC now oversees the MIC, FASA, Hui Hoaloha ‘Ulana (the Hawaii club on campus), and the Polynesian Student Alliance (PSA). Several sources state that PISC itself is a legacy group, while other sources, including the ECC HuskyLink website, claim that MIC and PSA are two separate legacy groups under the PISC.

Twelve years after the commission formed, the Pacific Islander community, including MIC, held a peaceful march at an OMAD Student Advisory Board (SAB) meeting to protest the plans to combine the Asian and Pacific Islander rooms in the new ECC.

“[The march] was just really empowering, because we put a lot of planning into that day and we all came together for something that we wanted and we were able to achieve it,” Ramos said.

Because the community is small, she added, getting their voices out has been a challenge. Even now, Pacific Islanders make up less than one percent of the student population. Another challenge Ramos sees is distinguishing MIC from PSA, the student group on campus that represents a larger community of Polynesians.

“We are so closely affiliated. We’re sister organizations since we were created around the same time,” Ramos said.

Ramos said one part of being in a legacy group is getting to know the generations that started the Pacific Islander movement at the UW. She said it was “inspiring” to meet and talk with MIC and PISC alumni.

“Their stories definitely inspire me to remember that for MIC, as much fun as it can be to hang out with other members, it’s not just a social group,” Ramos said. “There’s always change to be made.”