It was January 2004 and Dr. Bart Kahr noticed a problem.

Kahr was examining work by a fellow chemist, Dr. Larry Dalton, UW emeritus professor of chemistry, and noticed that a breakthrough Dalton had told the Seattle Post-Intelligencer in 2000 would “dominate the 21st century,” and for which he raised more than $100 million in grants, contracts, and venture capital to make a reality, was, in fact, doing the opposite. There was nothing.

Dalton said he had synthesized a material that could be used as a switch for light, which could increase internet speeds. The key advance he reportedly made was in the ability to align dye molecules in thin polymer films. Large sums of the $100 million were spent on making dye molecules into shapes especially prone to alignment, allowing for faster optical signals that could carry more information.

But when Kahr held up the film in front of polarized light from a computer monitor, there was no detectable change in color depth, indicating that few molecules were oriented.

This absence of alignment placed strong limits on Dalton’s research and in 2004, his team hadn’t made measurements of linear dichroism, the change in the absorption of light necessary for the ordering of dyes that was believed to be needed. 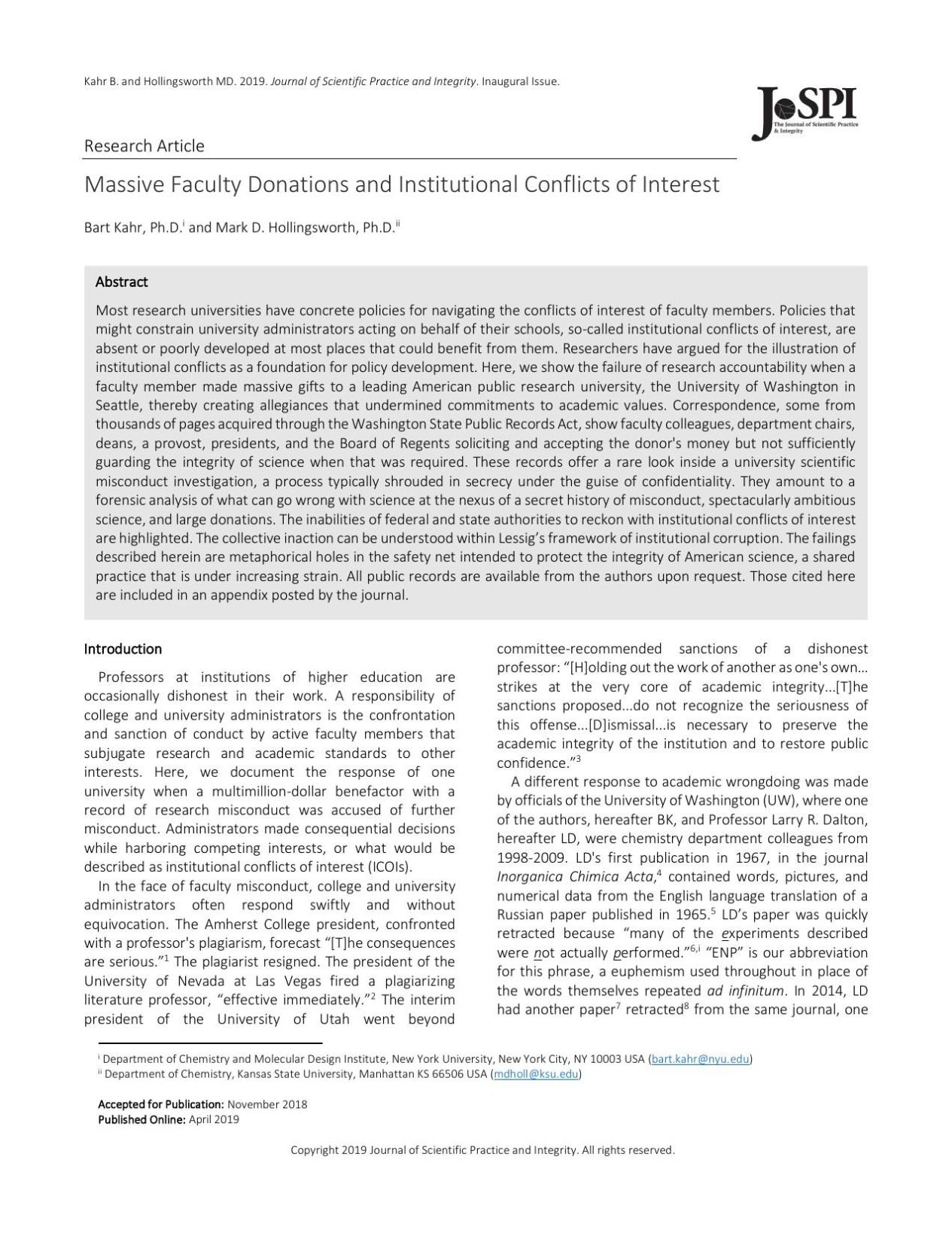 After getting nowhere with his requests for the leading investigators of the Science and Technology Center (STC) (funded by the National Science Foundation (NSF), which Dalton led during its first five years, to look into this urgent problem, Kahr went to Dr. Alvin Kwiram, the former UW vice provost for research and then-executive director of the STC.

Kahr, who himself received a $40,000 subcontract from the center to advise on Dalton’s research, told Kwiram that the science was “wrong” and no one seemed to care, according to a paper written by Kahr and Kansas State University chemistry professor Dr. Mark Hollingsworth that was in the peer-reviewed Journal of Scientific Practice and Integrity (JOSPI) in April 2019.

This article is based on the findings of this paper, constructed with thousands of pages of documents obtained under the Washington State Public Records Act which include internal emails, and interviews with people involved. Attached is a detailed timeline of the events described herein. 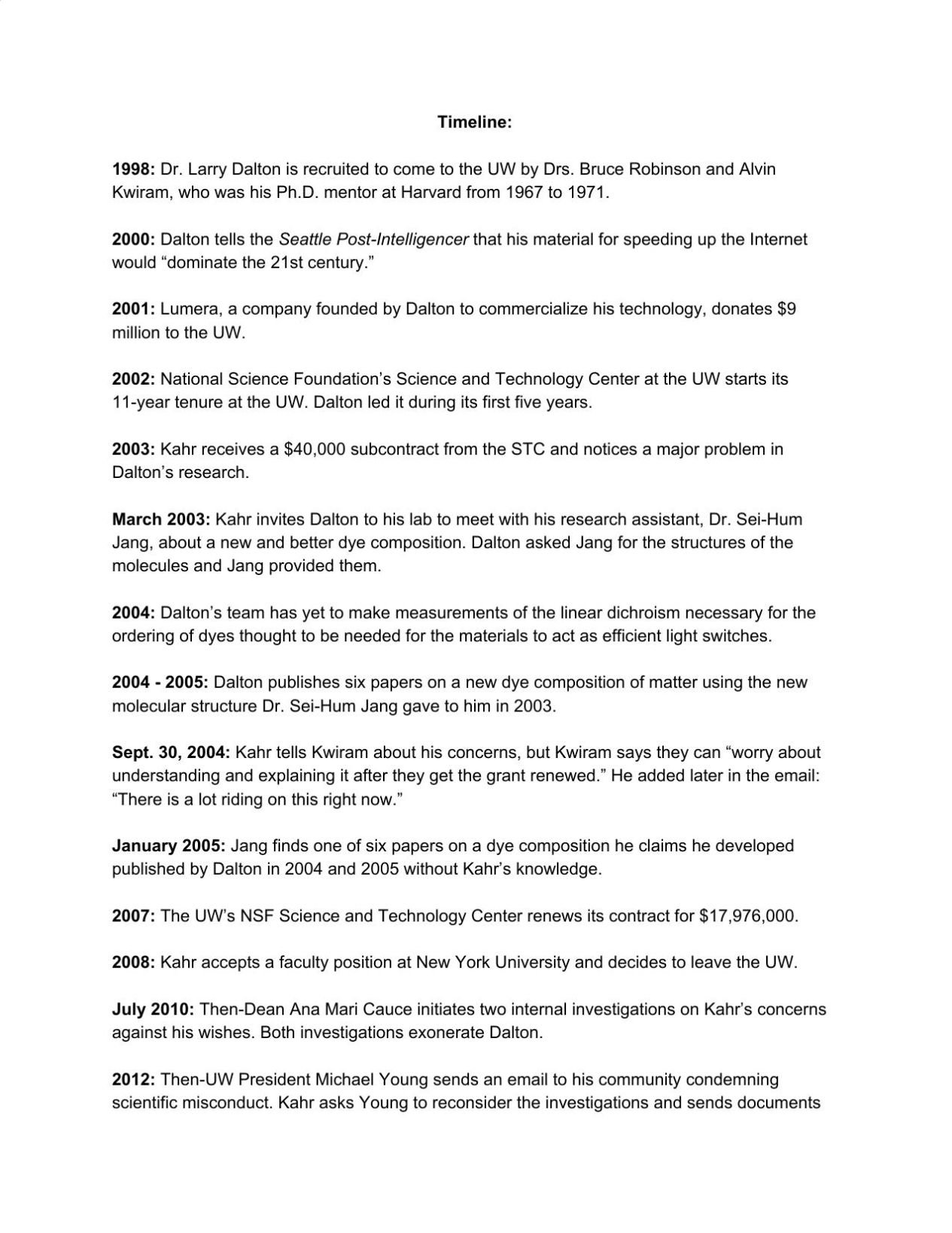 Once Dalton’s team got the main research devices working, they could “worry about understanding and explaining it after they get the grant renewed,” Kwiram wrote in an email to Kahr in late September, 2004. “There is a lot riding on this right now.”

Kwiram wrote in a separate email: “I know some of the team is a bit impatient with the issues you raise and we probably need to moderate our importuning somewhat.”

Nevertheless, earlier in the same email, Kwiram wrote, “I encourage you to keep probing.” Kwiram declined to comment for this article. This part of the email was not included in the JOSPI paper, but provided in full in the accompanying appendix.

Kahr wrote a report for the NSF outlining his case, but he says his account was not given to the foundation.

In 2004 and 2005, Dalton published six papers on a new dye composition after the structure of the molecules –– considered better for light switches than the ones previously researched –– were provided to him by Dr. Sei-Hum Jang, a former research assistant for Kahr. Jang, along with Kahr and UW material science professor Dr. Alex Jen, were awarded a U.S. patent for this molecule structure.

Dalton’s papers were published without Kahr’s knowledge and, in some cases, without Jang’s knowledge either. When Jang stumbled upon one of Dalton’s articles in January 2005, he saw that he was named as a co-author despite not knowing it was even published.

Four of the papers published in the International Society for Optics and Photonics (SPIE) journals were considered for retraction years later, but the director of SPIE chose not to, siding with Dalton, who claimed he was not well informed of Kahr’s role in the development of the material. Jang declined to comment for this article.

Kahr first invited Dalton to his lab in March 2003 to show him what Jang was working on.

In 2007, the STC renewed its contract with the NSF for nearly $18 million. Kahr decided to leave the UW the following year, accepting a new position at New York University “since it had become increasingly difficult to witness such pervasive indifference to demonstrable scientific facts,” as stated in the JOSPI report.

The JOSPI paper’s sweeping saga of scientific misconduct was eventually investigated by administrators within the UW, a school receiving millions of dollars from the man they were trying to investigate. Multiple investigations found no fault in him, posing a clear conflict of interest to the writers that, in their opinion, pushed the school to prioritize money over scientific integrity.

“When you put fundraising ahead of the mission of the institution, then you are effectively destroying the virtues of the thing you are trying to support,” Kahr, now at NYU, said in an interview with The Daily.

Dalton, a Harvard-educated chemist, and his wife Nicole Boand gave millions of dollars to the UW, including a $12 million donation to the department of chemistry in 2017 earmarked for postdoctoral support on top of more than $10 million already given. Many at the university benefited from this and other donations. Kwiram himself had endowments named in his honor. Six faculty members received chairs or professorships from that money.

“Who could ever find that sort of person guilty of anything?” Hollingsworth, the co-author of the JOSPI report, said in an interview.

Dalton and Robinson declined to comment for this article.

In June 2010, Kahr wrote to then-Dean of the College of Arts and Sciences Ana Mari Cauce, describing that all of the money from Dalton’s donations and the estate that he promised to leave to the chemistry department, an already “cash-poor environment,” was “a license to commit any excess.”

The year before, Cauce insisted that Kahr file a complaint to initiate an internal investigation, but he refused, saying that he didn’t trust the university to be impartial. She opened two in-house investigations anyway, which exonerated Dalton of any abuses of standards. Cauce wrote in her investigation that the exclusion of Kahr’s progress report from the STC’s own report to the NSF in 2004 “was within professional norms,” because it included “preliminary findings” from only the second year of Dalton’s five-year research grant.

Kahr sent him copies of what he had found, but before the documents arrived, Young’s chief of staff drafted an email that read, “This office has reviewed the correspondence on this matter and conferred with those who conducted the earlier examinations of your allegations.” Young wrote in an email that it was a “perfect response,” but told the chief to wait until Kahr sent his materials.

Minutes later, Young emailed Cauce, writing “I’m not actually intending to redo all this … Just thought it is a courtesy to delay our reply until he’s had time to send his materials.”

Cauce, who has been UW president since 2015, responded “Your instincts are perfect! Don’t want to give him a reason to think you didn’t take it seriously.”

Dr. Mike Heinekey, current chair of the UW chemistry department, declined to comment, instead forwarding an email from Robert Stacey, dean of the College of Arts and Sciences.

“These claims were thoroughly investigated by various bodies, including the Inspector General of the National Science Foundation, the UW Office of Scholarly Integrity, and the College of Arts and Sciences,” Stacey wrote in a March 2015 email. “All of these groups found the claims made by Dr. Kahr to be without merit.”

UW spokesman Victor Balta declined to comment on the specifics of these emails.

“The allegations have been found to be groundless by the NSF and the UW’s investigation. We have nothing more to add,” Balta said in an email.

Both of the internal investigations, led by Cauce and the Office of Scholarly Integrity, took the position that Kahr and Dalton had only an honest difference in scientific opinion.

Dalton and others eventually wrote a paper in 2009, after the STC renewed its contract with the NSF, that said that what the team had been looking for years earlier wasn’t necessary; the dye didn’t need to be “strongly oriented” after all. It closes with a surprising shoutout.

“The authors thank Professor Bart Kahr for many helpful discussions.”