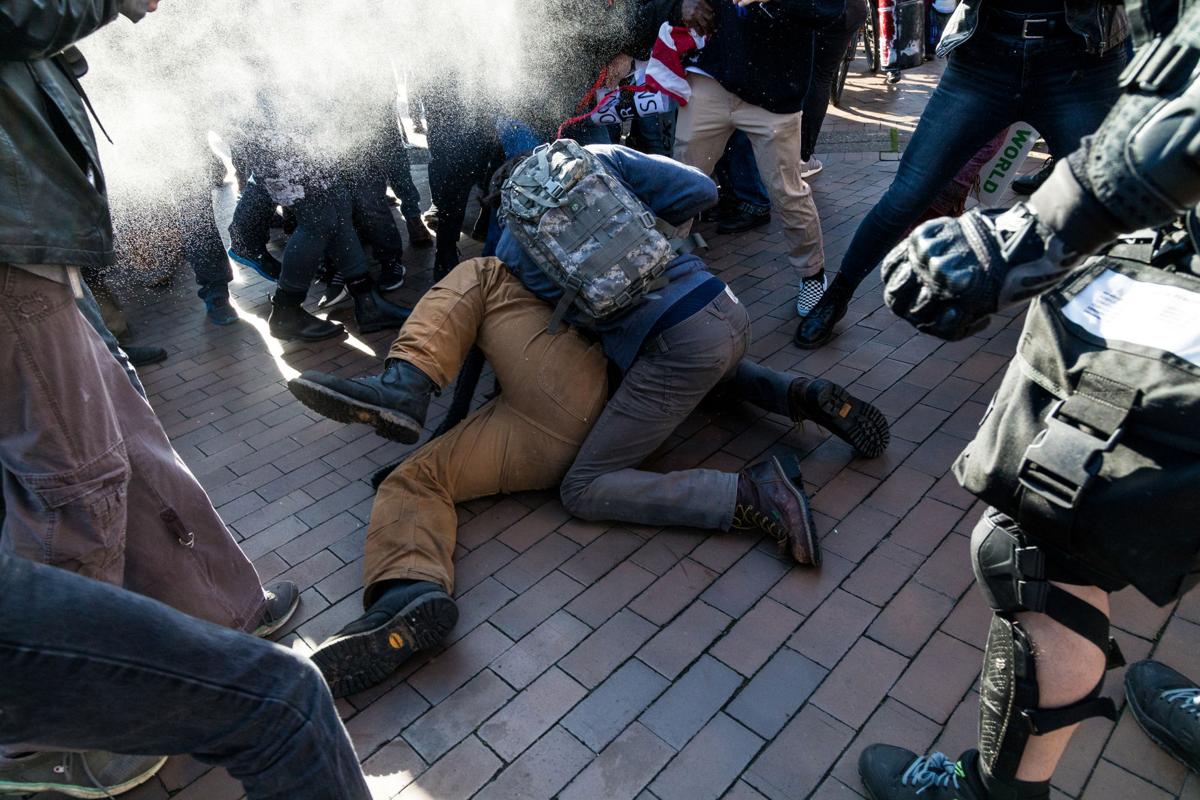 Several fights broke out between Patriot Prayer supporters and counter-protestors, with the UW and Seattle Police dispatching pepper spray to contain unrest during a February 2018 rally. 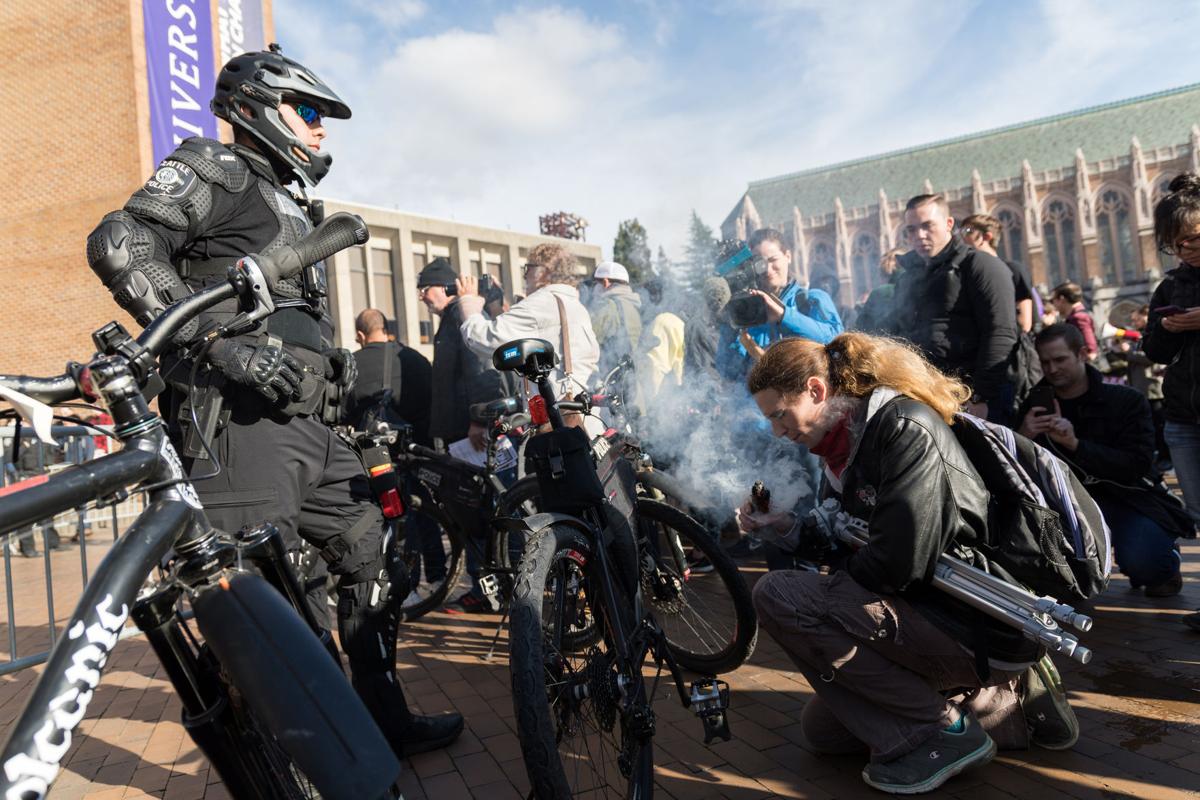 A few members of the counterprotest crowd burn sage and bring recognition to Native American rights and to respect the Duwamish land that the UW is built upon. 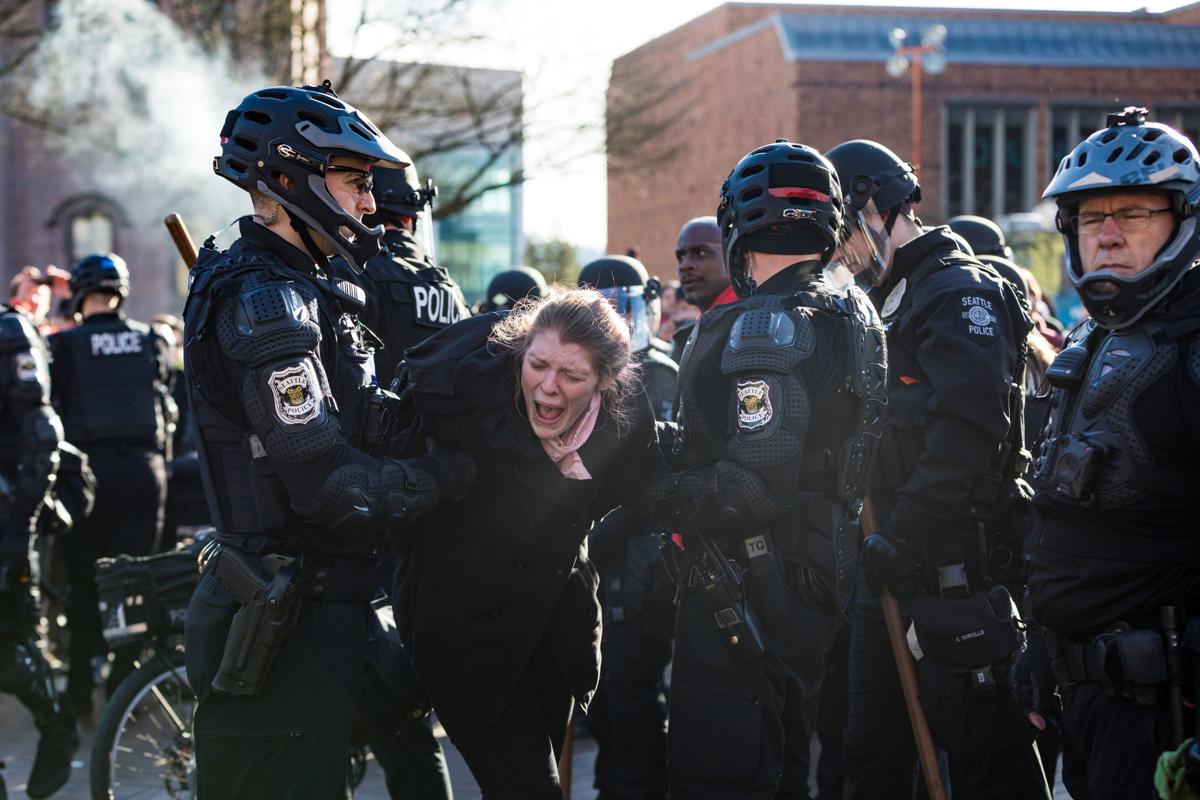 A woman cries as she is arrested by Seattle police officers. 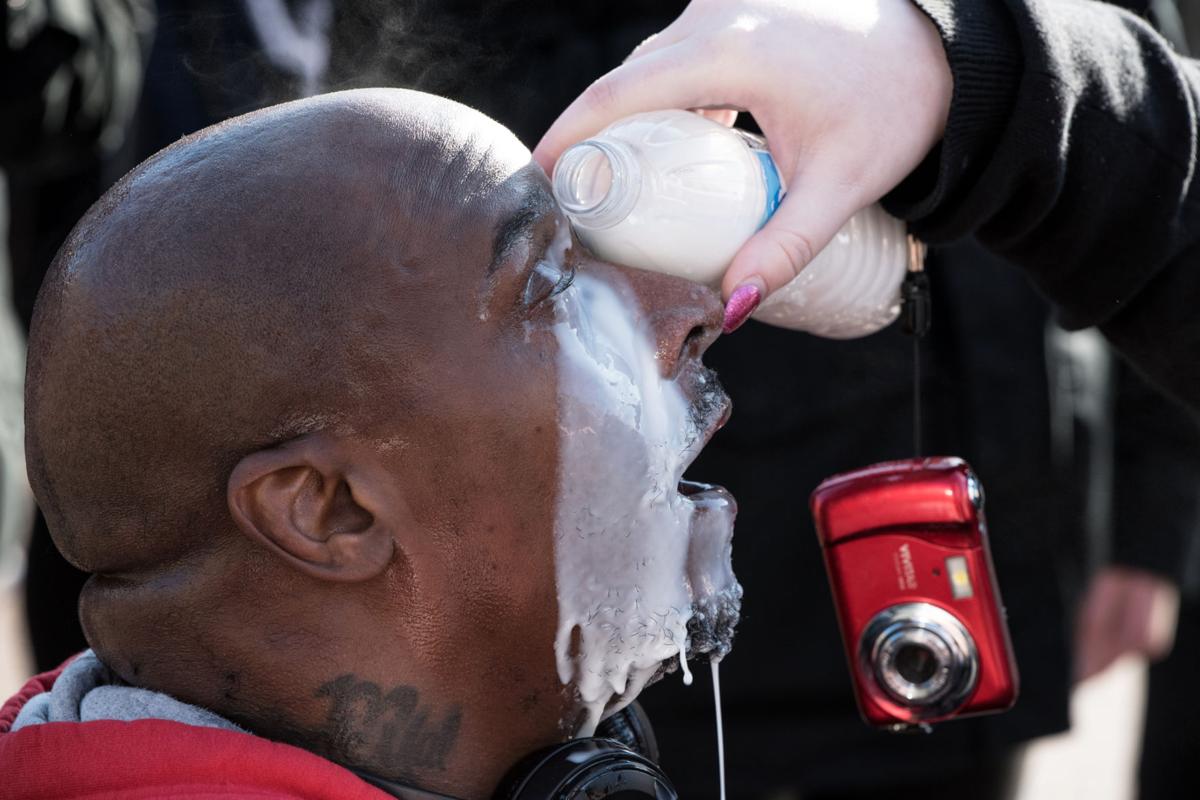 Jamal, a counterprotester at the Patriot Prayer rally, gets milk poured in his eyes after being pepper sprayed. 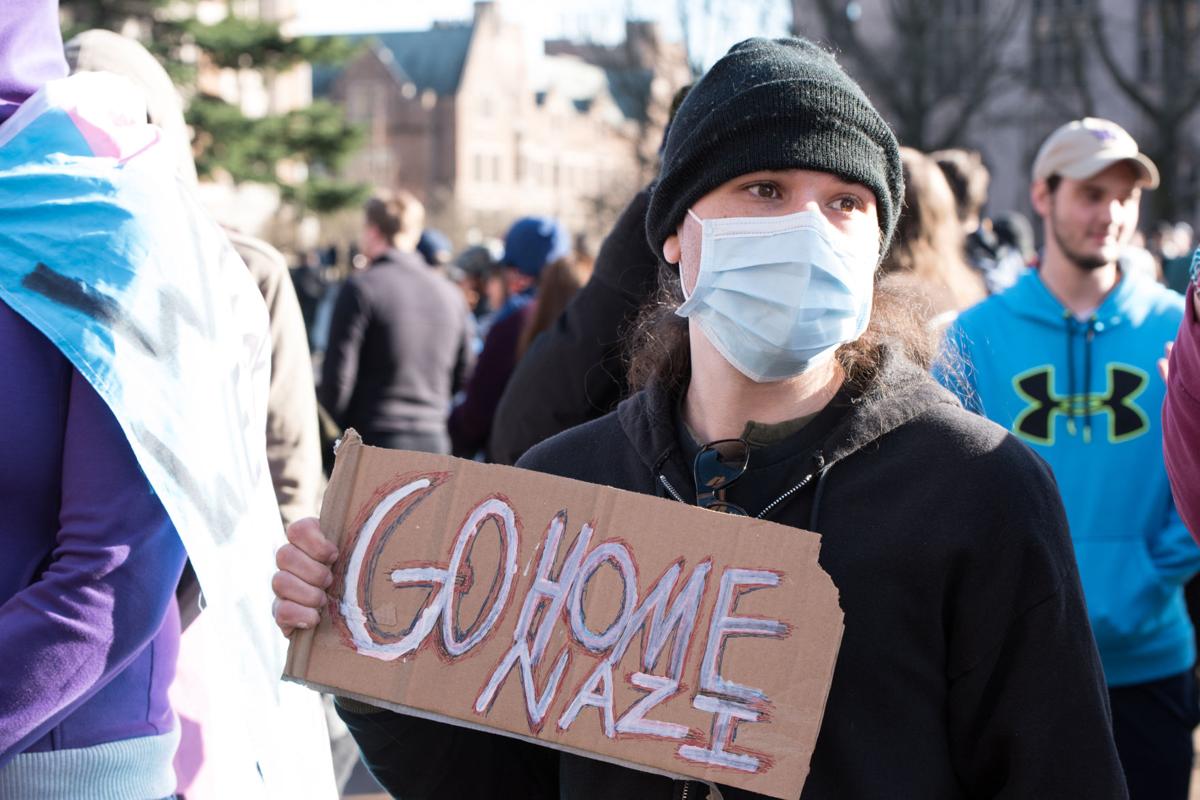 Counterprotesters hold up signs in opposition of the Patriot Prayer rally. 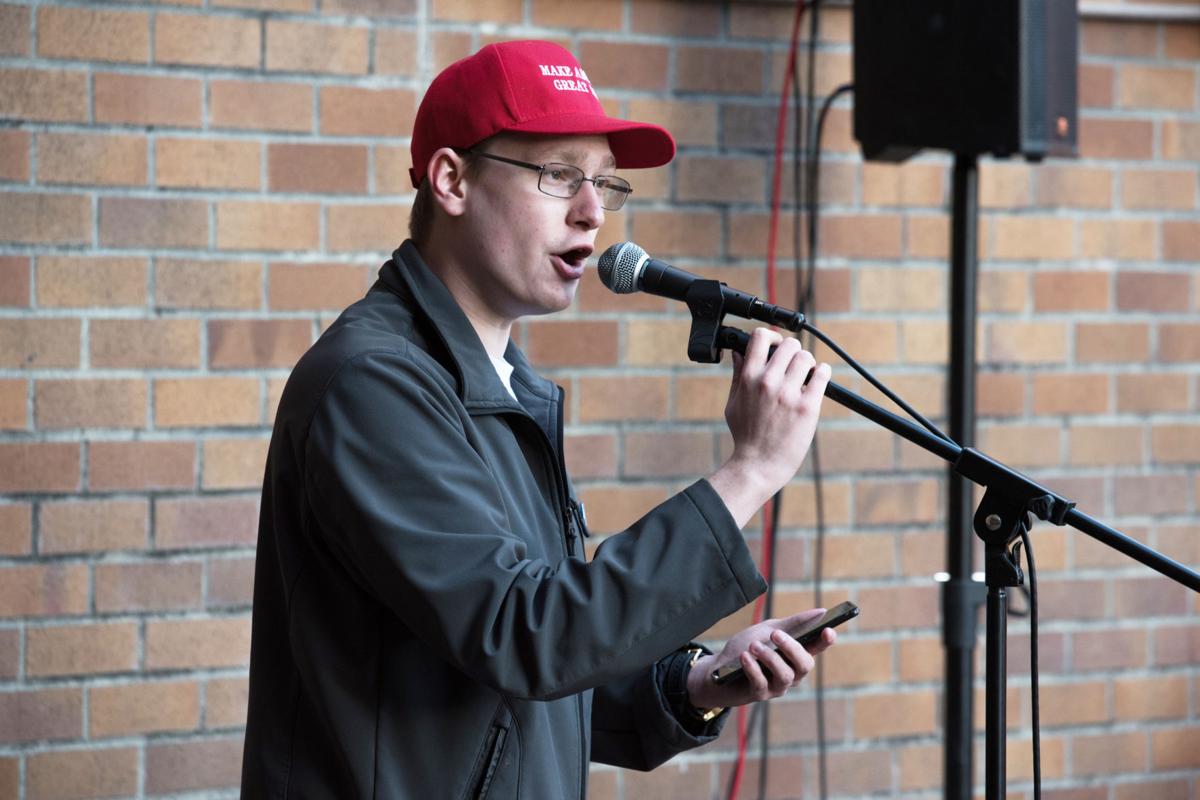 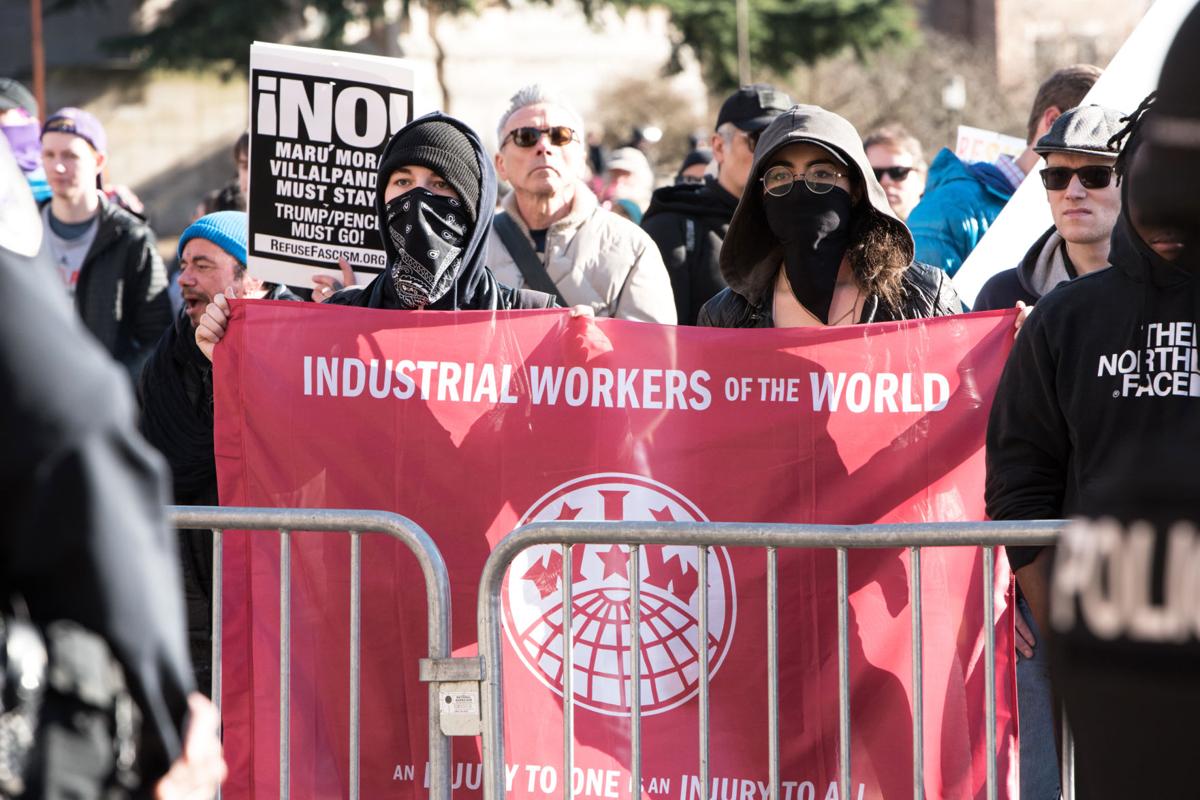 Antifa was present at the counter protest against Patriot Prayer on Saturday in Red Square. 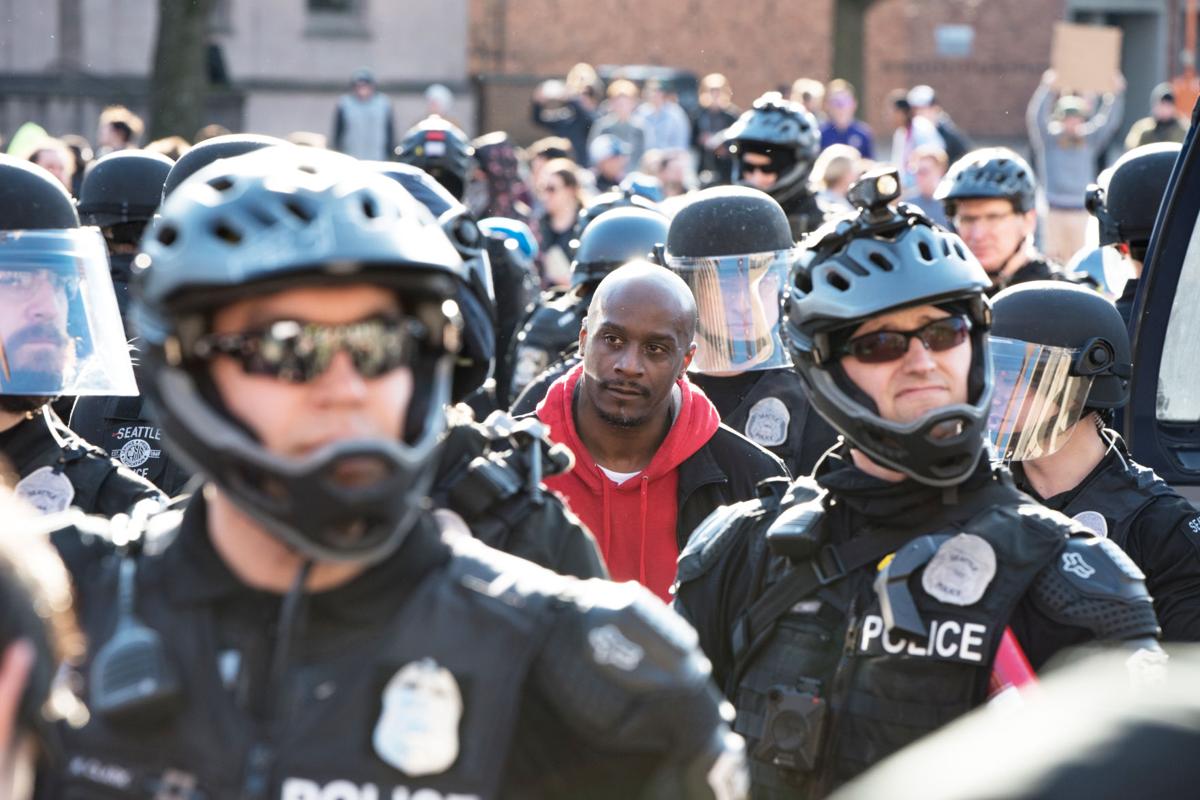 Jamal, a counterprotester at the Patriot Prayer rally, is arrested after being peppered sprayed during an altercation. 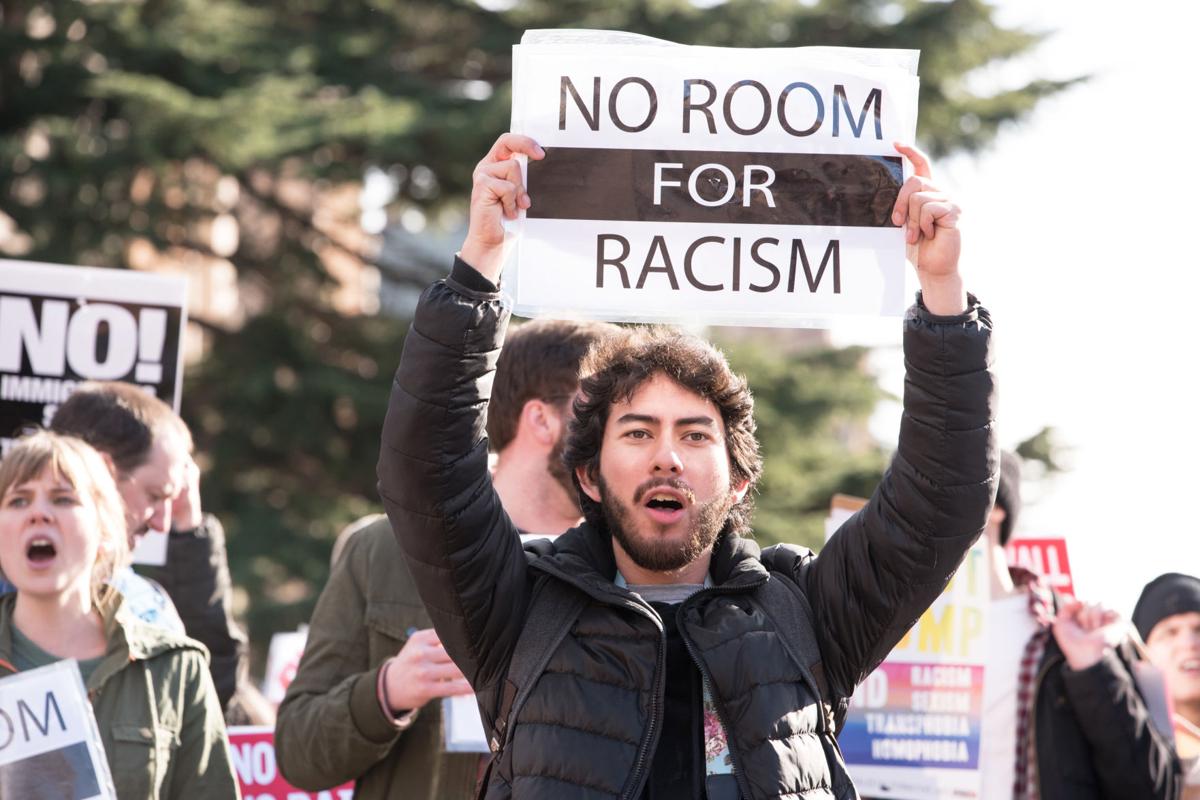 Counterprotesters hold up signs to show their opposition against the Patriot Prayer rally attendees. 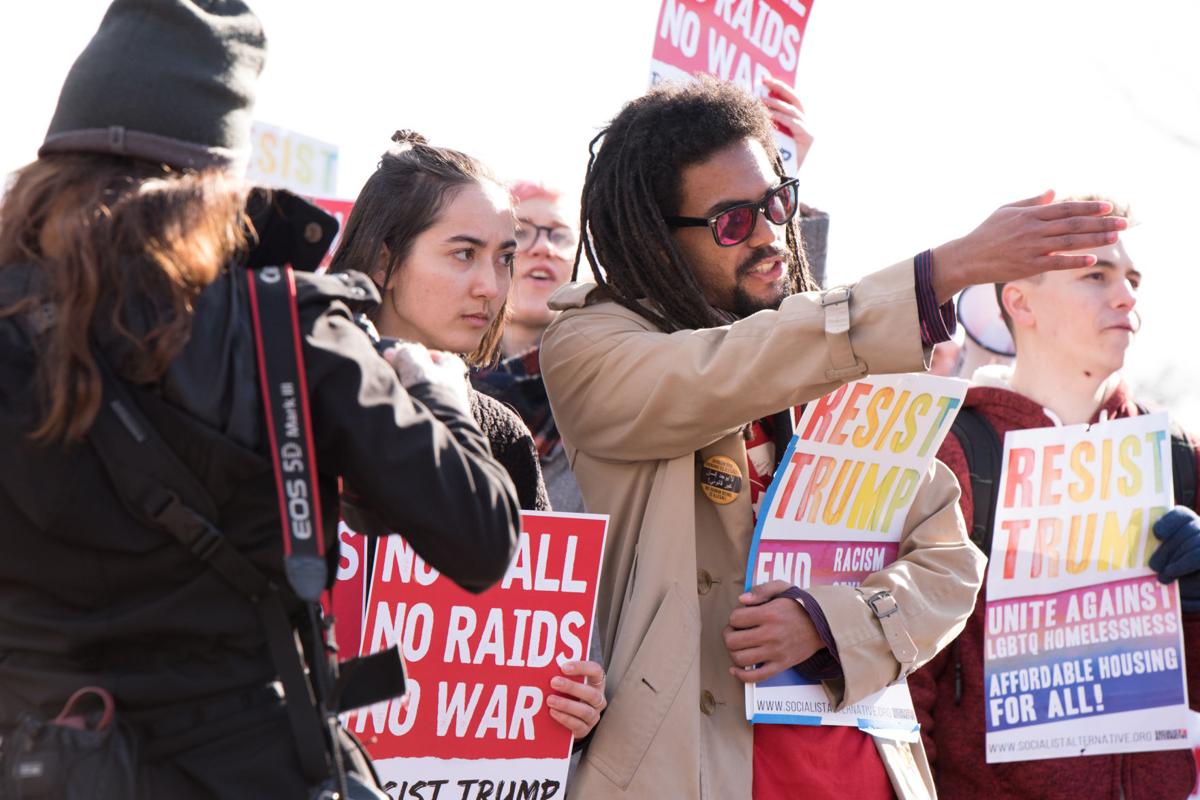 Counterprotest leaders talk about where to lead their people. 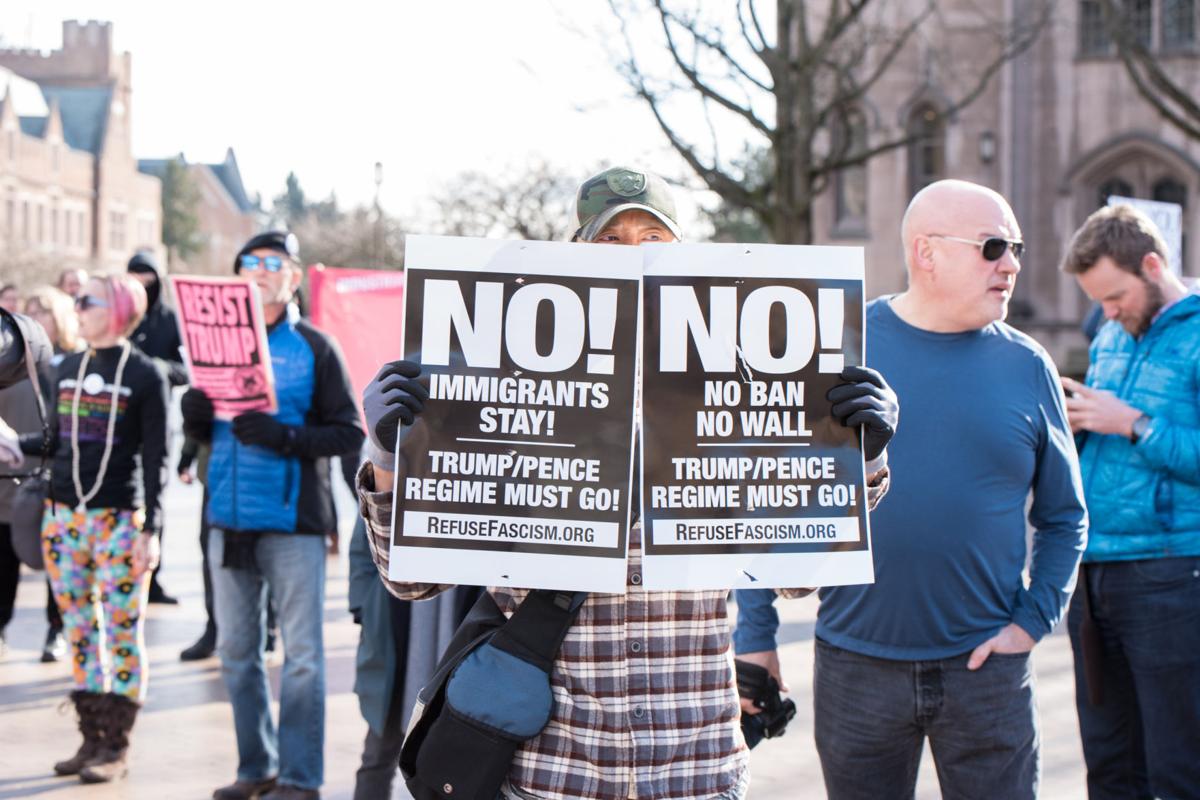 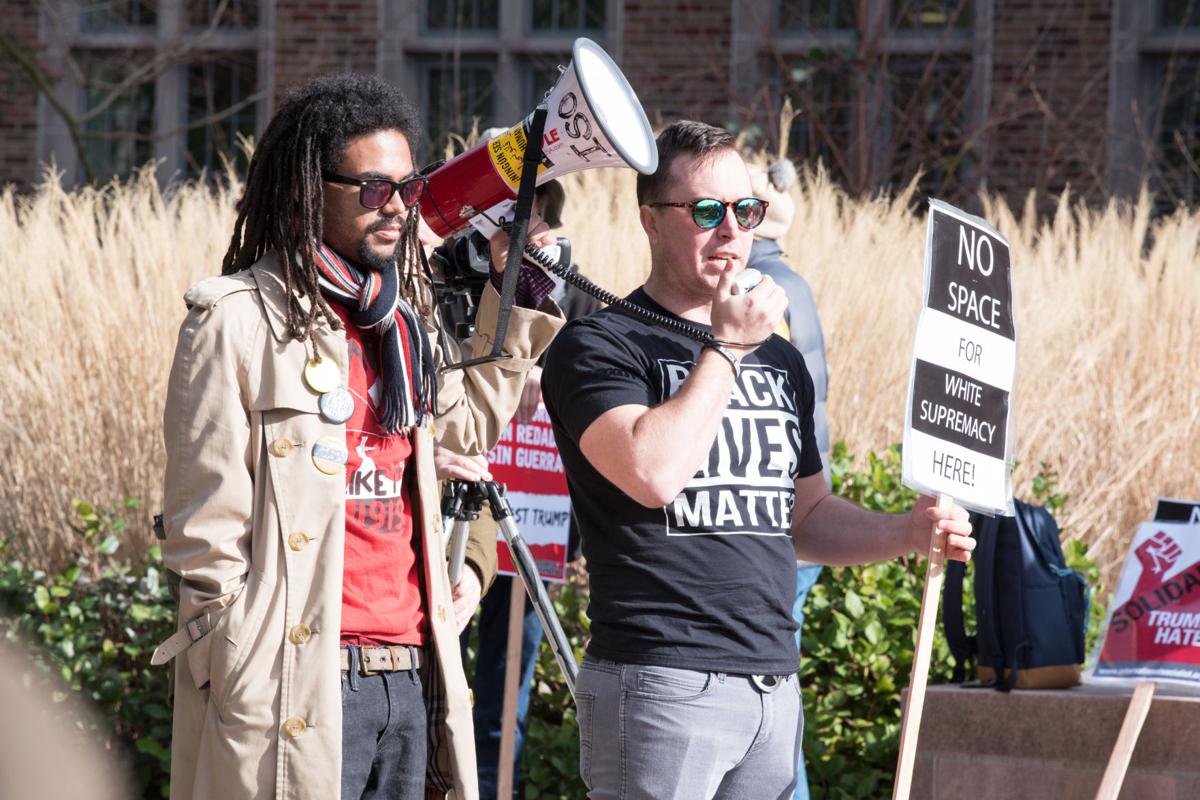 Counterprotesters assemble in front of the HUB to give speeches before heading to Red Square. 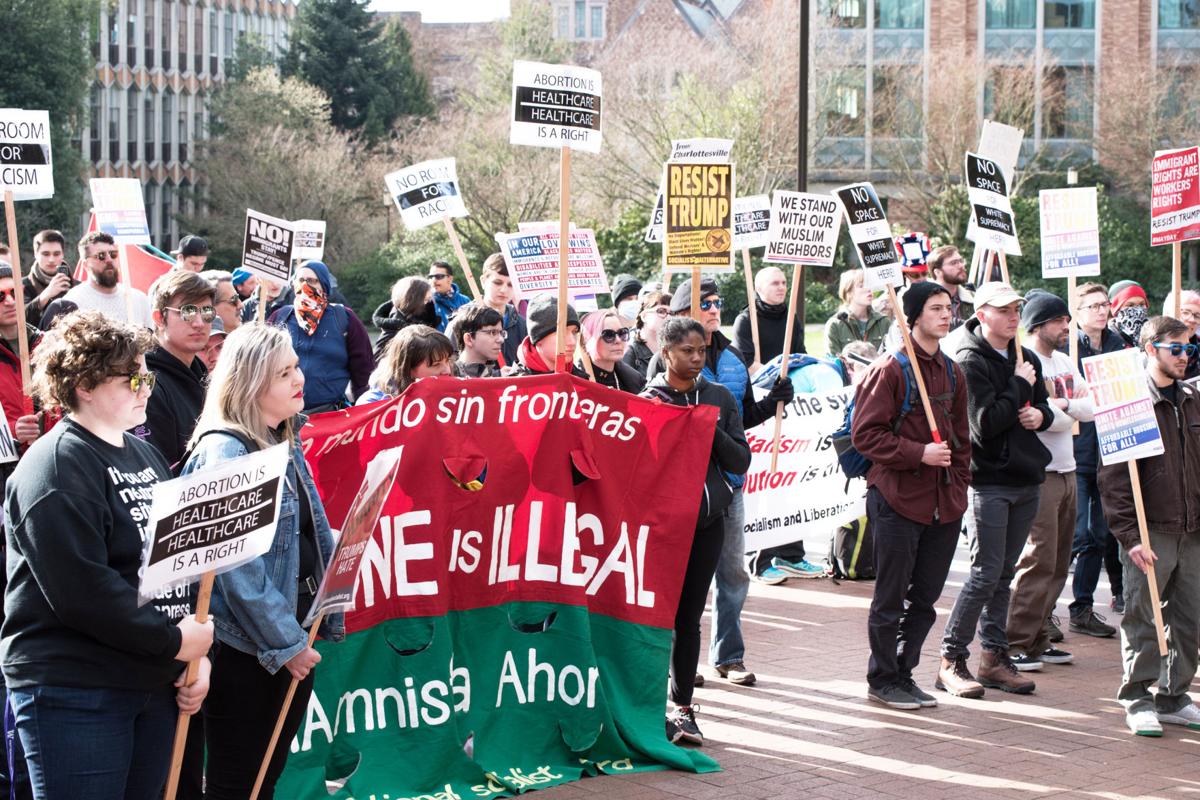 A large group of counterprotesters assemble outside the HUB on Saturday. 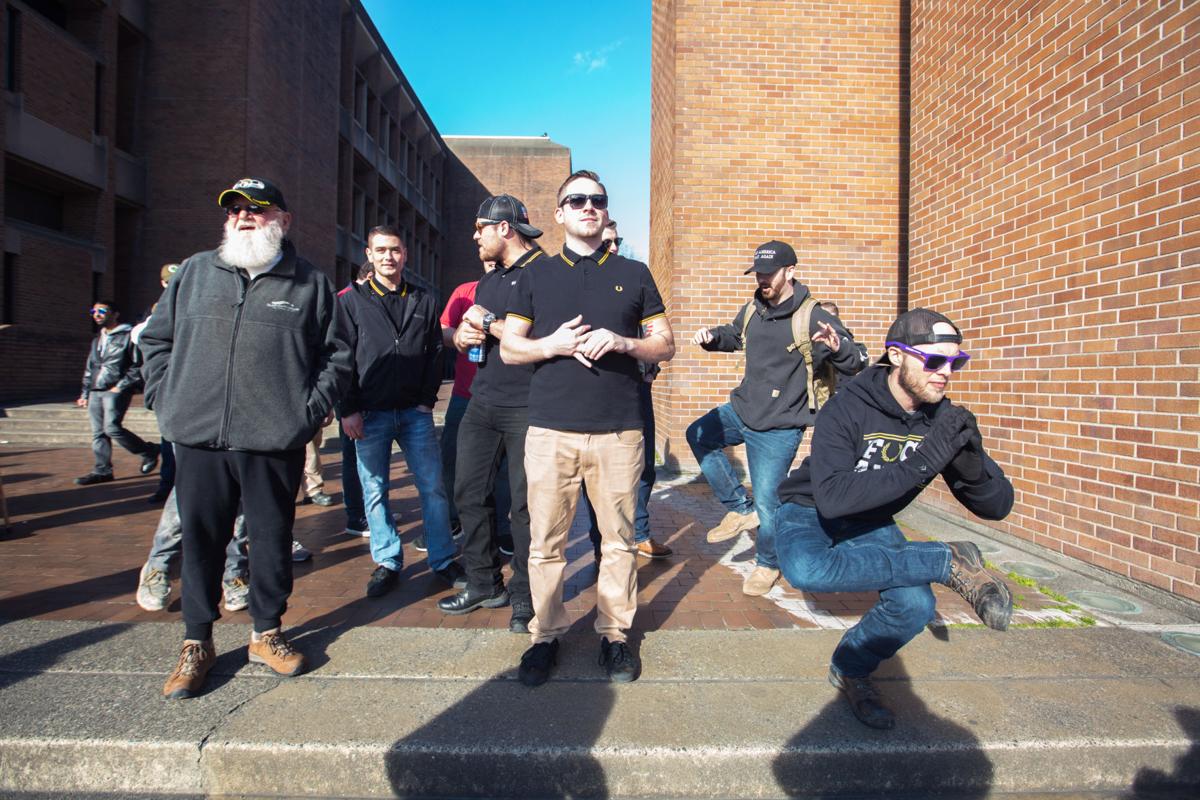 Patriot Prayer members and Proud Boys look at the crowd of counterprotesters while doing fake yoga poses and saying “Let’s try to speak their language.” 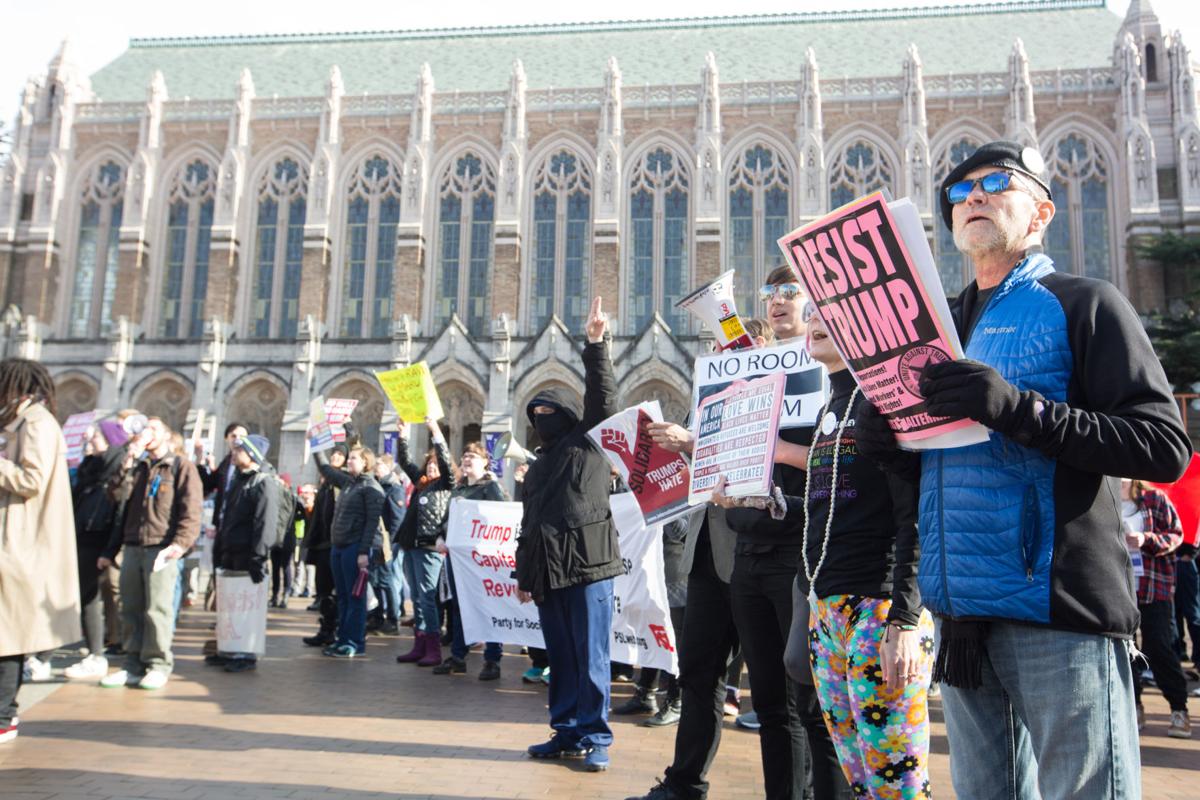 Counterprotesters take a stand in Red Square, where Seattle and UW police officers separate them from Patriot Prayer attendees. 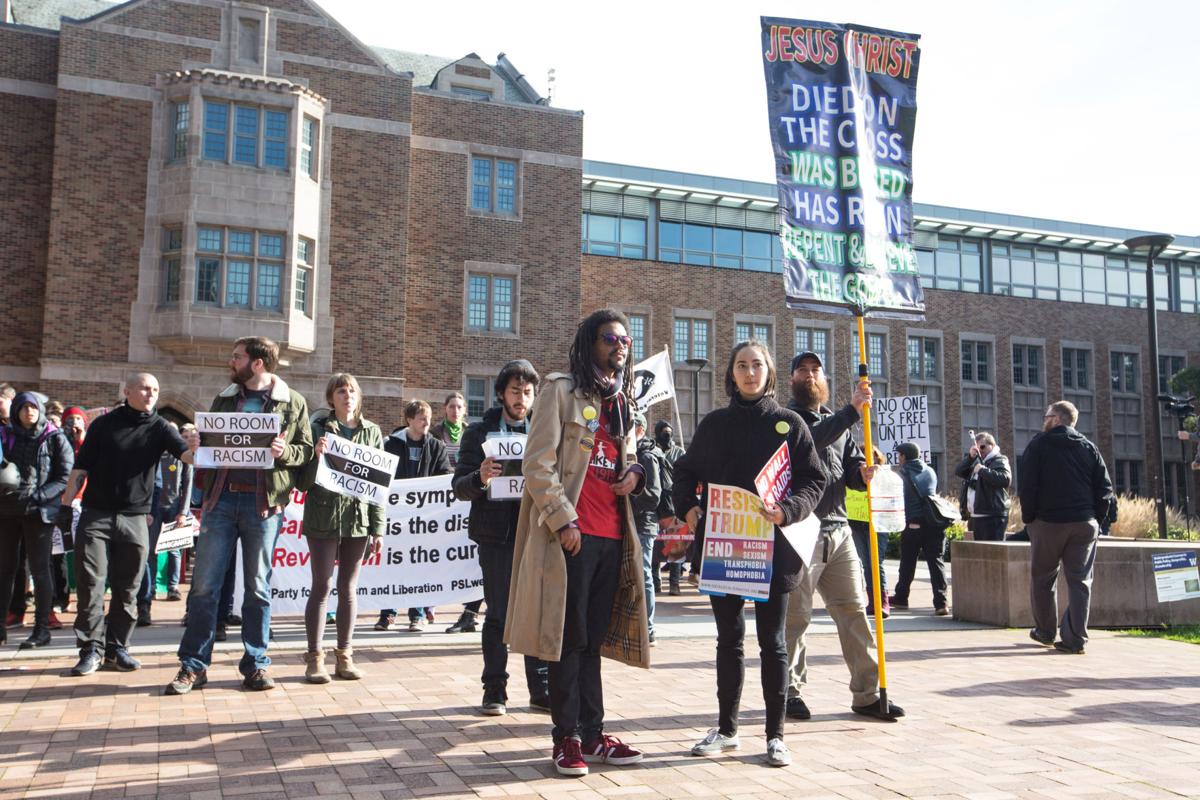 Counterprotesters converge before walking to Red Square for the protest against Patriot Prayer and UW College Republicans. 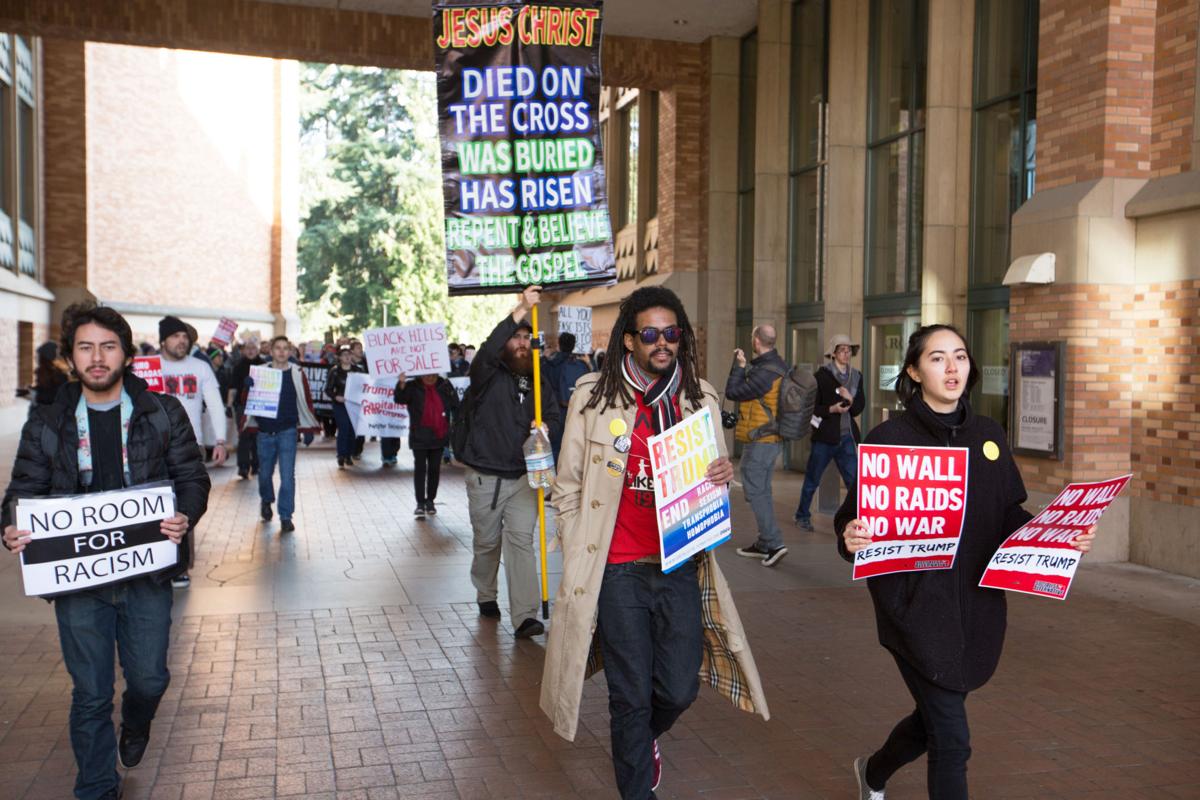 Counterprotest members move from the HUB to Red Square to protest Patriot Prayer and its supporters. 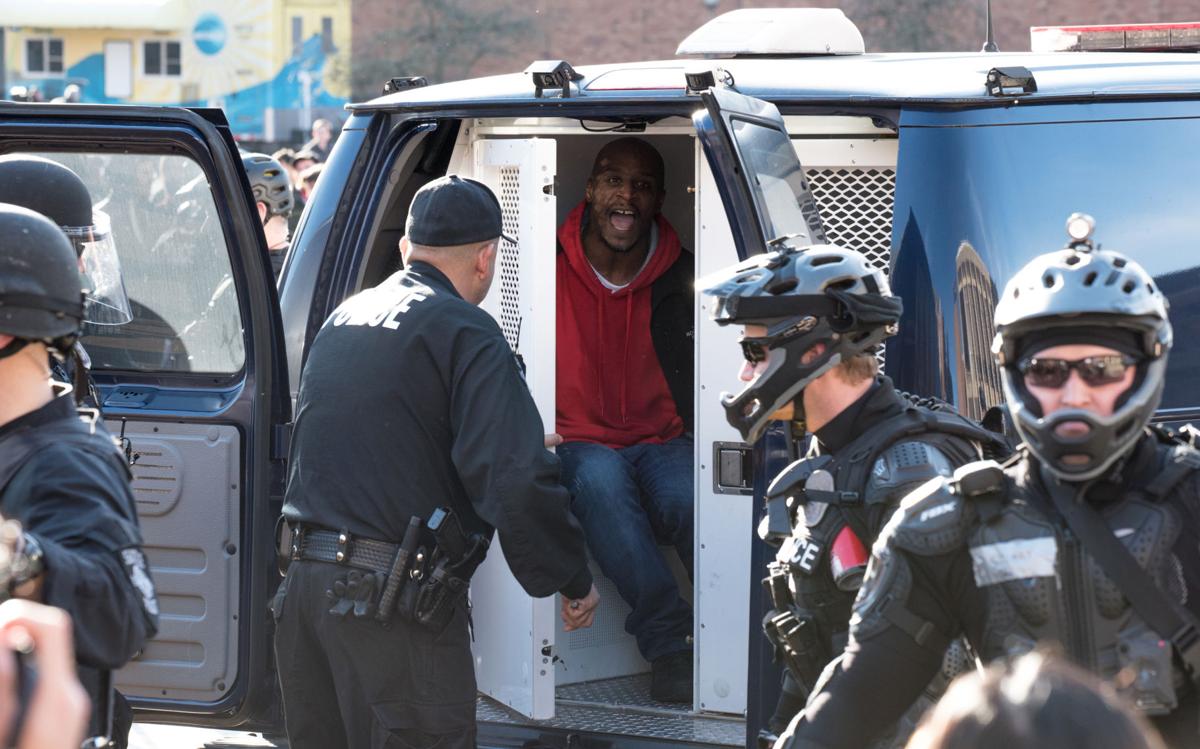 Jamal is put into the back of a police van after being arrested for disorderly conduct at the counter protest against Patriot Prayer on Saturday. 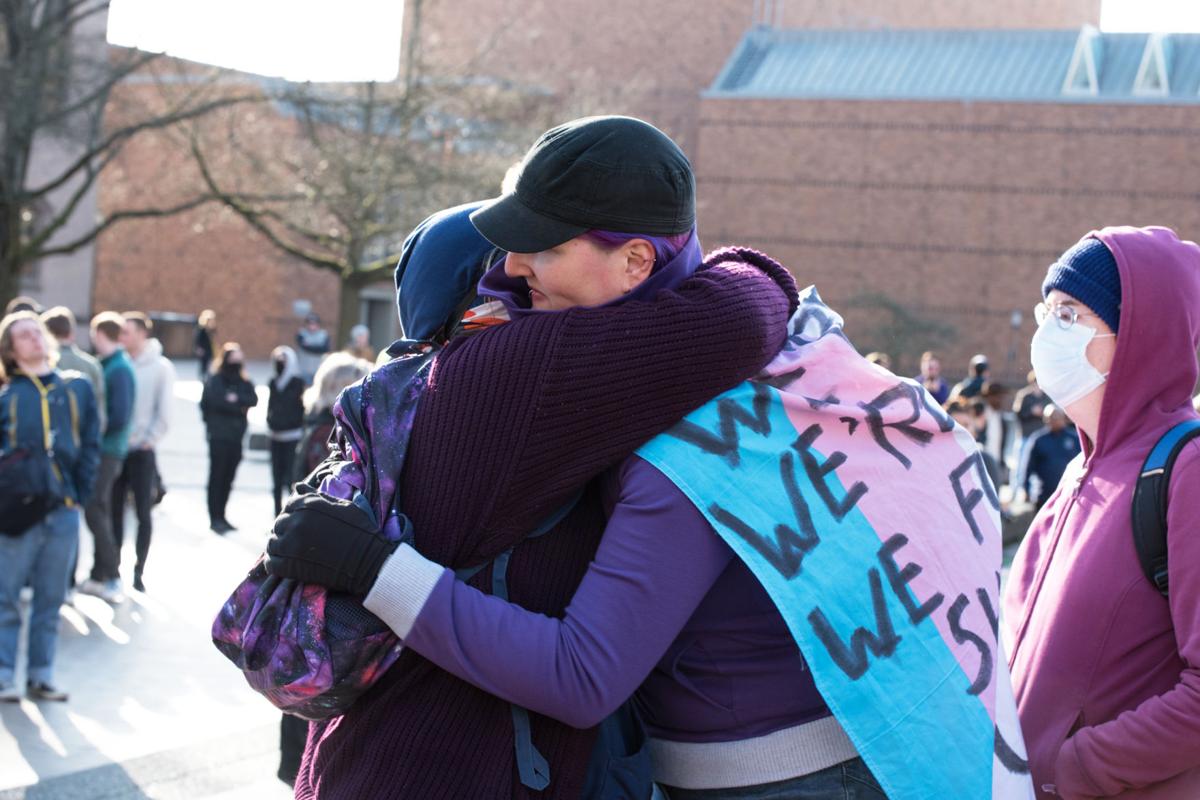 A counterprotester hugs a friend in Red Square. 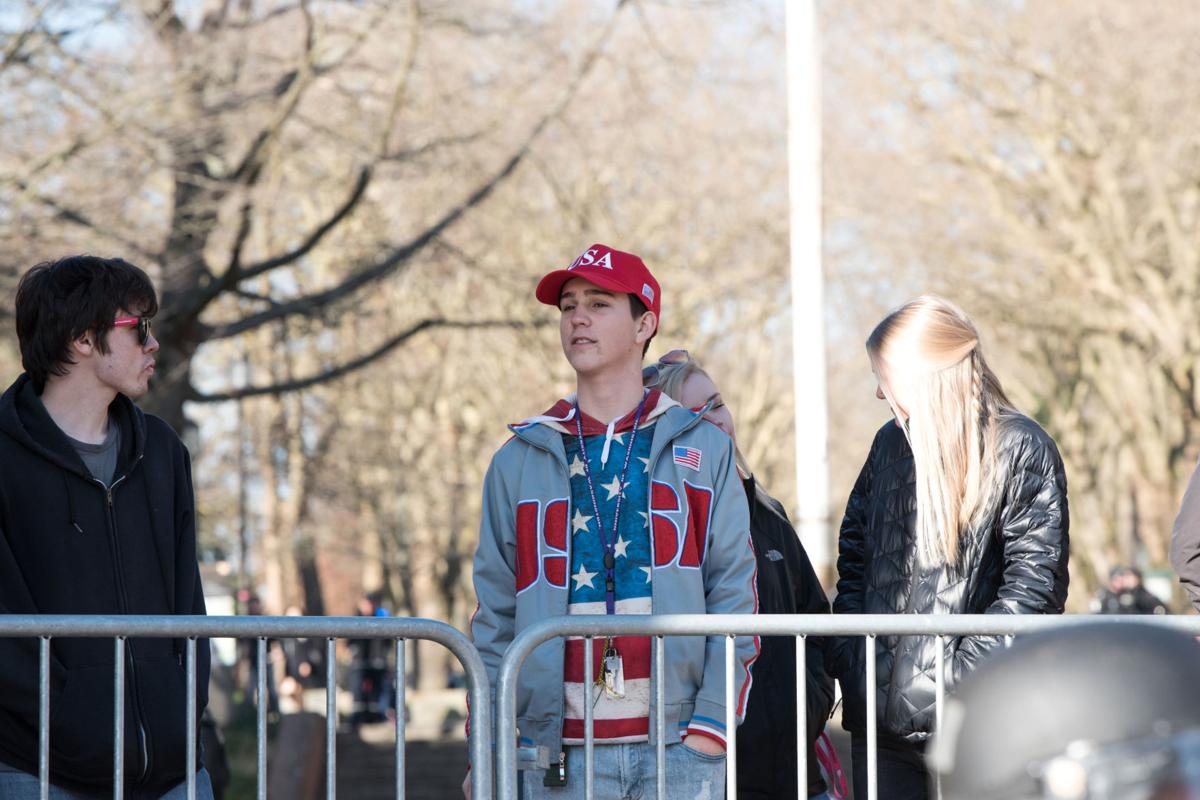 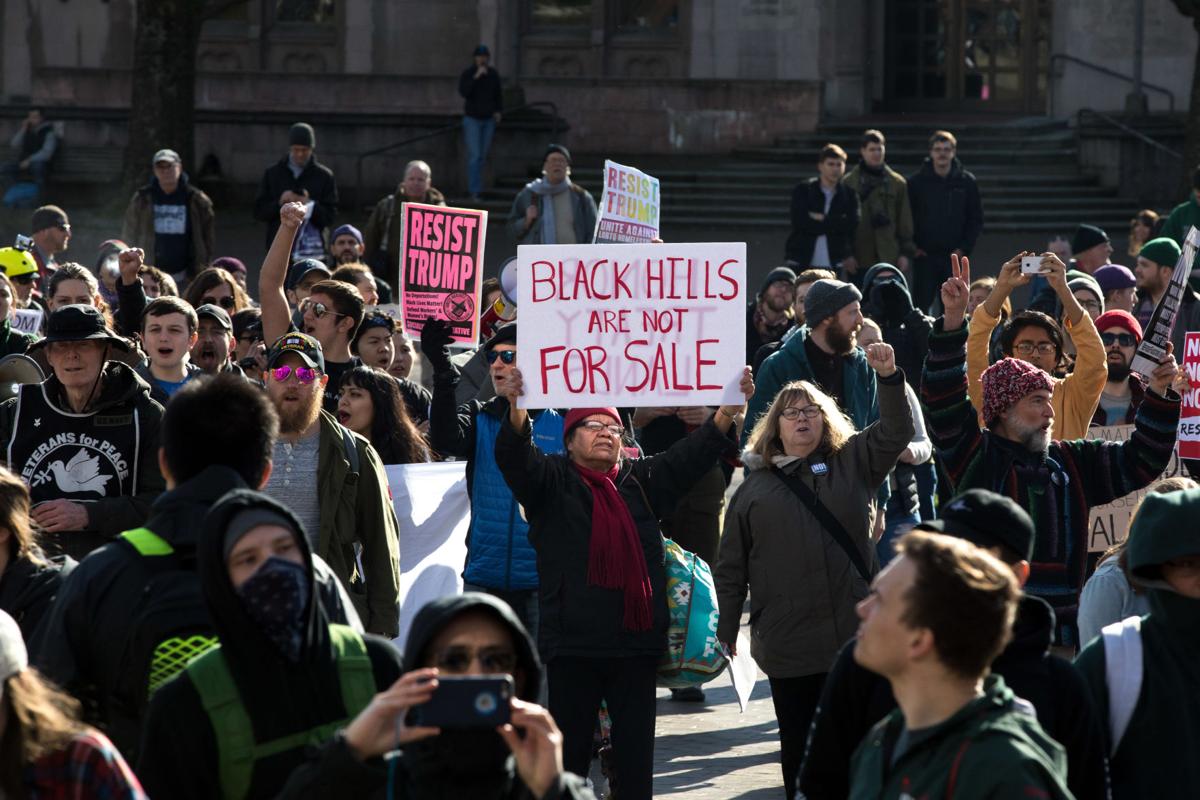 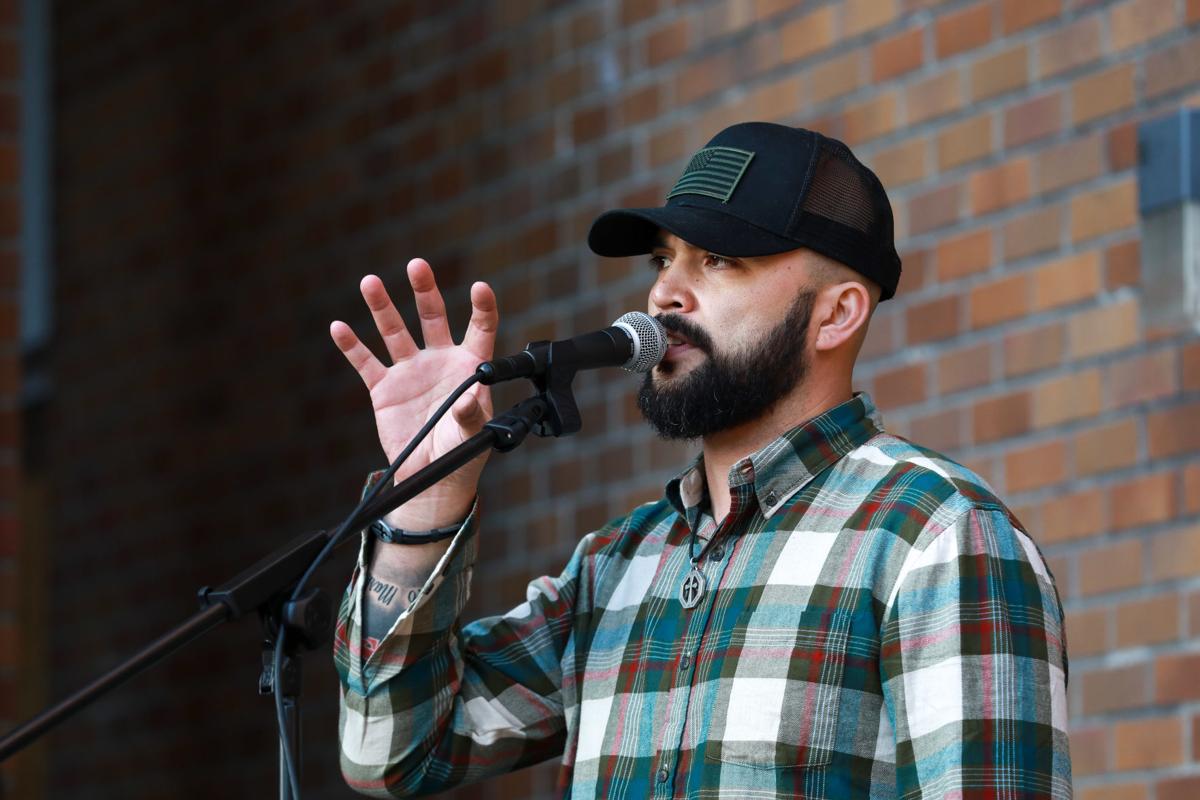 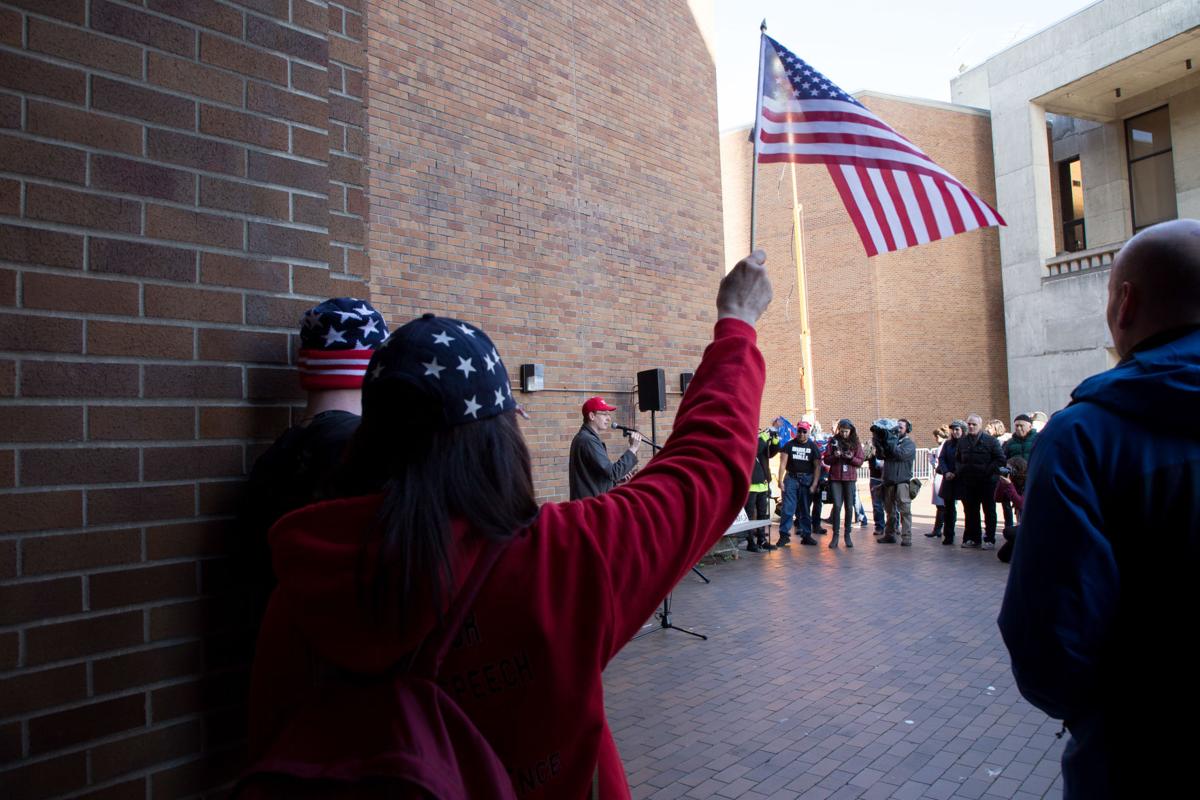 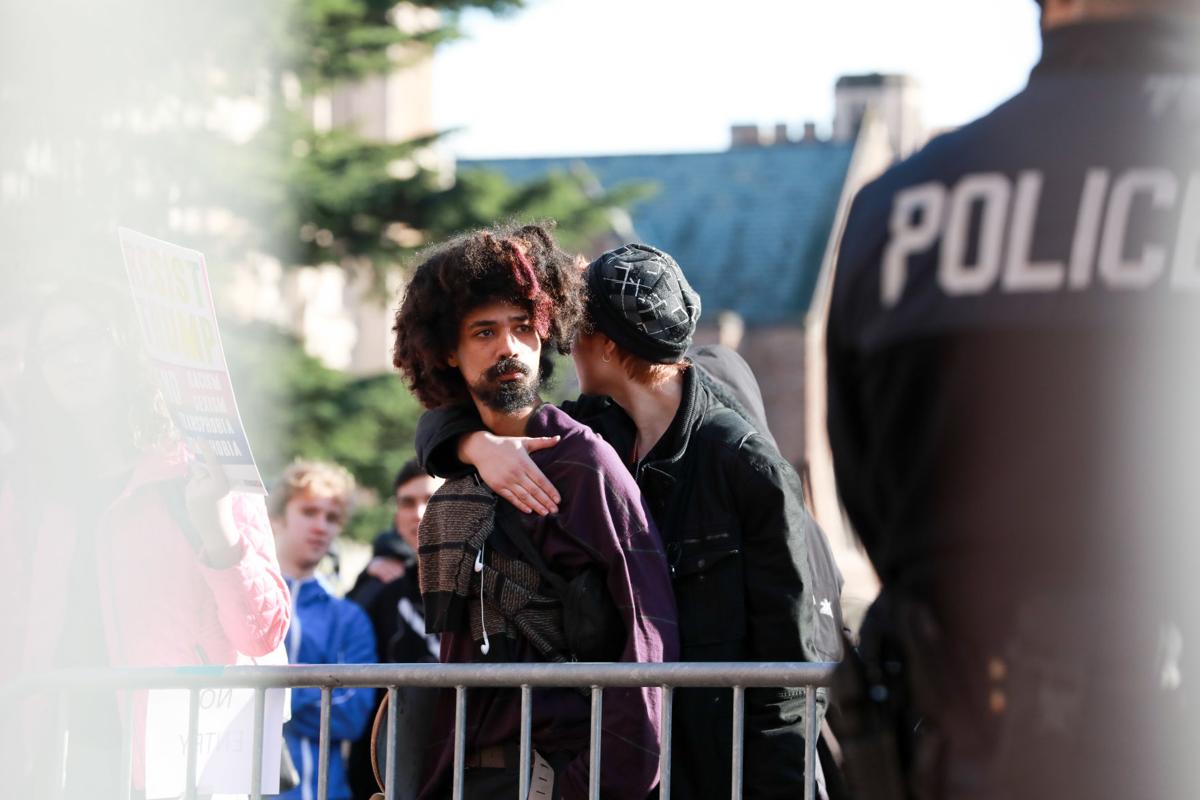 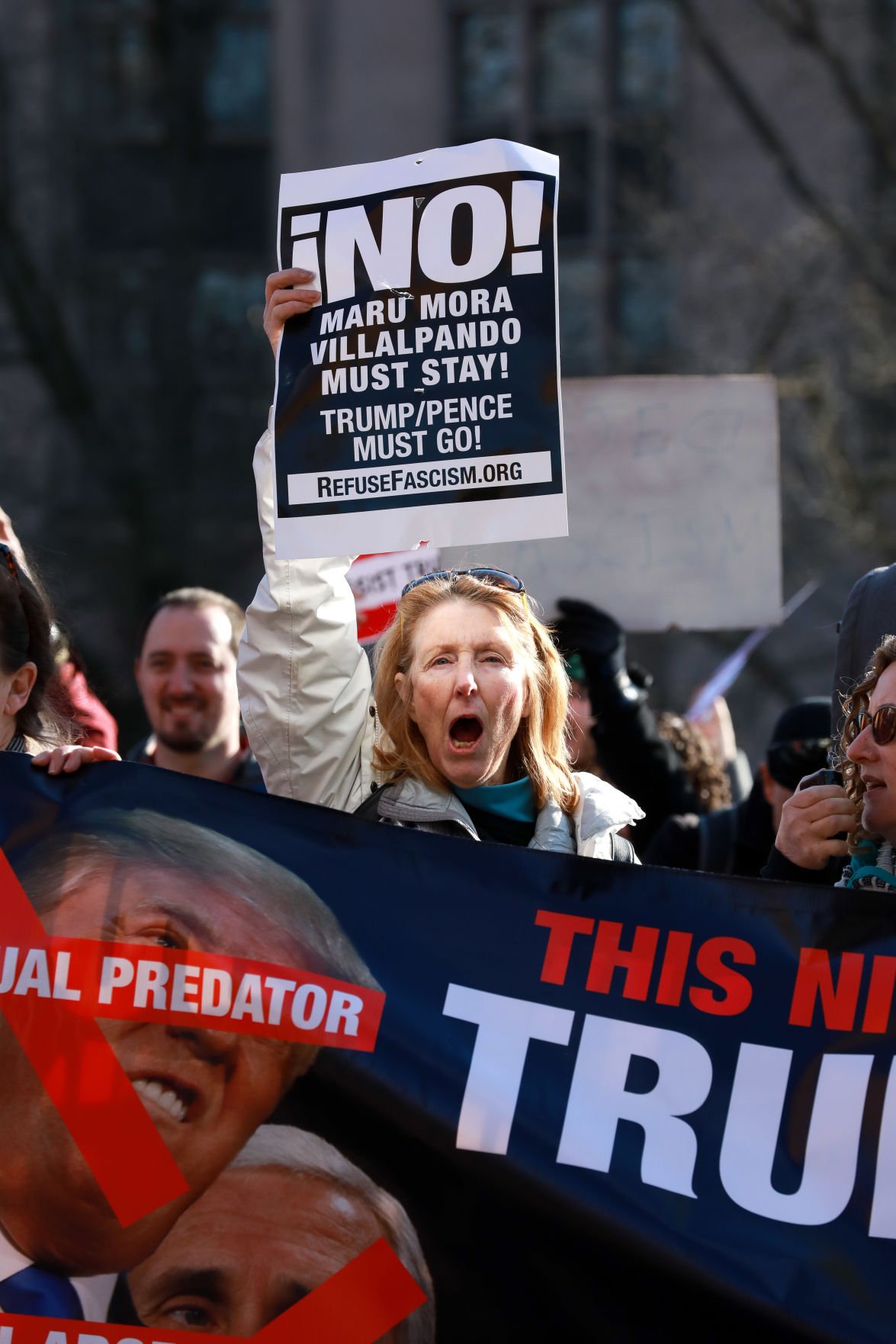 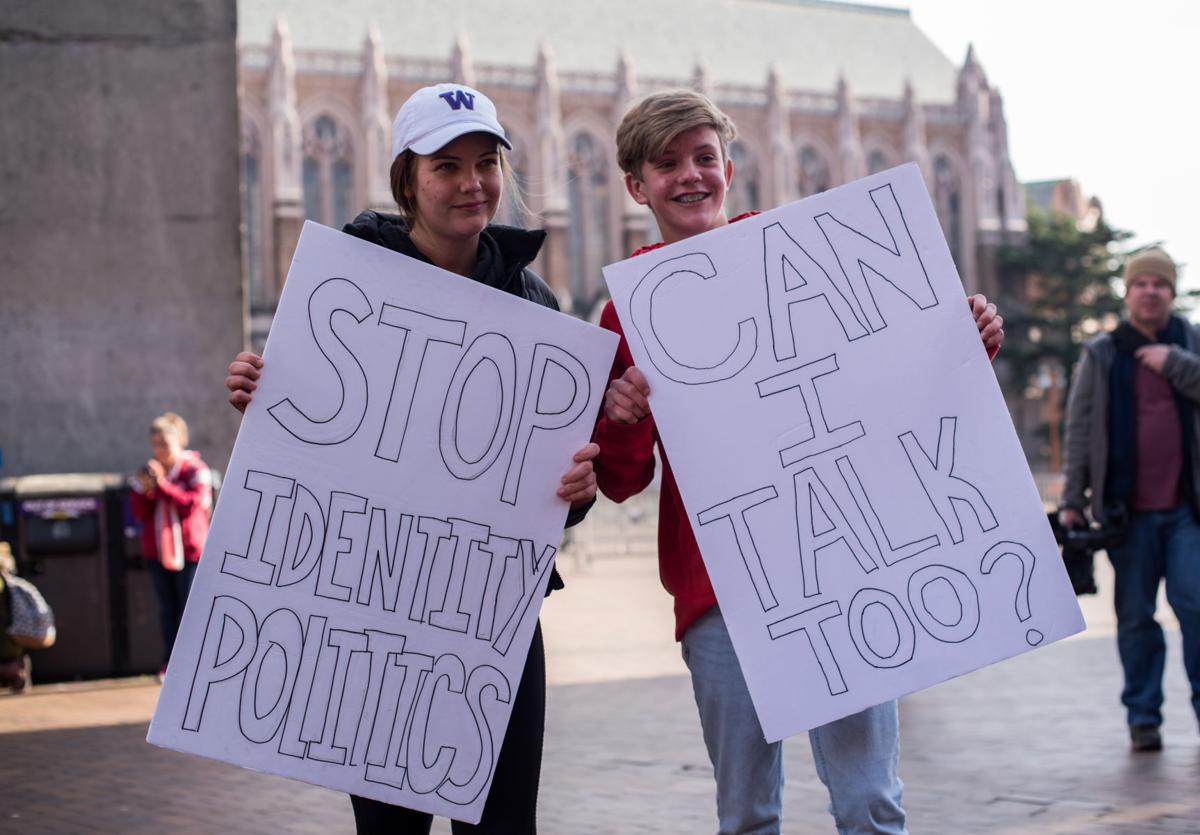 Corrina Garten (left), a UW sophomore, and her brother Joseph, hold their handmade signs at the Patriot Prayer Rally in Red Square. 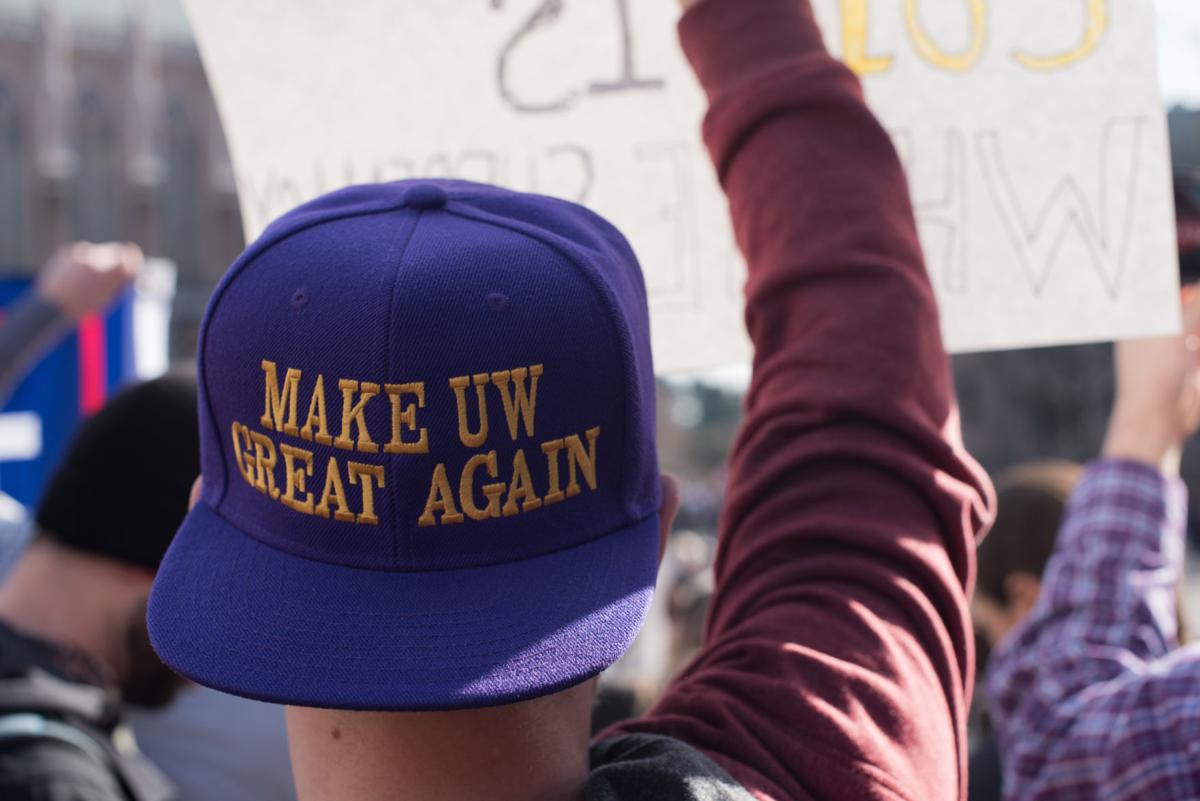 A member of the UW College Republicans holds up a handmade sign at the Patriot Prayer rally. 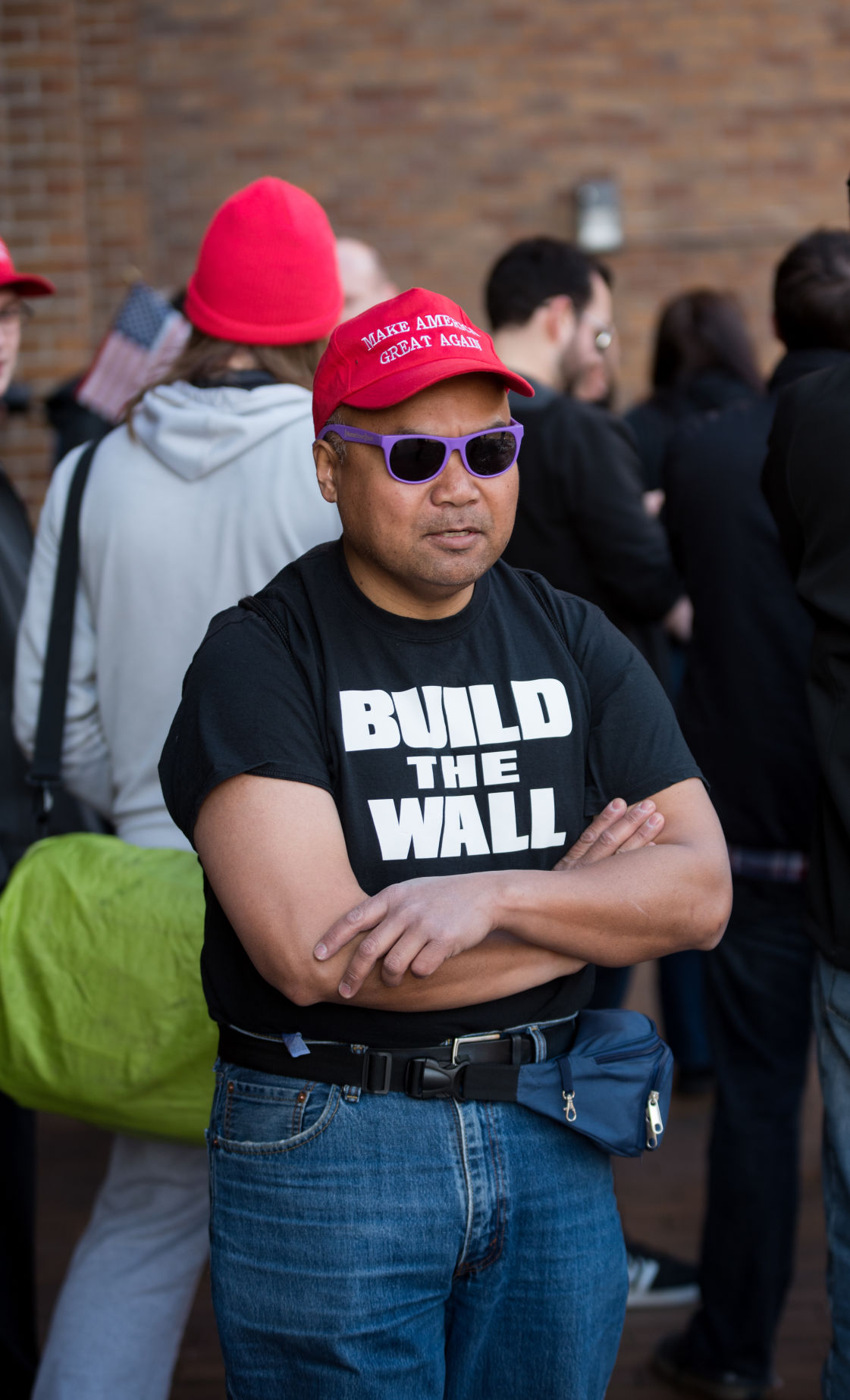 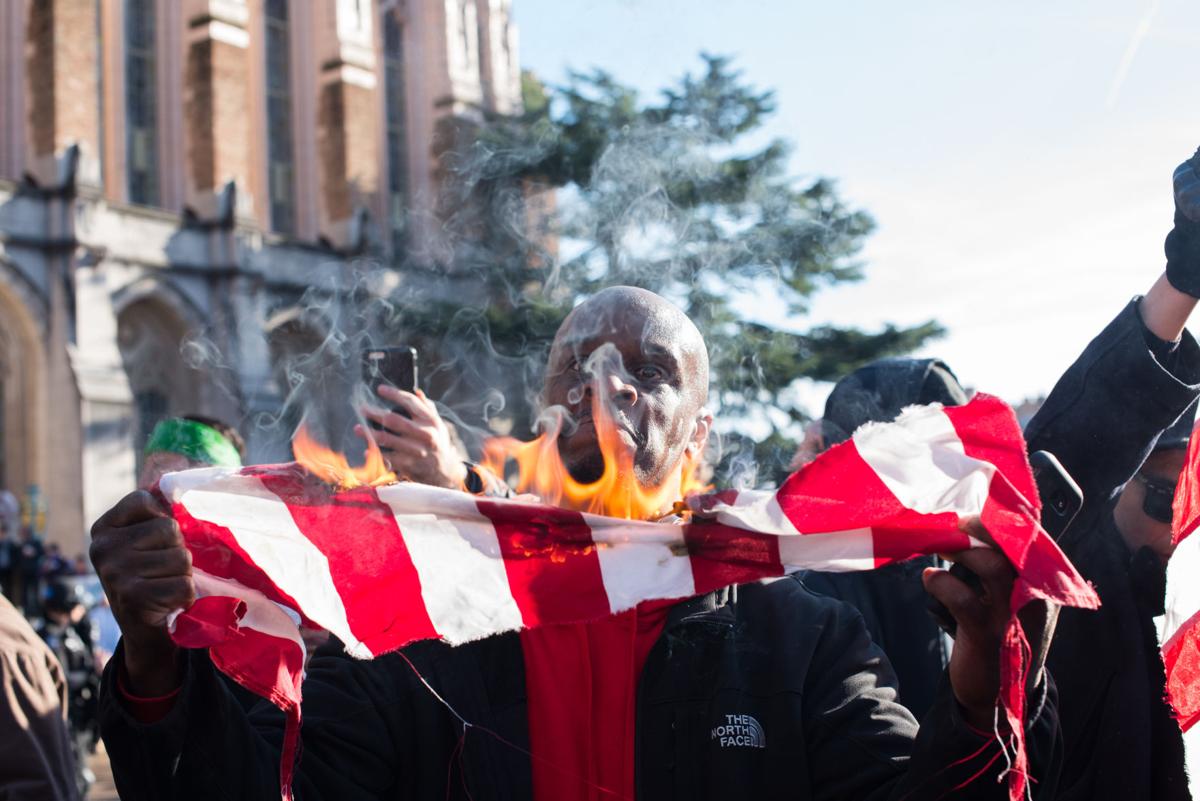 A counterprotester burns an American flag. 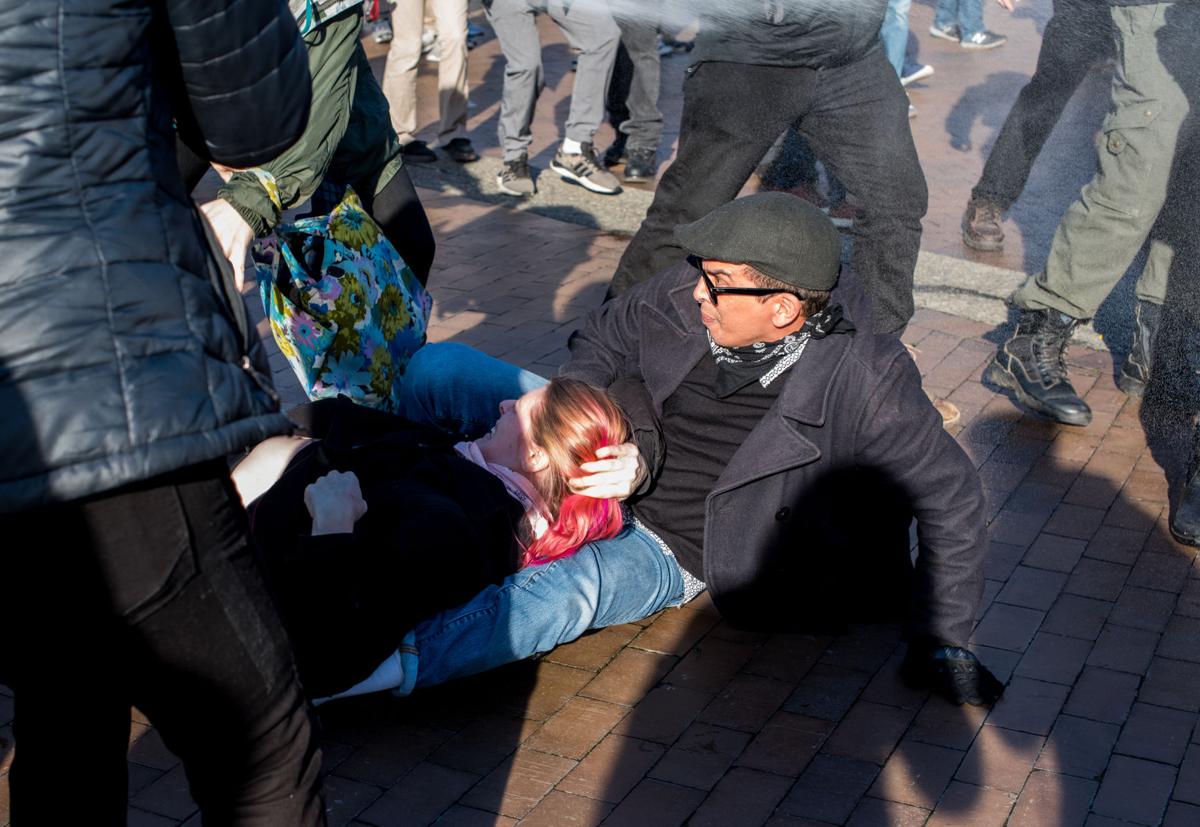 Two counterprotesters are pepper sprayed by police officers after getting into a fight with unknown people. The woman in the photo was arrested shortly after.

Small bursts of conflict arose in a chaotic and charged afternoon Feb. 10 at the Patriot Prayer rally hosted by the University of Washington College Republicans (UWCRs). As members of Patriot Prayer and counter-protesters clashed, UWPD officers pepper sprayed crowd members and five people were ultimately arrested, as confirmed by UWPD Major Steve Rittereiser.

The event was heavily prepared for on the part of the UWPD.

Patriot Prayer supporters and UWCR members were corralled into a corner near the front of Odegaard Undergraduate Library. UWPD had already set up gates blocking the entrance between Odegaard and the three pillars in the middle of Red Square, and from the pillars to Kane Hall. Gates were also placed blocking the entrance to Red Square coming down from Memorial Way Northeast.

On all three sides, there were two layers of gates separated by roughly 15 feet of space. Police officers stood in between the gates, facing outward to Red Square and the counter-protesters. Members of the UWCRs took shifts at the entrance to the barricaded area and decided who would and would not be allowed in the area.

“We want to prevent violence,” UWCR president Chevy Swanson said. “That’s the whole point of the barrier, of the way we’re letting people in and out. Generally if we recognized someone from the club or Patriot Prayer, they were let in. We didn’t let in anyone wearing a mask."

Earlier this week, the UWCRs sued the UW in an attempt to get the university to waive or significantly reduce a proposed $17,000 security fee for the event. A federal judge ruled in the club’s favor Friday morning, granting a temporary restraining order to prevent the university from billing the club for security until after the event concludes. The club will also be engaging in a lawsuit contending that the UW violated their First Amendment free speech protections, calling the security fee “draconian and unreasonable.”

Several campus events, including ASUW’s “Everybody Every Body” fashion show and the Foundation for International Understanding Through Students' CulturalFest Performance Showcase, were either cancelled or postponed due to security concerns.

UW President Ana Mari Cauce released a statement Friday morning asserting the UW’s commitment to “constitutional rights of freedom of expression through our work as a public university,” but also cautioned students to avoid Red Square on Saturday afternoon for their own safety.

At around noon on Saturday a crowd of about 60 people gathered in front of the HUB as part of a counter-protest effort before the Patriot Prayer rally in Red Square. Jane Cutter from the Party for Socialism and Liberation spoke about “the power of the students” to organize. “Hey hey, ho ho, Patriot Prayer has got to go,” the group chanted in order to prepare to mobilize to Red Square.

Student groups such as Huskies for NARAL Pro-Choice Washington helped organize the protest.

Counter-protesters critiqued the administration, particularly Cauce, for encouraging groups on campus to cancel events and suggesting that people stay away from campus.

“We’re here to resist. We all believe that this s--t is wrong. I’m so f---ing terrified right now, but I’m more terrified of what happens if I’m not here,” said a non-binary, transgender counter-protester, who mentioned they were at the Milo Yiannopoulos event in Red Square on Jan. 20, 2017.

Police checked in with the counter-protest at about 12:30 p.m., but the majority of the police presence remained in Red Square. There were 26 UWPD officers in the square, but additional Washington State Patrol, Seattle Police Department, and King County Transit officers were also in the area. Gates were set up strategically to divide Red Square into sections, preventing those attending the rally from mingling with counter-protesters.

The programming began with singing the national anthem before speeches by Patriot Prayer founder Joey Gibson and Swanson began.

Swanson spoke about his experience coordinating with Patriot Prayer to plan the rally.

“I will be $50,000 in debt [if the UW bills us for security],” Swanson said. “I’m willing to let that happen for this event. We need to protest better than them, safer than them.”

Other people rallying behind Patriot Prayer echoed Swanson’s sentiment to protest in favor of free speech.

Gibson commended the UWCRs for having the strength to hold this event and to sue the university in the name of free speech.

“You have the courage to be conservative in a campus filled with communists and professors teaching Marxist ideology,” Gibson said, speaking to the UWCRs and other conservative groups on campus.

Gibson mentioned that he wants to visit more universities this year in order to focus on a younger crowd.

“I want to tell them they got to stand strong,” Gibson said.

“I guess we’re kind of trolls,” Dominick Owen, a member of the Proud Boys –– a far-right men’s organization –– said about engaging with counter-protesters. “We’re here to listen to Joey Gibson. I feel like the patriots are more organized. It’s about showing we won’t be shut down. Authoritarian groups here always shut us down, but we’re just trying to talk.”

Owen was not alone in feeling that his group was being silenced in spite of all efforts to remain organized, tame, and well-mannered.

“The other side has been completely ridiculous; we are well-behaved, we are always well-behaved,” Proud Boys member Justin Bentley said. “You guys [gesturing to the counter-protesters] are ridiculous.”

James Allsup, the former president of the WSU College Republicans chapter and a prominent YouTuber and blogger was in attendance. He was identified at the Charlottesville rally in August 2017.

On the other side of the barricade, counter-protesters continued to chant throughout the day despite pepper spray and multiple arrests.

“For the most part, the protest was nonviolent,” NARAL president Liliana Rasmussen said.

As fights broke out, police quickly intervened with pepper spray and encircled the area with bikes, counter-protester Brandon Gomez said.

“I think we had the best possible outcome given the situation,” Rasmussen said.

“The mood had been pretty good [among counter-protesters],” said UW alumna and Socialist Alternative member Kaitlyn Nicholson. “We have at least twice as many people, maybe three times. For the most part the majority of people have been super organized.”

One person who was arrested, Jamal, yelled his name out loud as he was being carried into a police van. “He tried to get me and now he finally did,” he said talking about a police officer who had pepper sprayed him and detained him.

Around 3 p.m. Red Square began to clear out, as Patriot Prayer and UWCR members exited toward the back of campus.

“I refuse to be scared away by Neo-Nazis,” UW junior Nick Peda said as the day came to a close. “This is where I live and work and where my friends live and work, and I’m not going to leave. The College Republicans keep pulling this stuff and I’m tired of it.

“It’s really disappointing to see so many of my classmates on the other side,” Peda continued.

The UWCRs will continue their legal battle with the university over the proposed security fee.

This article was updated at 6:45 p.m. Feb. 10 to clarify that the UWPD was not forced to pepper spray crowd members.