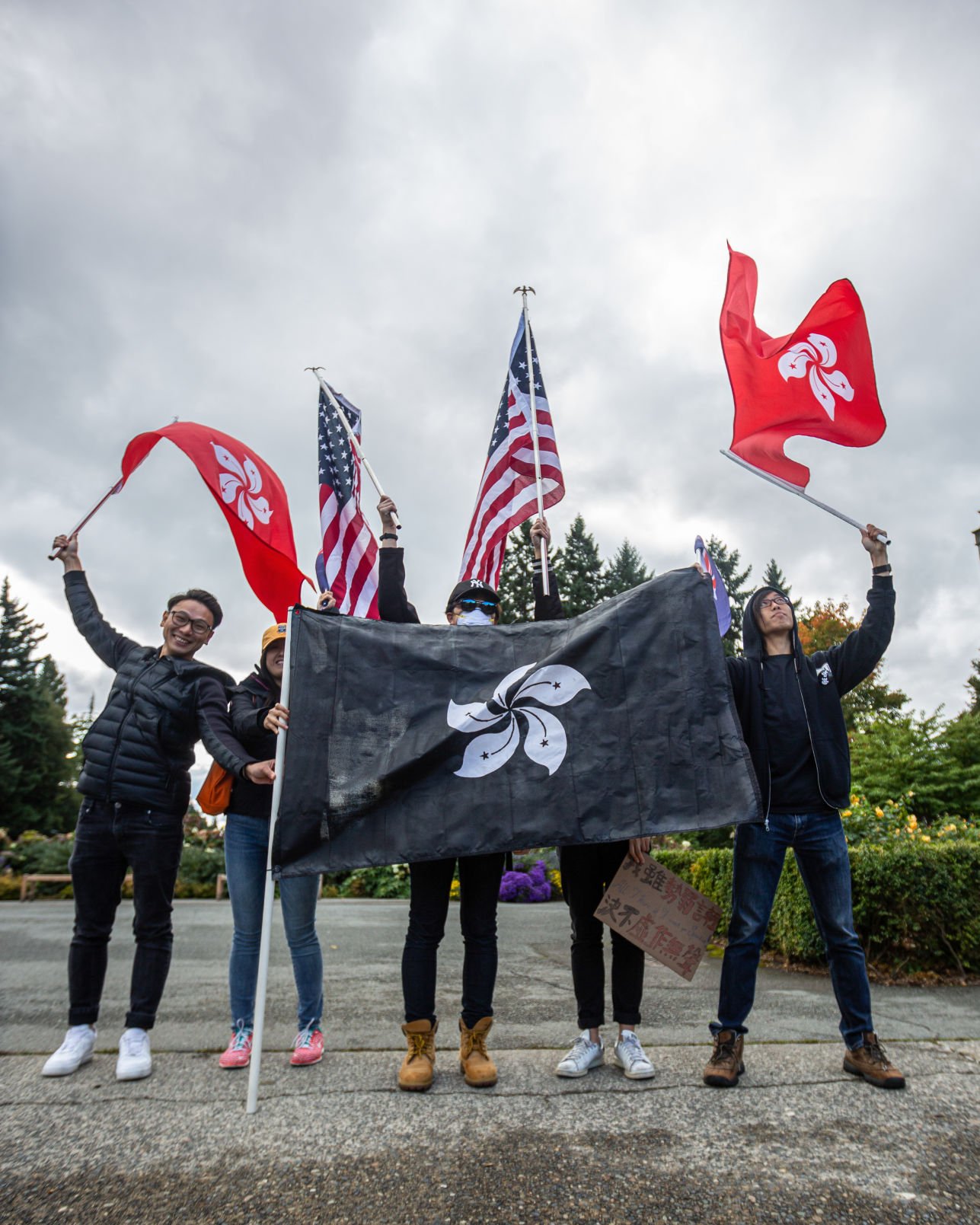 Four protestors display the flags of the US and Hong Kong as well as the Black Bauhinia, a flag created in conjunction with the 2019 anti-extradition bill protests in Hong Kong. 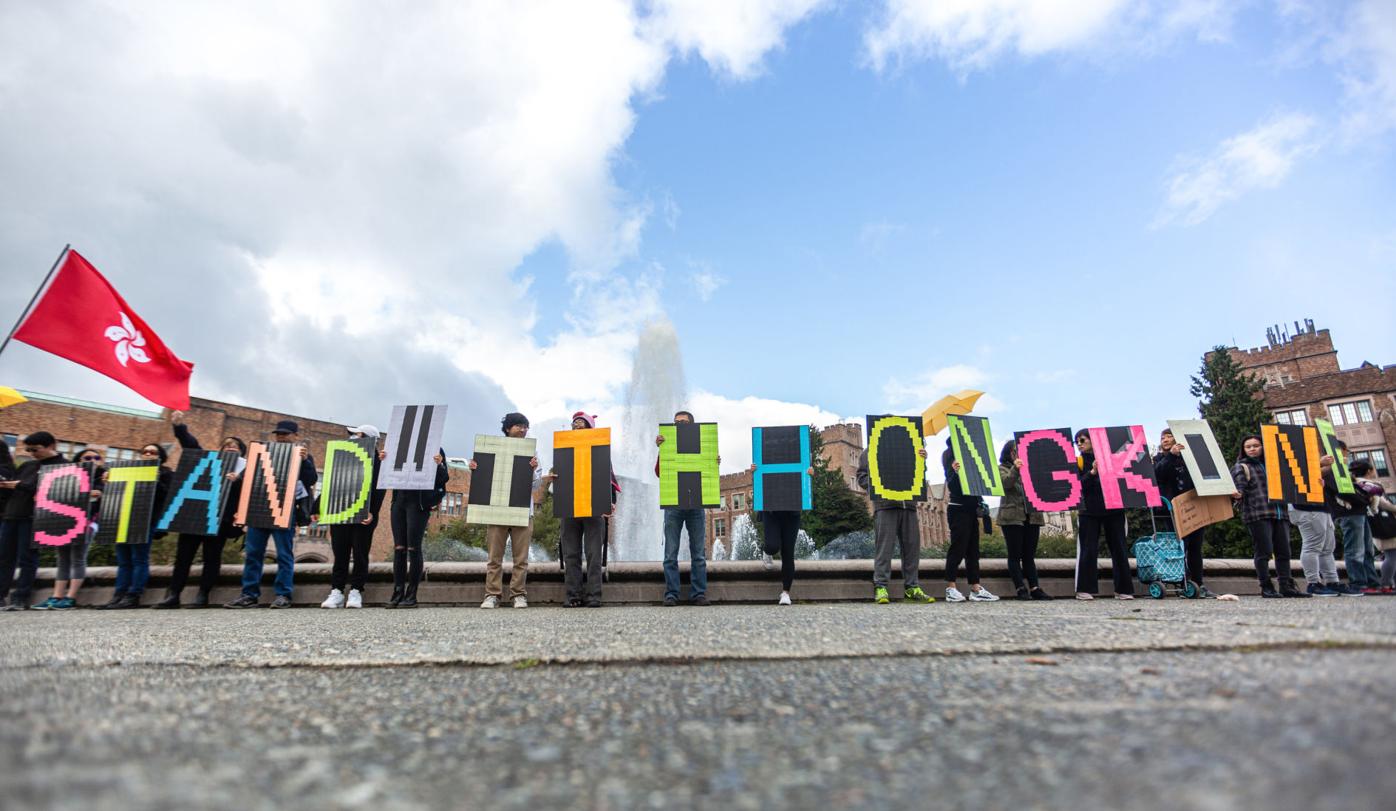 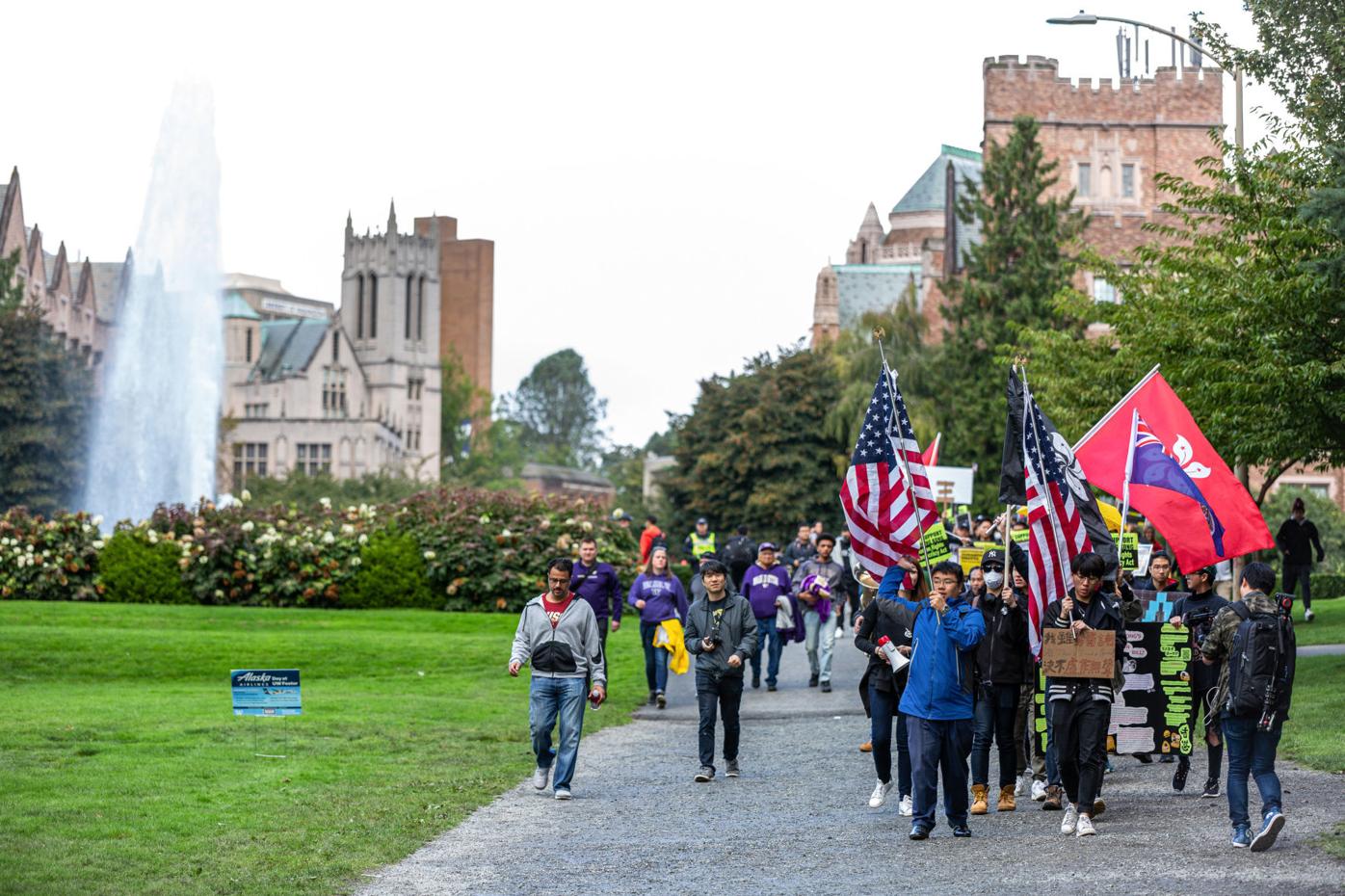 The Silent March passes through Rainier Vista on the way to Husky Stadium.

Huddled together outside of Husky Stadium, a crowd in black stood together in silence amid the yelling scalpers and football fans queuing to get to the football game. Spanning the bridge connecting Rainier Vista and the stadium, large colorful letters spelled out “STAND WITH HONG KONG.”

Despite this glaring juxtaposition of silent protesters and football fanatics, many passing tailgaters offered verbal support, some passing by with a fist raised in solidarity. Pamphlets detailing the situation in Hong Kong were picked up by students and parents alike.

“In 2014, in Hong Kong, we started a movement called Occupy Central with Peace and Love,” UW graduate student Sallie Lau, who was in attendance at the march, said. “It was to advocate for universal suffrage for Hong Kongers and democracy. Demonstrators occupied different places in Hong Kong for 79 days.”

The call for universal suffrage refers to the people of Hong Kong’s criticism of the Chinese government’s control over Hong Kong’s democratic process despite them supposedly being separate entities.

“The whole Umbrella movement was in response to a promise made by China that the Hong Kong people would have a path to universal suffrage,” UW alumni and protest organizer Bryan Lee said. “China decided that we can get to vote for the chief executive of Hong Kong, but all of the candidates are vetted or chosen by China. That was what the movement was responding to. It is for real universal suffrage, not a fake one.”

Now five years later, universal suffrage is one of five demands the people of Hong Kong have for their government. Other demands include the release of those arrested for protesting, the withdrawal of the Hong Kong extradition bill, the dissolving of the Legislative Council by administrative order, and inquiry into police brutality.

Some protesters Saturday were also present in Hong Kong this summer during larger demonstrations. Lau described her personal experience with protests in her hometown.

“The police would arrest people and start beating them up for no reason,” Lau said. “In detention facilities there are also a lot of human rights violations. At rallies police throw tear gas all the time … the lack of police justification for their actions is troubling.”

One protester who wanted to be referred to as A. Nigel Leigh explained that many of the demonstrators were wearing hard hats similar to the ones Hong Kong protesters use to lessen the damage dealt by police beatings.

Being passed out at the beginning of the protest were signs advocating for the passage of both Senate bill 1838 and House of Representatives bill 3289, which constitute the Hong Kong Human Rights and Democracy Act of 2019. This act would direct the U.S. Department of State to report annually whether Hong Kong is sufficiently autonomous from China, which would determine whether Hong Kong remains viable for its unique treatment in regard to the United States.

“A group of different Washington constituents have been meeting up with U.S. representatives and senators in our state to push for support and co-sponsor the H.R. 3289 bill,” Lee explained. “We are not just asking for support for the Hong Kong people, but also action from them as well.”

The act is an incentive for the Hong Kong government to remain autonomous from China as well as to respect the human rights of its citizens if it wishes to continue benefitting from separate US agreements that do not include China. Despite having been introduced by Republican lawmakers in the House and Senate, the bill has largely been a bipartisan effort.

“The bill finally cleared the Foreign Affairs Committee,” Lee continued. “Speaker Pelosi said that the Democratic Party is in full support of this bill.”

The protest was not entirely devoted to one issue or another, but rather a visual demonstration of support by those overseas.

“First of all we want to let the people in Hong Kong who have been in this fight for months or years know that Hong Kongers overseas, whether they are studying abroad or even immigrants, support the democratic movement,” Lee said. “Hopefully this march can show that people even overseas care.”

Just a guy getting to the bottom of it.

Hi. I love your report. Thank you for sharing. I have not seen many articles addressing the protest and the human rights issue in Hong Kong. I don't think this report is biased. Freedom of speech is the basic right and it is fundamental in a democracy. I believe in the Hong Kong people and am disappointed in the approach of the government and the law enforcement.

@Charles Kappes, call yourself " the guy trying to get to the bottom of it" ?

are you just kidding me, with an article like this, you will never be a REAL reporter.

Here are some links will help you learn SOME FACTS, if you really care, spend two hours to do some homework first.

Rioters in HK have been throwing gasoline bombs and bricks to the police, using laser pens, committing arson, intentionally blocking roads and destructing subway stations. One police officer got his finger bitten off; countless HK people who expressed their opposition to such a violence got beaten up; not even saying people got shouted at "Zhina, go back to your country" just because they speak mandarin. Seriously, go do your research and come back to tell us, if those are not violence and discrimination, then what are they?

As a UW student, it's truly shocking and shameful to see such a biased report on UW Daily, as it's conveying a dangerous message on what "democracy" and "freedom" symbolize. I understand that everyone has the right to take a standing, but reporters should be aware of their writings' impact because you never know how much hatred can be caused just because of a few words.

Please do investigate before composing an article, especial it is an article about a foreign country's human rights issue that happened thousands of miles away. The protesters here are peaceful yet not the same in Hong Kong. For example, google the original video about the Hongkong shooting happened around 10/1. The protesters were using GASOLINE BOMBS and other dangerous weapons to attack police. Think about if the same thing happens here, it equals to and even worse than if the protesters on the red square two years ago shoot/attack the police. Will one say the same thing to the American protesters?

This is a very biased and inauthentic article. This is my first time to feel shameful that i graduated from UW

If hongkongers have asked your British daddy for democracy, I will respect you more. I dont see what you asked can solve the deep problem in HK society. What I see is pure riots and populism.

omg so biased. Do you really know what's happening in HK? Do you know those protesters randomly beat up people in the airport or the subway station?? Please do not spread reports like this UW Daily!!

‘But... but ... they are protesting China’ sobbing the leftist liberal, ‘China bad anti-China good, I was so triggered, although I know nothing sh*t about Hong Kong and what those rioters did’

Plz do things in a respectful way. Think thoroughly before you call something “democratic”. I don’t know if you‘ll still call it democratic if you know how violent they become and how much blood behind this. PLEASE STOP SPREADING HATRED UW DAILY

[angry]Such a biased post. Only two people showed up in this report. If you do want to get an objective post, just have a vote or a massive interviews on students at UW. Many statements are very misleading. For example, according to the report, "Many people are beaten by police with no reason." But does the reporter or the interviewee could define "with no reason", or it is simply that you don't know the reason. Similarly, polices were reported to throw tear gases to the crowd, but nothing was reported that the riots were attacking the police, which is never allowed in any developed world. I really cannot believe that UW allows such biased, one-sided report to be released in UW daily.

Perhaps one of the most bias report I have ever seen, the whole report is talking about one-side of the story, have the reporter even did any research on what he is reporting? or at least interview someone who is from mainland china not just people from Hongkong of China? and yes, Hongkong is a city in China, not a country. Many of the protestors are trying to separate hong kong from china, and they had burned the subway, hurting and kidnapping news reporters from the mainland (that's why most of the people here only see one side of the story). yet these violent actions are been painted as "fighting for freedom" in the majority of west media. This is like people in Seattle say "oh Seattle is a country" and people ask what's the proof, and someone tells you "oh, because I believe Seattle is a country" lol. btw, if we gonna go democracy on this thing, why don't all 1.4 billion Chinese people vote on this issue? Because HongKong is just a city in China.