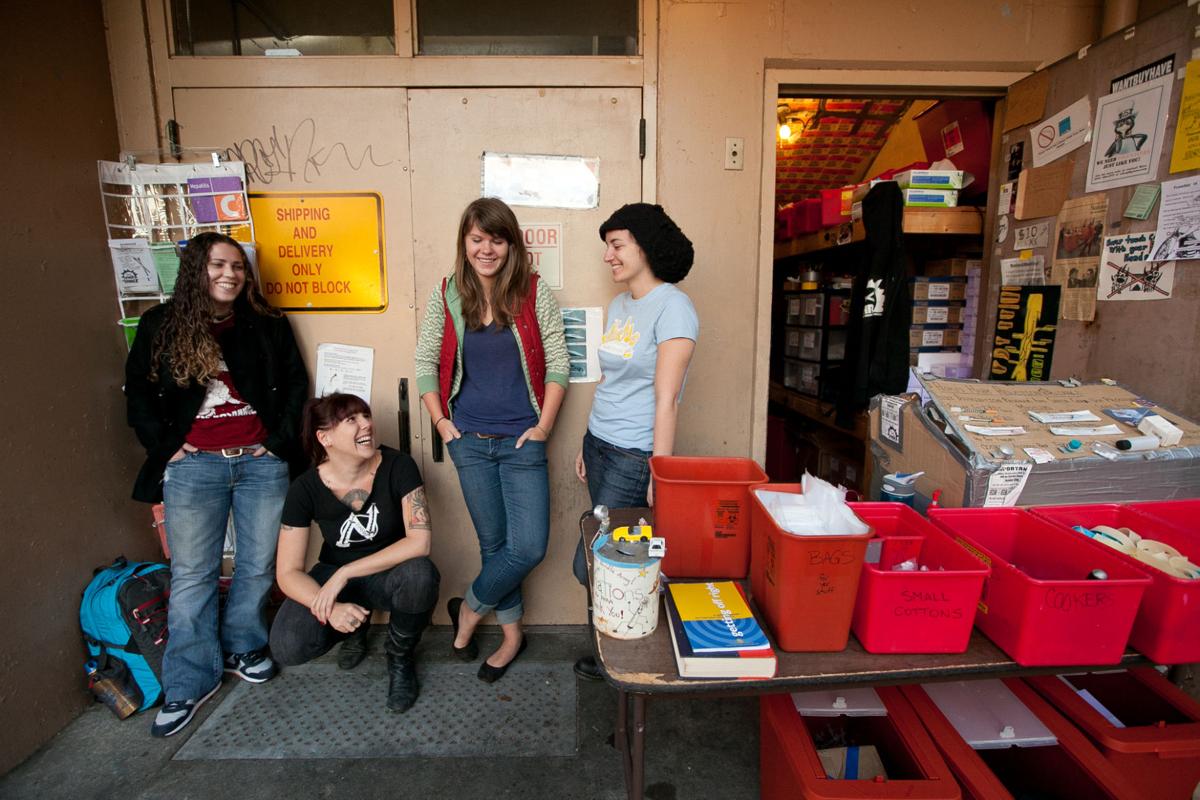 Alex Seidman, Ria Tsinas, Kelly Wilkinson, and Joelle Puccio hang out outside of the U-District Needle Exchange on a Women's Day Tuesday. 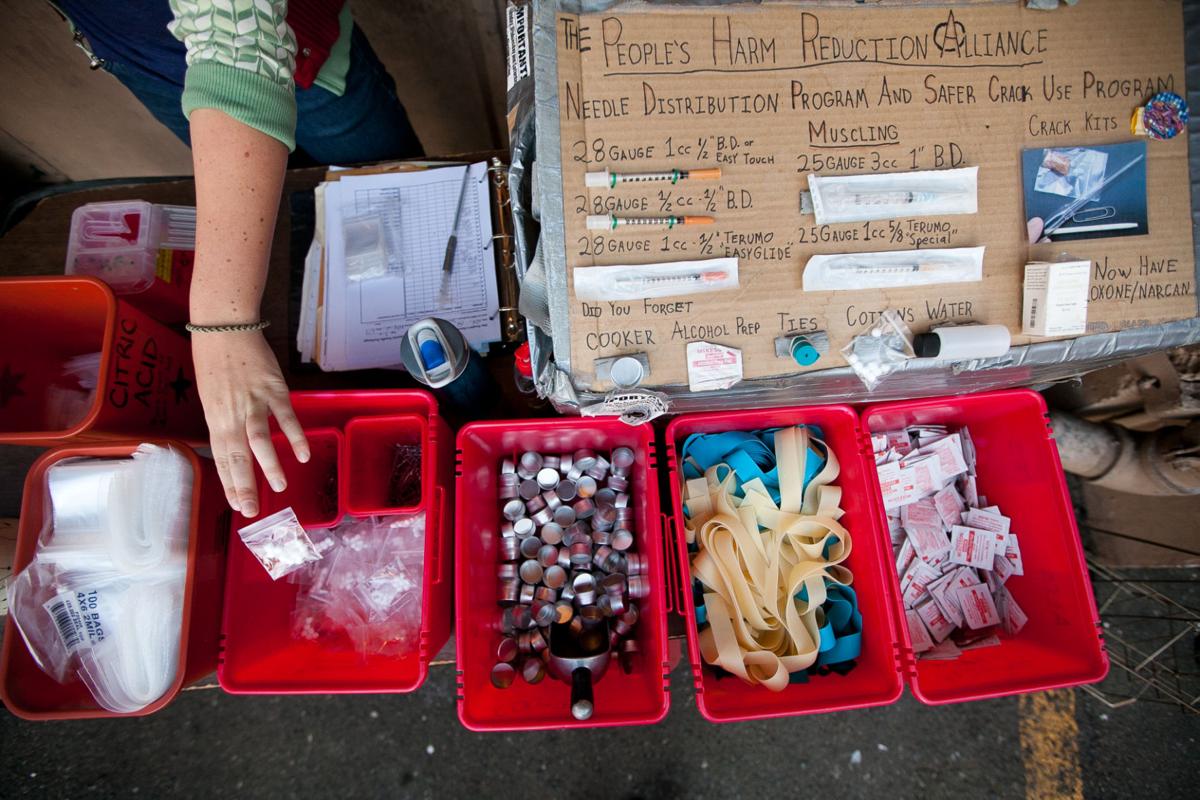 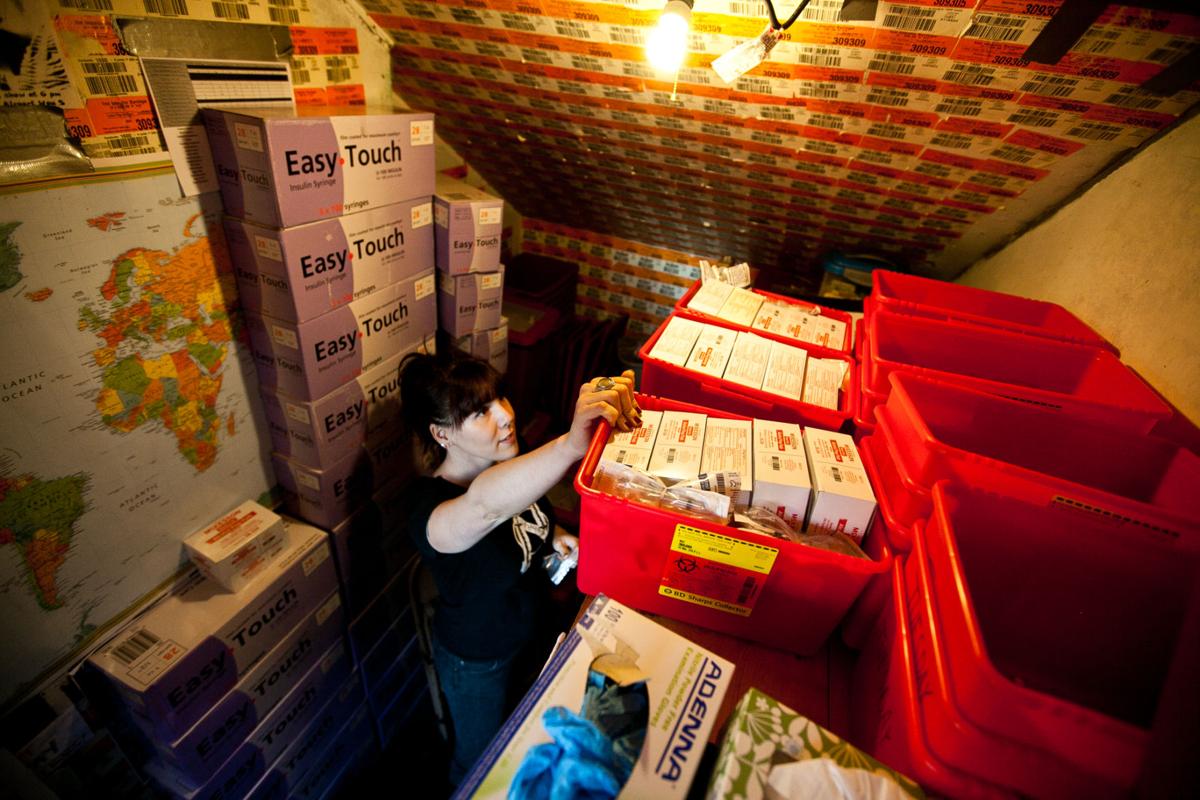 Women's Day Organizer Ria Tsinas takes supplies out of the PHRA's storage room that is sunk into the side of University Temple. 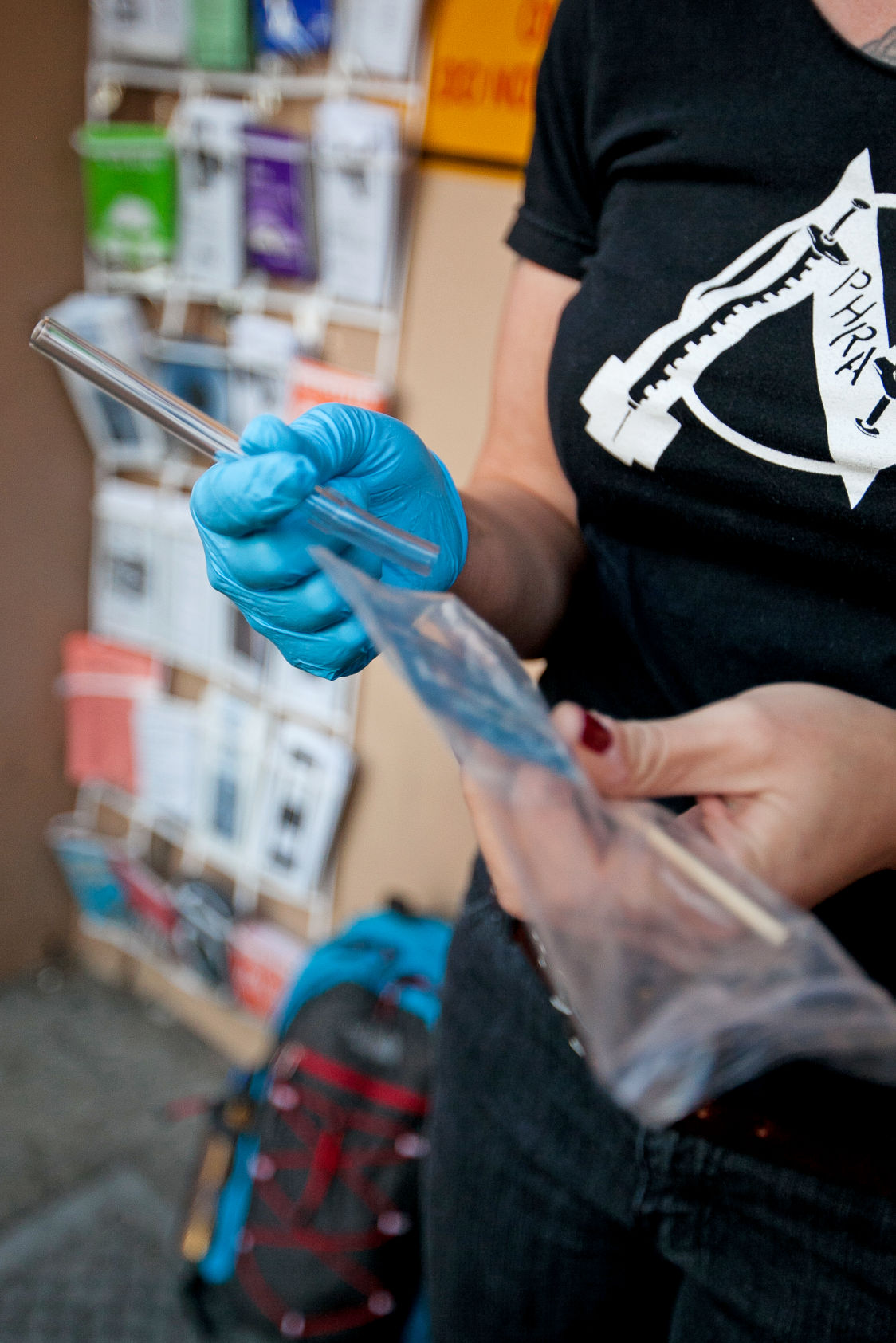 Tsinas holds a PHRA crack kit. The independently-funded crack-kit program is the only one of its kind in the nation.

Alex Seidman, Ria Tsinas, Kelly Wilkinson, and Joelle Puccio hang out outside of the U-District Needle Exchange on a Women's Day Tuesday.

Women's Day Organizer Ria Tsinas takes supplies out of the PHRA's storage room that is sunk into the side of University Temple.

Tsinas holds a PHRA crack kit. The independently-funded crack-kit program is the only one of its kind in the nation.

Ria Tsinas, an organizer and volunteer for Women's Day, works a shift with three other volunteers in the alley behind the Ave's post office. The continuous, lulling flow of drug users comes in small drifts to the needle-exchange table. The four women work together like longtime friends, their easy banter and generous laughing interrupted occasionally by a client who needs to exchange syringes or pick up a crack kit.

Seattle's community-run Needle Exchange Program (NEP) is Seattle's only needle exchange to offer a day of services geared toward women, offering services that provide safe drug use - including clean needles and crack kits. Every Tuesday, it's Women's Day at the NEP, a program that's serviced by an all-female staff and geared toward female drug users. People's Harm Reduction Alliance (PHRA) first began operating Women's Day in the U-District in 2009, run strictly by volunteers.

From Tsinas' view, the philosophy behind PHRA's programs is self-education. If users are aware of the effects and consequences of drug use and abuse - like high-cost hospital care, imprisonment, mental health care, and unemployment - and about how to practice safer drug use, money that would otherwise be set up in the nation's hospitals, rehab centers, and prisons would be saved.

"All of those things are grossly high [in cost] compared to arming a person with the ability to educate themselves and empower themselves by making the right choices about their health," Tsinas said, "like you would giving someone condoms or doing what you normally would in any other kind of public-health situation."

The U.S. Office of National Drug Policy (ONDP) estimated that in 2007, 32.3 percent of about 1.8 million admissions that year to drug and alcohol treatment in the United States were from female drug abusers. In the 2011 National Drug Control Strategy, the ONDP makes note of the country's unavailable resources for treatment tailored to women and children. Tsinas' perspective on the issue - developed from volunteering for PHRA for a year and a half and working for YWCA in Seattle - couldn't be more similar.

"There is definitely a deficit [in female-specific programs]," Tsinas said. "We're still sort of considered a minority in the whole population. There [are] less of us than there are of men, so there's obviously going to be a disparity."

Women are more susceptible to being stigmatized if they are drug users, Tsinas said, and she hopes more programs like PHRA's Women's Day will bring about a change in the way drug abuse is viewed. She said drug abuse must be seen and understood as a health issue and not a moral issue.

"When you're dealing with women in a drug population, you're faced with a whole set of different challenges than just with men," Tsinas said, referring to trends of women selling sex for drugs and domestic violence being more often experienced in the female population. "So, as a result of that, there's a lot more resources that need to be available, in my view. And, for [people who are] drug [users], there's already stigma attached. [For those who are] female drug [users], I think there's even more stigma attached."

Shilo Murphy, who has been the executive director of PHRA since its inception in 2007, also agreed that society tends to be less accepting of women who use drugs.

"We felt that there's a large amount of sexism within the country - and drug users are no exception - that within the drug-user community, [there's] sexism just like in the regular community [there's] sexism," Murphy said animatedly, who grew passionate when he spoke about issues of sexism in society. "And with drug use, sometimes that can exacerbate different power dynamics within relationships."

BABES Network-YWCA (BABES) is a peer-based program in Seattle that offers support, advocacy, outreach, and education for women who are HIV-positive or have AIDS. Nicole Price, program manager for BABES, estimates there are only 10 women-focused groups like BABES in the nation and notes that BABES is the only women-based center for HIV/AIDS in the state of Washington.

"It's been proven that women that are getting the support through BABES are more likely to go to their doctor, and follow through, and be taking their meds ... because they have that extra support," Price said. "A lot of times women just decide that ... everything else comes before them. So their kids, their husbands, and their jobs, and they always put themselves and their health last."

Price believes that, while the stigma surrounding women who suffer from HIV/AIDS has abated, it is still prevalent - and BABES helps support those who face that stigma.

"I think it's definitely gotten better, but not nearly as good as it should be," Price said. "The stigma is still there for women."

Price points to Washington's NEPs as a reason for the reduced number of women being infected by needles used to inject drugs.

"In our state, I think because we have the needle exchanges, we don't see a lot of women at BABES that are infected through injection drug use," Price said. "Like in Washington, D.C., they have a much higher number of women who are injection drug users. ... But for our state, it has been a lot different for us because we have access to the needle exchanges."

However, PHRA faced budget cuts in 2007, cutting down the operating days of the NEP from seven to four days a week.

Murphy's goal from the beginning has been to make the NEP more client-oriented. Not only is the program run strictly by volunteers, but Murphy said that many of its volunteers are users themselves, allowing the NEP's services to be tailored to the needs of its clientele. Alex Seidman, vice director of PHRA, describes the PHRA model as "one-to-one," accepting input from the people it serves -- and that's the difference between Public Health's operations and PHRA's.

"I really came [to PHRA] with the model that hadn't been used before and that was [letting] the people who deserved to dictate the service they received," Murphy said. "I came to it as much more of a human-rights question - that drug users are being discriminated in our community and in our country, and it was time for change. It was time to treat them as human beings."

That attitude is shared by Joelle Puccio, a registered nurse who sometimes works shifts with Tsinas, Seidman, and volunteer Kelly Wilkinson. Puccio started with PHRA in February 2010. Puccio said she wants to dedicate her work as a nurse to "tak[ing] care of the people nobody wants to touch."

One of the goals of the PHRA staff is to receive input from their clientele. A two-week survey was conducted by PHRA staff with clients that were willing to participate. Interviewers asked questions in hopes of getting a better understanding of what kind of services women would prefer to see provided by the PHRA and whether they were interested in a day tailored to women.

The team asked participants whether, for example, they were interested in referrals to drug treatment, domestic violence and community outreach programs, and dental care. Volunteers are now in the process of trying to organize and implement the requests they received from the survey. PHRA already provides vein care, hepatitis-C testing, and a van delivery service, but adding Women's Day services means the beginning of basic health classes, provisions for dental care, and detox referrals that were not already a part of PHRA's services.

For Tsinas, the difficulties of launching the ambitious program come from having such a small staff.

"We are small, ... and we're all volunteers, so it's hard to get stuff off of the ground," Tsinas said.

Gauging the success of the programs will be difficult, however, until they have organized and put plans in motion for an extended period of time.

"Once those things start to happen, I think we'll start to see the numbers [of female clients to the needle exchange] increase, but it's hard to gauge a real change because there hasn't been much of a change in the service yet," Tsinas said. "It's all sort of building right now - we're in the growing process."

Murphy seemed to keep his distance from the table that night and explained that Women's Day is when he hands full control over to the female volunteers. Murphy wants to give as much liberty as he can to the volunteers to run the program.

"My eyes are much more open," Murphy said, "because of the women in this program."