Members of the UW Housestaff Association (UWHA), a union of medical residents and fellows, voiced frustrations to the UW Board of Regents (BOR) during their Wednesday meeting over the university’s refusal to engage in collective bargaining after work hours.

The union negotiates a contract with the UW every three years through a monthslong process involving several meetings, typically happening after clinical hours. This year, however, director of labor relations Banks Evans has attempted to change these times, moving them earlier in the day.

In response, UWHA delivered a letter to UW President Ana Mari Cauce outlining their opposition to these earlier meetings, centering around the fact that their work with patients would be interrupted.

“We estimate as many as 500 patients could be affected,” the letter reads. “Compromising patient care in any way is unacceptable, and UWHA has drawn a line.”

The letter also explains that patient handoffs, when a doctor leaves his post and another doctor steps in, is “one of the largest sources of medical error” and would increase if doctors were forced to attend bargaining meetings during the work day. 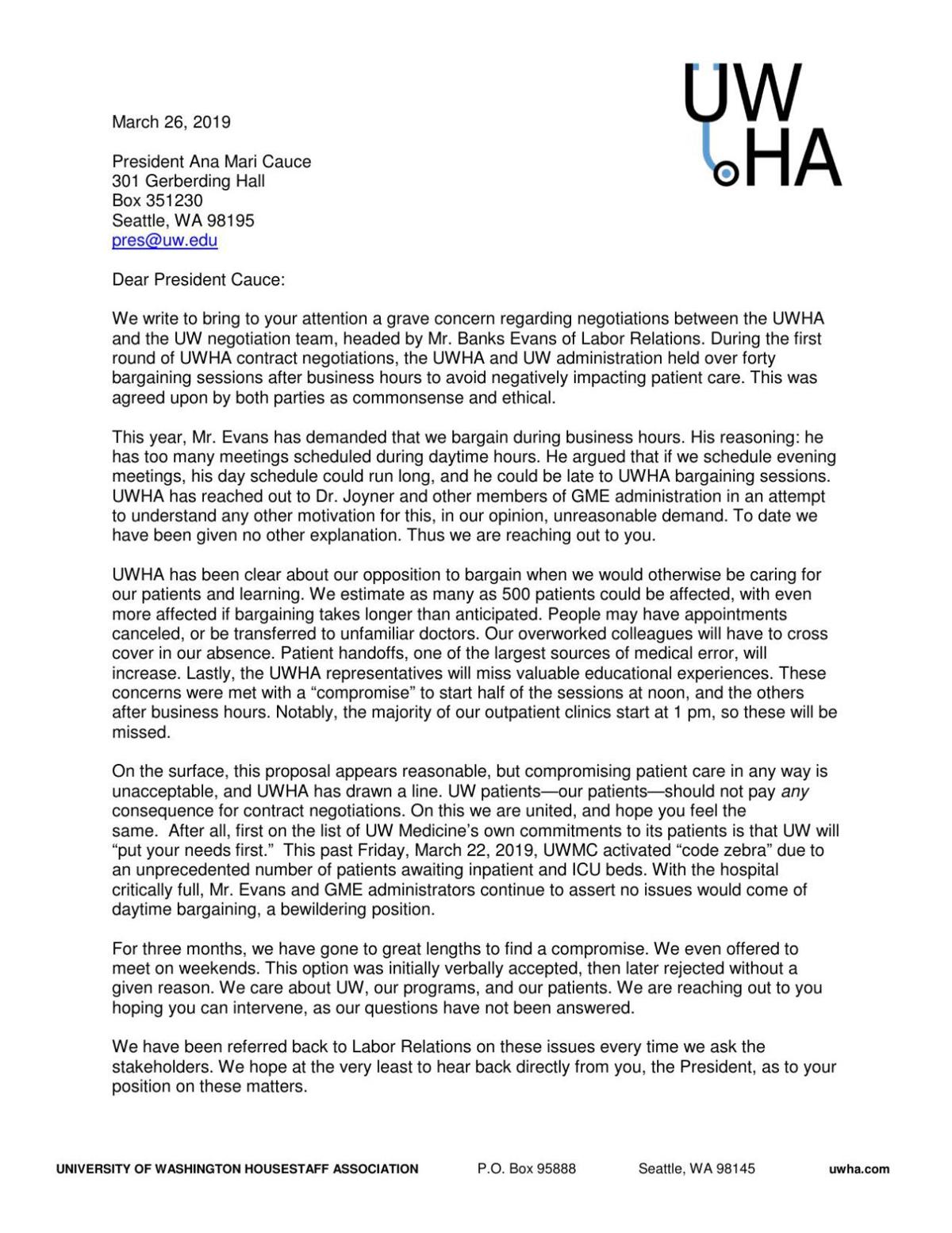 Dr. Adam Greenbaum, an oncologist at UW Medicine and a UWHA board member, explained that the tension at Wednesday’s BOR meeting was a culmination of years of struggle between the union and UW administration, which began in 2014.

“We unionized after a very nasty fight with UW,” Greenbaum said.

In a petition to the state’s Public Employment Relations Commission, the UW argued that medical fellows and residents were students, not employees, and were therefore ineligible for collective bargaining.

According to Greenbaum, this sentiment got at the heart of the issue and struck a chord with medical residents, who are often overworked.

“People don’t understand what residents are,” Greenbaum said. “We’re doctors — we aren’t students. If you get care at the UW hospital, there’s a pretty good chance that residents are taking care of you.”

The state ultimately decided that medical residents and fellows at the UW do have the right to collectively bargain. This year marks the second round of bargaining, proving difficult with the UWHA and Evans going back and forth for three months in regard to when bargaining sessions will take place.

During the meeting’s public comment period Dr. Ali Khaki, an oncology fellow, spoke about their personal experience in the hospital. He described a new patient whose lung cancer had spread to their spine. The patient, who Khaki saw on a weekly basis, didn’t speak English and needed social work assistance.

Because Khaki missed a single appointment, the patient was handed over to another doctor. As a result, the patient’s condition worsened and they were forced to undergo a spinal procedure that left them hospitalized for over a week.

“This is not an uncommon story across our clinics,” Khaki said. “We care for complex and vulnerable patients.”

Khaki stressed that the health of patients relies on continuity of care. UWHA secretary and dental resident Dr. Sehe Han echoed these sentiments, asserting that “even one absence can have a huge impact.”

Han told the BOR that she works on a team of just six people who cannot easily cover for each other. Further, she explained that her team often provides crucial dental care for patients with severe heart infections in order to avoid complications during surgery.

“These patients never miss appointments because of their schedule, and neither should I,” Han said.

In a response to the UWHA’s letter, Cauce agreed that “excellent patient care is not something we can compromise.” 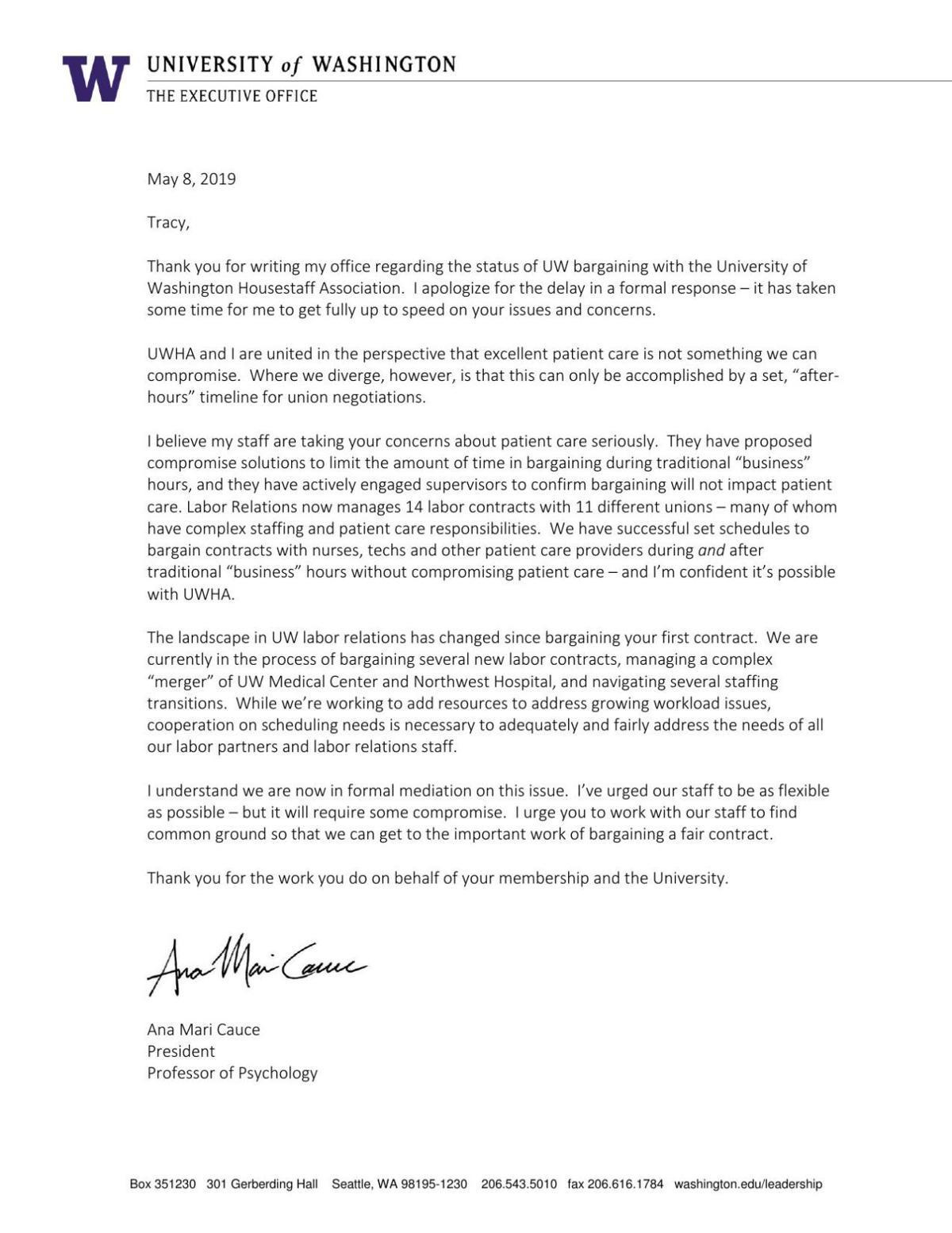 “Where we diverge, however, is that this can only be accomplished by a set, ‘after hours’ timeline for union negotiations,” Cauce wrote.

“I’ve urged our staff to be as flexible as possible — but it will require some compromise,” Cauce wrote.

According to Greenbaum, the union still hopes to work things out with the UW administration. Until then, the UWHA has filed an unfair labor practice claim with the Washington State Public Employment Relations Commission.

UWHA’s former president and rehabilitation medicine fellow Trevor Gessel left the BOR with a chilling message: Negotiating during work hours will “decrease quality of care at UW Medicine and increase amount of medical errors, for which the UW will be culpable.”