Skip to main content
You are the owner of this article.
Edit Article Add New Article
You have permission to edit this article.
Edit
News
Sports
Opinion
Arts
Specials
Pacific Wave
Multimedia
Podcasts
E-Editions
Advertise
Classifieds
Housing
Share This
1 of 13 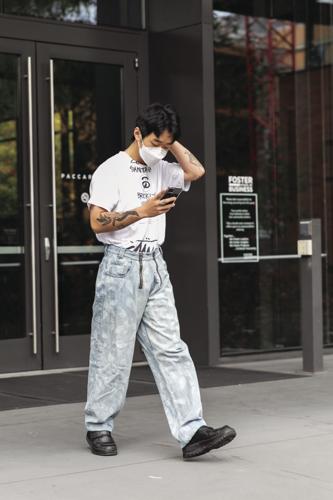 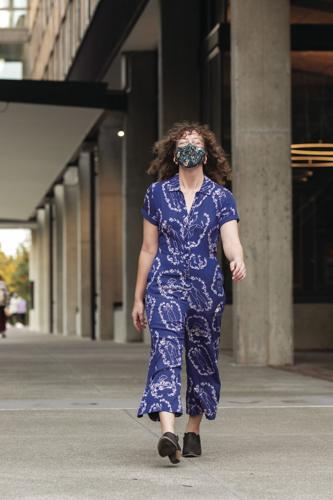 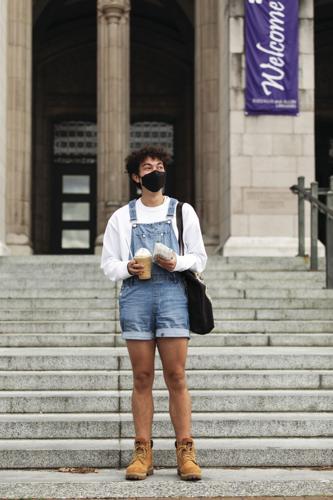 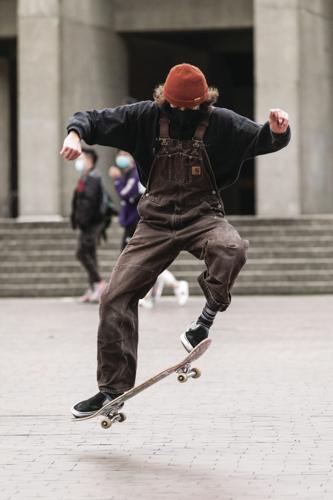 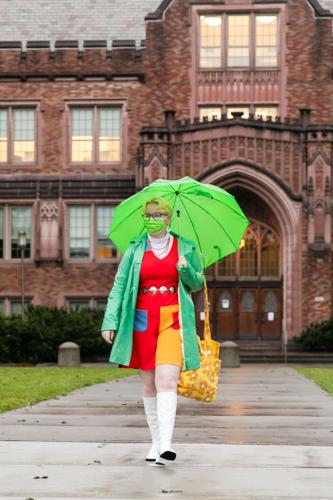 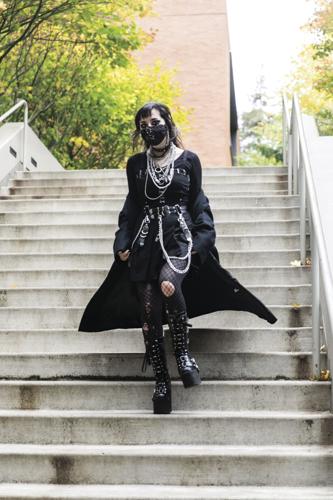 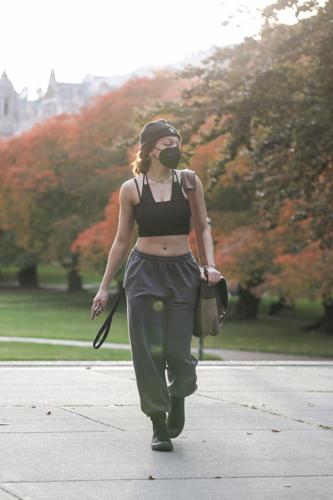 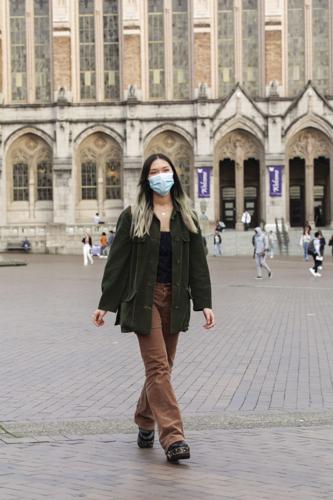 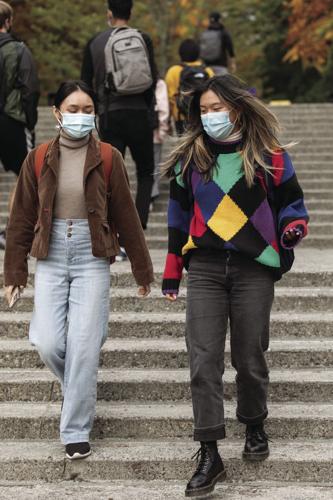 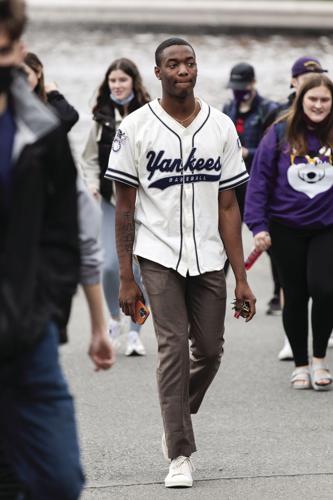 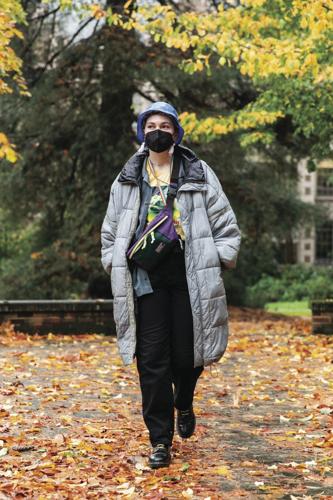 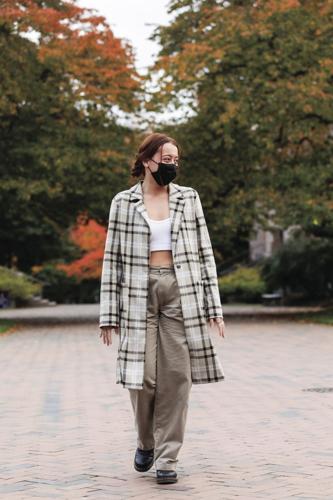 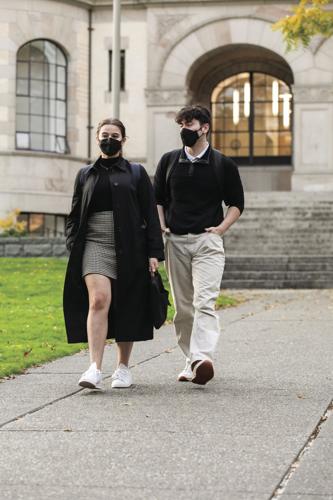 For many of us, “Zoom University” may have been the time to craft a digital persona the size of the platform’s rectangle box. Ensuring the background behind your chair was clean — even when the rest of your room wasn’t — and perfecting your fits from the chest up became staples for the brave students who chose to keep their cameras on.

Returning to in-person classes unfortunately means we are again going to be perceived by others, a personally upsetting fact seemingly only comforted by the fact that at least half my face is covered by a mask.

Still, students have returned en masse. Some are rocking new looks and some are saying goodbye to fashion fundamentals of the past like skinny jeans and bras. The past 18 months of online school and the amount of free time spent mindlessly scrolling the internet also opened opportunities for explorations of personal expression, liberating many from former rigid societal expectations of what style is.

If anything came from the year and a half of the world crumbling under our feet, we’ve had time to reevaluate what is important to us — as cheesy as it sounds. After all, as long as someone feels like their truest self, that's style.

It’s not a surprise that first-year Tate Linden was wearing his Timberland boots. They’re an everyday staple, he said.

Linden likes to go thrift shopping, and you can usually find him at Goodwill outlets because of the variety of unique pieces available.

Starting college and returning to in-person activities gave Linden more opportunities to plan fashionable outfits compared to when he did school online during the pandemic.

“It’s fun to get to dress up and have stuff to do finally,” Linden said.

First-year An-Doan Nguyen sees her style as a type of self-expression. Finding her own fashion sense and picking outfits that she likes helps her gain confidence, she said.

Two pieces from Nguyen’s outfit have special meaning: her aunt purchased the earrings on a trip to Singapore, and her jacket used to belong to her mom. While many clothes and accessories are mass-produced, items like Nguyen’s earrings and jacket have a pricelessness due to the story and familial connection behind them.

Jiang likes to shop at thrift stores. Her colorful sweater was from Red Light Vintage on the Ave and her undershirt was from Crossroads Trading Co.

Thriftiness and creativity are central to third-year Kaitlyn Milliken’s style. She prides herself on seeking out low-cost pieces, a practice that benefits the environment and her wallet. She found her pants in the $1 bins at a thrift store and borrowed the shirt from her roommate.

“I like switching between more feminine and more masculine things,” Milliken said.

Walk around campus and you might pass by one of the many skaters that take over Red Square on the rare cloudless day. First-year Sebastian Kuhn, dressed in his Carhartt overalls, may be one of them.

From Vans to Thrasher, certain brands have long been associated with the skateboarder and streetwear aesthetic. Many avid skateboarders choose clothes that are comfortable and practical and shoes that are light on the feet.

“Most of my fashion comes from my sister,” Kuhn said. “She’s really into it and gives me all [of] her old clothes that she doesn’t like.”

His ring was from his sister and his sweatshirt was from his grandma, while his overalls were thrifted, contributing to a personal look Kuhn labels as “skateboard-y.”

Like many UW students, first-year Anna Tsou purchases most of her clothes from thrift stores. She supports second-hand shopping because it’s better for the environment, she said.

However, not all of her clothes are bought from a store.

Tsou’s jacket was once worn by her mom when she was her age, giving it some sentimental value.

“I just kinda wear clothes that I find cute to make me feel better,” Tsou said. “I just do it for myself.”

First-year Indu Natarajan’s pants were originally her dad’s pants; her bag was originally owned by her mom.

The best way to describe her style? Lots of hand-me-downs, she said — and thrifting.

“Whenever I’m out with friends I look around the area for small shops or antique places,” Natarajan said. “I try to limit my closet to things that I think could work together well so that putting an outfit together isn’t too difficult.”

For graduate student Wren Thompson, she and fashion have a “love-hate relationship.”

Growing up, Thompson says she was rural and “hippy-ish.” Then, she moved to New York.

Over time, Thompson ended up cultivating a personal style that seems to exist adjacent to the crossroads of casual and business casual — a separate, unique fashion group, she said.

Alex Gonzalez, also a second-year student, likes to alternate between academic and streetwear.

“It’s a nice balance between being a student and hanging out with friends,” he said.

Companies like H&M and Uniqlo provide Dubreuil with much of the basics, but you can also find him shopping at thrift stores like Crossroads Trading Co.

His style has evolved — he no longer stresses about what to wear in advance, attributing much of his style to his confidence.

“Half the battle is putting on the outfit and walking outside the door,” Dubreuil said. “I used to put a lot of thought into what I wore. Now, I wake up. Fit.”

Layered outfits of black clothing and a multitude of accessories — from chains and spikes to fishnets and leather — is how you’ll find first-year Jade Dickinson walking around campus.

Still, labeling her style is something that’s hard to do, Dickinson said.

Influenced by the traditional goth style of the 1980s, as well as taking inspiration from the aesthetics of her favorite bands such as Depeche Mode, the Cure, and Vision Video, she ultimately wears what makes her happy.

“I don’t dress for anyone else,” Dickinson said. “And dressing the way I do helps my confidence and social anxiety.”

Valley of Roses Boutique on the Ave, Depop, and Tripp NYC are just a few of the places that supply Dickinson’s growing wardrobe. She alters some pieces, like her mask adorned with safety pins and her ripped tights.

“I fully believe in modifying your clothing however you want, and in some ways I like it more than just buying a piece of clothing,” Dickinson said. “Buying second-hand clothes and modifying items is not only good for the environment, but so much more fulfilling as someone who loves fashion.”

First-year John Song describes his style as a mix between casual and streetwear. He likes the brand The Soloist by Japanese designer ​​Takahiro Miyashita; Song likes to buy expensive clothing items, but the prices rack up. He grew up in Korea where he spent a lot of time going to thrift stores.

“I just kind of wear what makes me happy,” first-year Lillian Holombo said. “I’ve been told I dress color blocky, kind of like an old man.”

Holombo likes to shop at Levi’s for pants, as they are seemingly the only brand that fits them well. They also like to thrift shop at Goodwill and Crossroads Trading Co.

The best way to describe first-year Sarah Elkan’s style is as “vintage rodeo clown,” they said.

“I like to dress fun,” Elkan said. “If it makes me laugh, then I wanna wear it.”

Walk around campus and you’ll see the students who find what works for them. Thrift shopping, borrowing from friends and family members, and getting inspiration from influencers are just a few of the ways students are crafting their own unique style.

Thrifted and gifted: A look at campus looks

Wading through the endless stream of ‘perfect’ skincare products