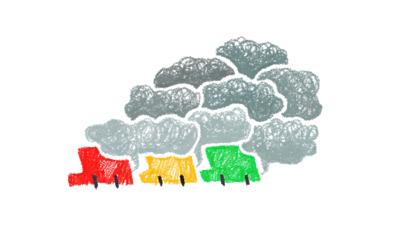 One of the biggest health challenges of our time is one we can’t even see. It can impact the brain, lungs, and heart, among many other parts of our bodies. It may be causing disorganization of cerebral folds in developing brains, limiting the neurogenesis of nervous system cells, harming long-term cardiovascular health, and ultimately lowering the quality and length of life.

The culprit is in the air.

Diesel exhaust, industrial chemicals, and smoke all contribute to air pollution, which is a mixture of gases, metals, organic compounds, and solid particles that clog the atmosphere. UW researchers are finding that air pollution can harm the human body in a wide variety of ways, possibly even causing autism and cardiovascular disease.

“It’s a complex mixture … and it’s unclear what part of it is toxic or if it’s an actually interactive toxicity among all these different components,” Dr. Toby Cole, a research scientist at the UW Center on Human Development and Disability, said.

The main problem is with particulate matter, particularly with particles less than 2.5 micrometers in diameter (PM2.5). Less than one-thirtieth the width of a human hair, particles of this size are invisible to the human eye and able to travel deeper into the body than larger particles.

“The really small particles are more toxic,” Cole said. “The ultrafine particles are the ones that you're most concerned about because they're … small enough that they can get into smaller spaces … they can actually get into the brain.”

Cole is a senior author of a 2019 study from the UW department of environmental and occupational health sciences (DEOHS) that found a potential mechanism behind the link between air pollution exposure during development and autism spectrum disorder.

The study was built upon previous research by Yu-Chi Chang, a former UW doctoral student, which found a correlation between exposure to high levels of PM2.5 from diesel exhaust and behaviors typical of autism in mice.

The potential process by which particulate matter from diesel exhaust could enact change on the structure of the brain starts with an increase in an inflammatory protein in the brain called interleukin-6, or IL-6. The increase in IL-6 triggers a pathway that eventually leads to an decrease in the reelin protein, which plays an important role in early brain development.

More specifically, reelin controls the movement and positioning of neurons. There is often an abnormal expression of reelin in people with autism spectrum disorder.

Air pollutants can also have adverse effects on heart health.

The Multi-Ethnic Study of Atherosclerosis and Air Pollution at the UW (MESA Air) is approaching its 20th year. Participants of the study were recruited from 2000 to 2002 without any cardiovascular disease and have been followed since to explore the long-term effects of air pollutant exposure on cardiovascular health.

“We now have much stronger reasons to believe that particulate matter, air pollution — they’re causing systemic diseases such as atherosclerosis, which is the underlying disease process, [the] hardening of the arteries which leads to heart attack and strokes,” Dr. Joel Kaufman, principal investigator of the MESA Air study and professor at the UW, said. “That’s where the extra mortality effect of air pollution comes from.”

The processes by which the adverse effects on the heart come about are likely similar to those found in the link between air pollution and autism. According to Kaufman, the entrance of particulate matter into the lungs provides a trigger for an inflammatory effect that spreads throughout the body. This accelerates the process of atherosclerosis — the buildup of cholesterol and plaque in the arteries — which is the most common contributor to cardiovascular disease.

The increase in atherosclerosis may also be the result of a stress response by the sympathetic nervous system. This leads to an increase in blood pressure along with other processes that can lead to vascular damage.

Inflammation and the stimulation of the sympathetic nervous system likely both play a role in the mechanism which brings about the adverse effects of air pollutants.

“We haven’t figured out which of those two processes is the most important,” Kaufman said.

Even as MESA Air approaches the end of its second decade, there are still questions left to be answered.

The autism study used concentrated diesel exhaust generated in lab, while MESA Air follows human subjects exposed to a variety of pollutants in their everyday lives, including but not limited to diesel exhaust.

“It’s super important to understand if there are certain parts of air pollution that are most responsible for these effects because if we knew that it was a certain part of pollution, we could target our prevention efforts on that,” Kaufman said.

Figuring that out will be an important aspect to the continuing research through MESA Air, as it was — and still is — in Cole’s research. Studies like these play an important role in the regulations controlling the amount of fine particulate matter we breathe in every day and the prevention approaches that protect us.

“I wanted to put information out there … that can be used by the regulatory bodies to make more informed decisions about … what's an appropriate level of exposure for diesel exhaust and traffic related air pollution,” Cole said about the research he is involved in.

The current presidential administration has taken action to deregulate air pollution and dissolve committees in the EPA, including the Particulate Matter Review Panel which Kaufman was a part of. However, some scientists are staying positive.

Dan Jaffe, a professor of environmental chemistry at the UW, wants people to recognize that they still have the ability to enact change.

“There was a big battle over the coal trains shipping coal from Wyoming to China [and] there were two ports proposed in Washington state to bring this coal to market,” Jaffe said. “So we got involved to do research on exposure [to coal dust] of people living near the rail lines.”

The ports were not approved as Washington state turned them down.

“I don’t want to claim that it was my research that stopped them,” Jaffe said. “I’d like to think that I had a tiny part in a big puzzle.”