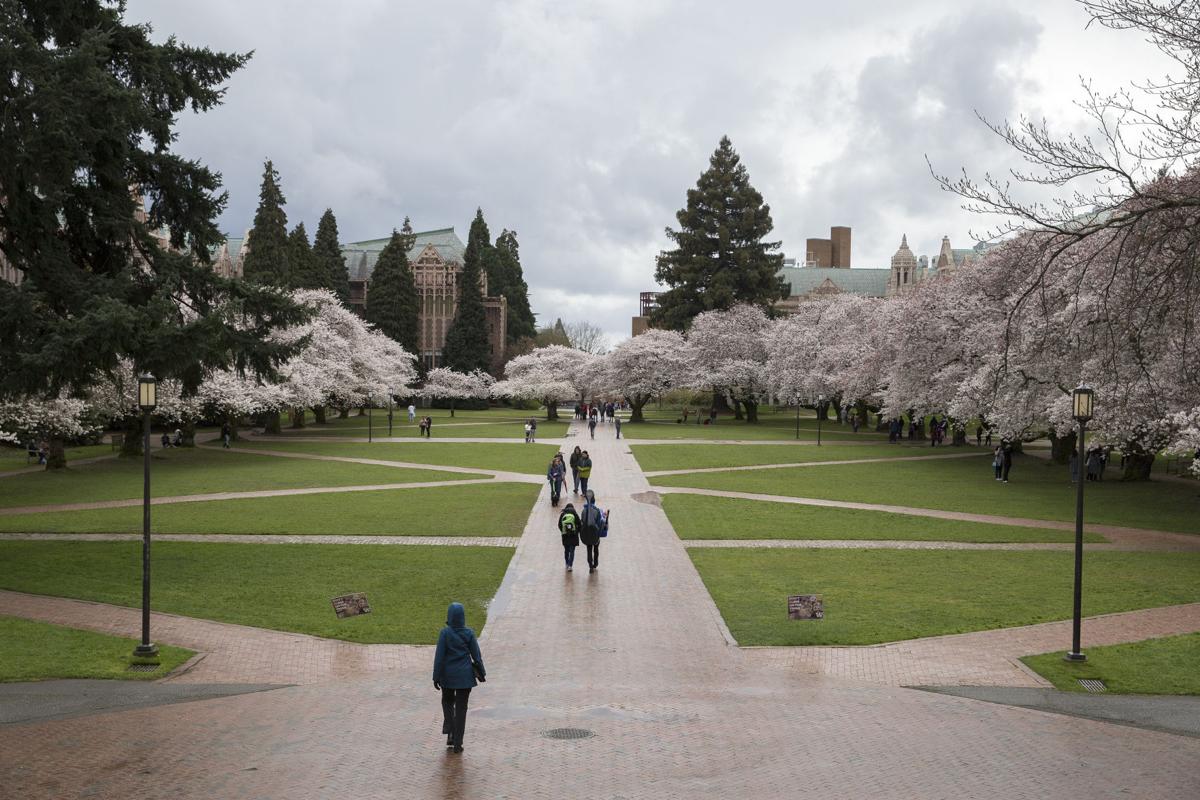 The quad’s cherry blossoms are in full bloom. These trees are almost 90 years old and have a max lifespan of about 100 years, so UW arborists are searching for a solution for what to do when they start dying. 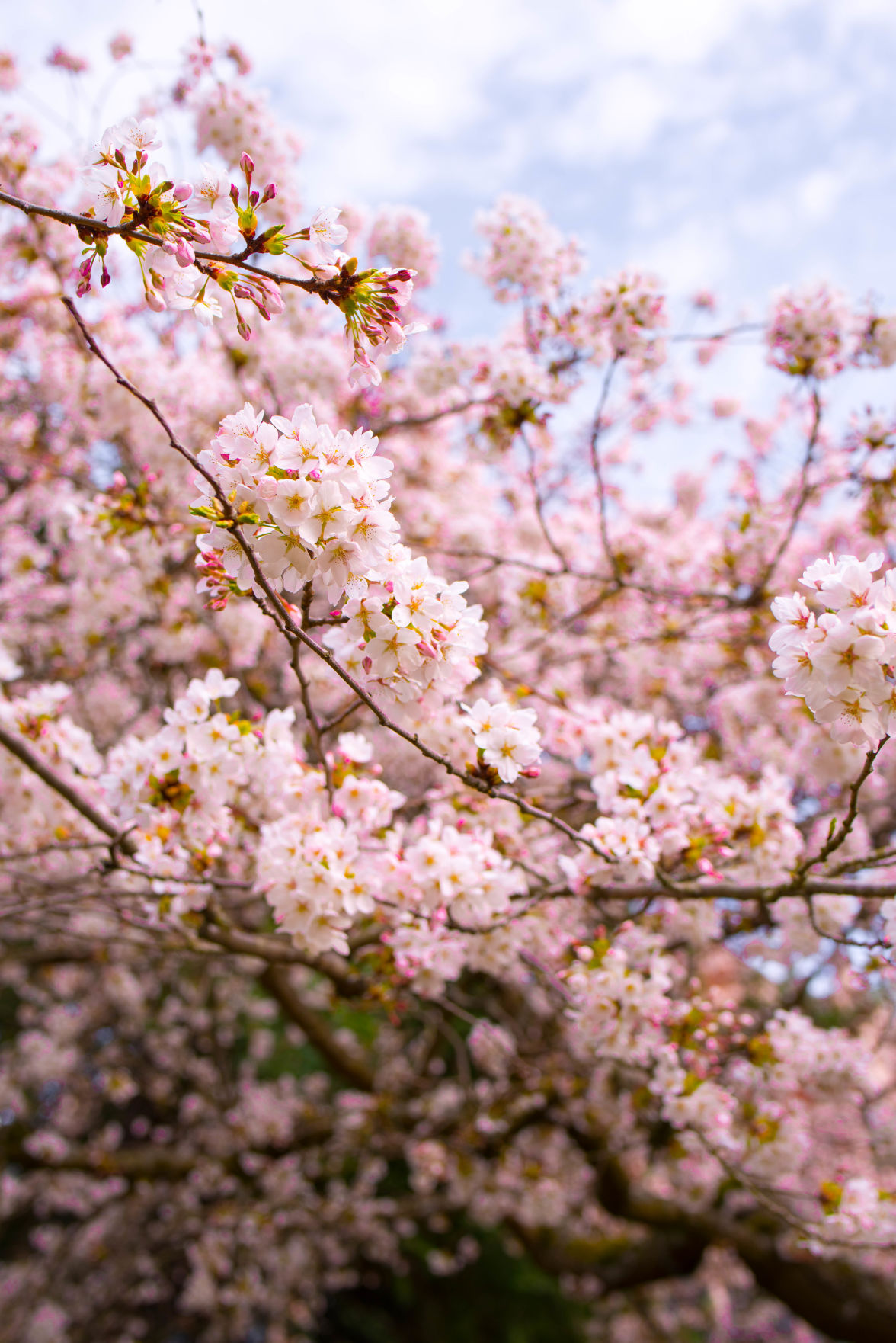 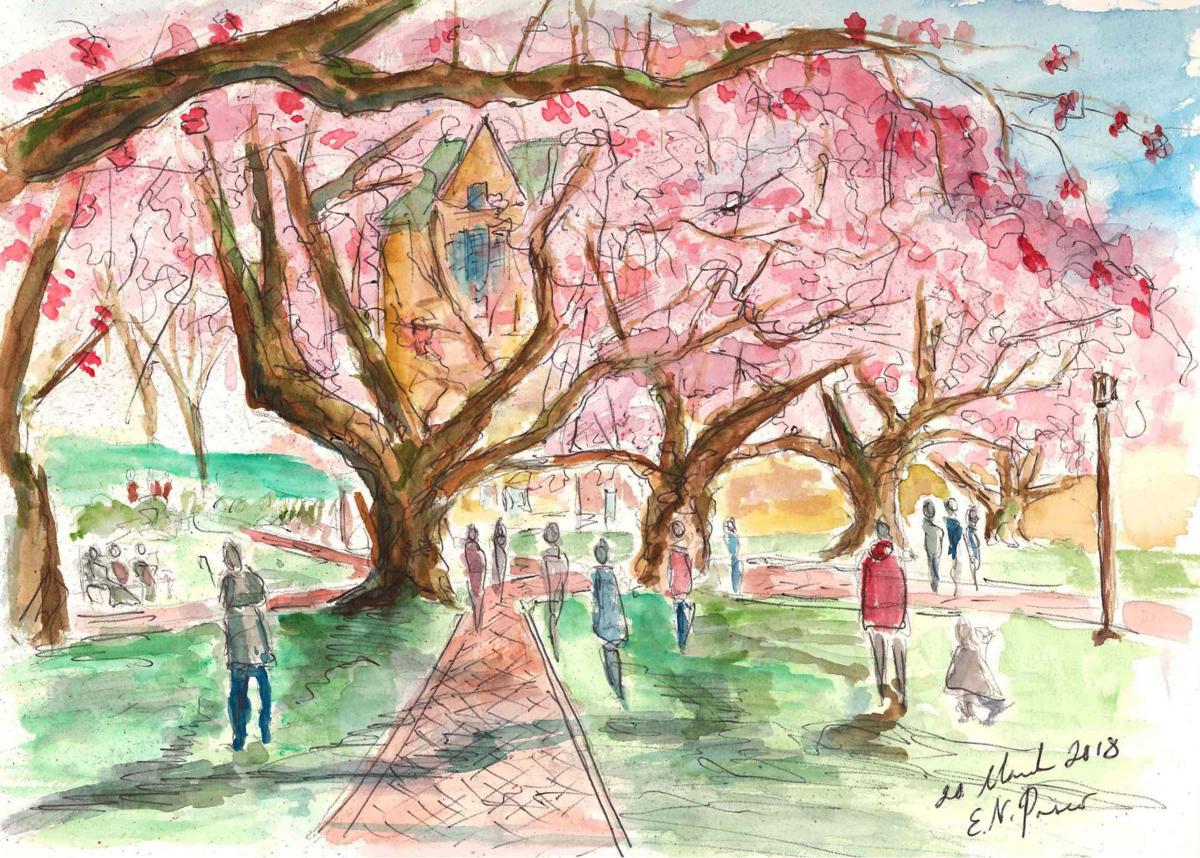 An illustration of the quad with people looking at the cherry blossoms.

Chris Holmer has worked with the UW’s cherry trees for 18 years. After transferring to UW’s forestry program, he started working part time as a gardner to earn extra money. Eventually, he was offered a full time job and now works as the gardner lead for central campus, which includes areas near Denny Hall, Suzzallo Library, the HUB, and the 30 cherry trees that stand in the Quad today.

As Holmer walks around the Quad with me, he points out imperfections on the trees that no one but him would notice: limbs that need to be cut, fungi growing on trunks, and a smaller tree near the main pathway that will be removed in the next year. Years of working with the same trees has given him an intimate working knowledge of their health, lifespan, and care.

Spring in Seattle can be unpredictable, but without fail, every March around finals week, the trees around the perimeter of the Quad blossom into clouds of pink. It rained early that day, scaring away the tourists who normally crowd the area with their dogs, children, and shuttering cameras, all clambering to get as close as they can to the small, delicate blossoms. Holmer estimated that on a sunny day, thousands of people walk through the area.

The trees are Yoshino cherry trees, also known as the Japanese flowering cherry, famous for the vibrancy of their blossoms. In 1912, Tokyo Mayor Yukio Ozaki donated the cherry trees to the United States in a gesture of friendship. Trees were distributed all around the country, with 35 being planted in the Washington Park Arboretum and 31 eventually being relocated on the perimeter of the quad where they stand today as one of the UW’s most iconic views.

The trees, now nearing 90 years old, have been a staple on the UW’s campus for decades. The typical lifespan for trees of this type is 85 to 100, raising the question of what will happen when the current trees die and need to be removed.

Students may be familiar with the campus rumor that said there is a secret location where the backup cherry trees have been stored, ready to be swapped out once the originals die.

This is partially true. The gift of the class of 1959 called for the “continual care and upkeep of the Liberal Arts Quadrangle, with a primary focus on the maintenance of the Yoshino Cherry Trees.”

Some of that money was used to pay for the grafting of the original trees in order to grow new trees that could potentially replace the originals after they die and need to be removed. Grafting is a technique where the tissues of plants are joined so as to continue their growth together, with the success of this joining dependent on the vascular tissue growing together. The technique is extremely common in agriculture, with most apple trees in modern orchards grafted onto dwarf or semi-dwarf trees at high density to provide higher quality fruit.

Grafted trees are essentially the genetic identical of the original tree, so if successful, the trees would maintain the same iconic appearance as the current ones. It turns out that these trees will not be used in the Quad, but have been planted in other areas of the campus, several in the grass area near Memorial Way and Parrington Hall.

The question still remains of what to do when the original trees die; no one is sure how much longer they will live and what is the best way to replace them.

All 30 trees currently have brown rot, a type of wood-decay fungus that digests moist wood, causing it to decay. The fungi breaks down the cellulose that form the wood structure and can diffuse rapidly through the wood. As a result, the woods shrinks, discolors, and cracks. The excessive moisture we experience during the Pacific Northwest winters helps the rot spread.

The trees are also susceptible to a pest called cherry bark tortrix. They lay eggs on the bark of the tree, often near wounded areas of the tree that have been pruned or infected with rot. The larvae feed beneath the bark, burrowing inside the tree creating tunnels that loosen and crack the bark. Heavy infestations can potentially kill limbs or entire trees.

“When I started 18 years ago, everyone said the trees would be dead within 10 years, but they’re still here,” Holmer said. “Considering how old these trees are, they are remarkably healthy, even with the issues.”

Holmer has a yearly maintenance schedule that includes removing dead wood and limbs, but the trees still show signs of stress, some having fungal growth indicating extensive rot.

The Quad itself is also in desperate need of updating. Roots from the trees push up pathways, making the bricks loose. Drainage is also a huge issue, both for the health of the trees and from a usage standpoint.

“The irrigation is original, and it all needs to be redone,” Holmer said, pointing out different swampy areas of grass oversaturated with water. “Ideally, if we redid the area and replanted, the trees would sit on a mound to keep the roots drier.”

UW Urban Forest Specialist Sara Shores echoed Holmer, saying the trees need to be changed within 30 years, but the Quad needs to be done alongside the trees.

“It wouldn’t make sense to replace the trees with new ones until the entire quad has been redone and the drainage issues are addressed, which would likely cost millions,” Holmer said.

Although the trees will likely survive another decade or so, it’s clear there is no replacement plan when the cherry blossoms start to die one-by-one around the quad. Without action, the blossoms that students and the Seattle community have grown to know and love over the last 90 years will fade into the past.