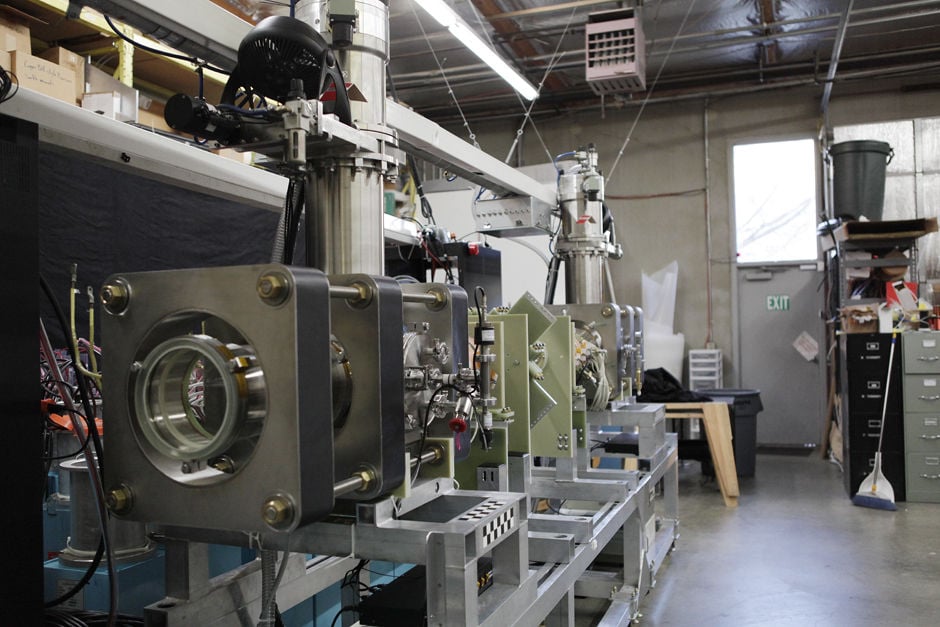 The fusion engine, currently sitting in a lab in Redmond, Wash., has the ability to convert fusion energy directly into electricity. 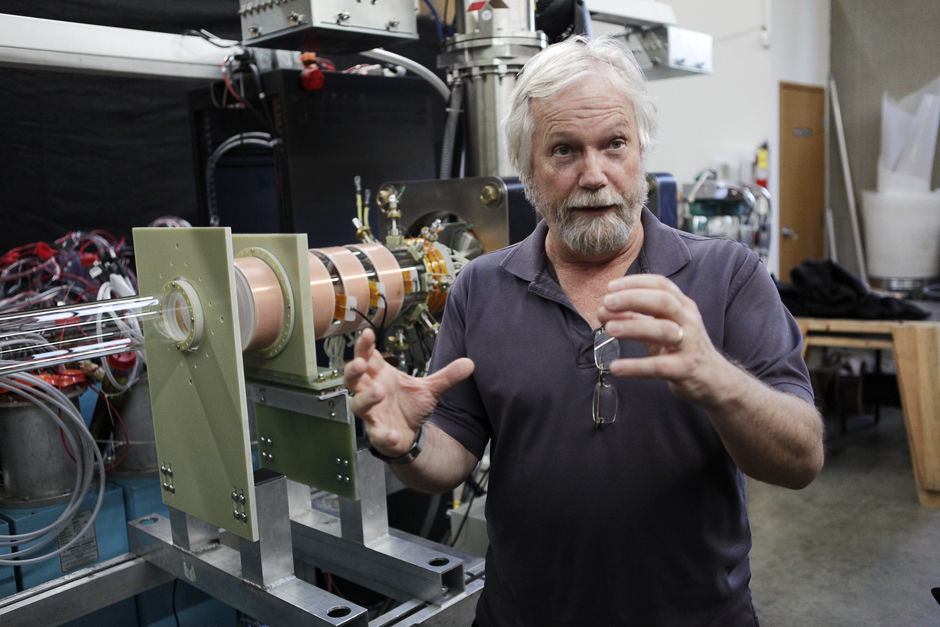 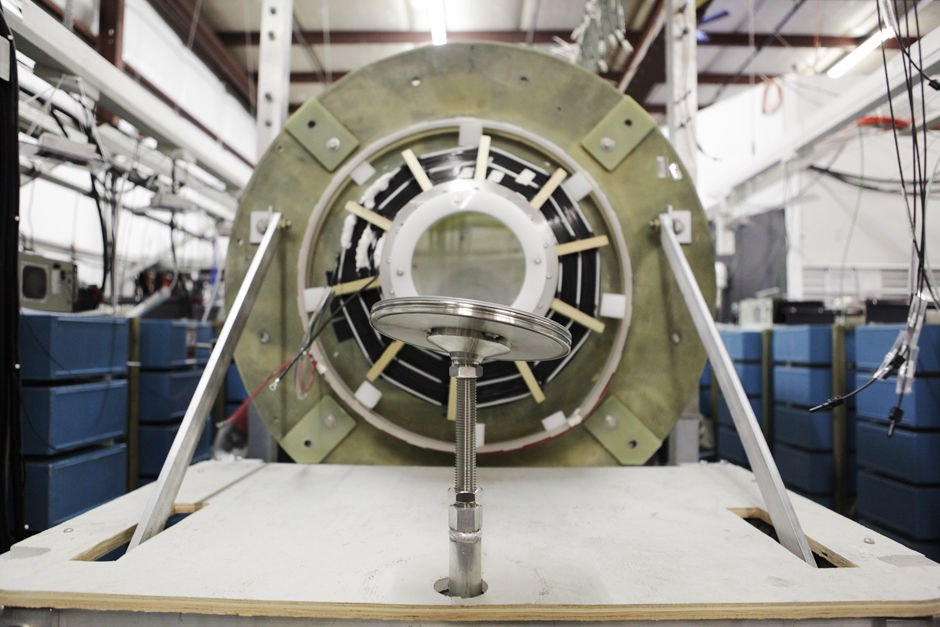 A chamber located in the Redmond, Wash., laboratory is used to test different material’s heat capacities for use in the fusion space engine.

The fusion engine, currently sitting in a lab in Redmond, Wash., has the ability to convert fusion energy directly into electricity.

A chamber located in the Redmond, Wash., laboratory is used to test different material’s heat capacities for use in the fusion space engine.

In the ever expansive race to find a superior alternative fuel, fusion energy has been eluding scientists for decades. But some researchers at the UW are closing in on what could be a more accessible method for fusion power.

Fumio Ohuchi, professor and associate chair of material science and engineering, and John Slough, associate research professor and director of research at MSNW, are part of the team working at the UW and the MSNW fusion lab in Redmond, Wash., building what they call a fusion engine — with a design different from a typical fusion reactor.

The fusion engine operates similar to a car engine: The plasmas (hot, ionized gases) are made outside the cylinder and, much like with a fuel injector, the two plasmas are then forced to collide using pulsing, cylindrical magnets, similar to a piston compression in a car. Using a magnetic piston prevents the contact of the hot gases with the chamber wall, allowing for the much higher temperatures needed for fusion.

What’s different about this project is its size and its ability to convert fusion energy directly to electricity like a motor engine, which would make it the most efficient source of energy.

For example, the fusion engine could be considerably more efficient than other alternative energy sources like solar cells. Ohuchi said that while a solar cell cycle produces 1 electron volt (eV) of energy, the fusion engine will be able to produce a million eV in a single cycle.

A fusion reaction releases a remarkable amount of energy by combining two hydrogen isotopes. If people can harness fusion power, it would mean almost limitless, clean-burning fuel, eliminating our need for things like coal, oil, and natural gas, which account for more than 70 percent of U.S. electricity generation.

“Our approach has been, ‘What would be the ideal way you’d want a new energy source to be?’” Slough said. “[We started] there, and then asked if there is any physics that would allow that to happen.”

“If you build this in strategic places you could cut down on the amount of energy it takes to transport,” said DuWayne Smith, Ohuchi’s graduate student.

On paper, everything about fusion power makes sense. But containing the high temperatures needed to combine the atoms together is more complicated. The fusion engine would require the materials to get an intense exposure to high temperatures, but only briefly, unlike larger projects such as the International Thermonuclear Experimental Reactor (ITER) in Southern France.

“So the containment vessel became the issue,” Slough said. “The science is sound; it’s the engineering that’s a disaster … projects like ITER in Southern France cost $20 billion and that’s mostly for engineering. We pretty much know the physics that has to occur.”

Fusion energy has been a holy grail among scientists for decades. Researchers started experimenting with the concept in the 1940s and 50s, hoping to improve things like space travel and clean energy. Nowadays, the U.S. government’s budget for this type of fusion research is around $400 million. Slough says $20 million could fund this project.

“The reason for that is not because we’re magical, but because we’re doing it on a much smaller scale,” Slough said. “We only need and want this reaction for a brief time. If we were trying to sustain it longer, we’d run into problems like they have. Worldwide there are 2 billion people without electricity, and they’ll never get power if the only kind of alternative they have is expensive and sophisticated.”

Since the fusion engine wouldn’t require as much transportation of energy, it could be installed as a standalone system, requiring only water and lithium to run. Ohuchi cites that it “would take a stadium of coal” to yield the same amount of energy. In addition to placing power where people use it, the system could serve as an alternative form of rocket fuel. MSNW and the UW’s Plasma Dynamics Laboratory are collaborating on a version of a fusion engine appropriate for space propulsion funded by the NASA Institute for Advanced Concepts.

“We’ve gone about as far as we can go with the chemical rocket engine,” Slough said. “And at NASA it’s very mission specific; they know that we’re not going to get there if we don’t do this. Here in the U.S. we have lights; we’re content with the way things are. But at NASA they’re not, because now they’re kind of stuck.”

Although it may still be another 20 to 30 years before fusion energy is commercially available, Ohuchi says it could create the option for a 30- to 90-day trip to Mars. But right now they’re working on assembling more funding and a team.

“[Slough] started in aeronautics and astronautics and the plasma laboratory,” Ohuchi said. “Then I came in as the material scientist, then electrical engineering [came in], and so on. The success will be in building this with all these different parts from the UW.”