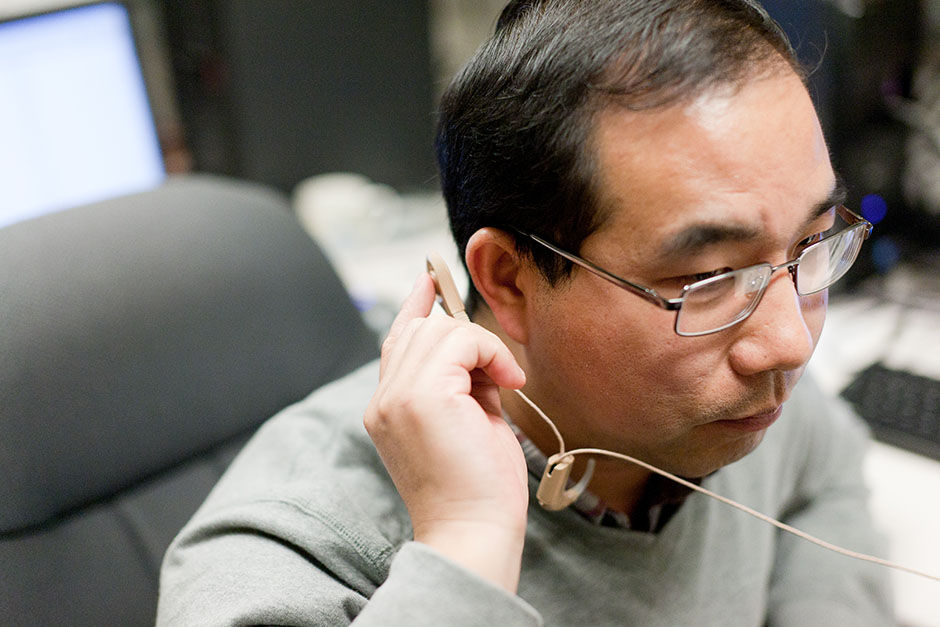 Kaibao Nie, a researcher at the Bloedel Hearing Research Center, demonstrates where the external portion of the cochlear implant attaches to subjects during testing. 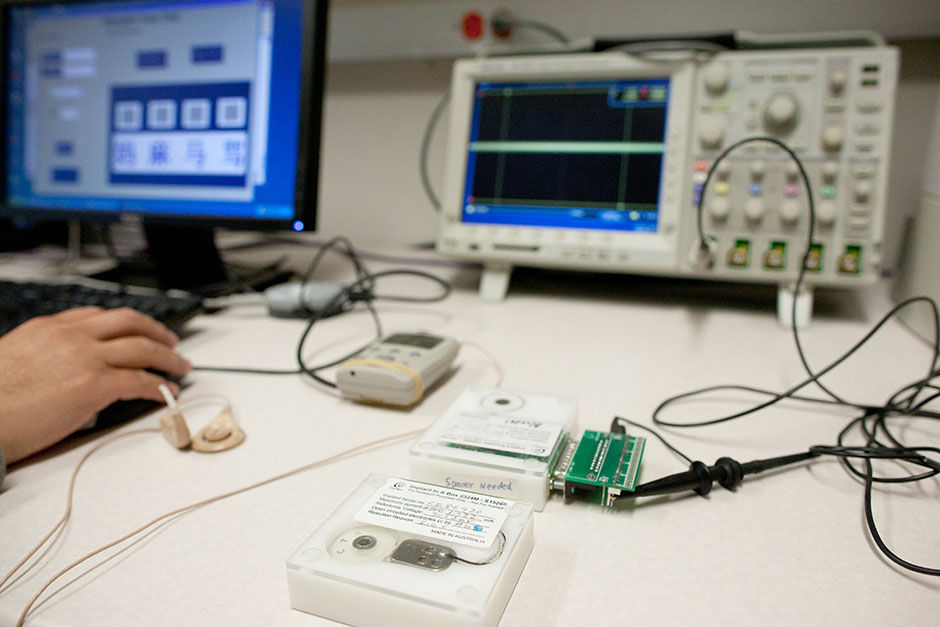 The internal and external parts of a cochlear implant (front) and equipment (background) are used in testing subjects’ ability to discern different sounds.

Kaibao Nie, a researcher at the Bloedel Hearing Research Center, demonstrates where the external portion of the cochlear implant attaches to subjects during testing.

The internal and external parts of a cochlear implant (front) and equipment (background) are used in testing subjects’ ability to discern different sounds.

Without the different changes in tone, the song “Scarborough Fair” by Simon and Garfunkel would sound quite different. However, that’s a problem that cochlear implant users deal with every day. Now, a team of UW scientists is aiming to change that by addressing the way cochlear implants process sound.

Researchers from the Virginia Merrill Bloedel Hearing Research Center (VMBHRC) and the UW electrical engineering department are working on modifying the speech processor on cochlear implants to better filter the sound for the user.

“[Cochlear implant users] cannot get some details in normal sound,” said Kaibao Nie, a researcher who works with the VMBHRC. “They don’t get normal pitch perception like the tonal change … because of some issues in the current signal processing for cochlear implants.”

Invented in the 1950s, cochlear implants provide those who are profoundly deaf or have severe hearing impairments with a sense of sound through electric stimulations to the inner ear. However, due to the implants, the brain then processes less sound information, so cochlear implant users experience a quality of sound much coarser than those without hearing impairments.

According to Jay Rubinstein, VMBHRC director and a researcher working on cochlear implants, an implanted ear has 22 electrodes which send impulses to the nerves in the brain — much less than the 1,200 inner hair cells in a natural ear.

“That’s a big difference, and that’s assuming the electrodes worked as well as the inner hair cells do, which they don’t,” said Rubinstein.

While current cochlear implant technology is sufficient for understanding speech, qualities like pitch and tonal change don’t come through. According to the researchers, these are important qualities when trying to listen to music or languages that rely on intonation, such as Mandarin or Thai.

Les Atlas, the lead author of the study and a UW professor of electrical engineering, used an analogy about playing the piano: For those without hearing impairments, hearing music or speech is like “playing a piano with single fingers.”

“But with the resolution or depleted information you get from the electrical information, it’s like playing piano with your forearms: You can get the rhythm of the music, but you can’t really hear the tune,” Atlas said.

According to Rubinstein, the current technology takes code based on a fixed filter of the harmonics of the incoming sound and processes it for the implant wearer. Harmonics, or the component frequency that is a multiple of the lowest frequency in a wave, ranges from 200 hertz to over 500 hertz. The researchers aim to code the processor in real time to carefully follow the sound and identify the first eight harmonics in order to better adapt it. Depending on the fundamental or lowest frequency of the sound, subsequent harmonics are much easier to discern.

Atlas said they haven’t quite achieved the ideal form of the cochlear implants, but they have made significant strides in that direction.

“In terms of using the piano as an analogy, we haven’t made it like a single finger, but the information people get is like taking the piano keys and pushing them up and down very fast,” Atlas said. “It turns out those rates are the rates of pitch for most musical instruments and speech.”

In order to test the new programming, the researchers placed cochlear implant users in a soundproof room where they could identify which musical instruments they are hearing. Although the study works with a small test group, initial testing has shown an average of 15 percent increase in their eight subjects — a great sign for cochlear implant wearers to begin with, Rubinstein said.

“This is immediate, and generally when we see this kind of improvement, we expect that over time the improvement will be even bigger,” Rubinstein said. “That’s why it’s so important to us to get people using it chronically … their brain will learn how to use it better, and the results should be even better than what we’ve seen.”

There’s not yet an estimate for when their subjects will be able to walk out of the lab with it, as the recently improved implant only functions under very specifically designed experiments. But the implant, which shows promise for the roughly 300,000 people worldwide who have cochlear implants, has a personal stake for Atlas, who experiences hearing loss himself. Like his father and grandfather, Atlas’ hearing began to decline later in his life.

“The number of people who have hearing loss is growing, and there are probably a lot of reasons for that — more noise exposure and older age — but it really is an epidemic,” Atlas said. “For those who can’t learn sign language, it can be very debilitating. When I imagine this situation for the millions of people with hearing loss, it’s really an isolating problem.”