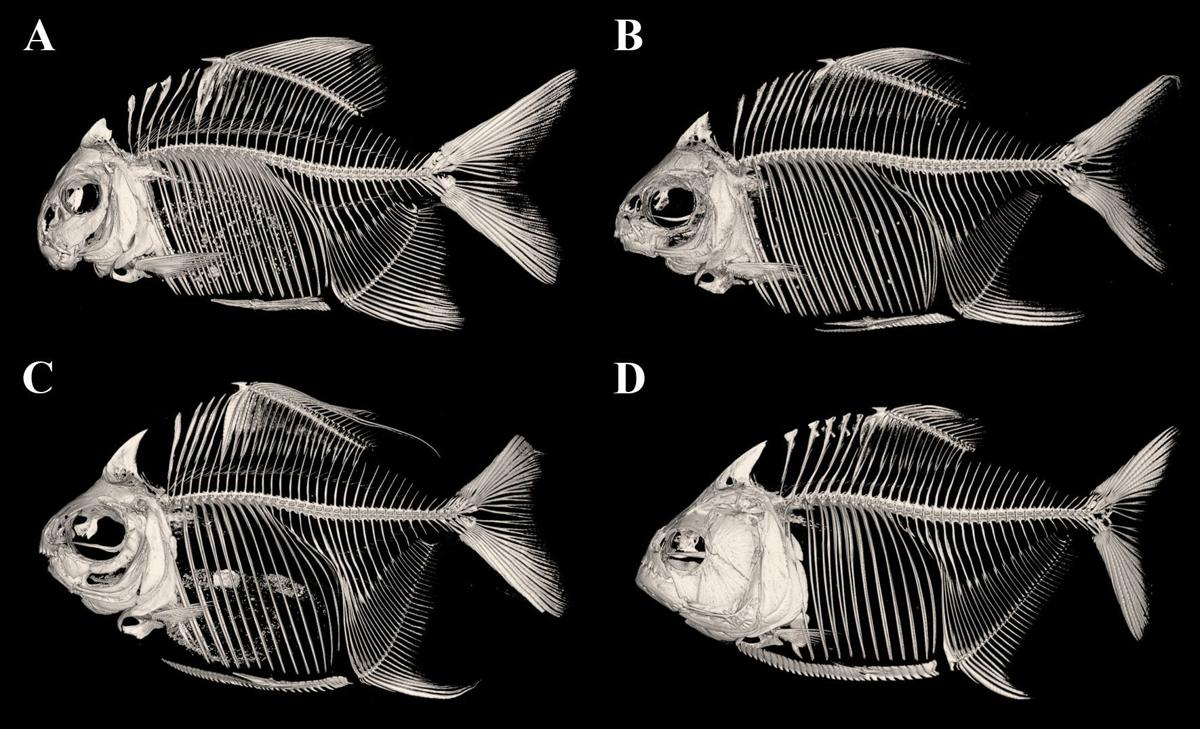 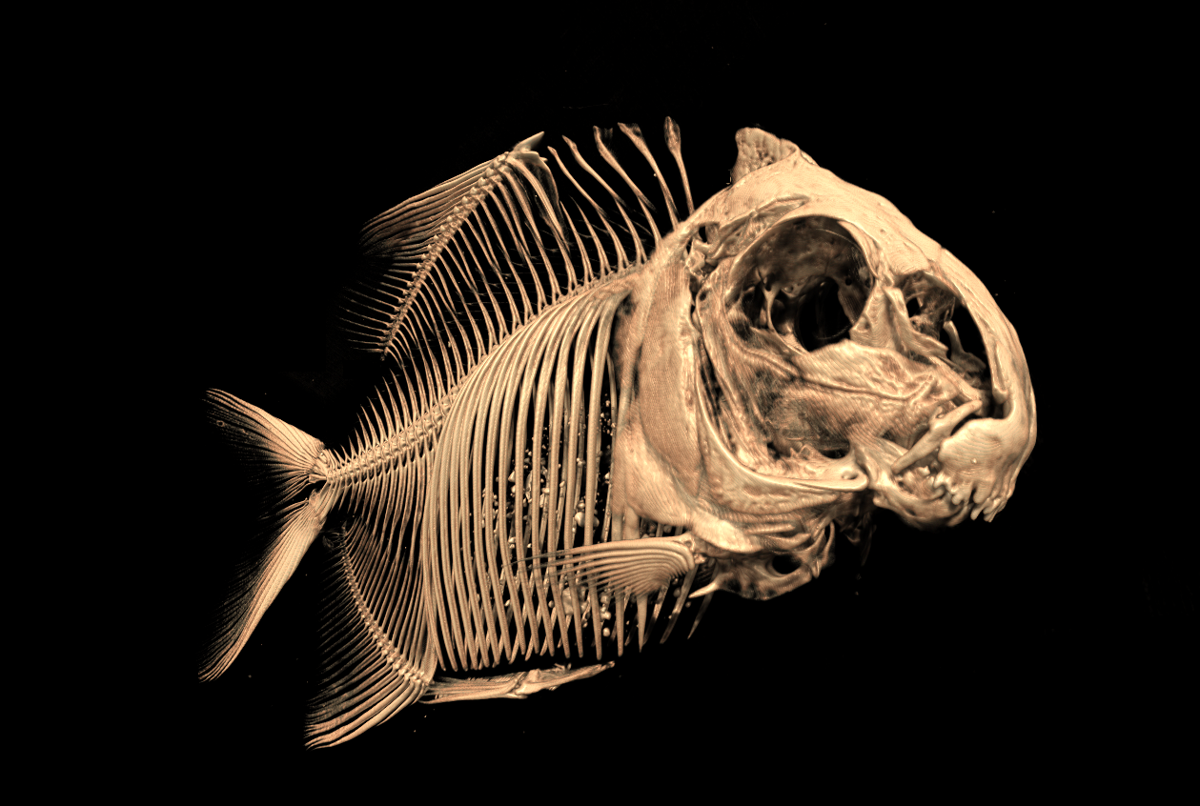 A scan of the pacu skeleton. 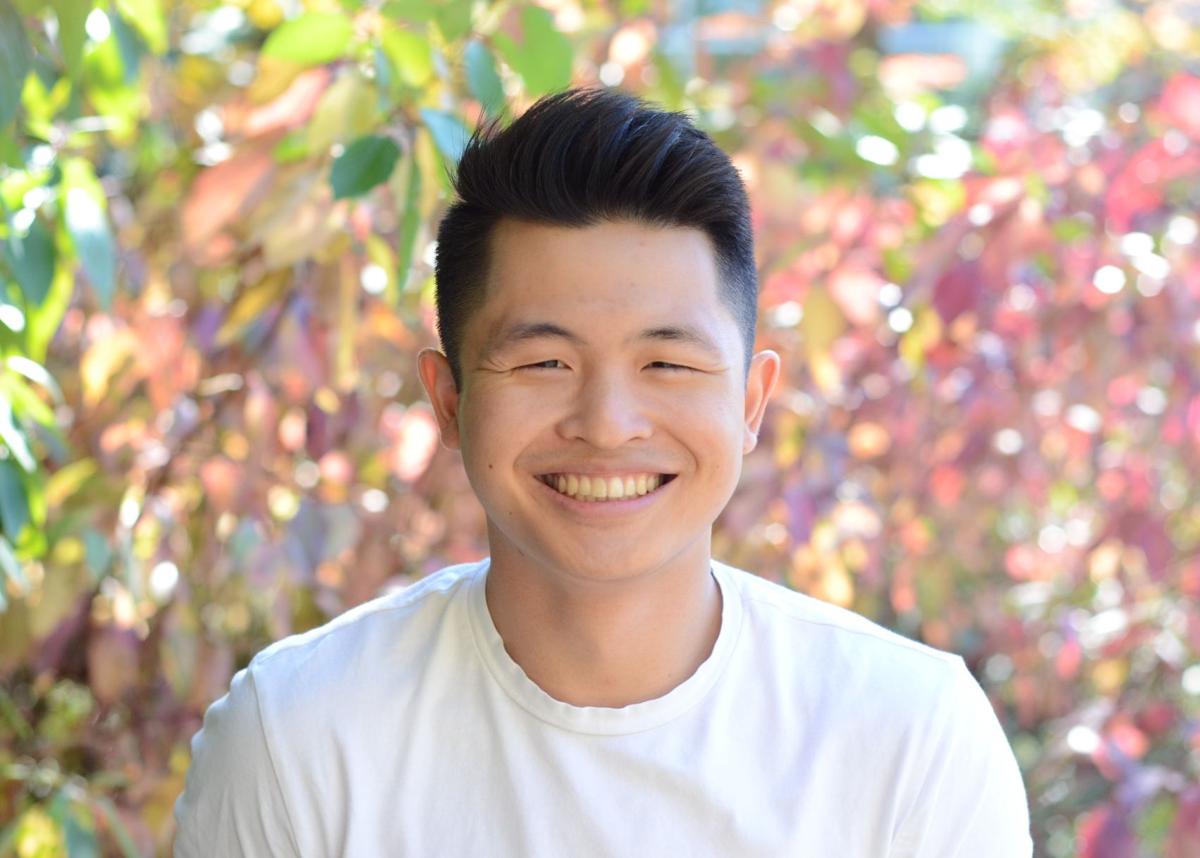 The Xingu River in northern Brazil differs from most other rivers in the Amazon because it’s one of the few clear, whitewater rivers in the region. This river supports a diverse range of unique and endemic species.

Researchers at Friday Harbor Laboratories (FHL), the UW research facility on San Juan Island, recently used CT scans to take a closer look at one of the river’s weirder inhabitants: the pacu, a plant-eating relative of the piranha.

The researchers wanted to compare differences between several pacus that spend different periods of time swimming and eating in the areas of the Xingu River where rapids and a special plant called riverweed grows.

Riverweed makes up the majority of the diet of Ossubtus xinguense, a vegetarian relative of piranhas and the focus of the study, that spends most of its time swiftly maneuvering between the herbivorous snacks. Other pacus in the same region only occasionally, if at all, enter the swift currents and eat riverweed.

“The first thought we had was: these animals were eating a weird plant,” Jonathan Huie, an undergraduate researcher who specializes in using CT scans to analyze fish morphology at FHL, said. “They must have some sort of feeding adaptations in their jaw morphology that allow them to eat these plants better than other plants, and also eat this plant better than their relatives which are not really eating this riverweed at all, but we didn't see any obvious trend or pattern.”

When jaw morphology didn’t provide any definitive answers as to why the O. xinguense is such a specialized feeder, Huie and his team decided to look at body shape.

“We kind of went back and we thought, well maybe it's more of a habitat limitation because the thing is only living in river rapids, which is traditionally a very challenging environment to live in because of the high flow and the amount of energy it takes to live there,” Huie said.

It turned out body shape was better at explaining the difference in diet and ecology between pacus in the Xingu River. Animals that spend a lot of time in rapids often have body morphologies that make it easier to live in such extreme environments, Huie explained.

“They're more streamlined, or they're flatter, or they have a downturned mouth where instead of facing forward, the mouth is pointed downward,” Huie said.

His team discovered this to be the case with the O. xinguense, but the jaw morphology was still a piece of the puzzle. Animals evolve different morphologies for specific reasons. Huie explained that this became a chicken or the egg type of question. Did these fish start off eating riverweed, and then adapt to entering the rapids to reach the food? Or did they start off with the ability to enter the rapids, and since they spent so much time there, adapt to eating the plant?

Huie and his team argue that because relatives of O. xinguense sometimes enter the rapids, but don’t always eat riverweed, it doesn’t seem like riverweed is the driving force behind entry into rapids. It’s more likely that somewhere along the way, the fish adapted to becoming a full-time rapids dwellers and then became specialized riverweed feeders, Huie explained.

This study helped Huie and his team refine the Serrasalmidae phylogenetic tree and taught lessons on ecomorphology, but it also had bigger implications. The Brazilian government is constructing dams on the Xingu River, which do provide energy benefits to the region, but also have major drawbacks.

This clear river also provides habitat to a plethora of other strange creatures, like freshwater stingrays and catfish, Huie said, and he hopes that this paper will raise some awareness, at least for the peculiar pacu.

“One of the really cool things that we got to do was highlight the fact that this species is so, so unique compared to all other pacus and piranhas,” Huie said, “Hopefully we raised some awareness that it should be protected.”