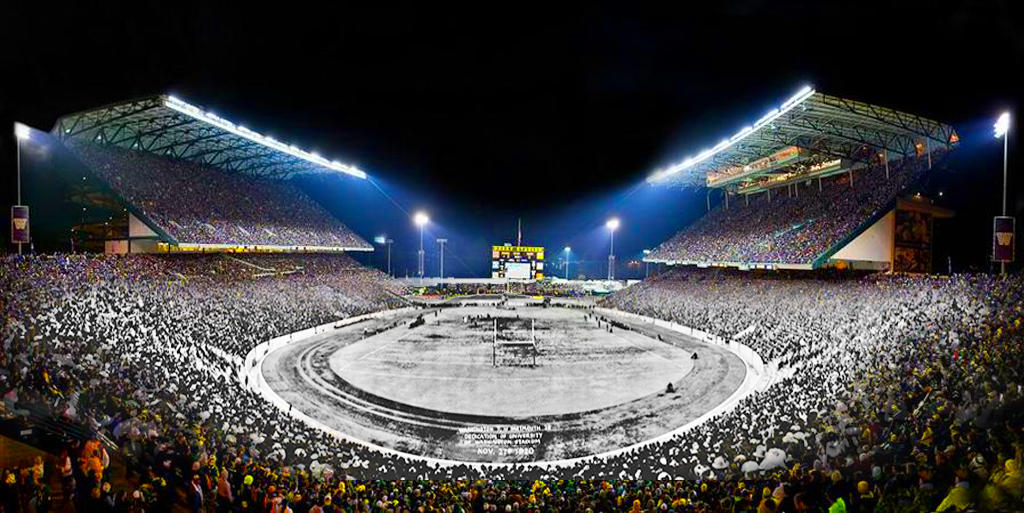 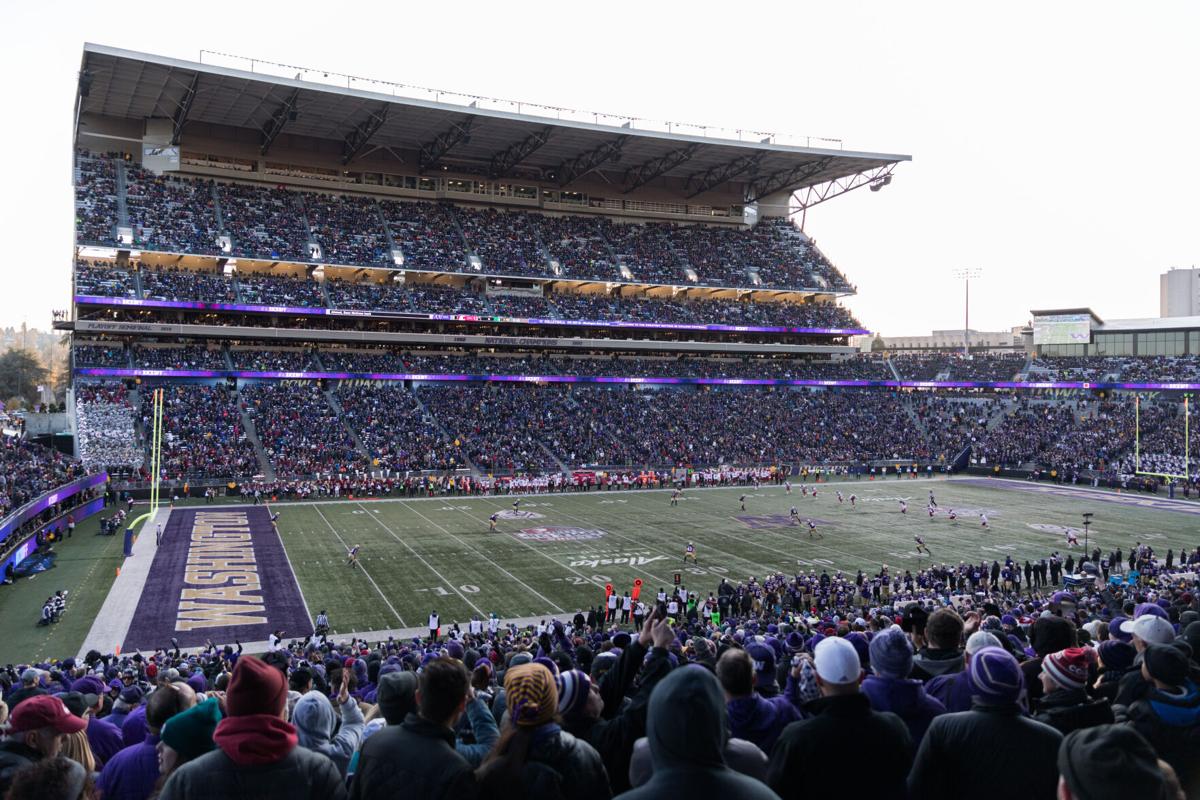 Just like anyone who has celebrated a birthday in 2020, Husky Stadium — otherwise known as Alaska Airlines Arena — won’t get much fanfare this fall, even on its 100th birthday celebration.

“Sure, we were all very much looking forward to the centennial,” UW associate athletics director (and former reporter at The Daily) Chip Lydum said. “But absence makes the heart grow fonder. [The stadium] has kind of a depth and a legacy that it’s going to last. It’s not just Johnny-come-lately or flavor of the month. It’s very much steeped in a history that’s deeper.”

Much of the lore of Husky Stadium, for both its own members and those of opposing teams, stems from its aesthetic appeal.

Rising majestically from the shores of Lake Washington, the stadium stands as unerasably as the Cascade Mountains, a sturdy final destination at the bottom of the gentle stroll through the downhill sprawl of UW campus buildings on brisk Saturday evenings.

“It’s so unique, right on the water, with this big canyon of a roof,” UW director of community and external relations Damon Huard said. “Every time you drive over 520, you see the jaws. It’s just a part of the fabric of this community.”

Unlike every other autumn of the past century, though, the traffic over Highway 520 on Saturdays for the past two months has been eerily scarce.

Even Husky Stadium — immune to the turbulence of a partial building collapse, a world war, and former President Warren G. Harding’s final public speech before his death just days later — couldn’t evade the suffocating grasp of the coronavirus pandemic.

Sure, leaves still blanket the blacktop of the Burke-Gilman trail just a few hundred feet from the doors of the open-air arena — a gateway usually blown open by a purple-and-gold tidal wave of sheer sonic volume after a weekend of tailgating.

But now it’s November 2020, and the pent-up silence in the seats at Husky Stadium feels like it might finally break out into a tantrum. The suffocating hush hanging over the arena epitomizes the upheaval of COVID-19 in the greater Seattle area.

Aside from one lone season in 2012, during which a $261 million renovation of new-and-improved press boxes, video screens, and audio quality relocated the Huskies’ home games to CenturyLink Field, 2020 marks the first time in 100 years in which UW fans won’t flood the doors of Husky Stadium.

Still, if there’s one thing the UW community can rely upon in the world’s eventual return to normalcy (if that ever truly takes place), it’s the reassuring silhouette of its high-rising football field, visible just above the fogline from across the lake, as reliable as the peak of Mount Rainier glistening behind it.

In some regards, “the greatest setting in college football” stands as a monument to the resilience and industriousness of its student body. In the late 1910s, each member of the enrolled UW population agreed to add $4 to their tuition as a way to finance a stadium for the football program.

Thus began the development of one of the most important sports landmarks in Seattle — a student-led enterprise erected over 50 years before the inception of the Seahawks or Mariners. Even throughout its construction, the student body played an important role in making the operation as smooth as possible.

“During the construction, students came down every day to pick the rocks off the property,” UW historian Dave Torrell said. “Everything that happened, up until they built the upper deck in the ‘80s, was basically financed by student fees.”

In 1920, the initial student-project was complete, and after a few 40,000 additional seats, a name change, and some 627 wins later, there it still stands — an homage to the millions of associated students and officials who’ve kept it alive and functioning for over 100 years.

“The NFL is awesome, but the NFL is a business,” Huard, who played eight seasons in the NFL, said. “Husky Stadium — it’s about the band, the fans, tailgating, the entire experience that you don’t get in pro football. It doesn’t feel corporate. It feels like the pageantry, the pastime, the All-American. It’s what we love.”

"There are just some things that are authentically Washington.”

Perhaps more than anything, though, the arena is a reminder of regular life — of Jimi Hendrix’s “Purple Haze,” of Rick Steves singing “Bow Down to Washington,” of 70,000 screaming fans cheering on Husky football during the past 10 decades.

“It’s humbling to think there’s been football played for that many years,” UW head coach Jimmy Lake said. “We definitely wish we had Husky nation there right behind us, but we know they’ll be watching at home on TV. Hopefully soon, once we get this thing under control, we’ll be able to flood that stadium with purple-and-gold fans.”

For the players, it's an unforgettable institution: a 120-yard stretch of grass beneath towering bleachers that seem to eclipse even the Seattle sky itself, perennially darkened by the drizzle that comes with the final season of the year.

”When you run out the tunnel, with the big roof, it just feels so big and massive, like the fans are just on top of you,” Huard said. “I remember the first time running out of that tunnel, and I remember the last time going up the tunnel. Those are special memories.”

For the students, it’s a place to forget about botched tests and the perplexing nature of the future — an atmosphere of shared emotion, where inhibition and vocal chords crumble beneath the weight of unabashed pep enthusiasm.

For the alumni, it’s a time machine in which memories are relived in the present — a sacred colosseum where nostalgia gets blitzed by the welcomed chaos of a well-timed pass rush or cheering from a hip-high child.

For now, though, the celebration has been put on hold. The bleachers are empty. The silence is deafening. Saturdays blend into Sundays, which blend into Mondays.

All that means, though, is that when fans do file through its gates once again, the atmosphere in one of Seattle’s most unflinching monuments will buzz with an electricity unparalleled even in the ranks of 100 years of the greatest setting in college football.

“I think we are now discovering how valuable many things are in life — in particular Husky Stadium,” Lydum said. “The place is just magical. On many days, when games are getting played, I just look around and go, ‘How did I get a chance to be a part of this?’

There are just some things that are authentically Washington.”

Wow! This is my favorite article that Nicholas has written. I laughed and got tears in my eyes. I never thought I'd get emotional when reading about a stadium, but this was really evocative. I was a little doubtful about "unerasable" but it worked. Thanks.