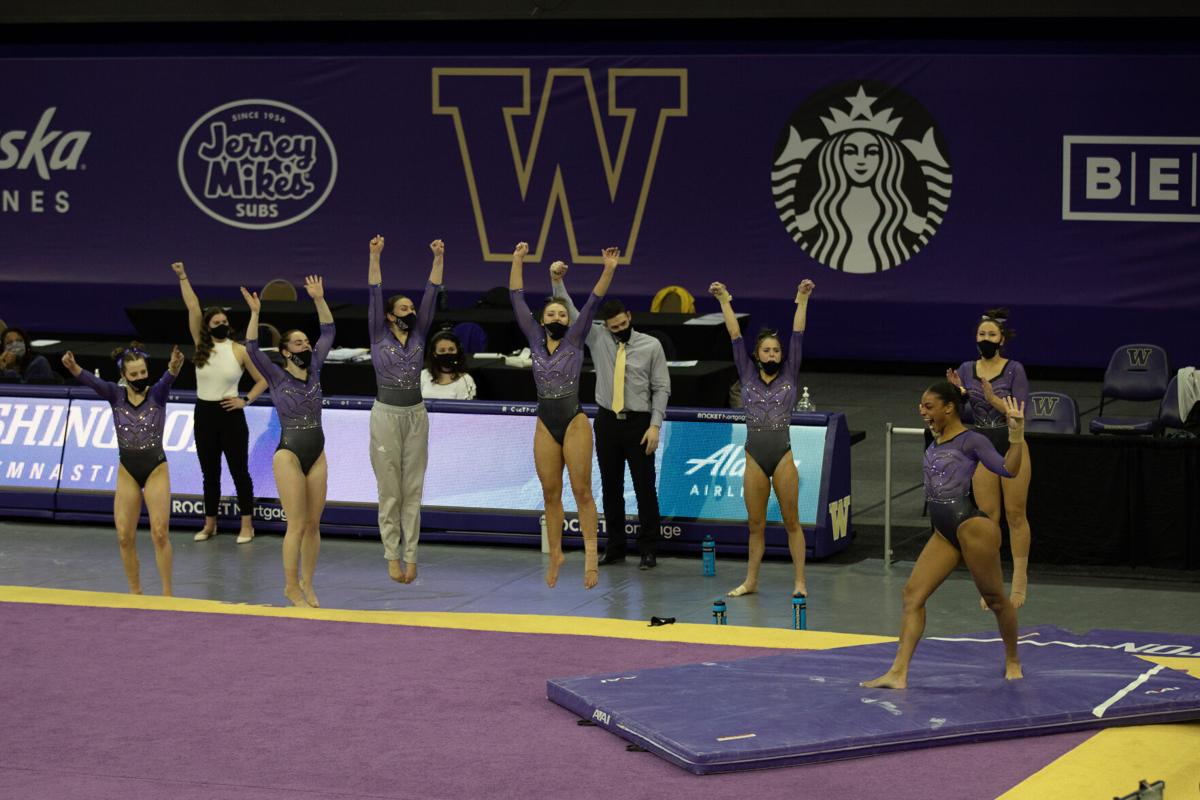 Members of the UW Gymnastics team cheer as Junior Amara Cunningham successfully sticks a landing during her floor routing against Cal on March 10, 2021 at Alaska Airlines Arena. Cunningham scored a season-best 9.950 in the event. 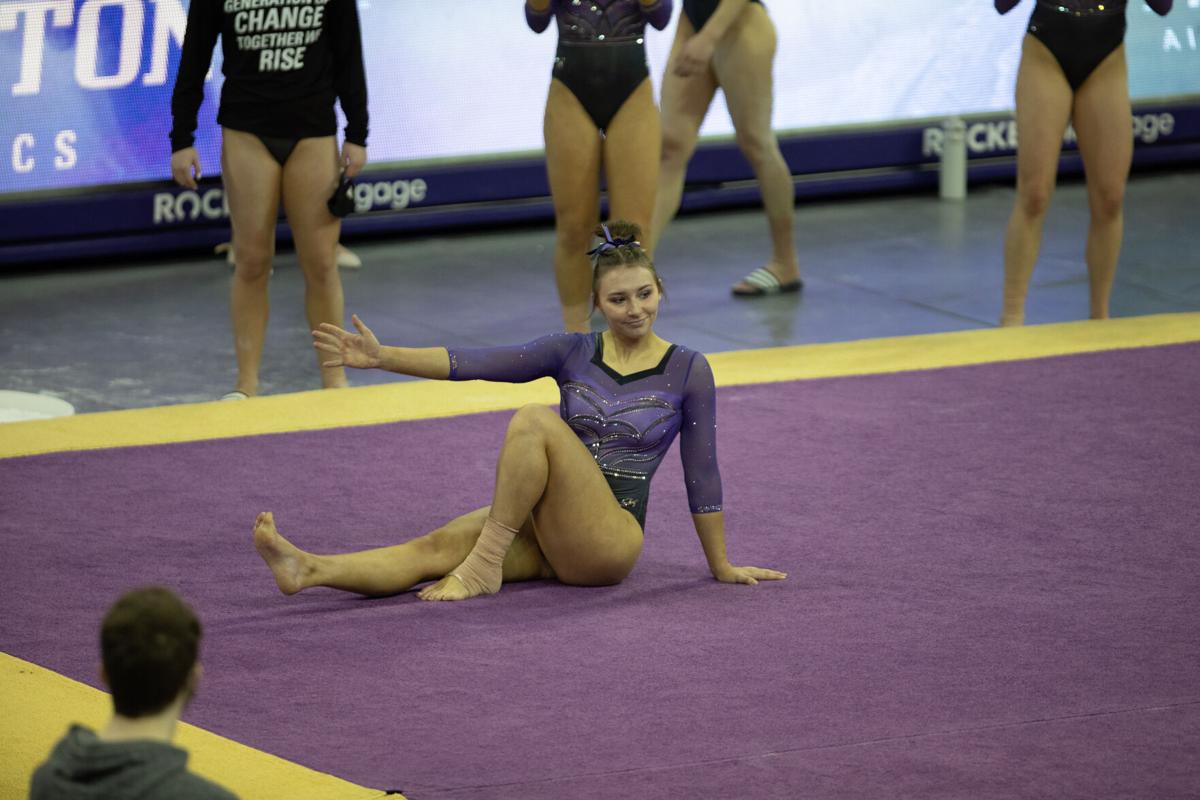 Freshman Skylar Killough-Wilhelm performs her floor routine during the meet against Cal on March 10, 2021 at Alaska Airlines Arena. Killhough-Wilhelm scored a 9.900 in the event, one of three 9.900 scores for Washington freshmen in the meet.

As head coach Ralph Rosso slammed down a big cardboard box in the center of his team’s huddle, the Washington gymnastics team erupted in cheers.

The contents inside the box — green Adidas sweaters from the UW athletics apparel sponsor — were withheld from the Huskies for much of the season, but Rosso had promised his squad early in the year that a complete performance on the gym floor would be rewarded with the new gear.

Wednesday afternoon inside Alaska Airlines Arena, the Huskies finally reached their goal, scoring a season-high 196.525 points against California in their final home meet of the year.

Even without Rosso's praise, the performance in the meet spoke for itself, as the Huskies surpassed its previous season-best, set just three days ago, by 1.525 points.

Rosso got that excellence from a trio of freshmen — Lauren Thomas, Skylar Killhough-Wilhelm, and Katie McNamara — all of whom scored a 9.900 in an event Wednesday afternoon.

Thomas and McNamara hit the mark on beam, while Killhough-Wilhelm scored on the floor, as the freshmen displayed confidence far beyond their years. In addition, McNamara and Killhough-Wilhelm both earned season-high performances in the all-around at 39.350 and 39.250, respectively.

With such a young roster, Rosso had stressed the importance of a strong start on vault to open the meet and give the Huskies some momentum all season.

It finally came against California, as Washington scored a season-best 48.975, the first of three season-high event scores on the day.

Junior Amara Cunningham led the Huskies with a 9.875, her season-best, as no gymnast scored below a 9.700. The vault score was just slightly higher than its previous best 9.850, but with the strong start, Washington had momentum for the rest of the meet.

The only event that Washington didn’t score a season-best on was bars. A fall from Thomas, the last gymnast in the rotation, meant the team was unable to drop one of its previous lower scores.

Even with the fall, Washington earned its second-highest score to date, at 48.950.

Moving to beam, the team scored its biggest improvement of the day. Washington crushed its previous best by nearly half a point, scoring a 49.175, led by a 9.900 in a bounce-back performance from Thomas after her fall on bars.

“I just try to let go,” she said. “I’m competing against myself and not focusing on anything else. Nice to help the team.”

McNamara matched Thomas’ score, as the two freshmen became the first Washington gymnasts of the season to score higher than a 9.900.

On floor, the Washington freshmen stood out again, as Killhough-Wilhelm opened the event with another 9.900, her highest score in any event of her career.

“I was super excited with how I did today,” she said. “I was finally able to do what I practiced. I’ve had an ankle injury that I’ve overcome the past few weeks, so I’ve been able to be closer to the end of the lineup and do what I practice, I couldn’t be more happy.”

Cunningham, though, was the star as she led Washington with her season-high 9.950 on floor, as the UW capped the meet off with a 49.425, its highest score in any event this year.

With scores continuing to improve every meet and experience building for the freshmen every day, Washington enters the final stretch of the season with confidence.

“We started off a little rough, but it’s a COVID year and everything is different,” Killhough-Wilhelm said. "Everyone on the team had to learn how to adjust to new coaches, new situations, new arena for the freshmen, but we’re finally starting to get a hang of it, get the roll started. Hopefully we can build from this.”

The Huskies will then hit the road and face the Golden Bears again Sunday, Mar. 14 at 2 p.m for their final regular season meet of the season.

They’ll do so with their jackets, which are finally out of the box.