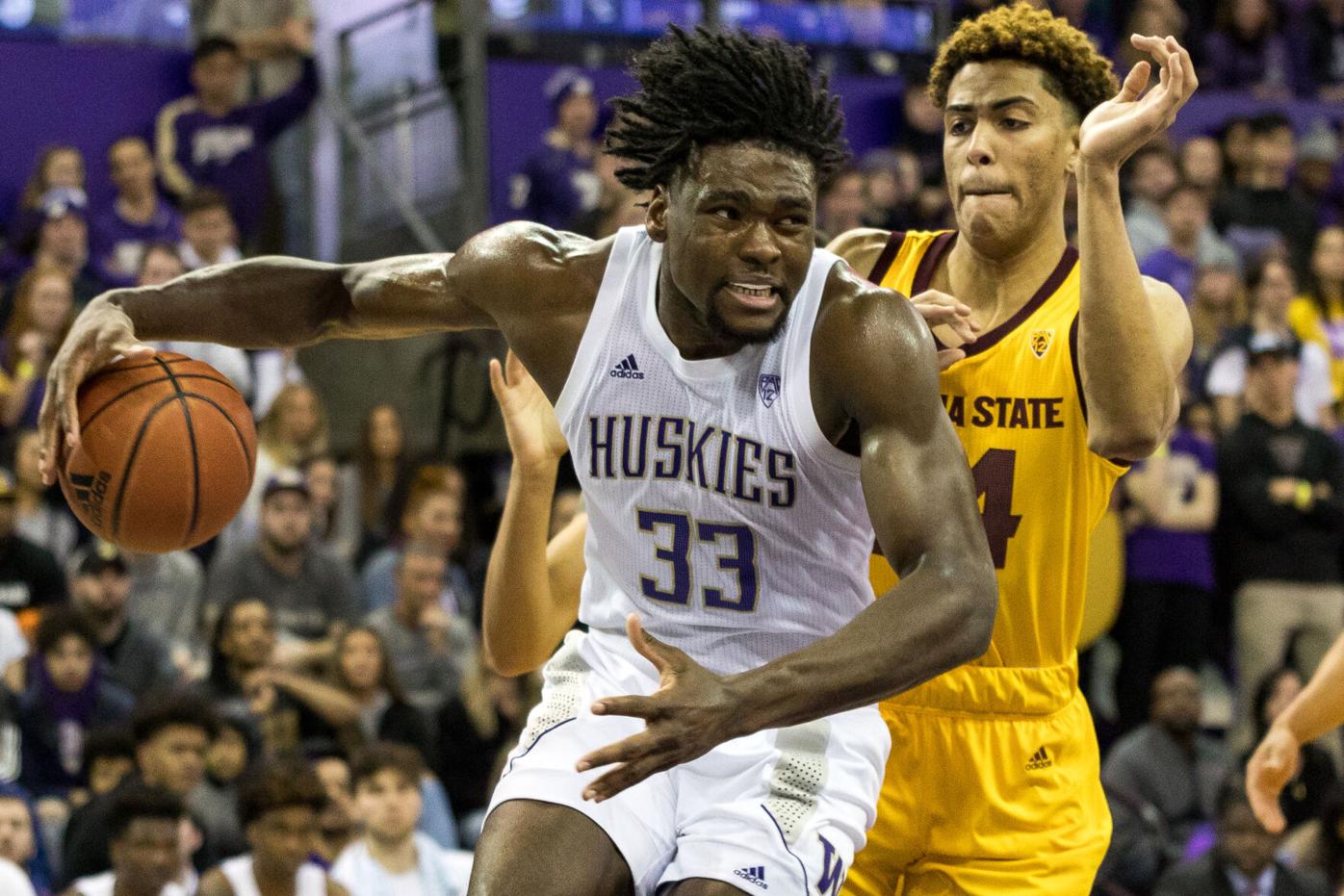 Isaiah Stewart controls the ball against Arizona State Feb. 1 2020. Stewart was selected No. 16 overall by the Detroit Pistons in Wednesday night's NBA Draft. 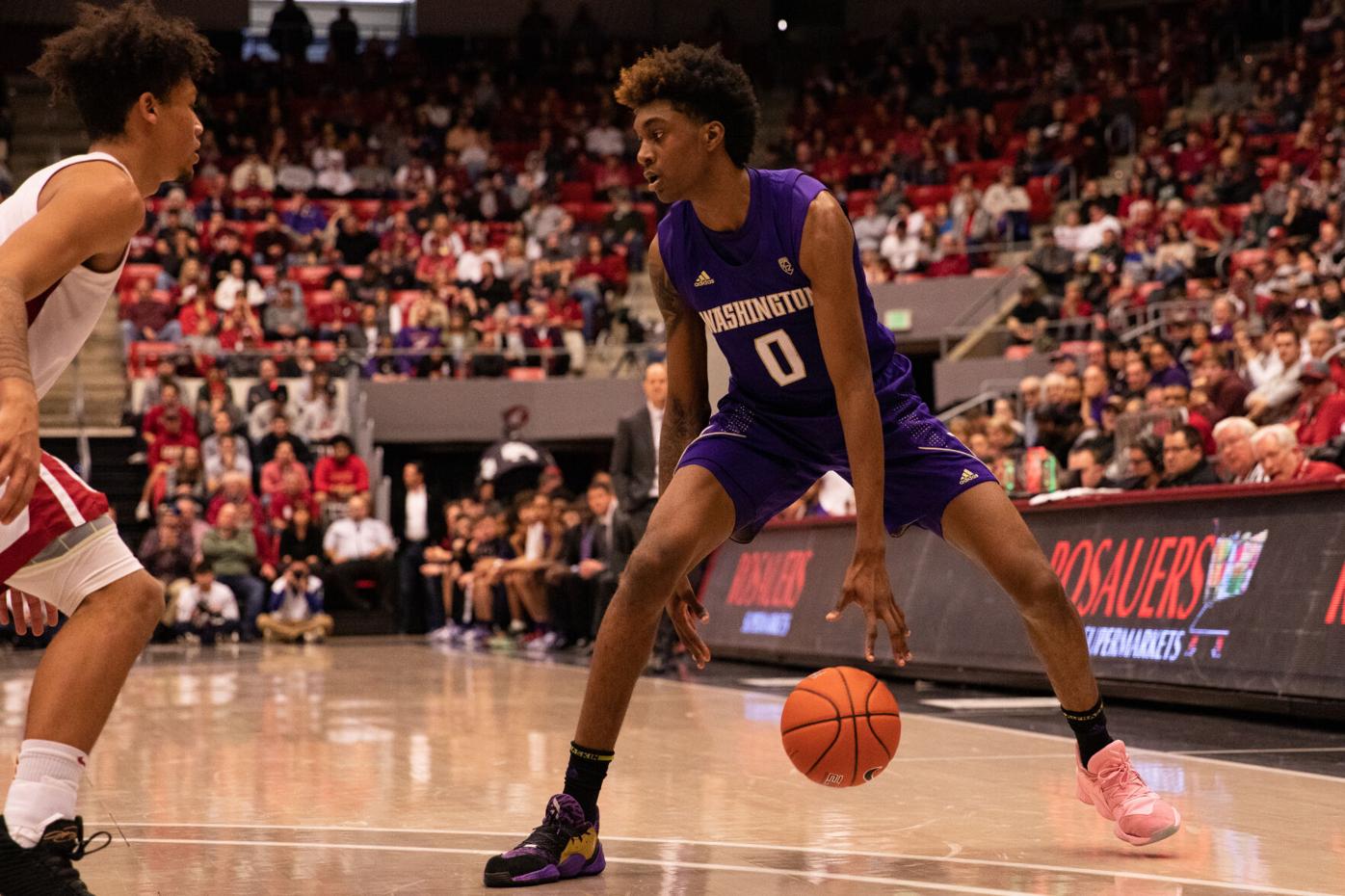 Freshman forward Jaden McDaniels scans the floor for an opening in the first half of Washington’s game against WSU at Beasley Coliseum on Feb. 9, 2020. McDaniels went No. 28 overall to Minnesota in the 2020 NBA Draft.

Two former Washington men’s basketball players heard their names called in the NBA draft Wednesday night when Isaiah Stewart and Jaden McDaniels were selected in the first round.

Stewart was selected No. 16 overall by the Portland Trail Blazers before being traded to the Detroit Pistons while McDaniels went to the Minnesota Timberwolves with the 28th pick via a trade from the Los Angeles Lakers. Stewart becomes the highest-selected Washington player since Markelle Fultz went No. 1 overall in 2017. McDaniels joins former Washington guard Jaylen Nowell in Minnesota.

A 6-foot-9 forward from Rochester, NY., Stewart was the No. 3 overall recruit in 2019, the highest in Washington’s history. With UW head coach Mike Hopkins’ roots in upstate New York, Stewart’s commitment established Hopkins as a solid recruiter and paved the way for McDaniels to join the Huskies.

McDaniels couldn’t have been any closer, growing up in Federal Way. The 6-foot-9 forward committed to Washington late in the recruiting process, opting to stay close to home rather than choosing from a list of blue-bloods such as Kentucky and UCLA.

With two former five-star recruits leading the way, it seemed Washington was on-track for a memorable season. Instead, the loss of Quade Green early in the season and a lethargic offense led the Huskies to a sub-.500 record and an ultimately disappointing season.

From the start, it became obvious why Stewart was so highly valued out of high school. Despite the offensive struggles as a team, the center was often the solution for the Huskies on both sides of the floor. Time after time the Huskies would feed Stewart the ball in the paint, letting him use his athleticism to make a play. He led the Huskies last season with 17.0 points per game and a .570 field-goal percentage.

Defensively, Stewart was a force inside the paint, setting Washington freshman records for blocked shots with 66, and rebounds with 281.

"With Isaiah, you are getting one of the hardest workers I've ever been around," Hopkins said. "He's also just the ultimate professional. He's focused, ready to go, can impact a team winning right away just in terms of his focus and his professionalism. He's really good on the inside and will really prove to everyone through his work ethic that he's a high level 3-point shooter, which is something he works on daily."

McDaniels had more of a mixed season for Washington. Finishing the season second on the team with 13.0 points per game and 5.8 rebounds per game, McDaniels was a key contributor to the UW offense. From the floor, he shot 40.5% and was 33.9% from 3-point range.

The Federal Way native finished second on the team with 65 assists, but had trouble controlling the ball, committing a team-high 100 turnovers. Discipline was also a key knock on McDaniels’ game, as he struggled to control his emotions when calls didn’t go his way, leading the Pac-12 in technical fouls, with six.

Despite the shortcomings, McDaniels’ athleticism and height could turn him into a star in the NBA. He has often drawn comparisons to Kevin Durant and Jonathan Issac, among others.

"[Jaden] is obviously exceptionally talented," Hopkins said. "The thing that separates him is that he’s an elite competitor. That competitive nature will definitely carry his talent. He can handle adversity and I believe that’s going to make him a great pro. He is always working on his game and is very coachable. He learned, listened, accepted everything thrown at him last season, he just wanted to help the team win."

Stewart and McDaniels join a growing list of former Huskies in the NBA. During the 2019 NBA Draft, Matisse Thybulle was drafted in the first round by Philadelphia and Nowell was picked in the second round by Minnesota.

This week in sports