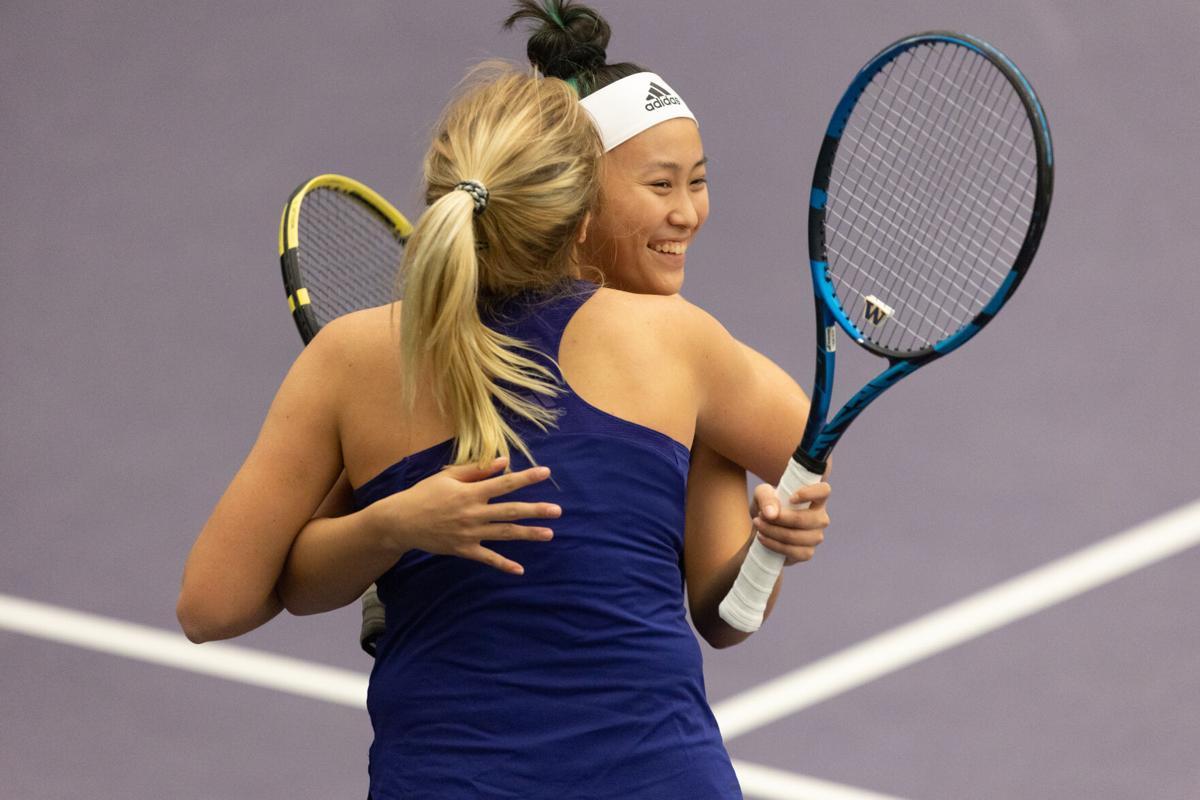 Freshman Yolanda Lin celebrates with doubles partner Sedona Gallagher after winning four straight points in a nailbiting tiebreaker against Washington State at the Nordstrom Tennis Center. The Huskies beat the Cougars 5-2 to improve to 7-0 on the season. 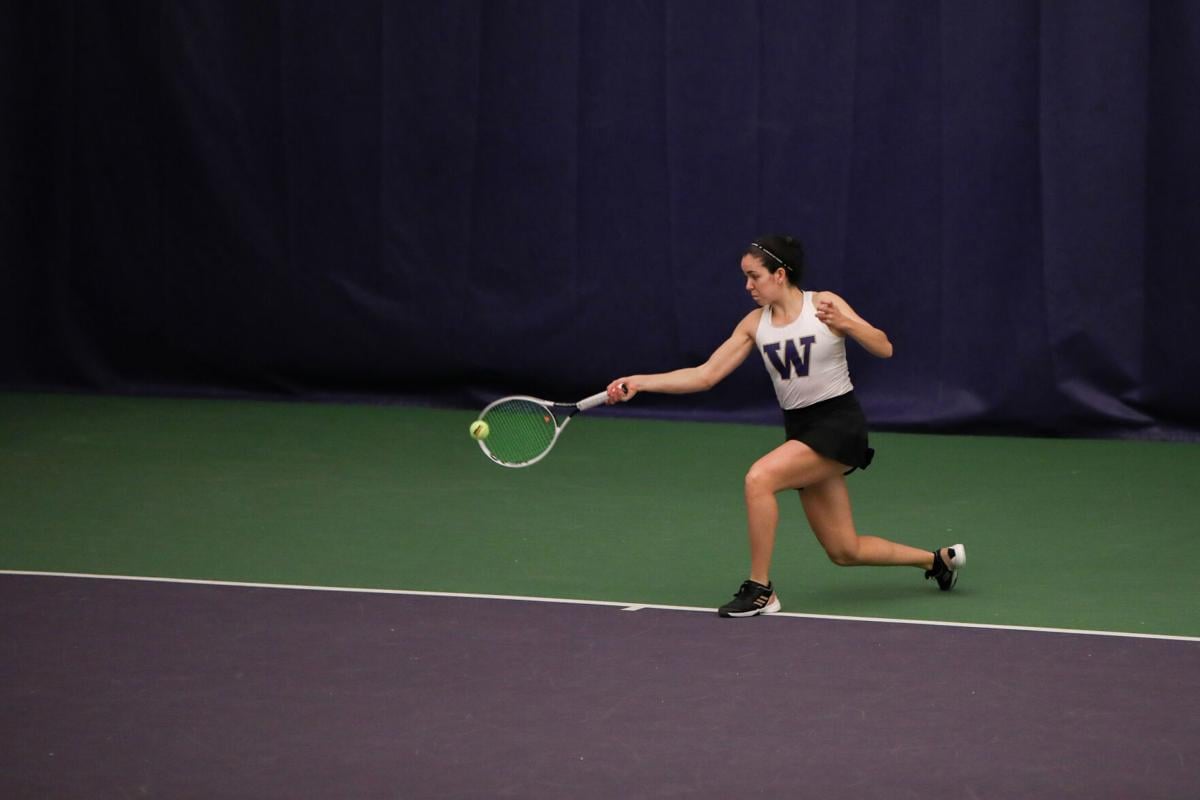 Sarah-Maude Fortin returns an Idaho serve in the Washington women's tennis match at Nordstrom Tennis Center on Jan 31, 2021. Fortin fought for two wins against Washington State, overcoming deficits in both the singles and doubles matches.

It wasn’t easy, but the Washington women’s tennis team fought through adversity to top Washington State, 5-2, at the Nordstrom Tennis Center.

Troubles struck early for Washington in its doubles matches, as all three pairings faced a 2-1 deficit to open the match.

While the pairing of Zoey Weil and Tara Chilton were unable to overcome the early deficit losing their match 6-2, Washington wasn’t out of the race for the doubles point yet.

The furious comeback began with the other two pairings that included a confident true freshman in Sarah-Maude Fortin alongside experienced senior Vanessa Wong.

“I was pretty confident, feeling good,” Fortin said. “I’ve been practicing really well, but I was a little nervous because it was my first big match. I’m a freshman, so it was so exciting to be back on the court. We hadn’t competed in so long so it’s just fun being able to compete.”

The number one pairing of Wong and Fortin managed to overcome the early deficit, bringing the set to a 6-6 tie, winning in the tiebreaker and drawing the doubles matches even at 1-1.

“Me and Vannessa believed we would win,” Fortin said. “I think we were confident, so we just worked hard, pushed through it and it paid off and we got the W."

It was more of the same for the number two pairing of Sedona Gallagher and Yolanda Lin, as they dug their way out from a deep hole. The duo managed to force a 6-6 tie and when they got to the tiebreaker, they were faced with another hole down early with three straight match points for the Cougars.

In the end, they ended up pulling it off in spectacular fashion, giving Washington the second doubles win and earning them the first point of the overall match.

While Washington State scored the first two points of the single matches, the majority of the Washington players were able to ride the wave of momentum from the double matches.

Wong was the first Husky to wrap up her single match, beating her opponent in straight sets with the scores of 6-3 and 6-2. Wong still has yet to drop a set on the year.

Junior Zoey Weil may have been unable to win in her doubles pairing, however, in her singles match, the Columbus, Ohio native was the second Husky to win, defeating her opponent in back-to-back sets with a score of 6-3, 6-2.

Gallagher then had the match-clinching point, winning her match in straight-sets by the score of 6-3, 6-3. The junior had been struggling of late, with her holding Wasington’s sole loss from last Friday’s match against Eastern Washington.

Fortin closed out the day for the Huskies in spectacular fashion after facing adversity once again in the singles match.

“For sure it [the early adversity] gave me confidence that we’re able to beat them and it was good energy, made me be positive,” Fortin said.

The Montreal native carried the energy over into her first set, winning 7-5. In the second set, she fell behind early, but stayed focused. The freshman turned it around and ended up winning 7-5 again to cap off the Huskies’ (7-0) undefeated start to the season.

UW head coach Robin Stephenson feels that this match showed exactly what this team is all about: toughness.

“The fight and the belief and the heart of this team,” she said. “It’s tough, we haven't played a Pac-12 type competitive match in almost a year. I though the girls, when it got tough, we raised our level and it showed a lot about what this team is all about”

The Huskies will be back in action against Baylor on Sunday at 1:00 p.m.