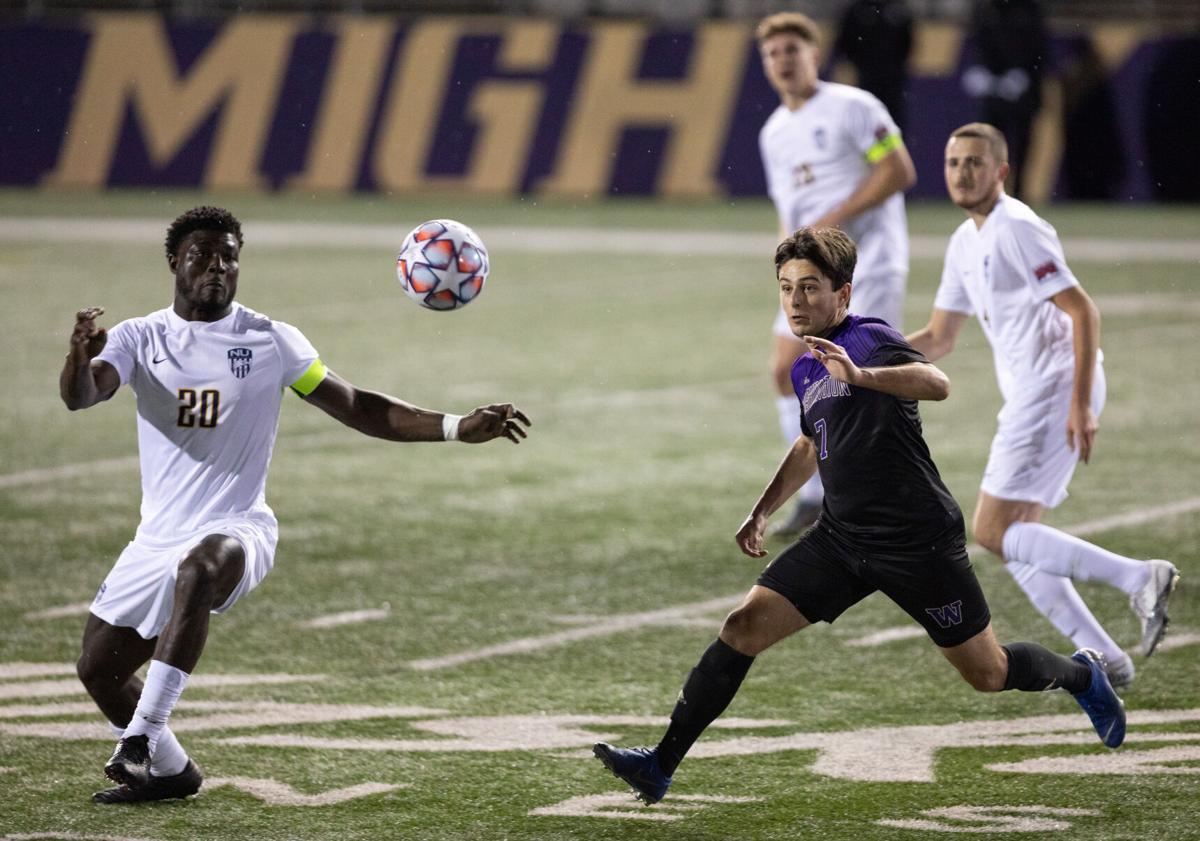 Sophomore midfielder Imanol Rosales eyes the ball in Washington's 6-0 win over Northwest at Husky Stadium on Feb. 4, 2021. Rosales recorded two assists off of corner kicks in the victory. 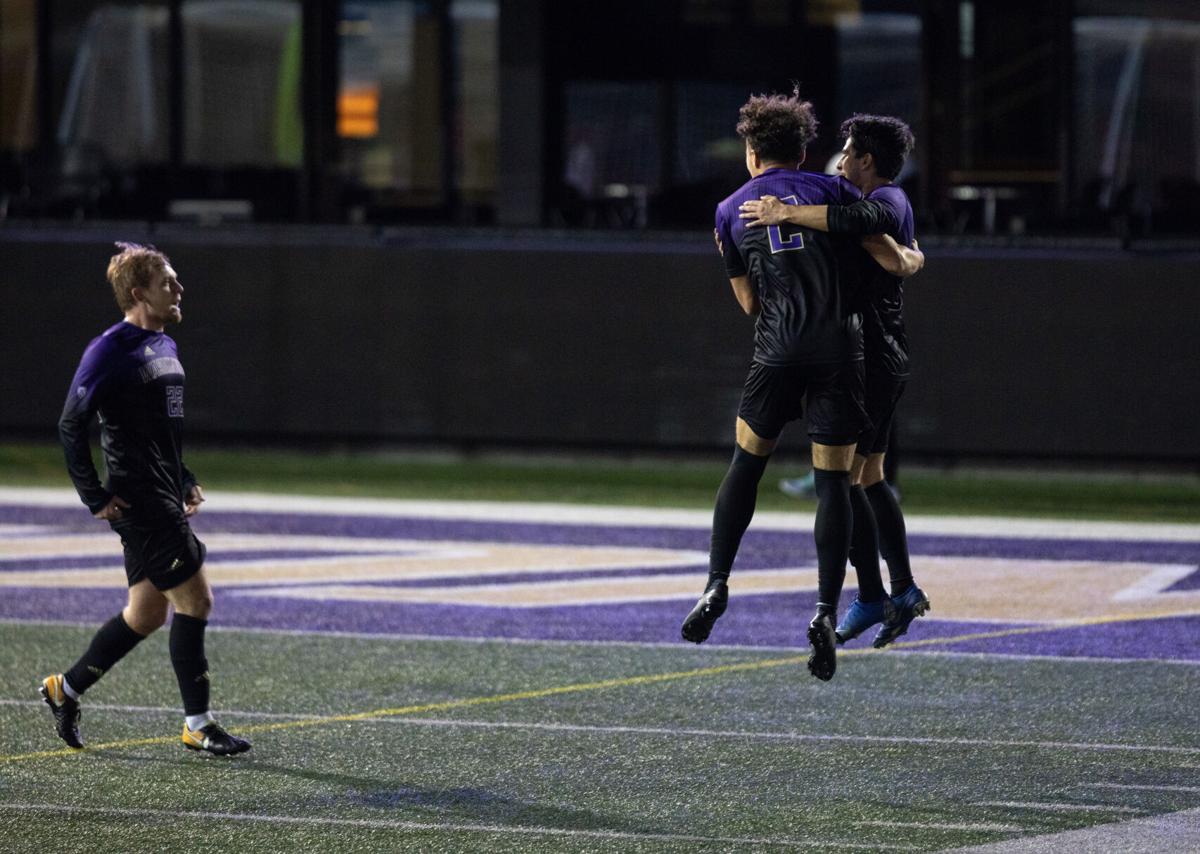 The Washington men's soccer team celebrates a goal in its matchup against Northwest at Husky Stadium on Feb. 4, 2021. The Huskies beat the Eagles 6-0 in their first match of the season.

Twenty minutes into its first game of the season, the Washington men’s soccer team was feeling the absence of departed members from last year’s squad. Replacing three All-Conference players is no easy task, and it seemed to take the Huskies a bit of time to figure that out.

If Northwest University was sensing any bit of optimism against the reigning Pac-12 champions, its hopes were quickly dashed as a flurry of attacks put Washington ahead for good on its way to a 6-0 season-opening victory.

The first half started slow, with the Huskies (1-0-0) creating only a few chances during the opening 20 minutes of action.

“We told the guys to be patient,” head coach Jamie Clark said. “It always takes time to wear down a team. We knew that and it’s more that you don’t lose your confidence or composure, because sometimes soccer is a game where you only score one or two goals and it might take 70 minutes to get there."

The snooze-worthy start was given a quick awakening though.

Near the 21st minute, the uninspiring Washington attack was gifted a chance. A sloppy Northwest clearance fell to midfielder Christian Soto outside the 18-yard box, and the sophomore hit a screamer of a volley into the back of the net, putting the Huskies up 1-0.

“In a funny way I was happy that the game stayed as tight as it did for awhile because it made us earn it,” Clark said. “There was even a little bit of frustration building in and that’s a good thing. In terms of you’ve got to deal with some elements, some patience.”

Four minutes later, with the momentum picking up, the Huskies scored their first set-piece goal of the night courtesy of junior defender Kendall Burks off a corner from sophomore midfielder Imanol Rosales.

In the second half, however, the match turned into the Nick Scardina show, with the sophomore midfielder scoring three goals in the span of 12 minutes.

The first was a crafty flick off a low cross from Kalani Kossa-Rienzi, which put Washington up 3-0 in the 49th minute. It was also the first goal of Scardina’s career.

Last season, the sophomore midfielder made only five appearances, failing to record a goal or assist in any game.

“Even though I didn’t play that much last year, I knew my time was going to come,” Scardina said. “This year it’s just being aggressive and coming into the year going all out.”

In the 58th minute, Scardina scored his most impressive goal of the night, a diving header that he redirected into the far corner away from the Northwest keeper. Just three minutes later, the hat trick was sealed as Scardina tacked on his third of the night.

The Huskies scored their sixth and final goal of the night in the 70th minute as junior forward Gio Miglietti put one in the back of the net off of another Rosales corner, capping off the 6-0 victory.

While the scoreline was telling on its own, Washington’s 31-0 advantage in shots, including 16-0 on goal, is certainly a stat players from the Northwest squad will want to forget. The lopsided-nature of the stats didn’t end there, as the Huskies had a 11-0 edge in corner kicks and forced 10 saves of Northwest goalkeepers Brandon Karberg and Alexander Thiehofe.

The competition will get a little tougher for Washington this weekend, as it hosts Gonzaga on Sunday at 2 p.m.

“The key for us is keeping our mentality of ‘foot on the gas pedal and going all-out,’” Scardina said. “We had 31 shots for a reason, I mean we like to go forward and we like to be organized. Definitely the key for us going forward is staying aggressive.”

The Bulldogs (0-1-0) dropped their season-opener to Seattle University Wednesday night.

Earlier on Wednesday the Huskies were selected to finish first in the Pac-12. It is the first time in Washington history that it is preseason conference favorites.