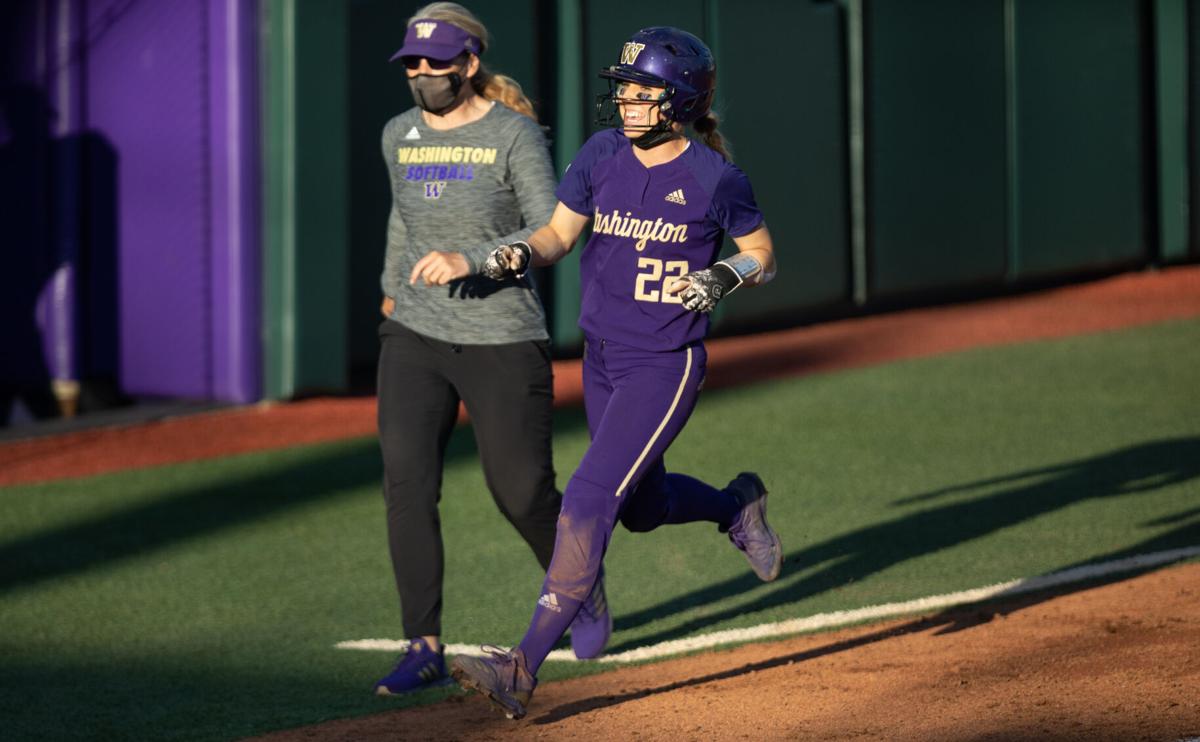 Graduate senior Sis Bates smiles as she runs home during Washington's 4-2 win over Oregon at Husky Softball Stadium on April 17, 2021. Bates showed off with two RBIs, two steals, and a number of highlight-reel plays Saturday night against the Ducks. 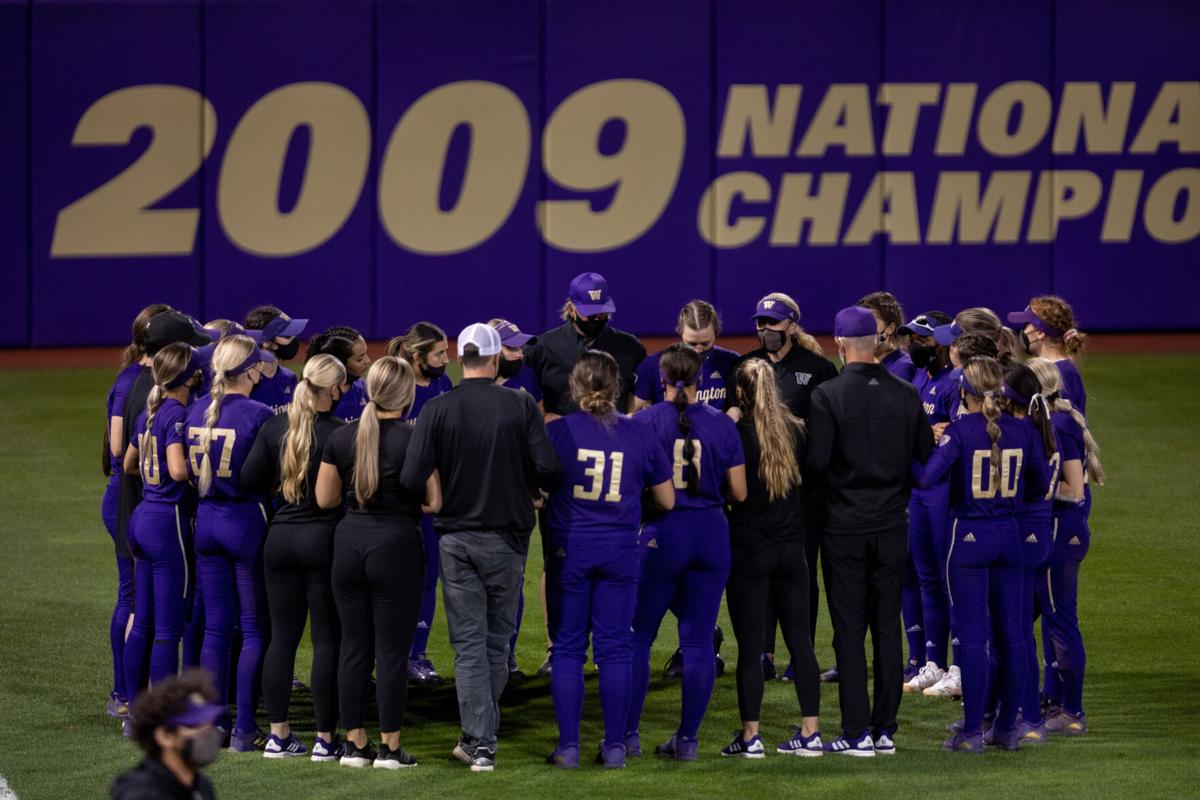 The Washington softball team huddles on the field following a 10-1 loss against Oregon at Husky Softball Stadium on April 17, 2021. The Huskies lost in five innings to the Ducks on Saturday night, suffering their first run-rule defeat of the season.

Much like a multi-tool, Sis Bates continues to utilize her unique skill set.

Saturday evening at Husky Softball Stadium, Bates displayed her bat, her speed, and her glove, driving in two runs, stealing two bases, and making a number of impressive defensive plays at shortstop. The multi-tool graduate senior proved valuable, guiding the No. 6 Washington softball team to a series-clinching 4-2 victory against No. 5 Oregon in Game 1 of the doubleheader.

“She can help you win a game just by all of her skills,” head coach Heather Tarr said. “Love having Sis Bates on our team for sure.”

Following the Huskies’ (33-6, 11-2 Pac-12) 8-0 win Friday night, Saturday’s conference game proved much more competitive, as they took an early lead against the Ducks (28-7, 6-5) before falling behind and eventually coming back to win.

Tied up at 2-2 in the bottom of the fourth inning with the bases loaded, Bates shined when the Huskies needed her most, sending an 0-1 pitch from Brooke Yanez back up the middle to give the UW a 4-2 lead.

From there, senior pitcher Gabbie Plain (22-0) denied Oregon of a comeback attempt by retiring 9 of the final 11 batters to continue her undefeated start to the season.

The score may have been a bit closer, though, if not for the glove of Bates at shortstop. With a runner on third in the sixth inning, Bates snagged a one-hopper to her left and fired to first base, preventing a sure-RBI-single. In addition to the bat and glove, the Ceres, California native swiped two bases, continuing her perfect 18-for-18 start to the season on stolen base attempts.

“As a team actually, after COVID[-19] and everything, we’ve been really working on our sprint work,” Bates said. Everybody has improved a lot this year.”

Before the Huskies took back the lead in the fourth inning, they took an early 1-0 lead in the second. Junior Sami Reynolds hit her ninth home run of the season, a solo shot, one of four runs charged to Oregon starting pitcher Samaria Diaz (3-1) before she was pulled with one out in the fourth.

Plain was less dominant than Friday night, allowing the Ducks to put two runs on the scoreboard in the third inning, but struck out a batter with the bases loaded to limit the damage.

Yanez took over for Diaz with the bases loaded in the fourth inning, failing to hit the strike zone for four straight pitches, walking in the tying run before Bates broke the tie in the ensuing at-bat.

After Plain dominated in the first two games of the series, holding Oregon just two runs in 14 innings, Washington’s sophomore pitchers, Kelley Lynch and Brooke Nelson, struggled in Game 2 of the doubleheader.

The Ducks were highly efficient on offense, hitting a grand slam off of Lynch (5-5) in the third inning after three straight walks, forcing the Huskies’ starting pitcher out of the game early.

“Unfortunately she gave up too many walks today, that was her demise,” Tarr said. “It wasn’t really the home runs so much it was the walks.”

All in all, Lynch lasted all of three innings, allowed three hits, four walks, and the grand slam.

Things got worse when Nelson entered the game, as she surrendered six runs on four hits and two walks in just 1 1/3 innings.

All in all, Oregon scored 10 runs on the game, the second-most against Washington this season, as the UW dropped the non-conference game of the doubleheader, 10-1.

Washington was unable to muster much offense, tallying just two hits and pushing just one run across. Fifth-year senior Taryn Atlee drove in the Huskies’ only run, an RBI-single in the second inning, which initially gave them a 1-0 lead.

Lynch began to unwind in the top of the third, loading the bases for the second straight inning. Unlike the second, in which she retired the threat with a strikeout, Mya Felder hit a grand slam to give Oregon a 4-1 lead.

Washington will hope Plain has enough juice in the tank to start Sunday afternoon as it looks to complete the sweep of conference games at 2 p.m.