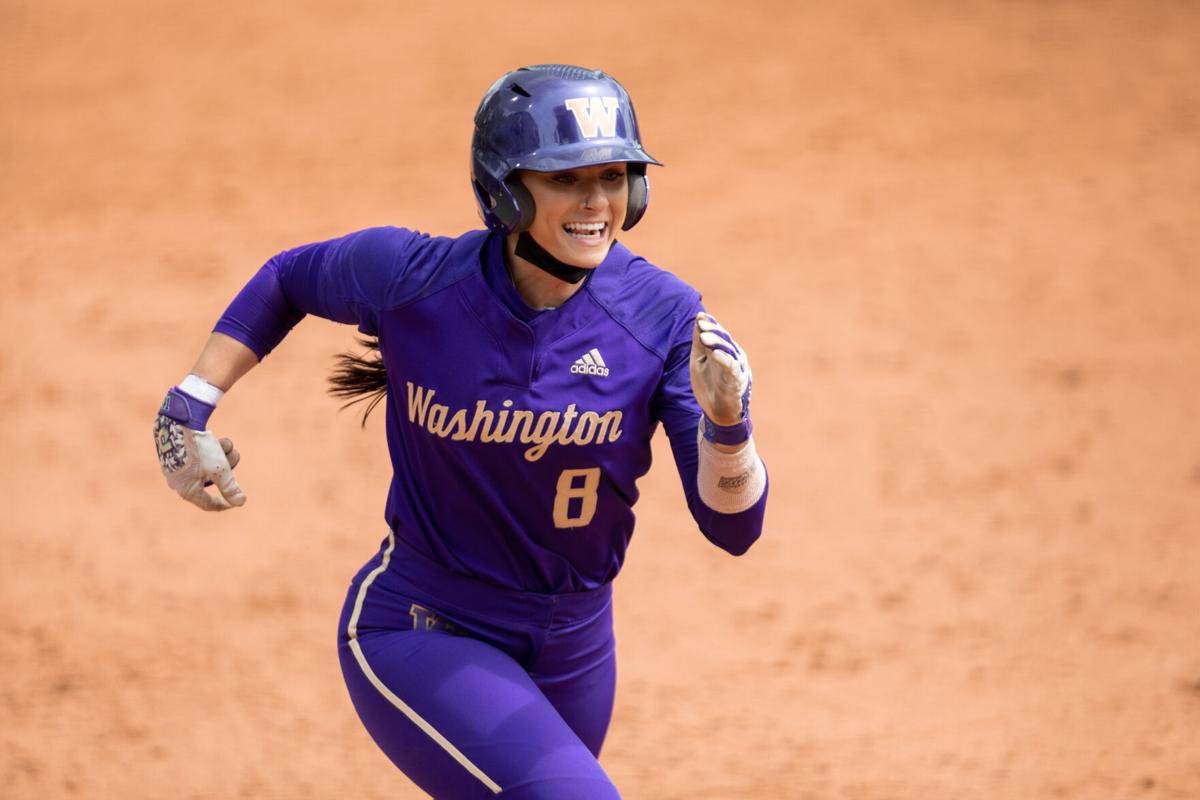 Junior Baylee Klingler smiles as she runs to home plate during Washington's 6-3 win over Utah at Husky Softball Stadium on May 8, 2021. Klingler hit her 16th home run of the season in Game 2 of the doubleheader, moving her to second in the Pac-12 Conference in home runs. 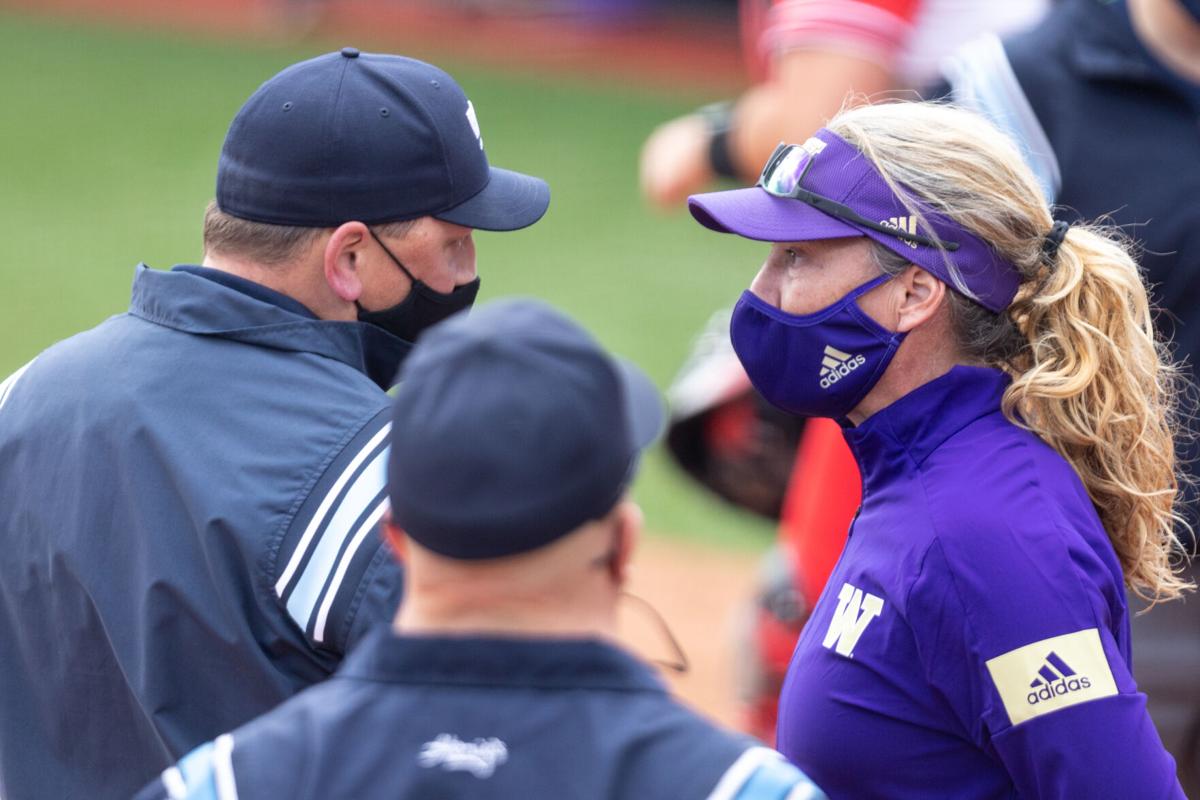 Head coach Heather Tarr confronts the umpire after an unclear call in Washington's 6-3 win over Utah at Husky Softball Stadium on May 8, 2021. Tarr was ejected from the game, the first such incident for the coach since 2016. 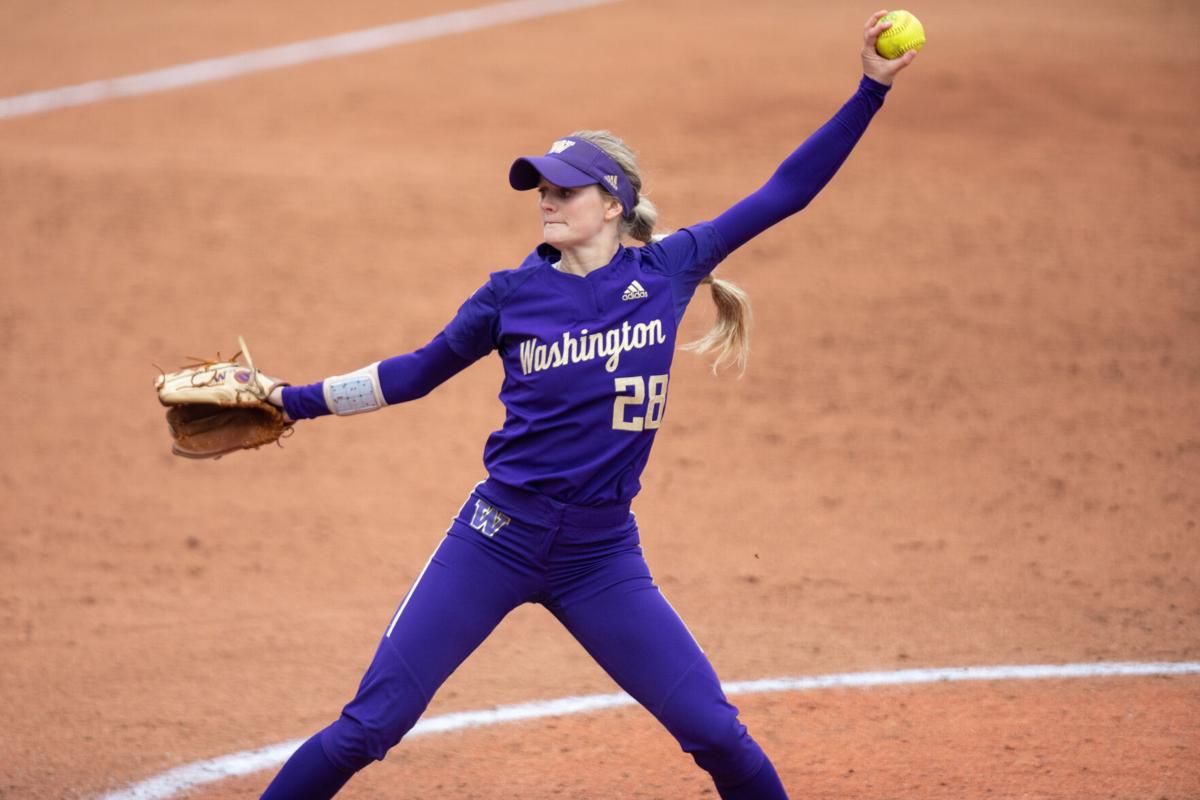 Senior Pat Moore pitches the ball in Washington's 6-0 win over Utah at Husky Softball Stadium on May 8, 2021. Moore allowed just one hit in 5 2/3 innings of scoreless ball, picking up her third victory of the season.

After third inning defensive miscues put the No. 5 Washington softball team down by three runs Saturday afternoon against Utah, Washington found a spark after head coach Heather Tarr was ejected. The Huskies bounced back, scoring five runs in the sixth inning to defeat the Utes, 6-4, and take the conference series at Husky Softball Stadium.

The Washington bats struggled against Utah pitcher Mary Beth Feldman (1-4) for the better part of five innings, failing to score a run until there were two outs in the fifth. The Huskies (38-9, 15-4 Pac-12) then exploded in the sixth, scoring five runs, including the go-ahead three-run home run from sophomore Kelley Lynch that gave the UW its first lead of the game at 6-3.

“It was a matter of time,” Tarr said about the comeback. “People came here to play softball. Sometimes for this group, they care so much, they want to win so bad, that we make it harder on ourselves than it needs to be, but it was only a matter of time.”

Before the Huskies’ offensive outburst, things were rough-going against the Utes (20-30, 2-18), as the game was dominated by a third inning defensive unraveling, a coaching flare-up, and a three-run deficit to the Pac-12 bottom-feeders.

Only one ball left the infield in the inning against Washington starting pitcher senior Gabbie Plain (26-1), but the Utes took advantage of poor fielding from the Huskies. Errors from junior infielders Baylee Klingler and SilentRain Espinoza — including another poor play from Espinoza that snapped Plain’s streak of 8 1/3 innings of no-hit ball — gave Utah a three-run lead in the top of the inning.

In the home half of the third, tensions flared.

With Washington trailing 3-0 and Jadelyn Allchin at third base, the sophomore raced home in an attempt to score on a wild pitch from Feldman. Instead, Allchin was called out, with the call on the field that the UW batter, Klingler, interfered with the throw home from the Utah catcher.

The umpires met to discuss the play, calling Allchin out, upsetting Tarr and eventually leading to her ejection.

“I don’t usually complain about calls, but I thought that the situation warranted some questioning,” Tarr said. “My few words caused it to happen, so luckily I didn’t use any profanity because those get written up in the reports and never look good to anybody. I was just trying to make sure the players knew that I was going to question that all day long, so the team did awesome coming back and finding a way to win that game.”

It was the first time since 2016 that Tarr has been ejected from a game.

Despite the early deficit, the Huskies bounced back, as Plain returned to usual form, allowing just one more hit on the game, a harmless RBI-single in the seventh inning. She finished the game with eight strikeouts, allowed three hits, three walks, and just two earned runs.

With Plain holding down Utah after the third inning troubles, the UW bats chipped into the lead in the fifth inning. Lynch reached on an error and later scored on a triple from Allchin that was just feet shy of a home run.

Graduate senior Morganne Flores nearly tied the game in the sixth inning, hitting a double off the top of the left-center field wall, putting two on with no out. Washington tied the game on a groundout from junior Sami Reynolds and a single from senior Noelle Hee, setting up the game-winning home run from Lynch with two outs.

Freshman Sarah Willis got the start in the circle for Washington in Game 2, but some trouble in the second inning opened the door for Pat Moore to get a heavy dose of work.

The senior pitcher had one of her most impressive performances in the purple and gold, surrendering just one hit in 5 2/3 scoreless innings to help the Huskies take the second game of the day, 6-0.

“I know that if I throw it over the white thing, we’re going to get outs, so that’s what I’ve been focusing on,” Moore said. “Attacking the hitter and trusting my defense.”

Moore (3-0) has now appeared in five of the past eight games for Washington, allowing just one earned run on six hits in 12 2/3 innings.

“Just always being ready for the team is something that I really pride myself on trying to do every single game, every single pitch,” she said. “Just be ready when my name is called and that’s the mentality I’ve been going with for pretty much the bulk of the season.”

With Moore in the circle, Washington brought in freshman Jenn Cummings to catch for the remainder of the game. Cummings also produced with her bat. Although she did not record an official hit, she put the ball in play twice with hard contact, advancing a runner on a fielder’s choice in the second inning, as well as the fourth, scoring in both innings.

Graduate senior Sis Bates led the UW offense early, going 2-for-3 with a double, a walk, and an RBI. She also flashed the leather at shortstop, leading a double play in the fourth inning, assisting on another in the first, in addition to her usual impressive range on groundouts.

The most impressive inning offensively for the UW came in the sixth when Klingler and Flores hit back-to-back home runs to extend the lead to six. Klingler extended her team-leading home run total to 16, good for second-best in the Pac-12. Flores solo shot tied her for third in Washington history with 58 career home runs.

Lynch followed two batters later with a double to score one more, making it 6-0 and bringing her daily RBI total to four.

With Lynch and her teammates swinging the bat well, Washington will return to the field Sunday, May 9 at noon looking for the series sweep.