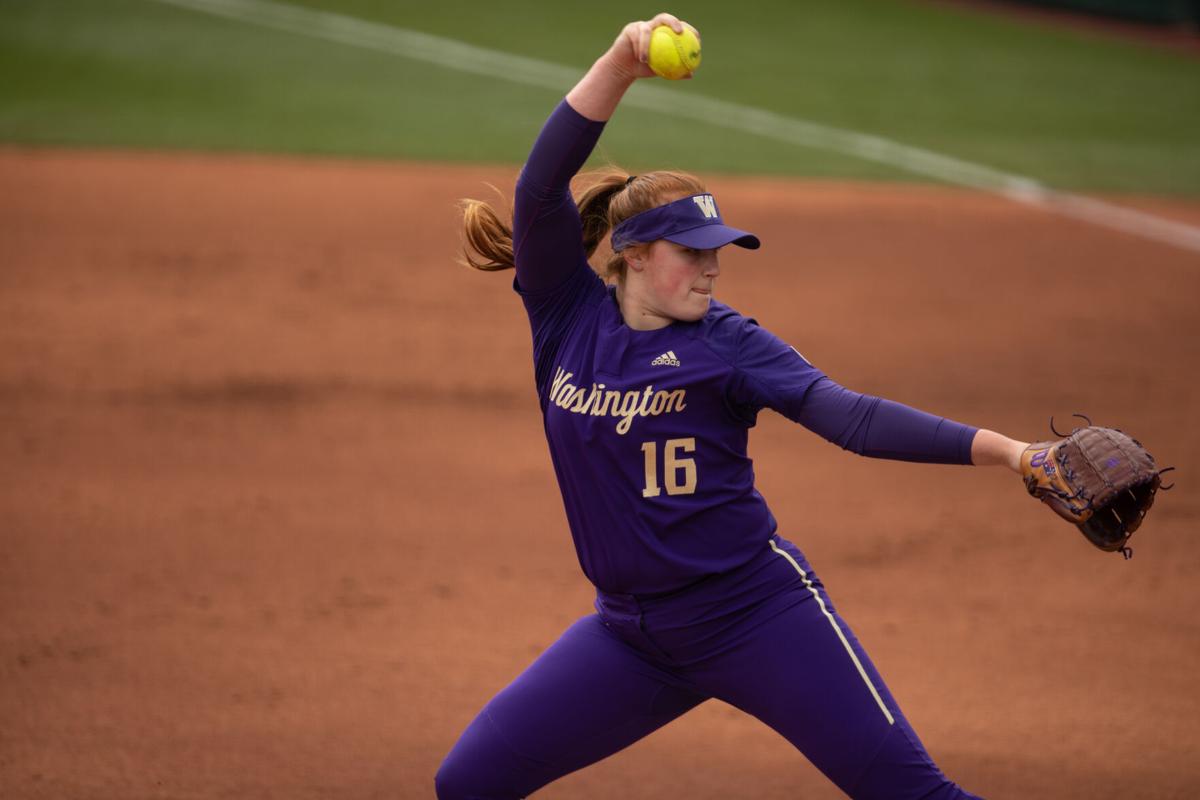 Senior Gabbie Plain pitches during Game 1 of Washington's doubleheader against Cal on April 2nd, 2021 at Husky Softball Stadium. Plain led the Huskies with a 1.45 ERA and 337 strikeouts this season. 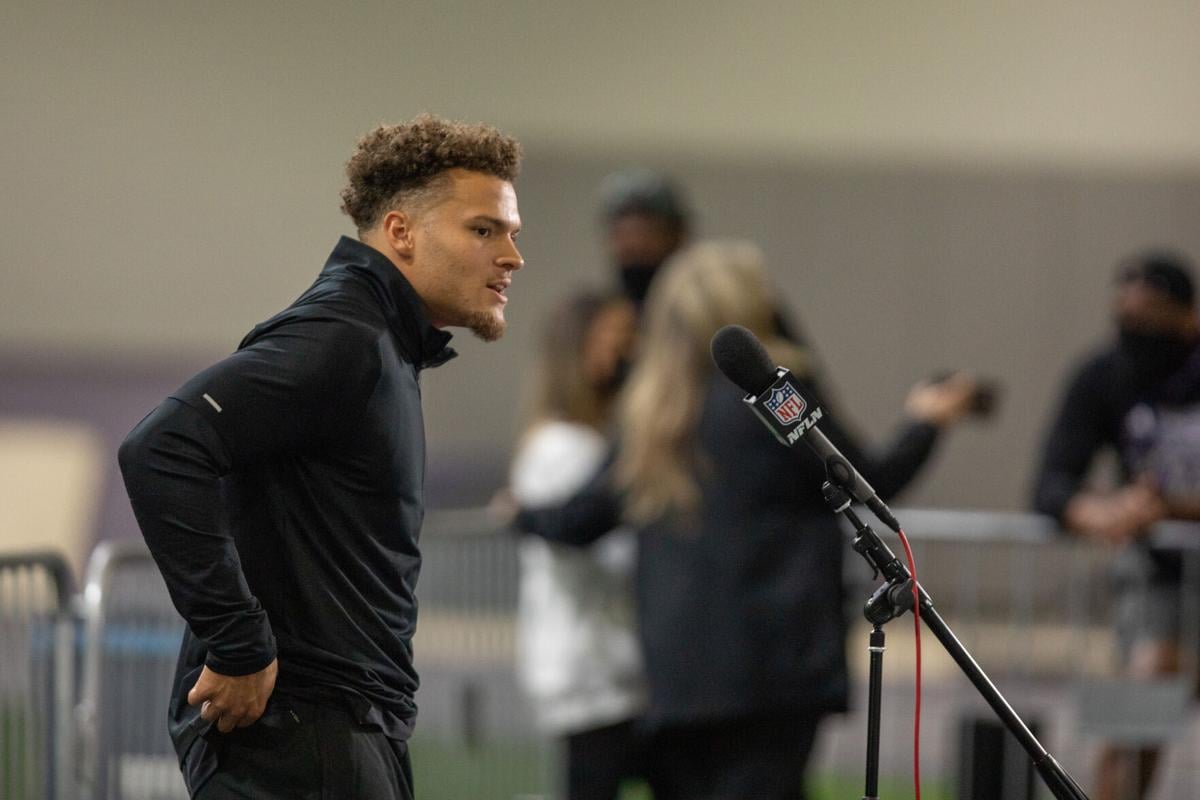 Elijah Molden speaks with NFL network following his Pro Day performance at Dempsey Indoor Center on March 29th, 2021. Molden was selected in the third round of the 2021 NFL Draft by the Tennessee Titans after completing his senior season at UW. 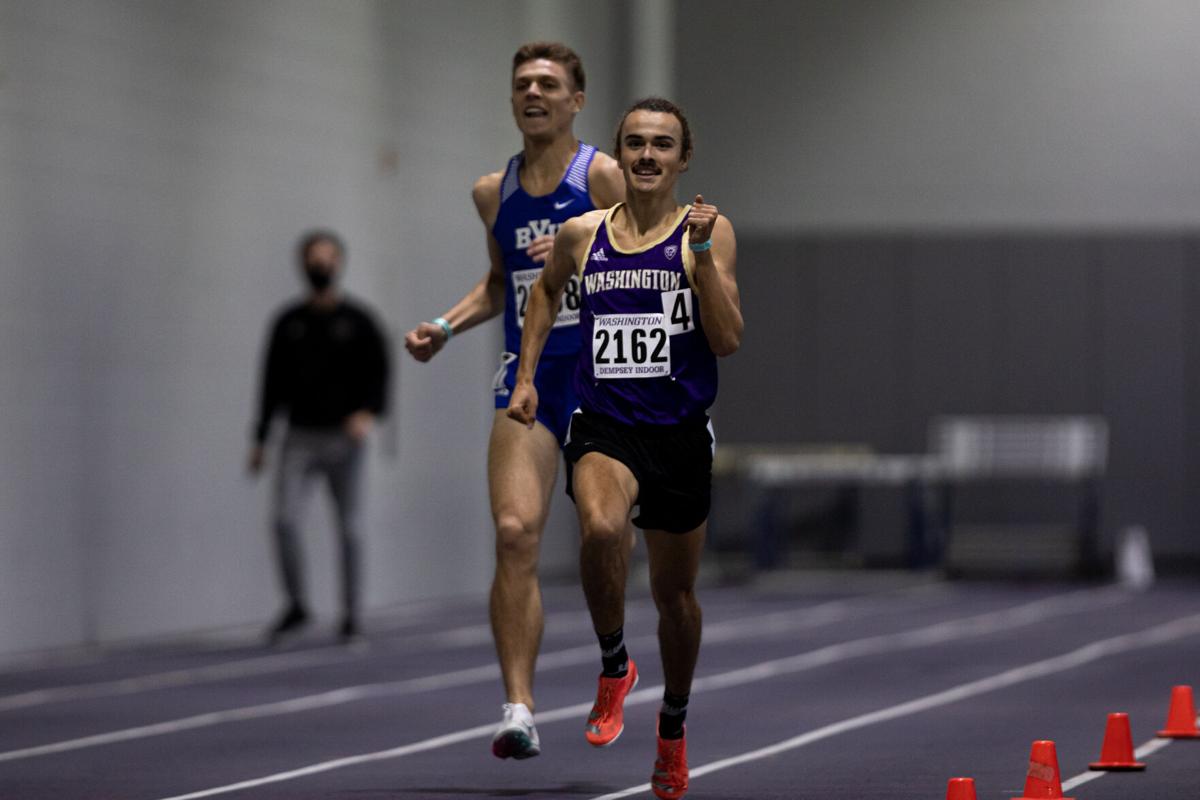 Sam Tanner runs down the final stretch to take first in the mile during the Husky Classic at Dempsey Indoor Center on Feb. 27, 2021. Tanner will represent Team New Zealand in the 2020 Tokyo Olympics this summer. 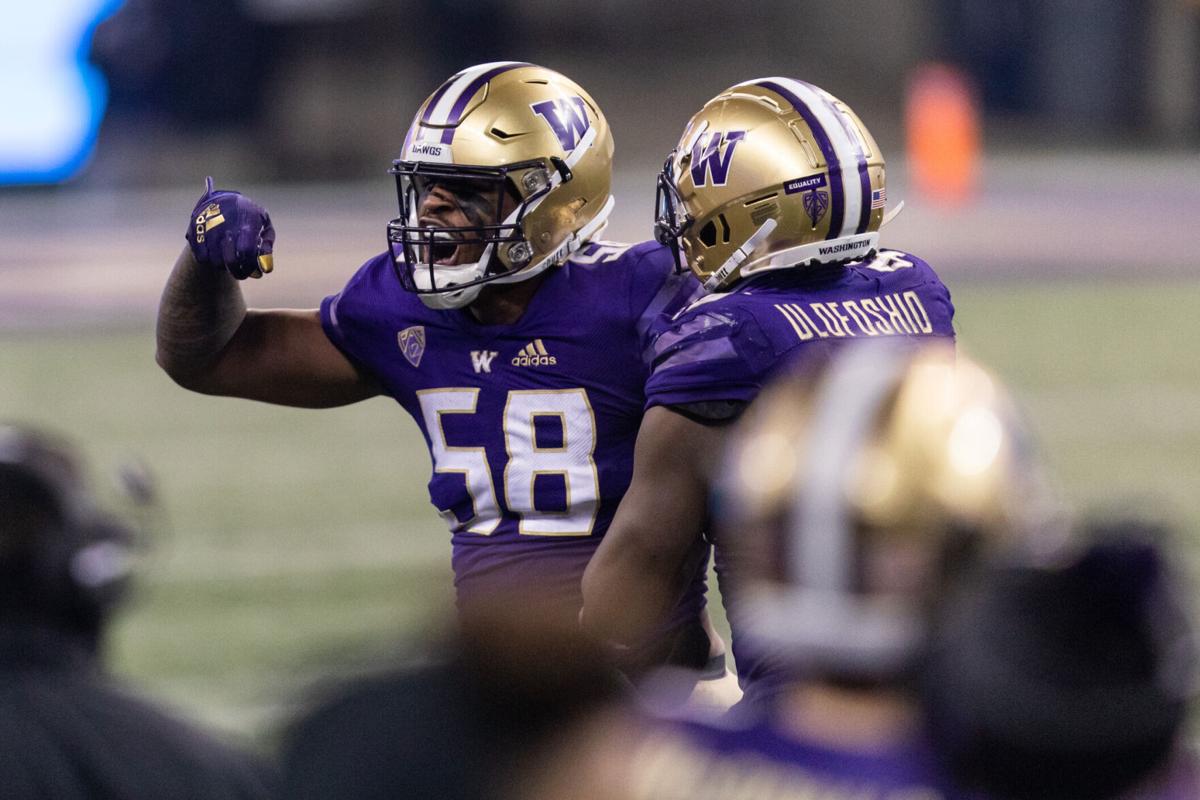 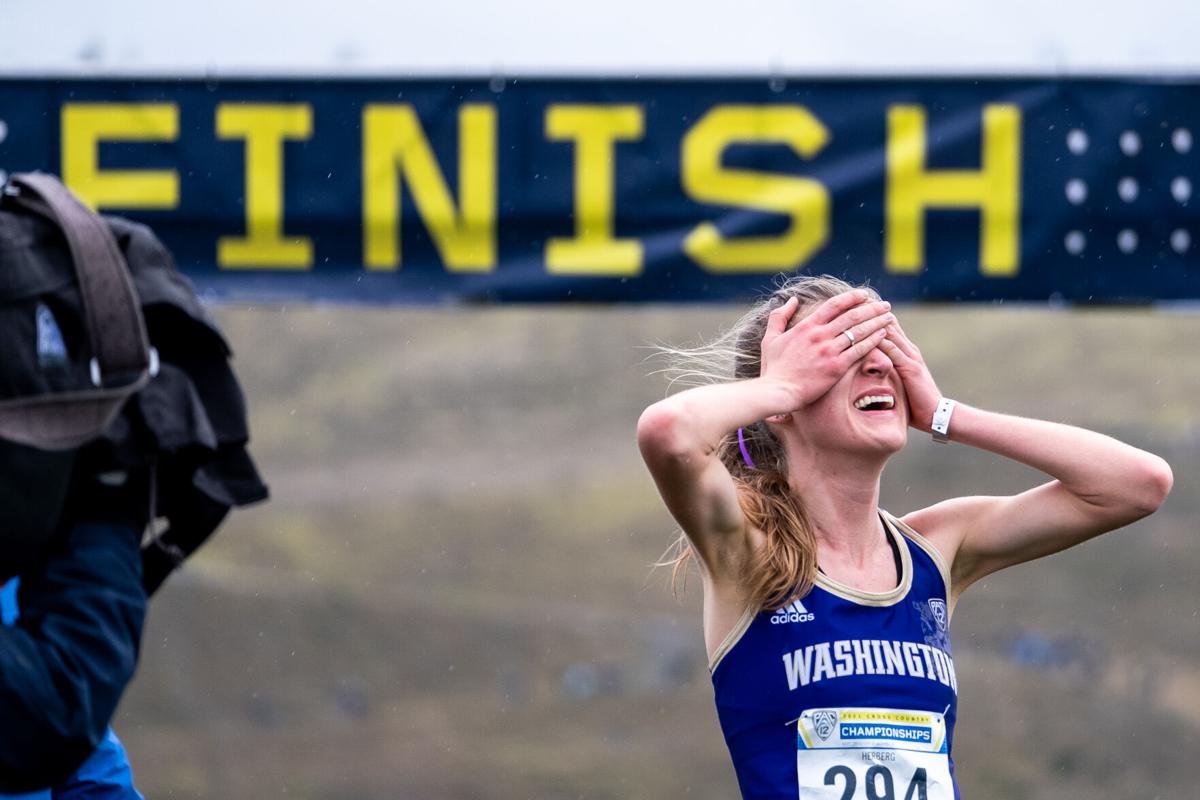 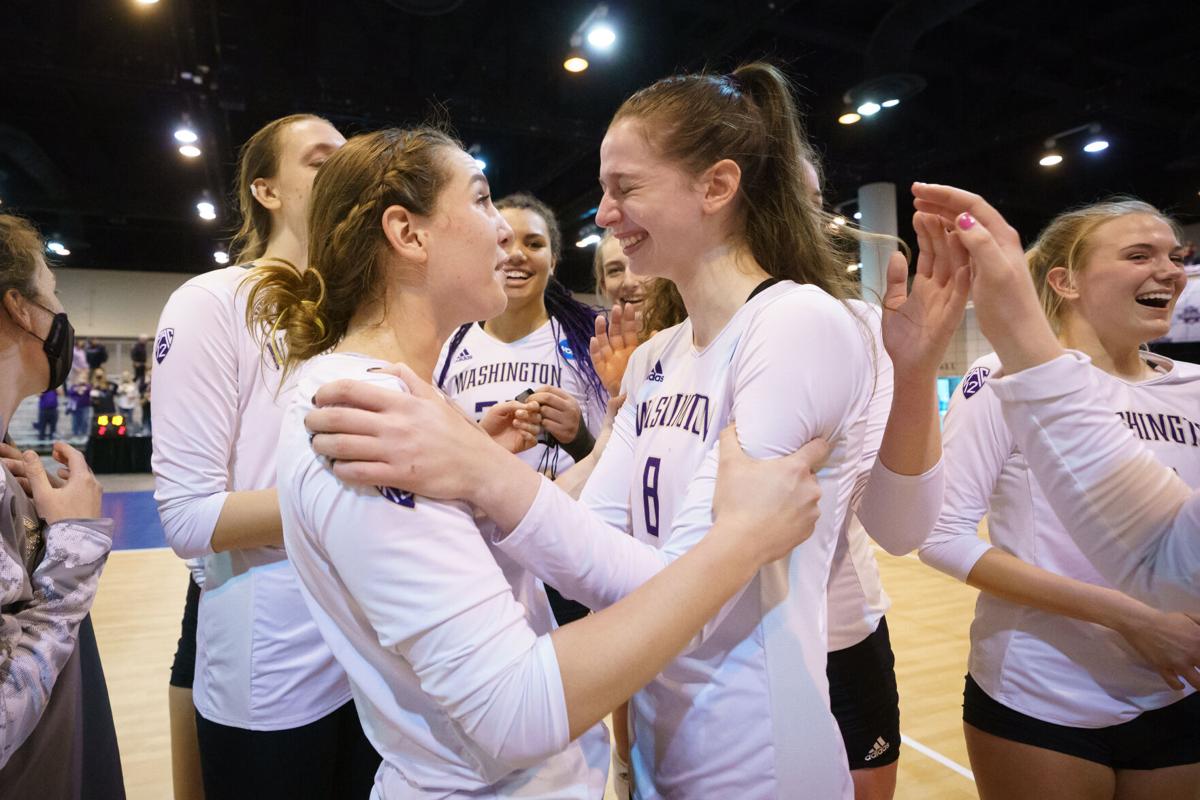 Maria Bogomolova celebrates after Washington's win against Louisville in the Division I Women’s Volleyball Tournament. Bogomolova's services aces sparked a massive comeback in the fifth set to help the Huskies reach the Elite 8. (Photo by Mark Kuhlmann/NCAA Photos) 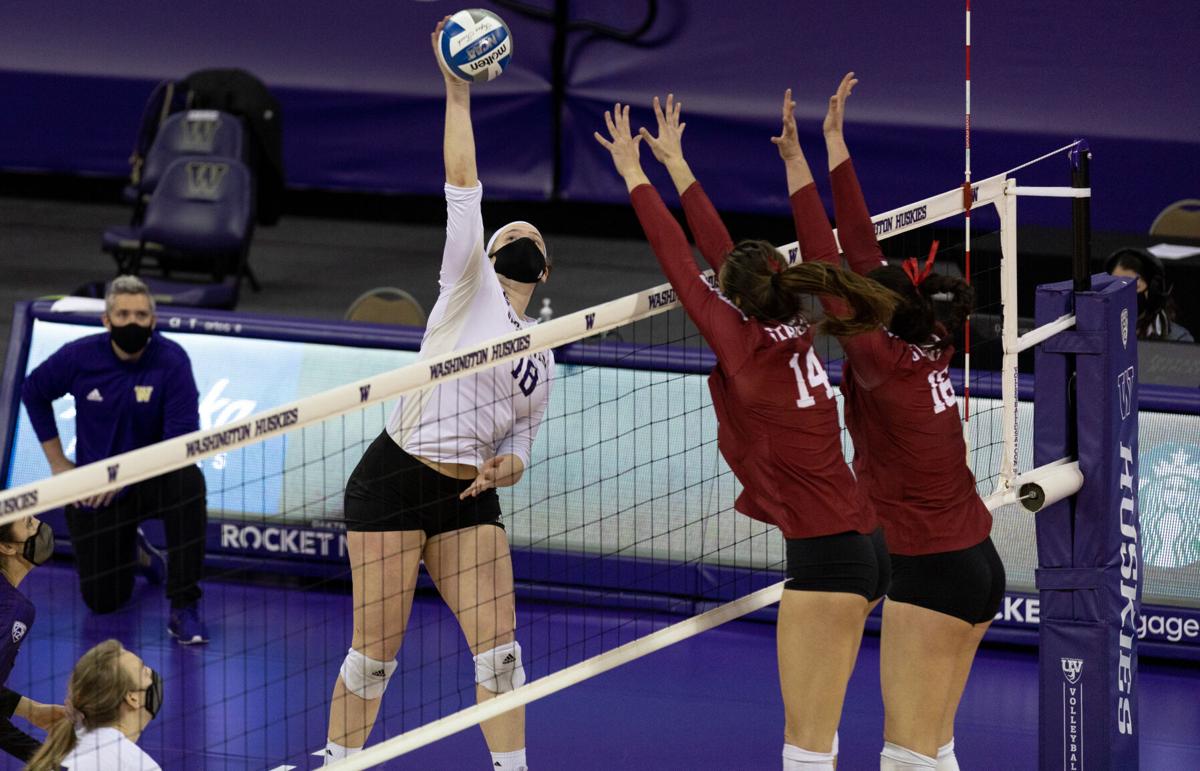 Freshman outside hitter Madi Endsley spikes the ball in Washington's 3-2 win over Stanford at Alaska Airlines Arena on March 28, 2021. Endsley helped lead the Huskies to their first Final Four appearance since 2013 with an impressive freshman campaign in which she earned Pac-12 Freshman of the Week three times.

An action-packed spring season capped off a hectic year for UW Athletics, where 17 teams navigated sport seasons during the COVID-19 pandemic. Here are The Daily sports staff’s picks for best athletes, performances, and moments from the past year.

After just a month-long season in 2020, Gabbie Plain didn’t let the time off from softball slow her down in 2021. The senior pitcher posted one of the best seasons for a Washington softball player in history, leading the nation in strikeouts through the regular season, eventually being named as one of the top three players in the country by USA Softball.

Plain won Pac-12 Pitcher of the Year and had there been such an award on the national level, Plain’s chances would have been better than most, posting a 32-4 record with a 1.45 ERA in 237 1/3 innings.

Plain’s performance of the season came when she was needed most, in the Seattle Regional versus Michigan. After tossing nearly 300 pitches over the course of 48 hours, Plain trotted out to face the Wolverines in the elimination game. It looked like all of the Huskies’ hopes had vanished, as Plain allowed the Wolverines to take a 5-1 lead after two innings, but she then bounced back by shutting down Michigan over the final five frames, sending Washington to the Super Regionals with a 10-5 win.

She will return to Washington in 2022 as a fifth-year senior after representing Australia in the Tokyo Olympics this summer.

Although the Washington football season was unusually short, the Huskies were able to create some fond memories during the four-game 2020 season. Senior nickelback Elijah Molden’s flashy plays on defense, including a key interception in UW’s game against Utah, helped the UW start the Jimmy Lake era by winning three games in a row.

Not only was the senior captain an important piece of the UW defense, but he was nationally renowned. Following the season, Molden was named to the All-Pac-12 First Team and was All-America Second Team by Pro Football Focus.

Molden was also impressive off the field. He was All-Pac-12 Academic Honor Roll and took home the Tom Hansen Medal from the Pac-12 as Washington’s outstanding male for scholarship, athletics, and leadership.

He was selected in the third round of the 2021 NFL Draft by the Tennessee Titans.

The spring volleyball season couldn’t have gone much better for freshman outside hitter Madi Endsley, who was named to the Pac-12 All-Freshman team before the team secured the Pac-12 Championship title and advanced to the Final Four of the NCAA Tournament.

As the only underclassman with substantial playing time, Endsley more than proved herself to be a force on the court for the successful team. She led hitting in five of the Huskies’ matches, finished the season third in kills with 258, and finished fifth in blocks.

Endsley was named Pac-12 Freshman of the Week three times during the season.

She and nearly the entire team will be back in the fall, putting Washington in great shape to repeat last year’s success. With at least three more years of playing time available and a taste of tournament wins, there is little doubt Endsley will be a power on the team to look forward to.

Collegiate record, Olympic qualifier, and All-America Second Team: Sam Tanner’s first full season in the purple and gold was full of accomplishments after his true freshman year was cut short due to COVID-19 pandemic.

Intense training in his home in New Zealand paid off big for Tanner, as he set the collegiate record for the 1,500 meter in his first meet back in the United States with a time of 3:34.72 in the New Balance Grand Prix. The time also earned him a spot on New Zealand’s Olympic team for Tokyo 2020.

Although Tanner was unable to match or eclipse his collegiate record during the NCAA outdoor season, he still made the finals of the NCAA Championships and finished in 10th place.

The outside linebacker proved exactly why Lake was so high on him, bursting onto the scene in a major way in just four games. He recorded seven sacks, all of which came in the first three games, for which he was named the Pac-12 Defensive Lineman of the Week for those three performances.

His 1.75 sacks per game led the NCAA and he eventually earned All-Pac-12 First Team honors in addition to All-America Second Team by numerous outlets.

Tupuola-Fetui performed so well, in fact, that fans are more likely to hear his initials, ZTF, than his last name itself.

Unfortunately for Tupuola-Fetui, he will miss a good portion of the 2021 season, if not all of it, after injuring his achilles during spring practice.

Performance of the Year: Haley Herberg’s wire-to-wire victory at the Pac-12 Championships

Running in the rain at Chambers Creek Park in University Place, Washington, Haley Herberg rushed out to the lead in the Pac-12 Cross Country Championships. She never looked back, as the junior earned an individual championship with an impressive wire-to-wire victory.

Herberg sprinted out to lead the pack, kicked into an extra gear through the first few kilometers, and eventually carried a lead of 50 meters into the 10-kilometer race. But Herberg became a target for runners trailing her, as she was eventually caught by Stanford’s Ella Donaghu with less than a minute left in the race.

But Herberg displayed more endurance, not allowing Donaghu to pass her, and eventually winning the race by 6.5 seconds with a time of 19 minutes and 2.5 seconds.

In the track and field season, Herberg earned third place in the 10k at the Pac-12 Championships.

Moment of the Year: Bogomolova’s inspirational comeback vs. Louisville

Before Maria Bogomolova stepped on to serve during Washington volleyball’s fifth set against Louisville, it looked like the season would end in the Sweet 16. Down by six and struggling to find a rhythm, Washington sent in the senior, who ended up powering the UW to a 10-2 comeback run.

The Huskies managed to come back together as Bogomolova nabbed two aces and Claire Hoffman and Marin Grote found kills. The Huskies pulled back from a 11-5 deficit to a 15-13 win.

Bogomolova was the only departing member of the team, and a loss would’ve made the Sweet 16 her last match in the purple and gold. She exited the court nearly in tears and was immediately hugged by head coach Keegan Cook.

“I think that's up there, if not number one,” Cook said. “Just a combination of the moment and the quality of the opponent. Just really proud of our team.”

The Huskies went on to advance to the Final Four of the tournament for the first time since 2013 before losing to the eventual national champions, Kentucky.