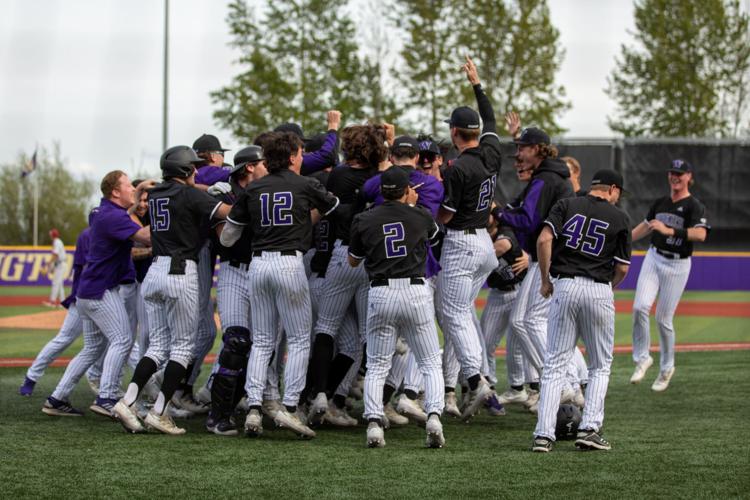 The Washington baseball team celebrates after a win against No. 6 Stanford on May 1st, 2022. The Huskies broke their long losing streak a day prior. 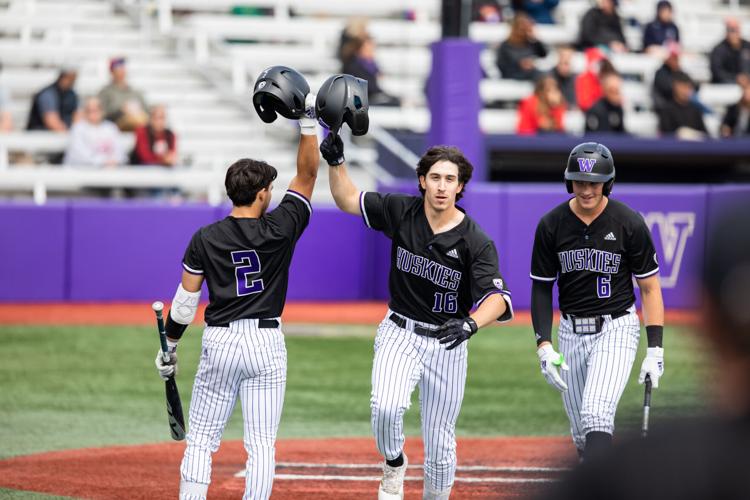 Trailing 10-8 in the bottom of the ninth inning, the Washington baseball team only had one option to pull off the improbable against No. 6 Stanford Sunday afternoon.

UW loaded the bases with just one out before freshman Colby Wallace ripped a single to cut the deficit to one, and left the bases full for redshirt senior Josh Urps in a make-or-break plate appearance.

Urps was in a potentially heroic position, after a home run in the bottom of the seventh — the first of his career — jump started a Washington rally. But with the game on the line, Urps patiently drew a 3-2 count before being hit by a pitch, and his third RBI of the day may not have come conventionally, but it tied the game at 10 in the highest leverage of situations.

For the second time in three innings, UW had come back, and had a chance to complete the upset victory with junior McKay Barney at the plate.

But Barney wasn’t given much of an opportunity, as a wild pitch squirted away from the Stanford catcher.

Senior Ben Smith made a beeline for home plate, sliding home for the walk-off run in the bottom of the ninth. Washington mobbed Smith in jubilation of an 11-10 victory in front of a lively Husky Ballpark.

“We just never quit. We had a great dugout, we had great energy today,” Meggs said. “So I give our hitters credit to stay with it.”

Before the final innings, Stanford and Washington traded runs in the bottom of the second, the latter coming via a solo home run from freshman AJ Guerrero, but the potent Cardinal offense put the Huskies in a hole in the top of the third.

The Cardinal weren’t finished, as they hit another RBI double in the frame, and followed with two more runs in the top of the third to open a 7-1 lead.

With Stanford controlling the game in its clutches, Washington retaliated with two runs in the bottom of the third, an RBI single from Guerrero and an RBI double from redshirt sophomore Johnny Tincher to make it 7-3.

UW redshirt junior reliever Stefan Raeth shut down the stout Stanford bats for the following three innings, and the score remained 7-3 entering the bottom of the seventh.

With no outs and one man on base, Urps selected a good time for his first career home run, a 2-RBI shot that would kickstart a Huskies’ seventh inning rally.

“I was just looking for a fastball out over the plate and trying to get my barrel out.” Urps said. “I wanted to get barrel on it and just see what I could do. I know I’ve been struggling a little bit, but it’s for the team and that’s what it’s all about.”

The blast sparked a UW rally, as Barney and freshman Cam Clayton reached base consecutively to apply pressure on Stanford.

The Huskies followed with three consecutive singles, RBIs from redshirt sophomore Will Simpson, Guerrero, and Tincher, and the five-run inning gave Washington a miraculous 8-7 lead.

But Stanford is nationally ranked for a reason, and took the lead back in the top of the eighth with two singles and a triple before UW could record an out.

They brought more across in the top of the eighth, and after scoreless frames in the bottom of the eighth and top of the ninth, the stage was set for the miraculous ninth inning finish.

Urps and Guerrero each finished with three RBIs, while Tincher tacked on two.

It was a series victory for Washington after it defeated Stanford on Friday night 4-3, its first series win in Pac-12 play since a sweep of WSU in mid-March.

UW baseball season comes to an end in Pac-12 Tournament