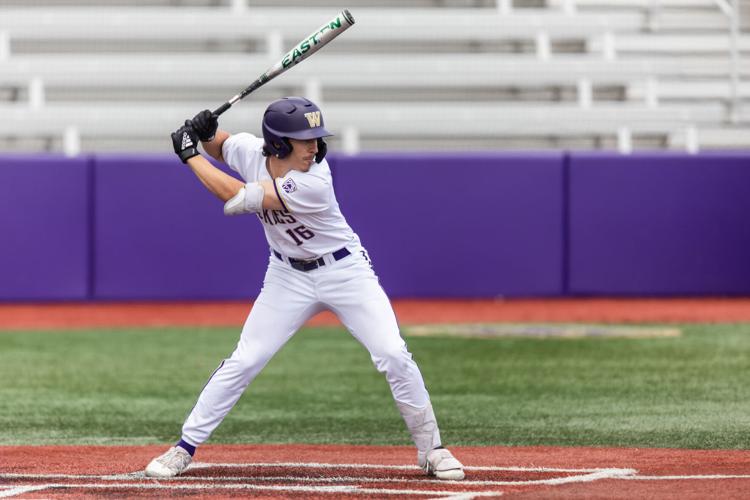 AJ Guerrero prepares to swing during Washington's first game of a doubleheader against Northern Colorado at Husky Ballpark on May 20. The Huskies have now won 11 games in a row after winning both games Friday against the Bears. 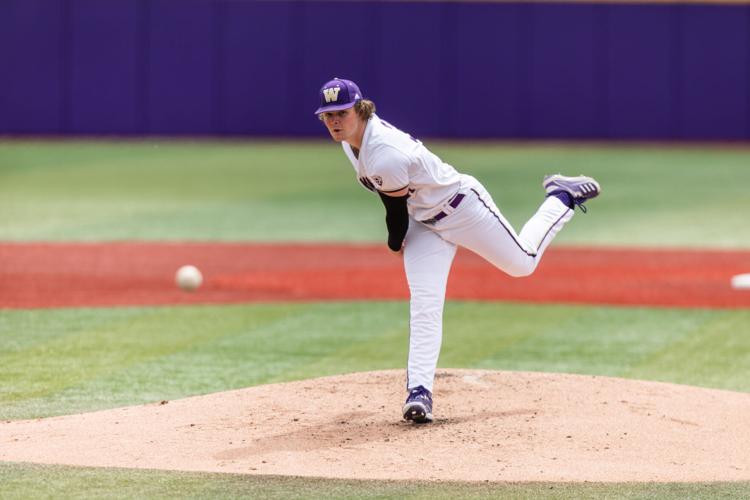 Adam Bloebaum watches his pitch during Washington's first game of a doubleheader against Northern Colorado at Husky Ballpark on May 20.

Two weeks ago, that may have read as an ill-intended punchline. Friday afternoon at Husky Ballpark, it became reality with a doubleheader victory in commanding fashion over Northern Colorado.

If UW was looking to stay in form ahead of postseason play, Friday's Game 2 was a good benchmark as the Huskies busted out of the gate for 10 first inning runs en route to a 16-6 victory at Husky Ballpark.

It was a mismatch from the start, as the bottom of the first inning quickly became littered with Northern Colorado errors, and UW batted around the order with ease.

UW sophomore starting pitcher Calvin Kirchoff hardly had to break a sweat, as Guerrero added another 2-RBI double in the second inning, and the 14-2 lead after just two innings had put the game well out of reach.

Washington relented somewhat in the following innings, adding on two more runs in a game that saw 19 different position players take the diamond.

The Bears (12-38, 8-16 Summit) put across a few late runs of their own, but it could hardly put a dent in the lead, leaving the Huskies with yet another victory.

Guerrero and the team find themselves at an all-time high after their 12th win in 14 games, continuing its run that began with a late-April series victory over Stanford. And while the rest of the conference may take Washington’s sprint to the finish line by surprise, the Huskies themselves are not shocked.

“Since playing Stanford, we won the first game and we lost the second and then walked off the third, and then we were just kind of like, there’s nothing we can’t do,” Guerrero said. “Just kind of what it feels like. After we swept UCLA, it’s kind of the same feeling like, ‘We can do that, what else can we do?’”

While the final series of nonconference play has no bearing on conference standings, it has provided value for the Huskies ahead of the Pac-12 Tournament in Scottsdale, Arizona next week.

“[We’re] just trying to get a good feeling ahead of next week, and try to win a Pac-12 championship,” Guerrero said.

The first game of the doubleheader was slightly more tame from the Washington side.

The Huskies didn’t score 16 like they did in Game 2, nor did they score 20 à la Thursday night. They did, however, shut out the Bears in a 5-0 victory to push their win streak to 10.

The Huskies gave Bloebaum early run support with a 2-RBI double from Guerrero in the bottom of the first, and that was all that was needed to position Bloebaum (2-2) for a victory.

Bloebaum held the 2-0 lead for four innings, before UW finally added to its lead in the bottom of the fourth.

Redshirt sophomore Johnny Tincher scored two runs with an RBI double, and Guerrero recorded his third RBI of the day with a single to make it 5-0.

“I’m just trying to stay [in] the middle of the field and keep the ball low line drives,” Guerrero said.

Bloebaum was removed after five innings, surrendering just three hits and no runs, and the Huskies were left well in line for a victory.

With the seven-inning doubleheader abbreviation, it took just two innings from the UW bullpen to lock down the win.

The two victories on the day put the Huskies five games over .500 for the first time since 2019. A win Saturday would give them 30 wins, matching the regular season total from the program’s college world series season in 2018.

As the regular season ends and the postseason play approaches, the goal for the Pac-12 tournament remains clear.

Washington will host Northern Colorado once more to end the series and regular season, Saturday, May 21, at 1:05 p.m.

UW baseball season comes to an end in Pac-12 Tournament