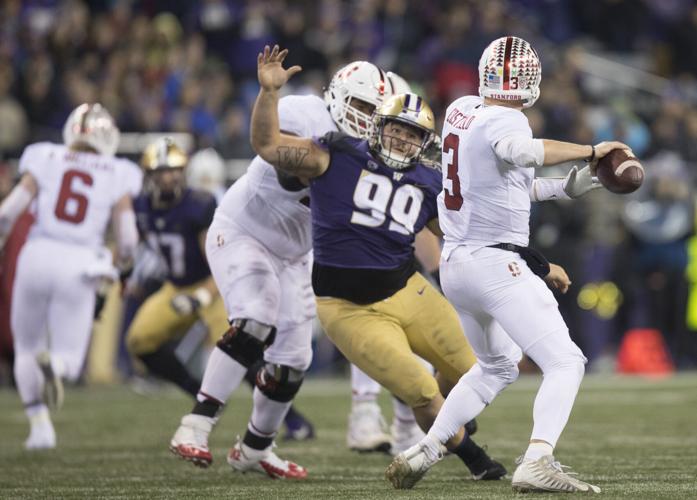 Greg Gaines pursues a sack in a 2018 Washington vs Stanford game at Husky Stadium. The Huskies and Cardinal are tied in the all-time series, 44-44-4. 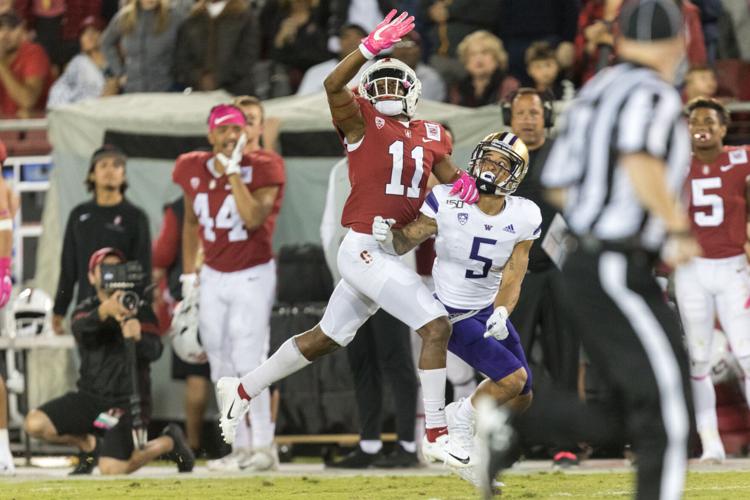 Stanford's Paulson Adebo reaches over Washington's Andre Baccellia to try to block a pass from Jacob Eason in the first half of Washington’s game against Stanford at Stanford Stadium on Oct. 5, 2019. Huskies fans wanted pass interference to be called on Adebo, but the officials disagreed. The Cardinal won the game, 23-13.

Dating back to 1893, Washington’s history with Stanford is the longest the Huskies have with any active opponent. Fast forward to 2022, and the all-time series between the Huskies and Cardinal is tied at 44-44-4. With Saturday’s matchup determining a series leader, The Daily looks at the previous six matchups between the two teams, which, much like the overall series, is split evenly between UW and Stanford.

On the day before Halloween, Washington didn’t have many tricks up its sleeve to spark its lifeless offense, which had been the main culprit in the Huskies’ 3-4 start to the season. There weren’t too many treats, either, as UW went cold after gaining a 9-3 lead, and Stanford ended up with a 13-12 advantage in the fourth quarter.

One rare treat on the night — and the 2021 season for that matter — came with 21 seconds left, when receiver Jalen McMillan caught a 20-yard touchdown pass from quarterback Dylan Morris in the back corner of the end zone. Running back Giles Jackson ran in the two-point conversion, and the Huskies escaped with a 20-13 win on the farm and the final win of the 2021 season.

Entering their fourth game of a pandemic-ridden 2020 Pac-12 season, the Huskies were riding high after a comeback victory over Utah, improving their record to 3-0 and catapulting to a No. 22 national rank.

Their opponent, on the other hand, the Cardinal, weren’t having as great of a week. Due to a myriad of COVID-19 concerns and regulations, Stanford held its Friday walk-through practice at Bellevue Downtown Park. It didn’t seem to bother the ever-prepared Cardinal, who ran their way to a 24-3 halftime lead.

The Huskies made a mad dash in the fourth quarter, and whittled the deficit to 31-26 courtesy of long completions to receiver Ty Jones and tight end Cade Otton, as well as a forced fumble by cornerback Trent McDuffie. The imaginary fans in Husky Stadium, however, had their excitement stamped out when a methodical Stanford oozed out the final 7:54 of the game, dealing Washington its first (and only) defeat of the 2020 season, in what would become its final game.

Stanford, leaning on backup quarterback Davis Mills, and later in the game, its third-string QB, wore down UW with its run game, consistently gaining intermediate intervals of yardage and controlling the time of possession.

Running back Cameron Scarlett carried the ball 33 times for the Cardinal, who held the ball for a total of 39 minutes, nearly twice as long as the Huskies’ 21 minutes. Quarterback Jacob Eason and the Huskies couldn’t find the end zone for the remainder of the game after scoring a touchdown on their first drive, as they were completely stymied by the Cardinal.

The final score of 23-13 left No. 15 Washington scratching its head, as Stanford had an answer for everything the Huskies threw at them.

The Huskies could not have scripted a much better first 18 minutes of their 10th game in 2018. They forced two interceptions and scored touchdowns on each of their first three drives to take a commanding 21-0 lead.

The second half, however, told a different story. Stanford slowly climbed back, and got the ball at its own 15-yard line with 2:05 remaining. The Cardinal drove down the field as the threat of an all-time collapse began to mount in Husky Stadium. But, on the last play of the game, safety Taylor Rapp alleviated those concerns with an interception in the end zone, sealing the 27-23 Washington win.

It was the first of four straight victories for the 2018 Huskies, who eventually earned a bid to the Rose Bowl after securing the Pac-12 championship.

The 2017 Washington defense was an immovable object through its first nine games of the season, having relinquished an astoundingly low 11.1 points per game. The Huskies’ stringent defense hadn’t been truly opposed all season, until Bryce Love entered the equation.

On a Friday night in Palo Alto, the Stanford running back bolstered his Heisman campaign, rushing for 166 yards on 30 carries, along with three touchdowns. When Love’s hat trick was complete, the Cardinal held a 30-14 lead in the fourth quarter. Huskies’ running back Myles Gaskin scored three touchdowns of his own, but all it did was narrow the final score to 30-22.

It was a crushing loss for No. 9 Washington, which had its hopes of reaching a second straight College Football Playoff dashed, and missed out on playing in the Pac-12 championship game due to Stanford holding the head-to-head tiebreaker.

2016 - Huskies send message in a night to remember

The stage was set. No. 10 Washington was back on the national scene, playing host to No. 7 Stanford in the first matchup between two top-10 teams at Husky Stadium since 1997.

In front of a packed crowd, the Huskies did not disappoint, and proved their legitimacy to the rest of the nation on a Friday night, storming to a 44-6 statement win. Quarterback Jake Browning threw for three touchdowns, Gaskin rushed for two, and Stanford’s star running back, Christian McCaffrey, was neutralized for just 49 yards on 12 carries.

The resounding win launched the Huskies to No. 5 in the polls, which paved the way for their College Football Playoff appearance and No. 4 final ranking.