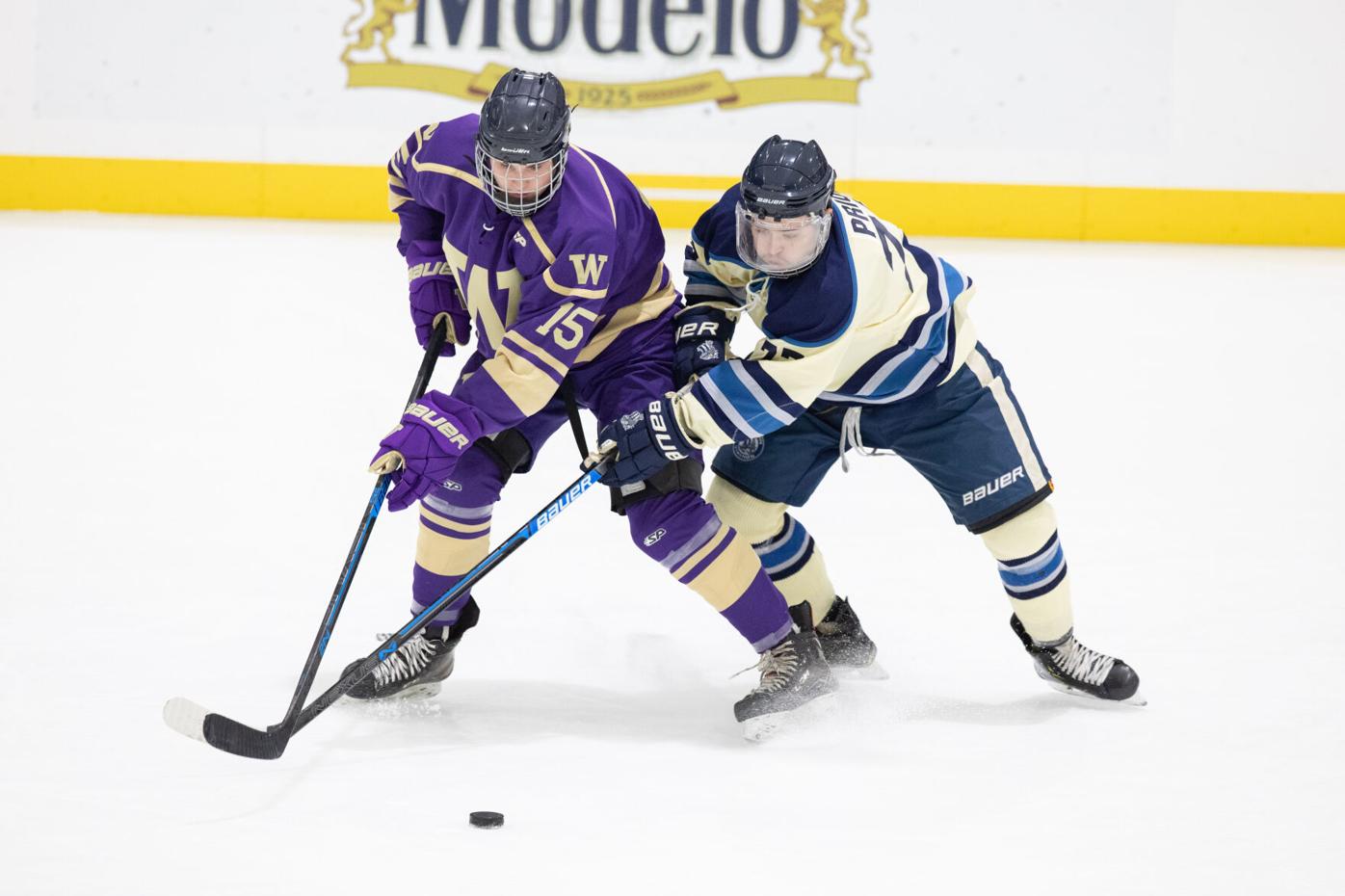 Ryan Featherman fights for the puck during the Washington ice hockey game against Western Washington on Oct. 15 at the Kraken Community Iceplex. 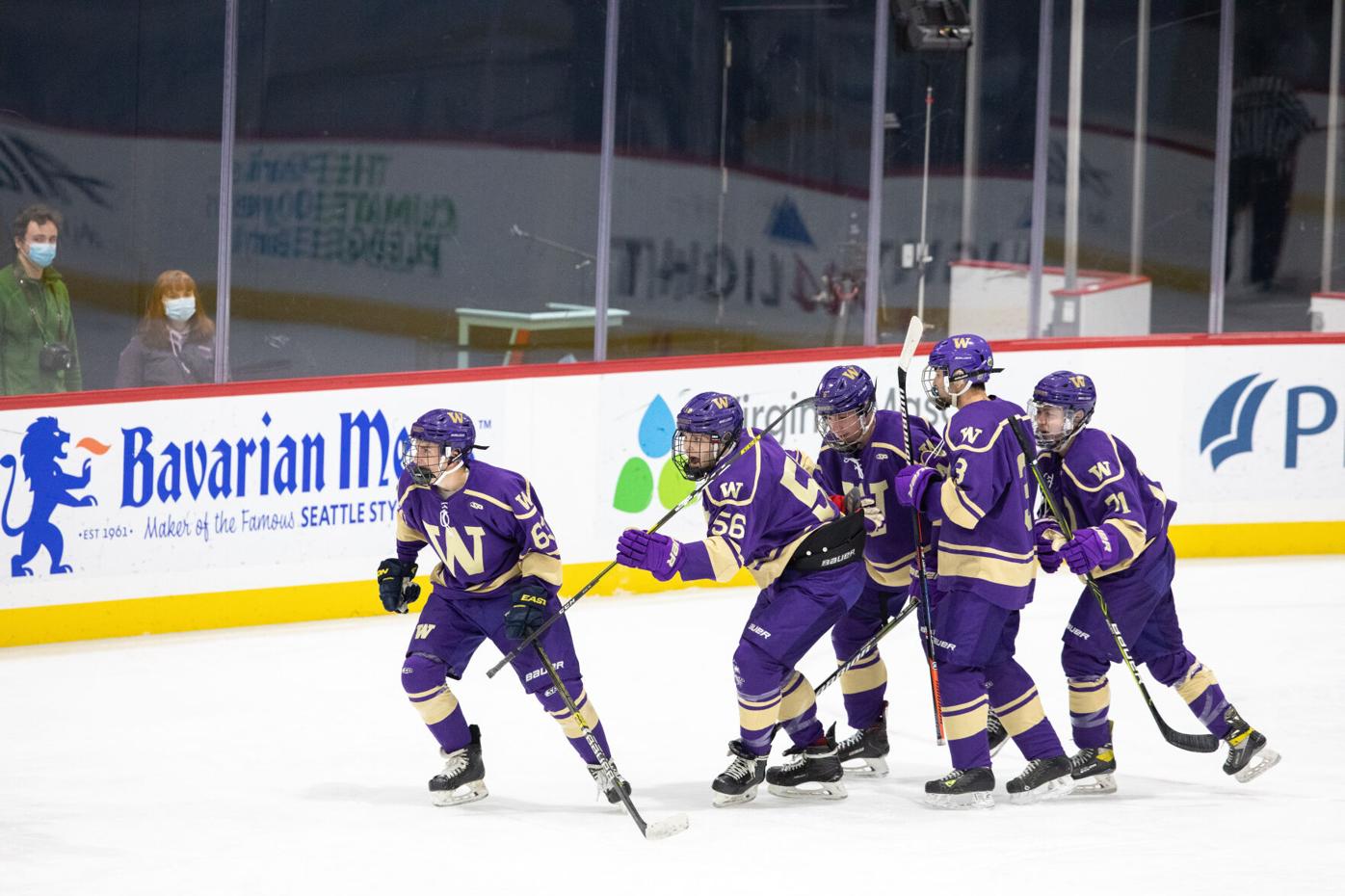 The Washington ice hockey team celebrates after scoring a goal against Western Washington on Oct. 15.

The most beautiful sound in sports is unequivocally the goal horn. Thanks to the arrival of the NHL’s Seattle Kraken, Washington hockey fans need not go far to hear the harmonic blaring.

The Washington men’s ice hockey team’s 2021-22 season has commenced and it can now call the brand-new Kraken Community Iceplex in Northgate its home.

Prior to the construction of the Kraken’s new practice facility, the Huskies were forced to travel 12 miles north to Mountlake Terrace for each of their home games at the slightly dated Olympicview Arena.

The players had grown frustrated with the commute and poor state of the older arena, growing more and more impatient for a new home.

Construction on the new arena bagan Feb. 27, 2020 with the grand opening taking place Sept. 10, 2021, and the facilities are in pristine condition. The UW players have taken notice, but the primary advantage for the Huskies comes with the ability of fans to come out in stronger numbers than ever before.

“It’s a great environment here at Northgate,” junior Aaron Morris said. “It’s a Link ride up so [it’s] a lot of fun. The commute is easy and it’s really easy to get up here and the facility is really nice.”

Since the cancellation of the 2020-21 club sports season, the Huskies have been riled up to finally get back out on the ice and to come back to a new and improved home arena — it couldn’t get much better.

The journey has been arduous for a team primarily funded by the players; while the university allocates a small amount of funds, the players pay to keep the team alive and travelling. This season, the squad is all-in, and has developed quite the mentality in the locker room.

“This is such a good group of guys,” Morris said. “There’s not one guy out here who’s out of place. We’ve got 30 guys, a bunch of practice guys… we’ve got a great leadership group and coaches, and I think through [COVID-19], it’s really helped us rebuild the program from what it was two years ago.”

The first puck drop for Washington came Oct. 1 as it took on Washington State in a two-game home series which it split. On Friday, The Daily headed to the Kraken Iceplex for the UW’s game against Western Washington.

In its fifth game of the season, Washington (3-2) welcomed Western Washington (0-2) to Seattle, eventually picking up an action-packed 10-4 victory.

The Vikings came out firing, scoring their first goal less than five minutes into the game, setting the tone early on. The Huskies soon leveled the game, followed by a sequence of goals and the first period finished deadlocked at 3-3.

The Huskies pulled away in the second period, scoring three unanswered goals, highlighted by a beauty from sophomore winger Max Arzumanov. Arzumanov picked the puck up midway, carrying it past a helpless Viking defenseman and skating toward the net. He switched the puck to his backhand, and shot it into the top left corner, punctuating a dominant second period of hockey for the Huskies.

“We bounced back because we’re the better team, period,” sophomore defenseman Cameron Jennings said. “The boys played hard tonight, it was inevitable that we got the [win] at the end of the day.”

A skirmish erupted at the end of the second frame, as a routine goalmouth scrum escalated as Western and Washington players alike began pairing off and engaging in small wrestling bouts — that is, until a Viking defenseman threw an elbow and things just got chippier.

The game was filled with penalties, with each team picking up at least 10 penalty minutes by the end of the second period and multiple five-minute majors.

“We responded well because we’re a physical team as well,” Jennings said. “We like to lay the body, we can take hits and make plays, that’s all that matters.”

The Huskies rounded out the third soundly, tacking on the final of their 10 goals on their second 5-on-3 power play of the night.

On Sunday, the UW again defeated WWU with a score of 6-3.

There are plenty of chances to catch the Huskies in action, as the team will play regular season games until Jan. 29, 2022. The UW will play its next home series against Montana, as the Grizzlies come to town on Halloween weekend with the first of the two matches on Friday, Oct. 29 at 7:30 p.m. at Kraken Community Iceplex.