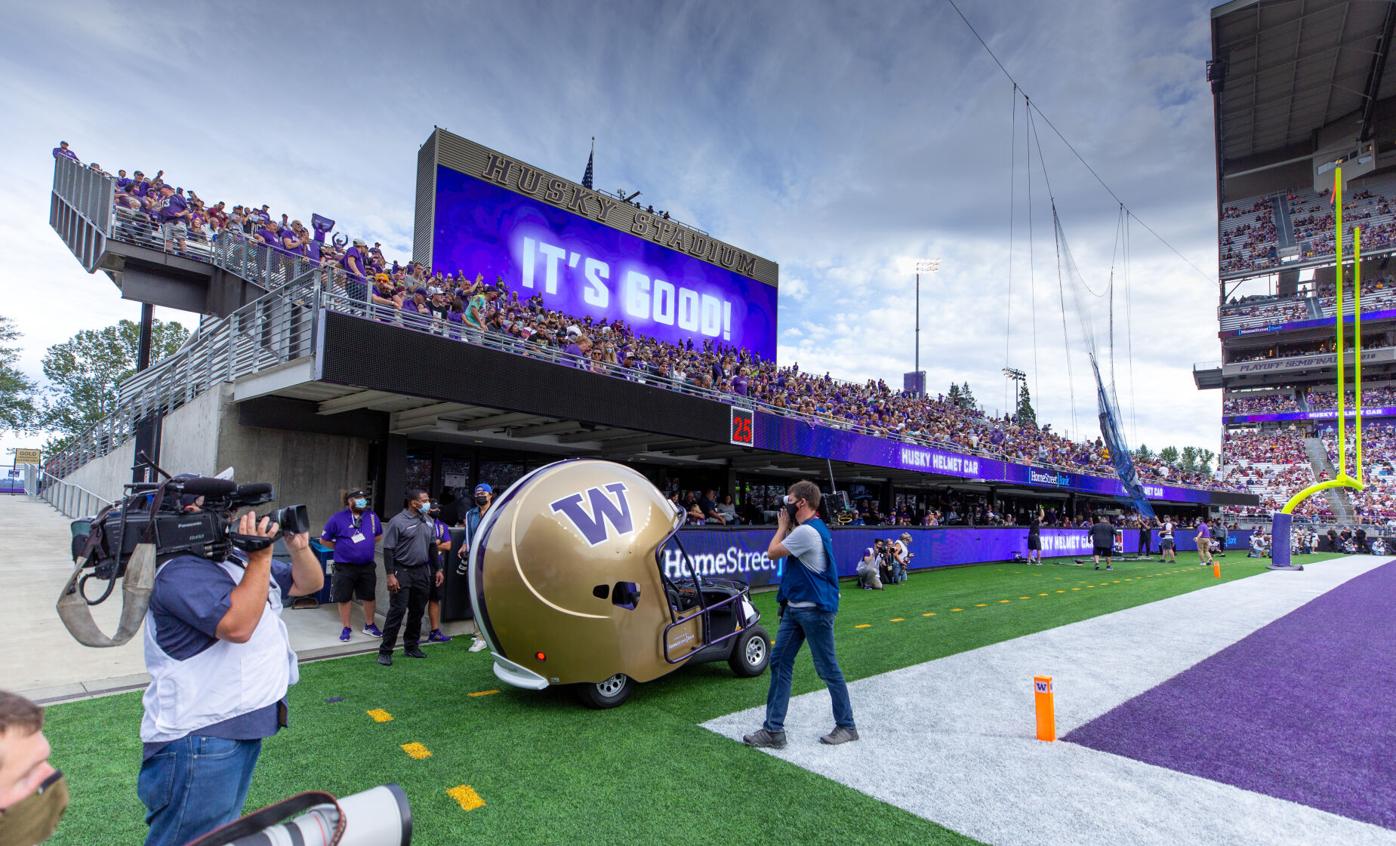 The Husky Helmet Car returned after a decade-long absence during Washington’s game against Montana on Sept. 4. Washington is hosting its homecoming game this Saturday, Oct. 16 and is highlighting many traditions to honor the 30-year anniversary of the 1991 National Championship. 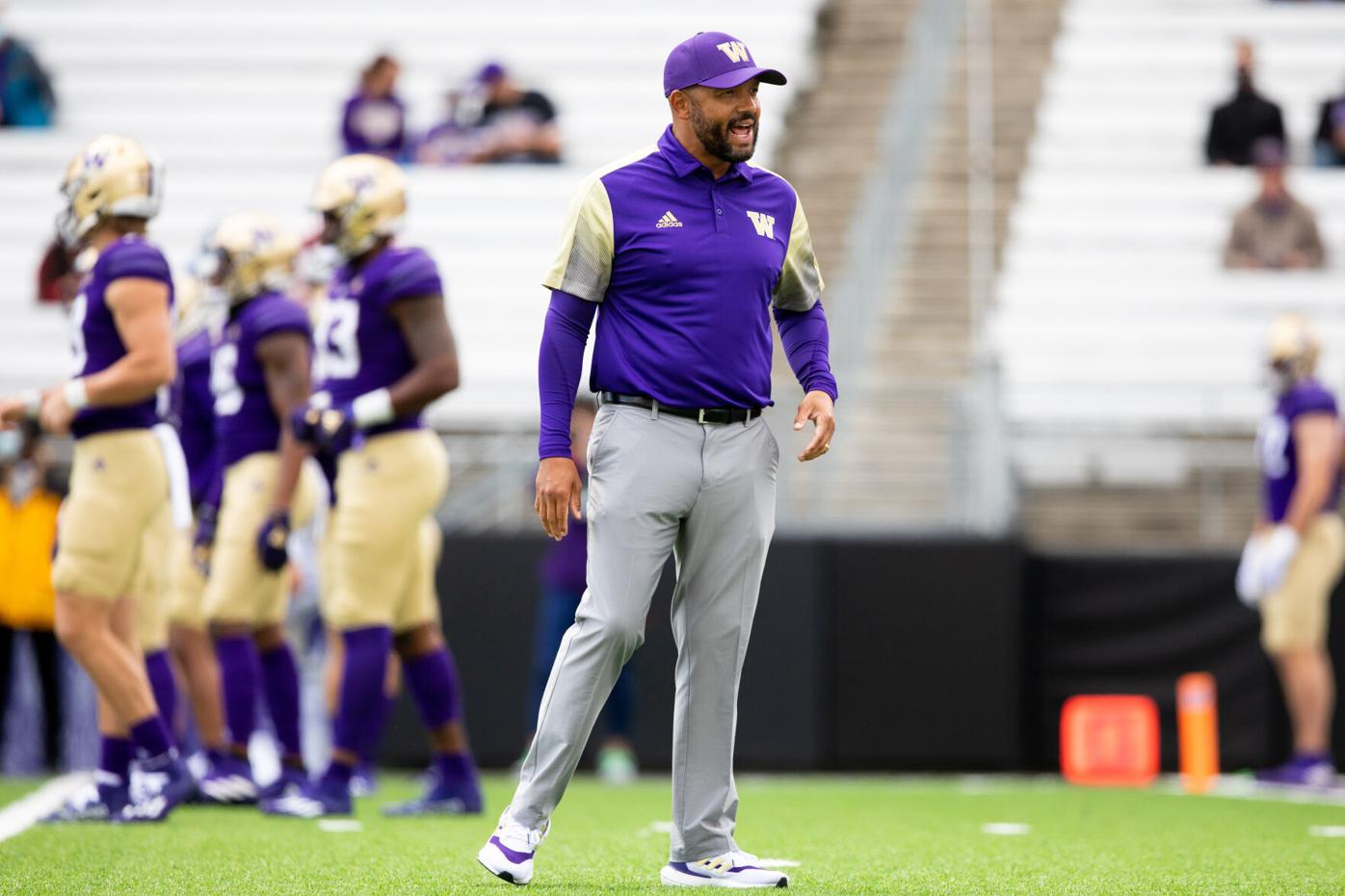 Washington head coach Jimmy Lake talks to his players before the UW's game versus Arkansas State at Husky Stadium on Sept. 18. Lake has been a big supporter of many Washington traditions this season, including throwback uniforms, the Husky Helmet Car, and the marching band.

On Montlake, a lot has changed in 30 years.

Since Don James guided the Washington football team to its 1991 National Championship, seven different men have coached the Huskies. They suffered through a winless season, tore down their stadium then rebuilt it, and even changed their logo — and apparel brand — countless times.

But in those 30 years, the tradition for Husky football has remained the same. As the Washington fight song goes, “Mighty are the men who wear the purple and the gold.”

To second-year head coach Jimmy Lake, the foundation of Husky football goes a long way in the vision of the program he is trying to sell.

“This university has a lot of tradition and a lot of history,” Lake said. “I want to make sure our players know what it means to wear that jersey and wear that helmet. This is a proud football alumni, this is a proud university.”

Washington hosts its homecoming game this Saturday against UCLA; on the 30th anniversary of its national championship, the Huskies will wear throwback uniforms to honor the special 1991 season.

“I know our players are excited to wear the throwback uniforms and throwback logos,” Lake said. “Just the nostalgia of the logo and the old uniform dating back to our best year in the history of Husky football will be special to our former players, and of course, Husky nation.”

Although Lake emphasized the importance of honoring those who laid the foundation for today’s Washington football, the homecoming game will be important to one player in particular: junior offensive lineman Jaxson Kirkland.

"Just the nostalgia of the logo and the old uniform dating back to our best year in the history of Husky football will be special to our former players, and of course, Husky nation."

From 1988 to 1990, Kirkland’s father Dean was a starting offensive lineman at Washington and even wore the same number 51 that his son wears today.

“Talking about surreal, I’m fired up,” Kirkland said. “I’m looking forward to wearing the same number as him. Sheesh, that’s gonna be a very cool Saturday.”

The throwback uniforms aren’t the only part of the UW tradition that Lake has emphasized as head coach. After the Husky band missed out on the 2020 pandemic-affected season, the UW head coach made sure that his team knew how important the band would be when they returned.

Before the season, Lake made all of the Huskies learn the lyrics to the UW fight song “Bow Down to Washington.”

“Our fight song is the fabric of who we are, written way back in 1915,” Lake said. “We watched the video of how it came about. These guys are going to end up getting their degree from the UW and playing football for the UW — they need to know their fight song. I think years from now they’ll look back with great memories of knowing their fight song.”

When Chris Petersen was the coach at Washington, many of his Huskies were passionate about the band, including running back Lavon Coleman, who infamously stayed on the field after wins at Husky Stadium to sing the fight song. When Lake took over the helm, he made sure all of his players would sing with the same passion.

After transferring from Texas A&M after the 2020 season, junior outside linebacker Jeremiah Martin wasn’t going to shy away from the challenge.

“Jeremiah, he sang it from the heart, he knew it,” Lake said. “I make all the newcomers know the fight song, because they’re going to get their opportunity in front of the team to sing it. Jeremiah sang it with pride, nice and loud and proud, and he knew every single word. He set the bar really, really high. Everybody after him, they were not very good compared to Jeremiah.”

Last season, without the band in the stands, the Huskies had to create their own energy on the sidelines. Following their three wins at Husky Stadium, the Huskies and their leather lungs belted out the fight song in front of empty bleachers.

Lake tried everything he could to get the band back in the stands, but to no avail.

“I love our band,” Lake said. “We missed them dearly. I tried to have them come out last year during all of the chaos of COVID, but just through protocols, we weren’t allowed to have them. Even for the spring game, I was like, ‘OK, I know we all have to stay 6 feet away, let’s just put the band on the East Field so we can hear them while we’re in Husky Stadium,’ but we couldn’t even get that passed.”

In addition to throwback uniforms and the band tradition, the helmet car — a staple of Washington football from the 1970s until 2011, when Husky Stadium was reconstructed — returned at the beginning of the 2021 season at the insistence of Lake.

With the return of alums and traditions to Husky Stadium this Saturday, the glamour will at long last be at a level Lake has always dreamed of.

“I’m extremely excited about it,” Lake said. “I think our fans will be excited about it. I've heard a lot from the alumni, the 1991 National Championship team, and they are really fired up about it. We are excited to celebrate the 30-year anniversary of our 1991 National Championship. With that throwback uniform, it will be one of many things this year that we do to show those guys the respect and love they deserve.”