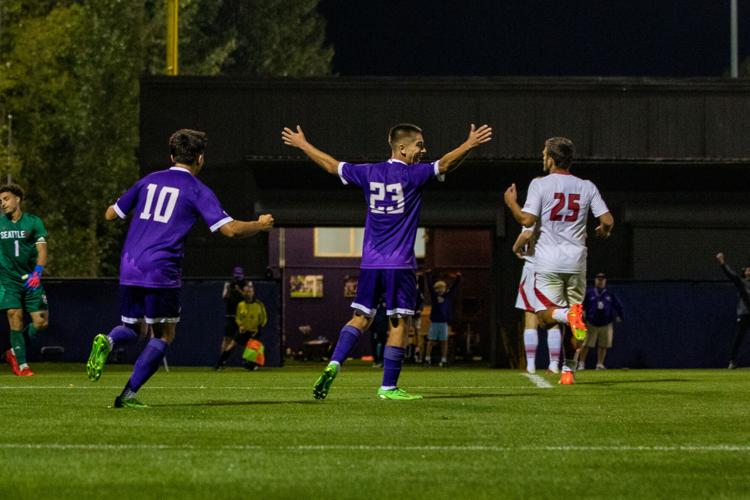 Imanol Rosales (left) runs to celebrate with teammate Gabe Threadgold (right) after the Washington Huskies score at the match against Seattle University on 9/20. The Huskies won the match, 4-0 over the Redhawks. 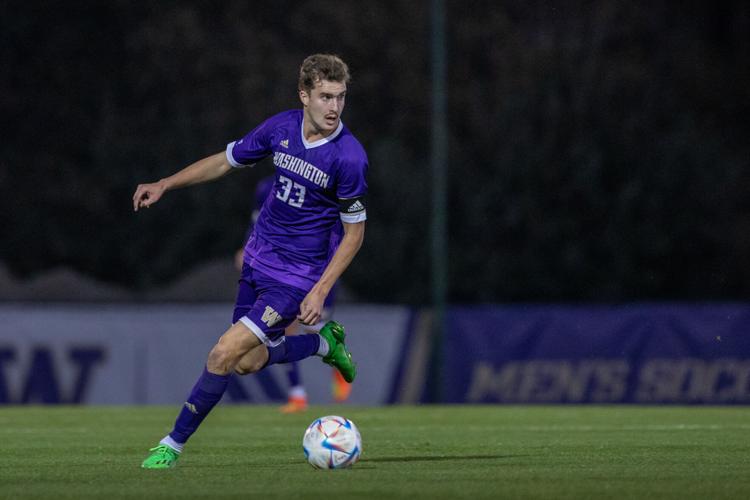 Lucas Meek looks to pass the ball to a teammate at the Washington Huskies soccer game against Seattle University on 9/20. Meek had one goal and two assists on Tuesday night.

In front of a record crowd of almost 4,000 people at Husky Soccer Stadium, the Washington Men’s soccer team treated its fans to a trophy worthy performance on Tuesday, as it defeated Seattle University 2-0 and took home the WAC/101 Club Cup.

“The bigger the crowd, the better,” sophomore stalwart Ilijah Paul said. “It’s a dream for everyone to play in front of a lot of people, and a lot of people came out and supported.”

With a sold out crowd at their back, the Huskies (6-0-1) proved to be the better side from the kickoff, instantly imposing themselves on the Redhawks (1-4-1) and pinning them into sustained pressure built from highly capable distributive defenders.

The opening goal occurred in the 30th minute, and came from a familiar face this season. Paul curled a strike into the bottom right corner of the net, sending Husky Stadium into the first frenzy of the night.

Paul’s place amongst the best players among the country has become undeniable in the wake of a devastatingly prolific beginning to the season. With eight goals in seven matches, Paul not only leads both his team and conference, but is the paramount goal scorer in the nation so far, and will undoubtedly be in the mix for the MAC Hermann award for the premier college player of the season come voting.

Coming into the season with no career goals to his name, Paul has ravaged any and all opposition. With two conference player of the week awards, recognition is deservingly pouring in for the Huskies’ talisman up top.

Washington’s mounting dominance in possession soon paid off again, with redshirt senior and captain Lucas Meek extending the lead to 2-0 with his third of the season on the stroke of halftime. Meek showcased his graceful ability to skip past three defenders en route to a drilled near-post strike besting the lunging SU keeper. Not to be outdone, Meek played a role in all of Washington’s goals, assisting two and scoring the one.

Since their first draw of the season against Air Force on Sept. 11, the Huskies have been prolific to a fault, registering 22 shots in the game. In fact, their performance almost begs the question, “Only 4 goals?” as improper as that sounds. In the two matches since their unforeseen stumble, UW has throttled both Michigan State and Seattle U, winning 4-0 and 2-0, respectively.

The Huskies didn’t let up late, with junior Nick Scardina scoring a bizarre goal in the 79th minute, as the attempted clearance from the SU goalkeeper found only his backside and bounded its way in. As a result of the goal kick, junior goalkeeper Sam Fowler gained his first assist of his illustrious career in goal along with Meek.

Another goal came in the final stages of the match, with junior Jayson Baca scoring his first career goal, coming from a beautifully placed ball from fellow junior Imanol Rosales, and extending the lead to 4-0 in the 86th minute to joyous applause.

“We put on a great performance,” Baca said. “There was a sharpness about us that has come out of those tough times and tough games and by getting out of those rougher patches, we put on performance like tonight.”

Clark’s side absorbed any attempt from its cross-town rivals, with only three shots testing Fowler, courtesy of yet another impressively commanding performance from an ever-improving back line. Still with a zero in the loss column, UW’s defensive foundation has headed a confident start and paved the way for championship aspirations to be a reality.

“Sustaining success is almost harder in theory,” Clark said. “People wanna knock you off, and you gotta show up everyday and take other teams best shots.”

Washington will continue its quest for championship recognition on Saturday, Sept. 24, as it travels to Arizona to face Grand Canyon University at 7:30 p.m.