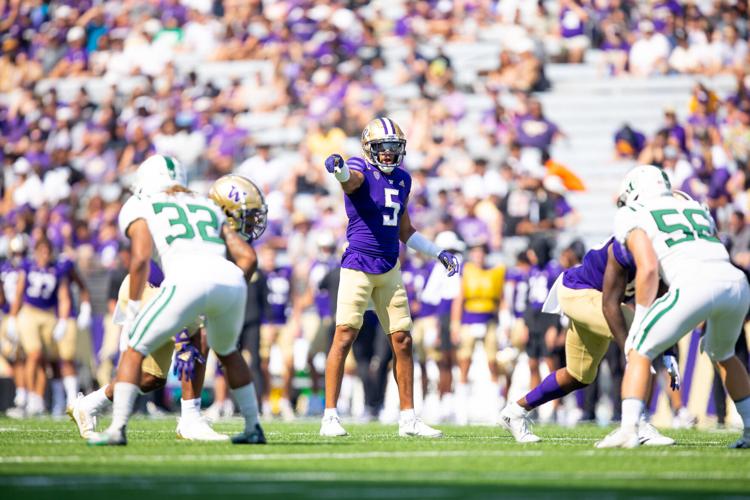 Alex Cook calls out to a teammate during the Washington football game against Portland State on Sep.10 at Husky Stadium. 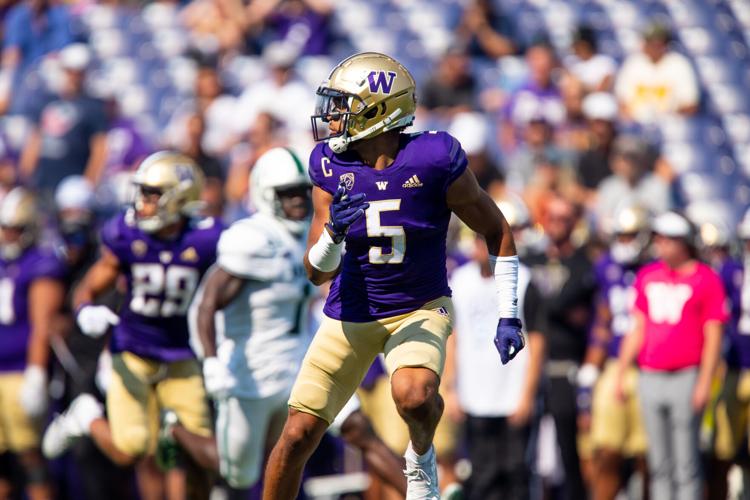 Alex Cook moves to watch his mark during the Washington football game against Portland State on Sep.10 at Husky Stadium.

Washington’s win last Saturday over No. 11 Michigan State came to the excessive delight of Huskies players, coaches, and fans alike.

To Washington safety Alex Cook, the win was a little extra satisfying. In fact, the senior proclaims it as the best game he’s been part of in his six years at Washington.

“The reason why I say it was the best game is because, there was this feeling we had before we went onto the field, that we almost knew we were going to whoop their ass,” Cook said. “We were clicking all week in practice, we were all super confident in our preparation. Dudes were here at 5:30 in the morning — everything was just clicking, everything was smooth. There wasn’t that much critique from the coaches, because they knew we were on our stuff.”

That preparation all led to the most satisfying win of Cook’s college career. It’s understandable why it was so meaningful, provided Cook has seen it all in his long tenure with the Huskies.

A native of Sacramento, California, Cook committed to former UW head coach Chris Petersen in the class of 2017, and has experienced all the twists and turns a college career could entail. Cook signed with the Huskies as a wide receiver, and played his first two seasons as a receiver before switching to defensive back.

The first start of Cook’s college career? The 2019 Rose Bowl against Ohio State.

“Having my first start in the Rose Bowl and then having to make that tough decision to switch to defensive back, it’s been crazy,” Cook said. “I literally had to learn to backpedal again, and I’m literally at the highest level of sports. Having to retrain myself, retrain my mind to do all those things has been difficult. But it’s made me a better person, made me a better football player, and I’m … grateful for it.”

Throughout his tenure, Cook has also experienced the dichotomy of Washington football. He has participated in the highs of a Fiesta Bowl appearance, conference championship, and a Rose Bowl bid. He’s also endured the lows — including 2021, in which a 4-8 season prompted a coaching fire sale.

Now, in Cook’s final season, he hopes that the Huskies have corrected course under their new coaching staff. With a monumental win over the Spartans under their belt, as well as a No. 18 national ranking, there’s reason to believe that they’re on the right track.

But the most prominent milestone of Cook’s tenure at Washington will come off the field, with the birth of his son due in December. Balancing his final season at UW with becoming a father has only served as added motivation for Cook.

“It’s been kind of crazy, just going through camp and going through the season, knowing you have a baby on the way after the season, it’s really cool,” Cook said. “I’m already self-motivated myself, but having that extra motivation, now I’ve got to do it for my son. It's been great, it’s been awesome, and I love it.”

The name that Cook and his girlfriend decided on? “Asa” — identical to fellow Washington safety Asa Turner, who has fought alongside Cook in the secondary since 2019.

In fairness, the child isn’t directly named after Turner. Cook’s girlfriend had never met Asa Turner before the name was decided on. Still, Turner was given another distinction by Cook.

On a car ride to get sushi, Cook unveiled the big news to Turner that his girlfriend was pregnant. It began as an ambiguous car ride, on an unassuming trip to get some California rolls.

What Turner didn’t expect was to be made the godfather, let alone for the child to share his first name.

“He told me he was thinking about it, but I didn’t think much of it at the time,” Turner said. “When he told me the name was going to be Asa, and the godfather too, me and my mom were all [emotional].”

Turner becoming the godfather for Cook’s child has gone a long way in bringing the two teammates even closer together.

“Naming me godfather, naming the kid Asa, all the stuff like that just brings us closer together,” Turner said. “Not only on the field, but once we’re playing together, we start getting lunch and stuff like that, hanging out with each other outside of football.”

As head coach Kalen DeBoer cited, Cook and Turner’s chemistry translates onto the field, and contributes to a well-oiled defensive backs group.

“When you have Asa and [Alex Cook] there in the secondary, the defense does a really nice job,” DeBoer said. “The communication is clean, everything’s really sharp, it just seems like we’re always a step ahead. They know the tendencies, and they do a great job.”

Cook and Turner have a tight-knit friendship, no doubt. But Cook views the entire defensive backs unit as a cohesive, well-bonded group.

“I don’t even know what you would call it, we’re like a SWAT team,” Cook said. “We’re all brothers. [Asa and I], we have a very special relationship. But all the DBs, we’re all brothers, we all hang out, we all do the same thing.”

Overall, DeBoer has emphasized team bonding and relationships among players and coaches. Whether it was boat rides in the summer or “Appreciation Fridays,” Cook noticed a major difference from the previous coaching staff.

“Off the field, I would say we do a lot more bonding,” Cook said. “The relationships we’ve built … [have] been awesome, the culture we’ve built is second to none in the country. I’d be very surprised if someone has a better culture than us. I think coach DeBoer has done a great job of bringing us all together.”

For Cook, those relationships within the team, which in some cases, extend into family, have left UW far better off as a team.

“All the off-field stuff translates directly onto the field,” Cook said. “You build those relationships with the young guys, and they need that. They need to see how the team bonds, they need a feel for the team outside of football. You could put 100 random people who’ve played football before on the football field, they don’t know how to play.”

Whether it’s the revamped team culture or not, the Huskies have seen results on the field so far in 2022, and have re-established themselves as contenders in the Pac-12.

“We’re just flowing now,” Cook said. “We’re starting to get in the groove of things, and the player-coach connection is really good, the player-player connection is the best it’s ever been, so we’re getting things rolling now.”

Things have certainly been rolling for the Huskies in their first three games. And it paid off in the marquee win over the Spartans, in which Cook saw the home fans spill onto the field — a nice change of pace after Washington State’s fans occupied the field after the 2021 Apple Cup.

“Especially after last season, the fans deserved that. The fans deserved to storm the field,” Cook said. “That wasn’t really a moment for us as players, because we expected that win, but I think it was a good moment for the fans, and for everybody in the country to know: we’re coming this year, coming for it all.”

The season is far from over, but if it wasn’t obvious, Cook, one of six captains on the team, still has lofty goals ahead for the Huskies.

“Gotta get the Apple Cup back, I don’t want to leave and not have that. Put that trophy back in the trophy case,” Cook said. “I want these guys to experience a New Year's Six bowl game, that was one of the greatest experiences I’ve ever had. Such a good bonding experience, we have guys that still talk about the Pac-12 championship and going to the Rose Bowl, still talk about it to this day.”

As Cook reflects on his time at Washington, his six years at the school have brought forth a lifetime of experiences off the field as well.

“Definitely going to study abroad [stands out],” Cook said. “I went to study abroad twice, I went to Amsterdam my sophomore year, I went to Rome, Italy, this past summer with a couple of my teammates which was really cool. It definitely brought a whole new perspective of life, a lot on the horizon. A lot of people get stuck in the same place, and that’s all they really know, and it just opens up your mindset to everything.”

Cook, who is a medical anthropology major, has also taken advantage of his five years in the classroom.

“I want to go into chiropractic [treatment],” Cook said. “I wanted to do kinesiology, but UW didn’t offer it, so I kind of wanted to do something that was remotely close to it that fit the football schedule. So, I took the medical anthropology route. We take some biology classes and some stuff that directly correlates with chiropractic school, so that’s why I chose that route.”

In terms of career paths, the NFL doesn’t sound too bad either.

“If I stay the course and do what I need to, I think I have a good shot at the NFL,” Cook said.

Cook has a laundry list of experiences and titles from his long tenure at UW. Perhaps, in the near future, he will add “NFL player” or “kinesiologist” to it.

But, whether or not Cook turns pro, or his dreams of entering chiropractic care come true, come December, the safety will add potentially the most important title of all to his impressive list: “father.”

And, as for baby Asa? He’ll always have a home at Husky Stadium.