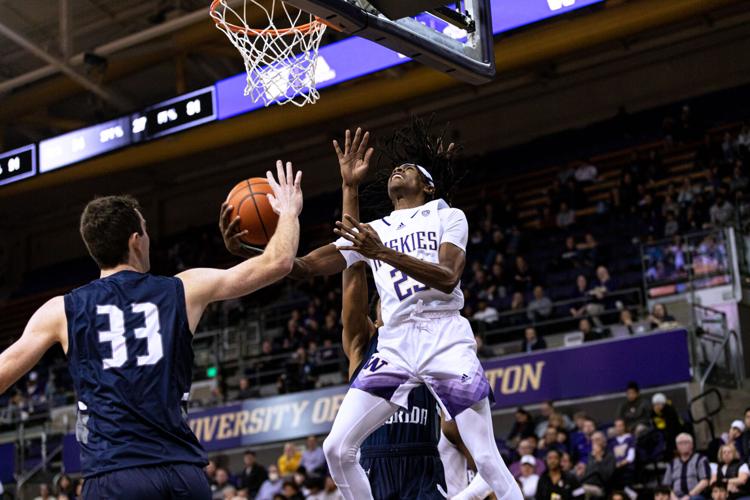 Keyon Menifield goes up for a layup while taking contact during Washington's match against North Florida on November 11, 2022 at Alaska Airlines Arena. Menifield led the Huskies' scoring in his first collegiate start. 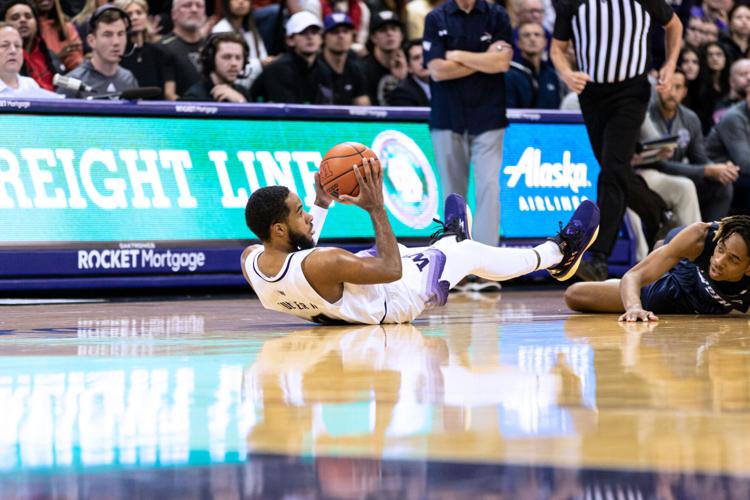 PJ Fuller II looks for a open teammate after diving for a loose ball during Washington's match against North Florida on November 11, 2022 at Alaska Airlines Arena. Fuller found Menifield, who scored off the assist with 15:31 left in the game.

When head coach Mike Hopkins said that the Washington men’s basketball team can go as deep into its roster as it needs to at the very beginning of the season, he didn’t expect to have to test the idea so soon.

Hopkins noted post game that the two are both out with leg injuries and will be considered day-to-day.

“What we do [is] next guy up,” Hopkins said. “We've got a really good team. We gotta get a lot better. But with the type of people that we have on our roster, they're just going to keep getting better and improve.”

Quickly silencing a loud Alaska Airlines Arena, North Florida found a fairly early lead over a frazzled Washington team that wasn’t used to playing together. Freshman guard Keyon Menifield, who made his first collegiate start Friday, took on most of the scoring responsibility early on. Shots weren’t falling for most of the team, especially from the three-point line, where UW ended the half 1-of-10.

“He has the ability to really score but he also has the ability to make others better,” Hopkins said of Menifield. “And that's what we were trying to get [with these] guys. And he did a really good job. Being a freshman and being able to be put in that environment, you know, showed a lot of character.”

Washington got the game back with 15:31 left, when senior guard PJ Fuller dove for a stolen ball and threw an assist up from the floor to Menifield for an uncontested layup. The play brought the teams to a 42-42 tie, and after that, UW never fell behind past the point of no return.

While trading the lead for 10 minutes, Washington’s offense got some life. Increased production from junior center Franck Kepnang and graduate student guard Jamal Bey helped drive several short UW scoring runs, and as assists and rebounds racked up, the gap in the score narrowed.

“I was just trying to let it come to me,” Bey said. “I wasn’t trying to force anything. We just needed to win, so, a few shots I just took confidently and they went in.”

After Bey’s shot, UW stayed ahead of UNF for the remaining time. Dunks and free throws closed out the energetic second-half, which ended with the Huskies ahead 75-67. In the end, the shorthanded team found points from seven players. Menifield led scoring with 21 points.

Hoping to keep the short non conference win streak alive, the Huskies prep to pick back up Monday for a 7 p.m. game against Utah Tech.

Huskies fall in first conference game of the season