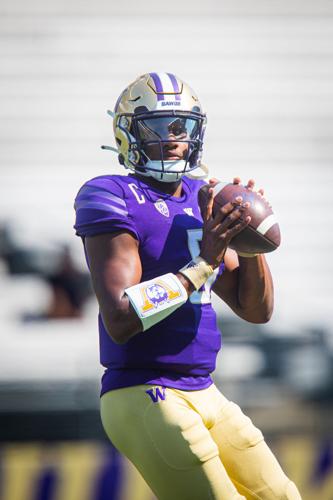 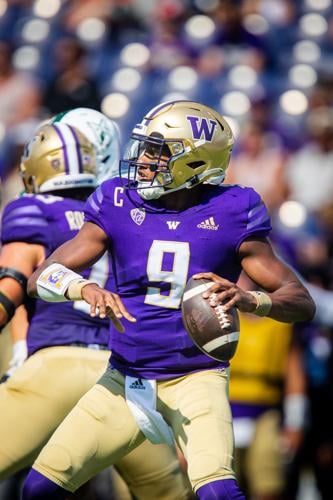 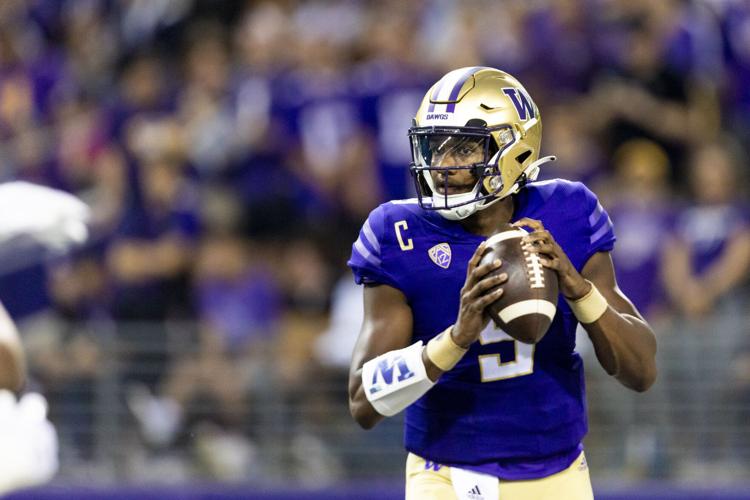 Michael Penix Jr. looks downfield to throw during Washington's game versus Kent State at Husky Stadium on Sept. 3, 2022. 336 days after his previous game, Penix Jr. threw for four touchdowns in his first game for the Huskies.

Over 2,500 miles away from his home in Tampa, Florida, fifth-year junior quarterback Michael Penix Jr. finally stood under center at Husky Stadium.

After deferring the opening coin toss, Washington’s junior safety Asa Turner intercepted a Kent State pass on the first play of the season, sending Penix Jr. and the Huskies’ offense scurrying onto the field faster than they had anticipated.

Penix Jr. likely didn’t have any qualms with the quick invitation onto the turf at Alaska Airlines Field — he had done his due diligence of waiting.

He had waited 336 days, in fact, between competitive football games. The last time he had taken a snap was Oct. 2, 2021, 336 days before the Huskies’ 2022 season opener. When he took the snap, it wasn’t in the purple and gold, but rather the scarlet and white of Indiana.

That snap, 336 days earlier, was a fateful one. In the second half of a game at Penn State, Penix Jr. tucked the ball away to run, absorbed an awkward tackle, and had been dealt a separated AC joint in his left throwing shoulder.

It was his final snap for the Hoosiers, where injuries had unfortunately become a common thread in an otherwise successful four-year span.

One half down, and things were running smoothly. Penix Jr. didn’t look like a wide-eyed freshman quarterback, and instead, showed poise as the Hoosiers hung tight. But on their second drive of the third quarter, Penix Jr. took off for a run and took a big, illegal hit.

Penix Jr. was injured on the play, and just like that, his freshman season was over. While targeting was called on the play, Penix Jr. doesn’t hold any animosity for the incident.

“It was just a freak accident,” Penix Jr. said. “I don’t feel like he did it on purpose. If you watch the film, I tore my ACL while I was running, and I fell down head first just trying to take the pressure off my knee, and that caused him to hit my head. But it’s just football, it happens.”

When Penix Jr. returned in 2019, he did so as the starting quarterback for Indiana, and was off to a hot start with a 5-1 record as a starter with 10 touchdown passes and four interceptions. An injury played spoiler yet again, however, this time to his right sternoclavicular joint, sidelining him for the season.

In 2020, tragedy struck again when a torn ACL put an abrupt end to what had been a spectacular season for Indiana and a marvelous campaign from Penix Jr.

Then, in 2021, for the fourth consecutive season, Penix Jr. was sidelined with an injury, and left with no choice but to wait. Still, he harbors no resentment despite the misfortunes.

Following the 2021 season, Penix Jr. decided it was time to move on, and he entered the transfer portal. There were a wide array of programs available to choose from, but he chose the one the furthest from his hometown (in the mainland, that is).

“At the end of the day, I know my family wants what’s best for me,” Penix Jr. said. “Just talking about this decision and the conversation we had, they felt like it was best for me as well. They’re always supporting me, always going to have my back.”

Simply put, Penix Jr. viewed coming to Washington — a state which he had never stepped foot in — as the best possible business decision. He wanted a fresh start, and he wanted to do so under Washington’s newly minted head coach and old friend Kalen DeBoer, who served as Indiana's offensive coordinator in 2019.

Penix Jr. knew the offense, and he knew he could succeed in the offense. Still, he wasn’t able to trot into Husky Stadium as the undisputed starting quarterback; he had to spend an entire offseason competing with Washington’s existing quarterbacks, sophomore Dylan Morris and redshirt freshman Sam Huard, for the job.

Many fifth-year quarterbacks who came from the starting job at a Big Ten program would scoff in the face of a competition at the place they had transferred to.

But not Penix Jr., who instead embraced it as an opportunity.

“The competition has been great,” Penix Jr. said in August. “It’s a competition, but at the end of the day, we all want what’s best for the team. We all wanna win. So, we’re pushing each other to be better every single day.”

Still, when DeBoer announced Penix Jr. as his starter Aug. 23, it was welcomed by Penix Jr., who was given a chance to head a revamped Washington offense.

All that’s to say that 336 days, a new school, and one quarterback competition later, Penix Jr. certainly didn’t mind getting onto the field a few minutes quicker due to Turner’s interception.

After what felt like an eternity, it was finally time to see his business decision pay off.

And in that first game, it didn’t take long to see it pay off. Penix Jr. didn’t end up throwing a pass on that first drive, but on the very next drive, he threw a 32-yard touchdown strike. It was the first of four touchdown passes on the night for Penix Jr., who was reminded exactly why he made the long voyage to Washington.

“I’ve been playing football since I was four or five, so it’s still the same game,” Penix Jr. said. “I knew the team here, and the things we can do here, so just trusting and just going out there executing, I knew that would happen.”

On Saturday, Sept. 3, after the Huskies scored in all six of their first six drives and won the game, 45-20, Penix Jr.’s long journey was worth the wait.

“It felt good, just great execution by the offense, and we look forward to doing that every week,” Penix Jr. said.

“It was fun to see him … for the first game in here, in a new place, a lot of spotlight on him obviously not just as quarterback, but as a new quarterback, and people wondering what he was gonna bring,” DeBoer said. “He took care of the football, chose times to run when he needed to, extended plays, and threw on the run. Guys did [a] nice job of working back to him at times, and a couple scrambles on third down to move the chains there as well.”

The following game, a 52-6 win over Portland State in which Penix Jr. added two more touchdown passes, further added to his positive view of the team.

“I learned that [this team] is everything I saw all offseason,” Penix Jr. said, as he went on to praise the offensive line, receivers and playmakers, and the general trust for the coaching staff. “Wins happen when you do that.”

Penix Jr. — with his poise and talent as well as off-field leadership — has earned the confidence of fans, players, and coaches. Ahead of a tough test for Washington against No. 11 Michigan State, DeBoer had lofty praise for his quarterback, who has played MSU twice in his career.

“We are very confident about what we could be with him at quarterback,” DeBoer said. “He’s not going to be in awe. He’s played in so many of these games. So you’re comforted, having one of your team leaders and your quarterback in particular being a guy that has played in big games and understands the color of jersey that’s across from him. It’s nothing new to him.”

The results of a tough test against the Spartans remain to be seen. But through it all, Penix Jr. has become the pulse of a program trying to make a new name for itself. With a hot start to 2022, the fans are happy to have him, and Penix Jr. is happy to be here.