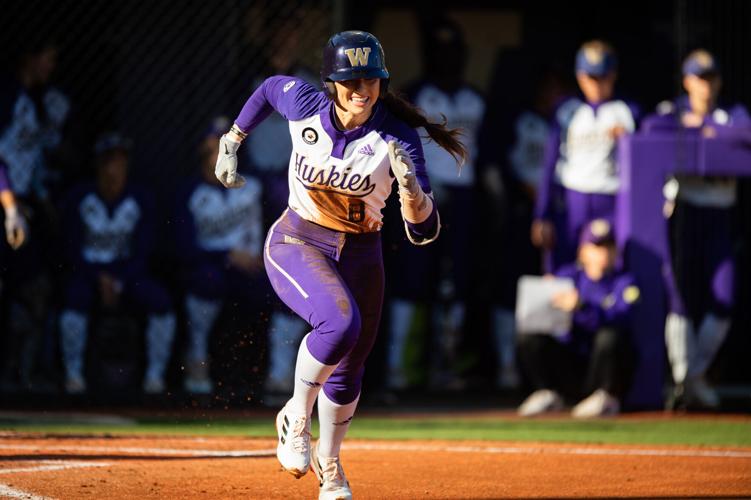 Baylee Klingler makes a run toward first base after a hit during Washington's NCAA Regional game against Lehigh at Husky Softball Stadium on May 20. The Huskies defeated the Mountain Hawks 9-2. 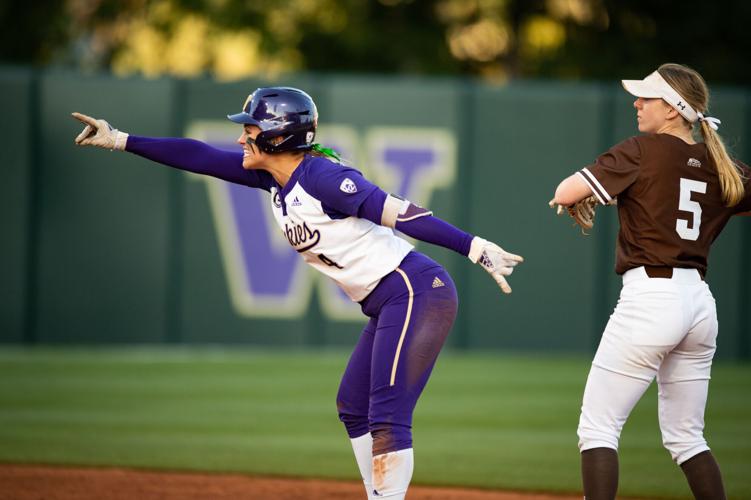 Brooke Nelson points to her team in celebration after a hit at Husky Softball Stadium on May 20.

After four innings of dull offensive play and an error-plagued fifth inning, the No. 13 Washington softball team was unexpectedly trailing Lehigh during the opening game of NCAA Regionals.

The Huskies’ offense finally got rolling in the bottom half of the fifth inning, scoring five runs. A solo home run from freshman Kinsey Fiedler tied the game, then junior Jadelyn Allchin put UW back in front for good with a three-run blast.

UW tacked on one more run in the fifth inning and three more in the sixth and held on for a 9-2 victory to open the postseason.

“For us, the tougher it gets the better we play,” UW head coach Heather Tarr said. “We’re not trying to stoke fires or anything but it takes a little something to get punched and then attack back.”

The bats started slow for the Huskies, with just one hit in the first two innings from Mountain Hawks starting pitcher Katelyn Young.

The Huskies defense forced another scoreless inning in the third, putting them in position to take the lead in the bottom frame.

With one out, sophomore Jenn Cummings did just that in the bottom spot of the order.

Following a strikeout, Cummings launched a 1-1 pitch over the right field wall, hitting her second home run of the year and first postseason hit of her career. The Huskies proceeded to leave runners on first and second to end the inning with a 1-0 lead going into the fourth inning.

A leadoff hit batter was followed by another strikeout by Lynch, but a walk to the next batter led to the first pitching change of the game for both sides, as fifth-year senior Pat Moore took over pitching duties for Lynch, who exits with two hits, two walks, and six strikeouts.

Moore came out of the bullpen firing, striking out both batters she faced and escaping the inning with runners left on first and second for Lehigh.

With two outs in the bottom of the fourth, UW managed to get baserunners on first and second off a blooper single to right field, and an error at second base. Lehigh made its first pitching change of the game with Young getting replaced by Gabriella Nori (11-11), who proceeded to strike out Cummings to end the inning.

Moore forced a groundout to third to start the inning, but a strikeout that was originally called the second out of the inning was reviewed and called safe at first after catcher Cummings hit the runner as she threw it to first. A single to left field and an error on the throw advanced runners to second and third with one out.

The drama started to pick up for the Huskies as they proceeded to make their second pitching change of the night.

Fifth-year senior Gabbie Plain replaced Moore with one out in the fifth, and she forced a groundout to third to prevent a run from scoring.

Plain almost got out of the inning with another groundout, but senior Baylee Klingler rushed a throw to first base.

The throw caused first baseman junior Brooke Nelson to pull her foot off the bag by inches, leading to the runner safely making it to first. During the play, Lehigh managed to send both runners home while the action was taking place at first, and Nelson’s throw home was just too late as Lehigh took a 2-1 lead.

UW committed four errors in the top of the fifth, matching its most in a game since Feb. 14, 2019, against Arkansas. Plain earned a strikeout to escape the inning while stranding a runner on second.

With the Huskies facing a 2-1 deficit in the bottom of the fifth, they looked for Fiedler to set the tone on offense.

After drawing a full count, Fiedler launched a solo shot to right field, instantly clapping her hands as the ball left her bat to tie the game.

The scoring didn't end there for the Huskies.

After drawing baserunners on first and second with two outs, Allchin crushed a three-run bomb to right field, putting UW back in front at 5-2.

“Once I got to two strikes, I knew I couldn’t get too far outside of myself,” Allchin said. “I know I can trust in myself and all the work that I’ve put in… being able to trust myself was really important in that situation. I [was] just trying to make good contact with the ball and get it where they’re not, hopefully, move runners and score runners.”

Nelson followed that up with a double of her own, and freshman pinch-runner Angie Yellen proceeded to score following an RBI single from senior SilentRain Espinoza.

A five-run inning completely turned the tide for the Huskies as they went into the sixth inning with a 6-2 lead.

Following the swing in momentum, Plain and the Huskies continued to deliver the strikeouts and she struck out the side in order to bring them to the bottom of the sixth with the top of the lineup coming up to bat.

UW continued its late offensive surge in the sixth as Klingler crushed a three-run home run to center field, scoring the Huskies’ eighth run in two innings. It was Klingler’s 23rd homer of the year, the most in the Pac-12 Conference.

“This offense is pretty dangerous,” UW head coach Heather Tarr said. “It’s a little bit of a different offense than maybe some of the other ones we’ve had in the past… For us, we don’t think we’re ever out of the game. In general, you might think, ‘Where is [the offense]?’ You saw it, there it is.”

Plain closed out the game in the seventh, striking out two more as UW went on to win its opening game of NCAA Regionals in style. Washington pitchers combined to allow two unearned runs on five hits, walking two and striking out 15.

With the 9-2 victory Friday, UW will host Texas on Saturday at 2 p.m., with the winner advancing to the Regional final on Sunday, and the loser playing in an elimination game Saturday at 7 p.m.