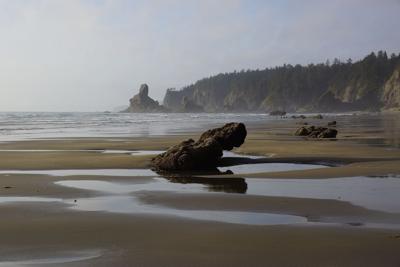 For the Quinault Indian Nation, home has existed for thousands of years on the lands by the river banks. The nation uses the coastal area as a bench mark for their community, however, due to climate change and rising sea levels, communities are forced to reconsider the definition of home as they relocate to higher grounds.

A UW study published in March analyzes how rising sea levels affect public health and those forced to relocate. The researchers looked at how mental health, sanitation, food availability, water supply, diseases, and health care access are impacted by the decision of the community to completely relocate.

“We know that climate change will force some communities to relocate, due not only to sea level rise, but also to extreme heat, water scarcity, and destructive storms. It’s extraordinarily difficult for us to contemplate and plan for relocating from the places we call home,” Howard Frumkin, professor of environmental and occupational health sciences at the UW School of Public Health, said. “We hoped that this study would help shed light on the process and perhaps facilitate it for future communities that need to relocate.”

One of the crucial aspects of climate change includes the rising sea level, which is estimated to rise between 0.3 and 1 meters by the end of 2100 due to thermal expansion of seawater and melting glaciers and polar ice. These rising sea levels affect coastal communities by eroding their land, especially when strong storms and high tides rip through the towns. Many of these indigenous communities are in isolated settings, such as a small island, and have few resources. Therefore, the communities are compelled to relocate.

“Real success would be if they got a better situation. Did they get better housing, sanitation, education, or food, some resources, and community goods,” Dr. Andrew L. Dannenberg, an affiliate professor in the UW School of Public Health and College of Built Environments, said. “Again, remember these are native cultures and we are not the ones to determine what they consider a good life. This is how they live and they are better judges than we are on what the quality of life is.”

Researchers looked at peer papers, news reports, and other reputable literature to analyze the effects within eight communities; four located in the North and Central America and four in the South Pacific. The population of each group ranged from 60 to 2,700 people and included villages from Washington, Alaska, Louisiana, Fiji, Papua New Guinea, the Solomon Islands, and Vanuatu.

By exploring case studies as well as peer-edited literature, the researchers pieced together whether the relocation was a positive or negative experience. They looked at each community’s background, culture, and current issues regarding public health and the environment.

“What we found is that not a lot of work has been done to look at those public health implications, but there are a lot ranging from mental health to social capital and the basics of livelihood like getting enough to eat, water, and sanitation,” Dannenberg said.

The study looked at the impacts of relocating on mental health as well. Forcing someone to uproot from their home may lead to mental health problems such as anxiety, depression, substance abuse, and suicide, especially among people who feel deeply connected to their land.

“Migration is a very stressful activity and what [we] would anticipate [is] that there would be mental health activities associated with migration, and it was excellent that the study was able to gather information about that,” Kristie Ebi, professor and director of the Center for Health and Global Environment, said.

The Quinault Indian Nation includes the Quinault and Queets tribes, descendants of five other nations, and consists of 660 people located in Taholah. The area experiences severe flooding and is at risk of tsunamis and serious storms. The village received the social and economic development strategies grant for $700,000 in 2013 from the Federal Administration for Native Americans. With the money, the community created a plan to relocate uphill and create houses, shops, schools, and community centers.

One hurdle, according to the senior planner for the Quinault Indian Nation, Kelsey Moldenke, is getting people to want to move up the hill. He argues that it is hard to justify the move to people who have already paid off mortgages and invested in homes in the lower village.

“Some people are not going to want to move from their home. It is a bit of a challenge to get people to want to move,” Moldenke said. “Even though it is only a quarter or a half mile away, it is different and it is hard to exactly note what it will be like.”

The ability of the community to move not very far and to a higher elevation allows for a greater chance at success.

Another major challenge is finding enough funding to complete and build all of the infrastructure. While Moldenke notes that they are further ahead of other nations in trying to relocate, with the first building under construction hopefully this year, the funding is not enough.

“How fast the relocation goes will be based on how fast we receive funding to do these various infrastructure[s] and building projects because they are not cheap,” Moldenke said. “It has put a real strain on the nation because they have other responsibilities to its people and services to provide beside relocation.“

Ebi said the study highlights the use of science as a tool to help aid us in the future.

“Science can give us information that can provide us insight into possible futures. We can try to work on the environment, services, or whatever needs to be done so people can live there longer and more successfully,” Ebi said. “Then, when it looks like those actions are insufficient, we can start planning.”